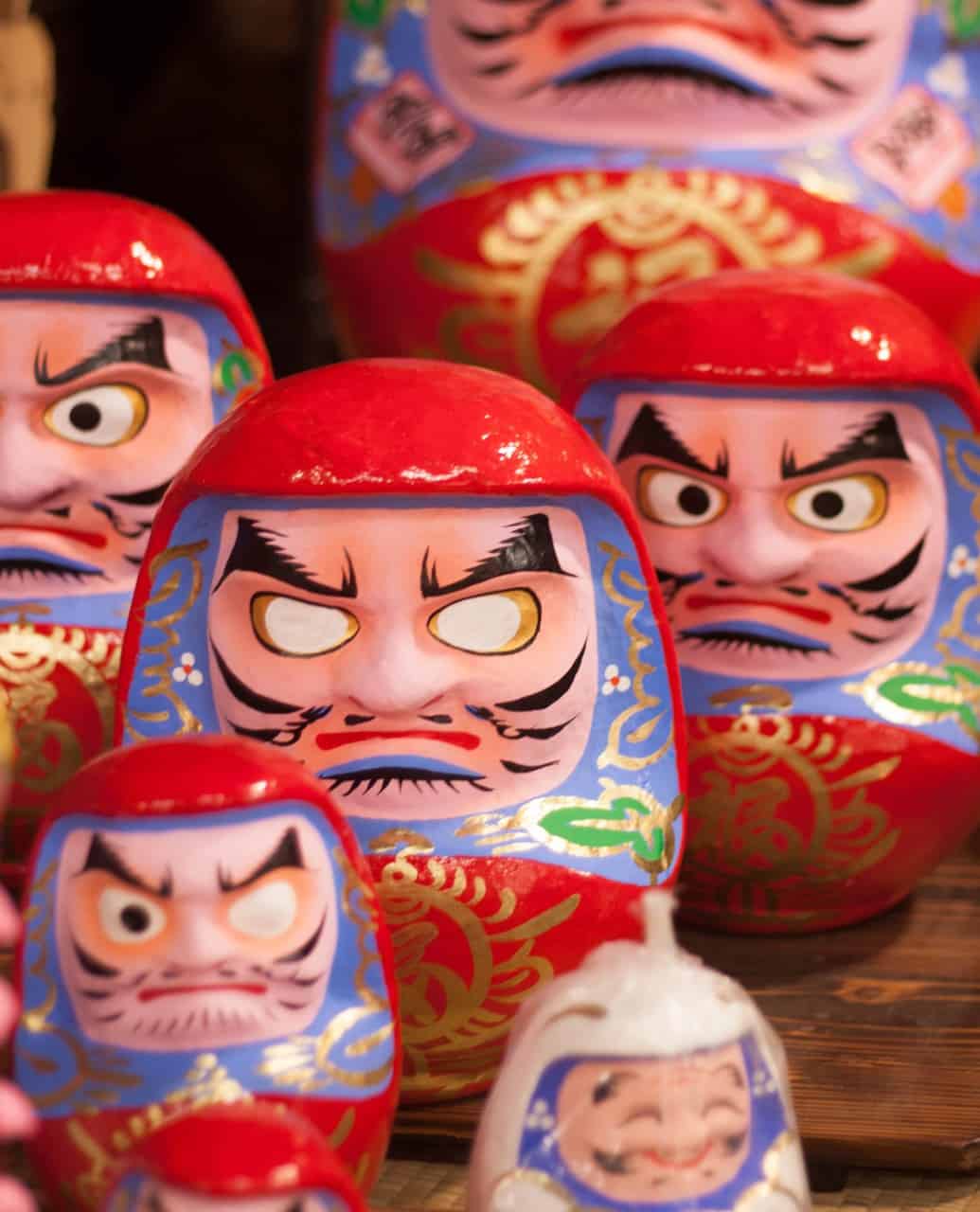 During the Edo Period, this area was part of the Miharu Clan territory, and the local toys at Takashiba Dokoyashiki Doll House are often referred to by this name. The shop where I visited this time is called Takashiba Dekoyashiki’s Hikoji Mingei. Deko refers to a specific style of wooden craft, and yashiki means house, or workshop, so Dekoyashiki refers to the village of traditional doll workshops. 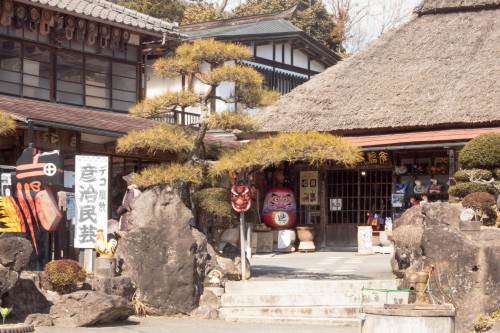 The Takashiba Dekoyashiki Workshop is the oldest workshop in the area, and boasts a 300-year history. Moreover, the building of Hikoji Mingei is very old house with 400-year history. The shop is famous for the design and production of two local dolls called Miharu Koma and Hariko doll. Over ten generations of toy makers have passed down their craft to their children, and the shop has continually adapted and produced new and unique toys and folk crafts throughout their long history. 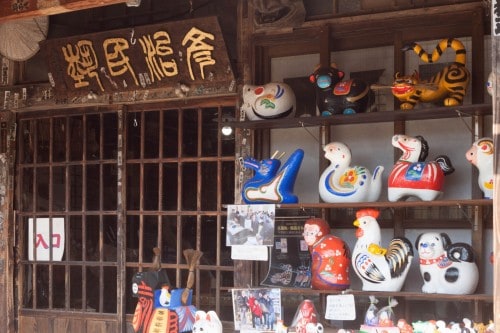 The Miharukoma doll was featured as a limited time New Years stamp in 1954, and the toy makers have been recognized numerous times for their quality products, and beautiful toys. 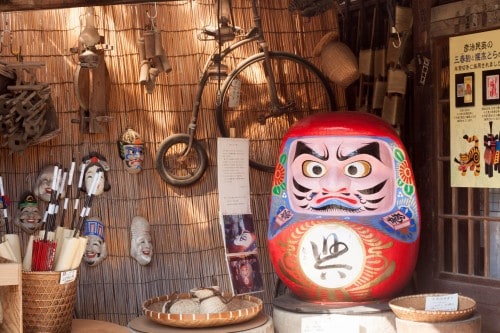 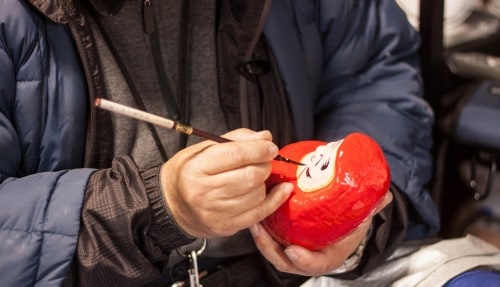 At Takashiba Dekoyashiki there are four different workshops including Hikoji Mingei. The shops produces a number of different toys and crafts but a couple of the more famous among them are the Miharu Koma doll, a small wooden horse with an interesting back-story, and the Hariko doll, which is made from a type of Paper Mache. 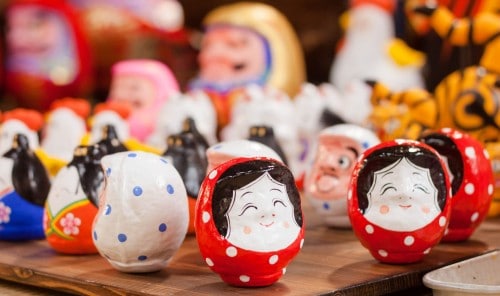 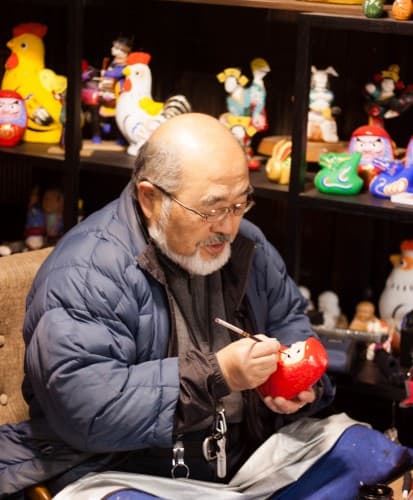 The legend says that around the 8th century a group of bandits were harassing villagers in Fukushima. Shogun Sakanoue-no-Tamuramaro planned to drive the bandits away, but before he left to do so, the founder of the Kiyomizu Temple, Enchin; carved five wooden Buddharupas to wish him luck on his journey. From the scraps of the Buddharupas he also carved one hundred wooden horses. Tamuramaro brought these wooden figures with him on his journey as he and his soldiers made their way to Fukushima to drive out the bandits.

When they arrived they were exhausted from the long journey but had no time to rest before the battle began. The tide of the battle was beginning to turn against them when suddenly one hundred saddled horses appeared as if from thin air. The soldiers quickly mounted the horses and won the battle. Soon after the fighting had finished, the horses disappeared.

The next day, a local man found a small wooden horse on the ground. The horse appeared exhausted as if from a long battle, and bore the mark of Tamuramaro, the Shogun who had been so devoted to Enchin. The local people believed that these wooden horses had helped win the battle and began carving copies of the wooden dolls.

It is said that children in the area who receive a Miharuko doll as a gift grow up healthy, and strong. The dolls are thought to bring victory, blessings, and cure diseases. 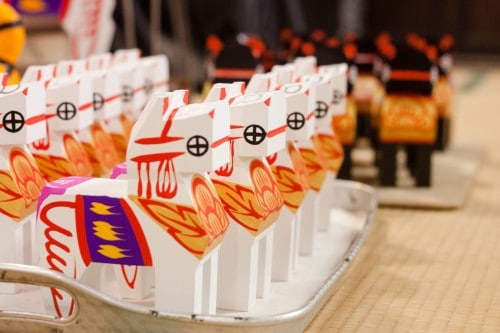 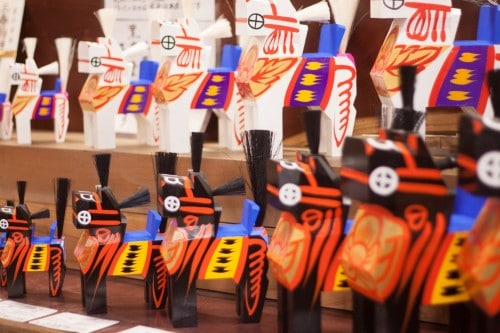 The Hariko dolls are created using a wooden frame, which is then coated in a Washi (Japanese paper) at the Takashiba Decoyashiki Workshop. The dolls are very organic in their design, featuring soft and seamless edges, and come in a variety of designs. The more popular designs are the twelve Hariko Zodiac dolls, one for each of the Chinese zodiac years. 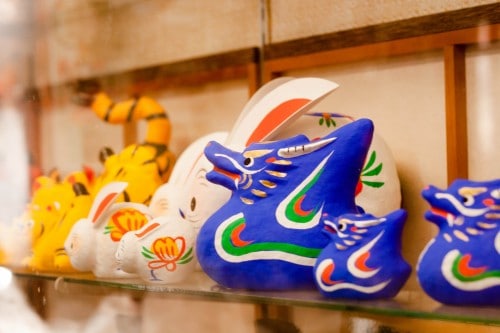 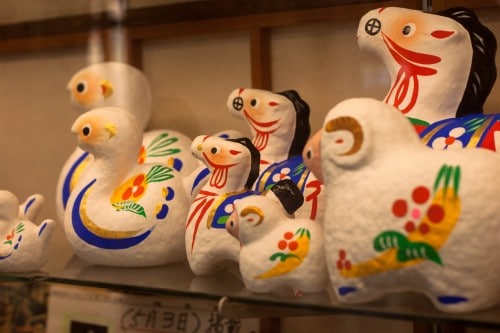 Painting Your Own Doll 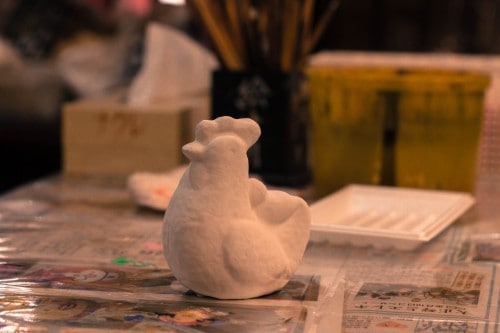 A large number of premade paper dolls are organized by type next to a small craft table in the main room. You can choose between Chinese horoscope animals, the traditional Miharu horse shaped doll, or the ever popular Daruma doll. 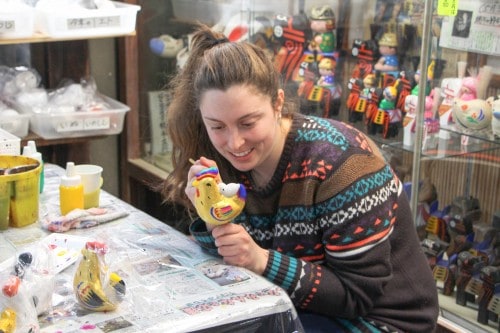 After you have chosen, the shopkeepers will give you a short tutorial on how to hold your doll (it is suspended on a stick, to keep the paint from smearing or staining your hands), and how to dry your doll (with the hairdryer hanging nearby). After the introduction they give you free reign of the paints, only interrupting your work in order to engage you in friendly conversation. 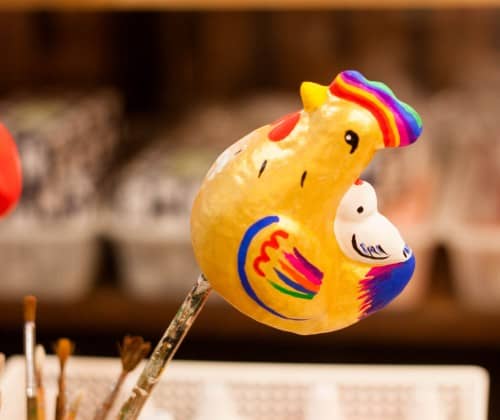 Painting your doll usually takes about an hour, and if your hand gets sore, take a break to peruse the shop’s other items and handmade crafts.

The painting classes can also be brought to you with some advanced registration. Takashiba Dekoyashiki offers their painting class at events and small gatherings outside of their main workshop, so be sure to book this option if you would like to use their services for larger groups. You can contact them on their website for more information.

Take the Fukushima Kotsu Bus Bound for Koumori via Douzaka/Nishida Gyousei Centre. The bus costs 620 yen and leaves from the number 6 platform out of Koriyama Station’s West Gate. Get off the bus at Maruyama Bus stop. It’s about 1.5km from the bus stop to Takashiba Dekoyashiki (about 20 minutes walking).

Or take the Banetsu Tou line train bound for Ono-Shinmachi to get off the train at Miharu station.(12 minutes / ¥240). From Miharu station, take a taxi to Takashiba Dekoyashiki (about 10minutes, around ¥1000)