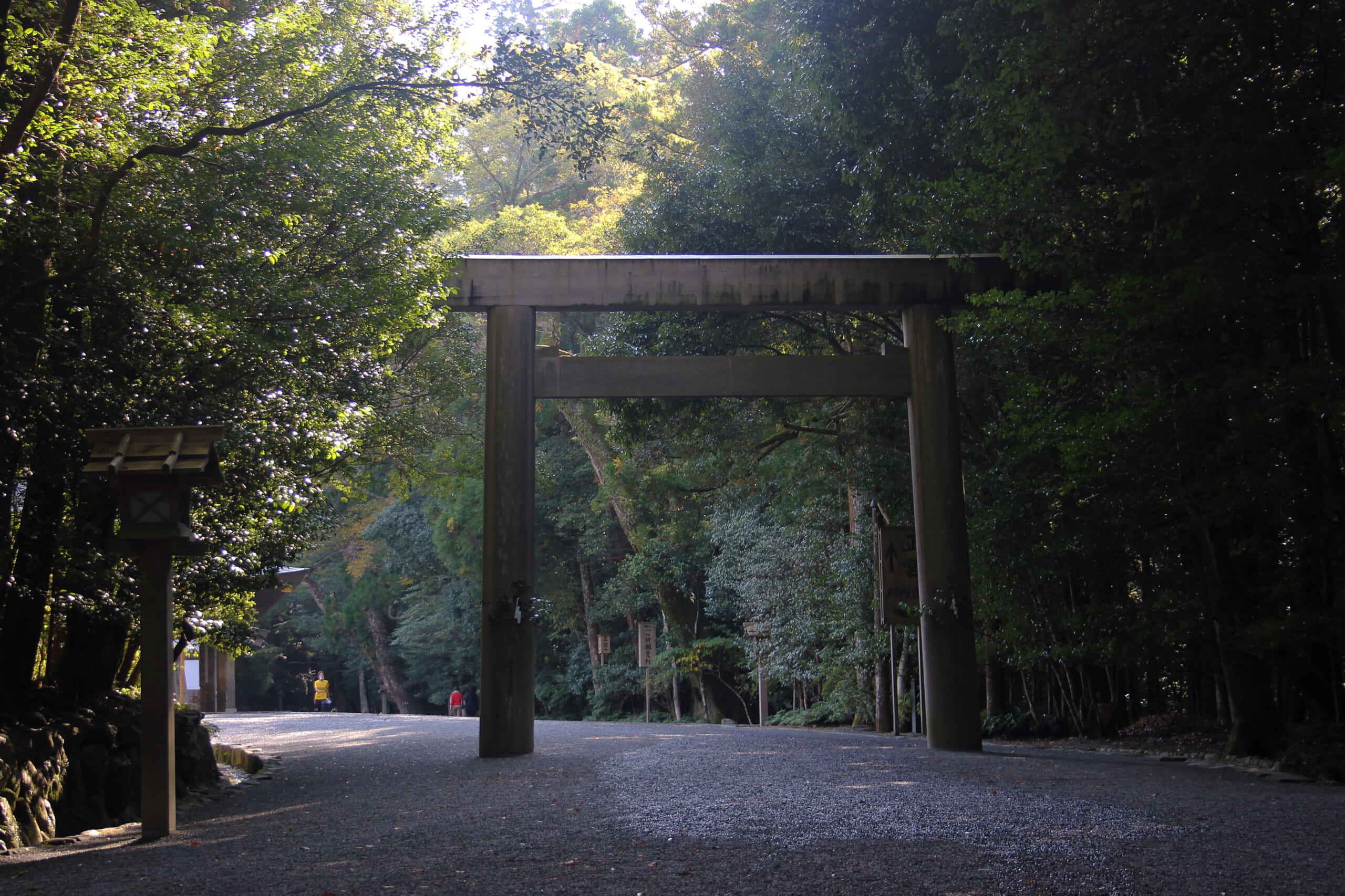 Ise Grand Shrine is the most important shrine in the Japanese Shinto religion. It is a place of pilgrimage visited by millions of people every year. For foreigners visiting Japan, the Ise-Shima region offers a journey into the spiritual heart of the country.

When the Japanese refer to Ise Jingu, they are actually referring to 125 shrines around and within the city of Ise (伊勢市, Ise-shi). It is customary to visit at least two of the most important shrines in this order: Geku (外宮, Gekū) and Naiku (内宮, Naikū). Geku is located in the city and is visited first. Naiku, the largest, which is located slightly south of the city, is visited next. So, follow me for a day-long adventure discovering the Ise Jingu Shrine and other important places in the city!

The shrine of Geku is dedicated to the goddess of food, Toyouke, who is responsible for feeding the deity Amaterasu in the inner shrine. But Toyouke’s role is also to look after the welfare of humans. She provides them with food as well as clothing and shelter.

According to Shinto beliefs, the sun goddess Amaterasu ordered a shrine to be built in Toyouke’s honour, as she needed her help in Ise. Amaterasu appeared to Emperor Yuryaku over 1500 years ago to express her will. Toyouke was then summoned and left the province of Tanba (now Kyoto).

The Geku Shrine, also called Toyouke Daijingu (the great shrine of Toyouke), is hidden in the dense forest of a park. As we passed successive torii gates and giant cedars on our way to the shrine, we felt miniature in comparison— almost as if we had shrunk in size. Inside the park are the main shrine and smaller ones built in the same architectural style. Sober and imposing, the buildings are made of wood, and the edges of the roofs are covered with gold.

My guide told me that they are completely rebuilt every 20 years in the desire to allow the resident deities always to be able to inhabit a beautiful, new shrine. This can also be seen as a link to the fundamental Shinto beliefs of the cycle of life and the renewal of nature. Indeed, a gravel area of the same size is left empty next to each building. It is strictly forbidden for anyone but the imperial family and priests to enter the main shrine interior. I could see its golden roof in the distance behind the walls. The reconstruction ceremony called shikinen-sengu is the only opportunity for the public to approach this revered place. Be patient; the next one will take place in 2033.

After visiting Geku, I slowly headed towards Naiku Shrine. I had planned to stop at the Sarutahiko shrine on the way. When I arrived at the gate, I had the chance to meet a priest who gave me a revelation. Did you know that you should never take a picture of a shrine while facing it? To not disturb the deities who reside there, you should place yourself diagonally so as not to block their path.

I noticed a real educational will of the sanctuary, which strives to initiate visitors to observe good manners in such a sacred place. For example, the English brochure briefly explained how to pay your respects to the kami (Shinto deities) or why you purify your hands.

The shrine is dedicated to Sarutahiko, the deity of guidance. It is said to be held by direct descendants of Sarutahiko since its inception.

Tasting Ise-Udon in the Pedestrian Streets

Leaving Sarutahiko Shrine, I returned to the Oharai-Machi shopping street a minute away. The shops lined with traditional wooden fronts made me feel like I had travelled back in time in this picturesque landscape. If we continued down the street until the end, we would arrive at the Naiku shrine. But before that, I wanted to take a lunch break and try a local speciality. Since one of the nicknames of the region is the gourmet’s paradise, there is no shortage of specialities! But for an udon lover like me, one of my greatest pleasures is to taste the udon speciality of each new Japanese region.

So I turned right to take on Okage-Yokocho street, where a stone Maneki Neko showed me the way to go. In this street, equally pretty, it is where the Fukusuke restaurant (Ise-udon) is located. The establishment offers dozens of recipes, but I ordered a classic: tsukimi-udon — a raw egg on top of hot, just-drained noodles, bathed in katsuo-bushi (dried bonito shavings) broth, and sprinkled with fresh green onions. Ise udon is known for its unique texture, thick but melting in the mouth, and not too firm. They are covered in a dark, syrupy broth. I was expecting a robust and salty taste, but instead, it was mild and very fragrant. At Fukusuke’s, the broth is homemade and is extremely popular! A word of advice, go a little earlier to avoid the long queues (though rest assured, the udon is well worth it!)

Walking back through Oharai-Machi heading south, I arrived at the Ise Jingu Naiku shrine entrance, also called the Kotaijingu. The colossal torii that stands at the entrance frames the sunrise. This shrine was built in honour of the sun goddess Amaterasu. This deity is considered the ancestor of all successive Japanese emperors. She was originally enshrined in the imperial palace. In the late 1st century B.C., during the reign of the 11th emperor Suinin, she is said to have appeared to Princess Yamatohime-no-mikoto, who had been searching for the most appropriate place to dedicate to her, and told the princess that Ise should be that place. Since then, the Kotaijingu has been consecrated to her there.

It is the most important and sacred place in the entire Ise Jingu complex. We enter the park by crossing the Uji Bridge, which marks the boundary of the holy area. Just as in Geku earlier, one passes numerous torii gates that stand alongside the tops of giant trees. But within the Naiku, everything seemed even more prominent, even more impressive. Here, the main pavilion is protected by four rows of walls, and only the imperial family and priests are allowed in. Walking through the forest, you will see its golden roof between the trees.

You can go in front of the enclosure that hides the pavilion to pay respects to the goddess. Also, like most large shrines, both Geku and Naiku have a kaguraden. You may have already noticed this building in a completely different architectural style, where you can buy lucky amulets. Here, pilgrims can make kagura offerings, rituals of song and dance, to pass on their prayers.

Where to Stay on Ago Bay

To spend the night in the Ise-Shima area, I was recommended this hotel on Ago Bay (英虞湾, Agowan): the Shima Kanko Hotel – The Classic. It is located on Kashikojima, one of the many islets in Ago Bay, south-east of Ise Jingu. Pearl farming thrives in the bay.

It provides all the comforts of a 4-star hotel in the middle of the magnificent landscapes of the Ise-Shima national park. The hotel opened in 1951 and is celebrating its 70th anniversary this year. In 2016, the hotel attracted worldwide attention when it hosted the Ise-Shima G7 summit.

As I arrived late afternoon, I asked the staff where the best place to watch the sunset was. They told me to go to the guest lounge on the second floor. They also offered to take me to the rooftop garden of a nearby building that can be reached by car: the Shima Kanko Hotel – The Bay Suites. But as it was getting dark very quickly, I thought it would be wiser to stay in the lounge and enjoy the last rays of the sun. So I savoured this magical moment on the terrace, looking out over the islands and pearl oyster beds bathed in pink light.

The lounge’s bar has a buffet of hors d’oeuvres open until 22:00. There is also a library. For dinner, you can choose to book a table at La Mer, which, as the name suggests, offers local fish and seafood specialities cooked in the French style. Or else you can sit down at the Yamabuki teppanyaki restaurant, where the chef prepares the freshly caught seafood by cooking them in front of you.

You can get to Ise from Osaka, Kyoto and Nagoya by taking a Kintetsu line train to Iseshi station. It takes about 2 hours by train from Osaka and Kyoto, and 1 hour 20 minutes from Nagoya.

Open to the public every day for free. Opening hours vary according to the season.
The nearest train stations are Ujiyamada and Ise-shi stations. The Kintetsu Line serves Ujiyamada Station, and Ise-shi Station is served by the Kintetsu Line and JR Sangu Line. By car, you can park in the temple’s free car park.

Opening hours vary according to the season.

The Japanese say that you should visit the Ise Shrine at least once in your life. This itinerary will take you through the highlights of Ise Jingu in one day. Do not hesitate to add this destination to your next trip, whether you decide to make a one-night stopover while travelling between Tokyo and Kyoto or whether you want to spend more time in Mie Prefecture.

Designer and kimono upcycler from France, living in Japan since 2014. I came with the idea of spending a year in Tokyo... and never left since! I quickly became passionate about traditional Japanese textiles, and the beauty of landscapes still amazes me every day. After living in Tokyo, Osaka and Miyazaki, I now live in Arashiyama, Kyoto. When I'm not behind my sewing machine, I like to hit the road and explore the region to discover local crafts and other hidden treasures.