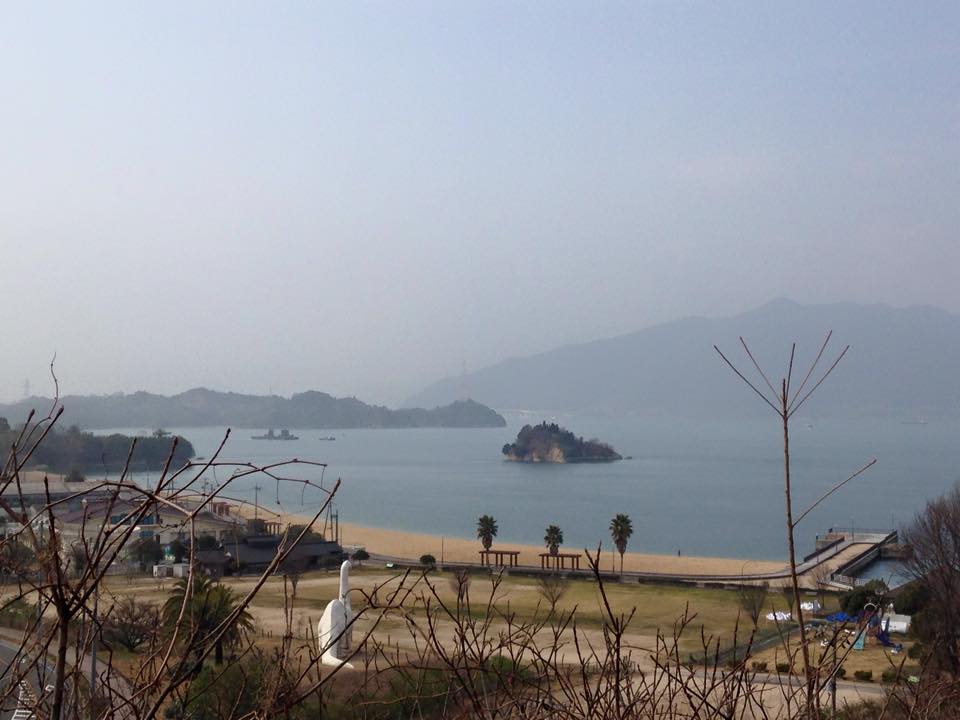 From Hiroshima prefecture’s Onomichi, we crossed into Innoshima over its eponymous bridge. There was an unmanned toll booth, with no attendant there that could clarify the 50 Yen payment. We continued spinning forwards.

The cycling road coiled downwards bunched up against bamboo, like prehistoric forests. How fitting that a dinosaur soon appeared down below. 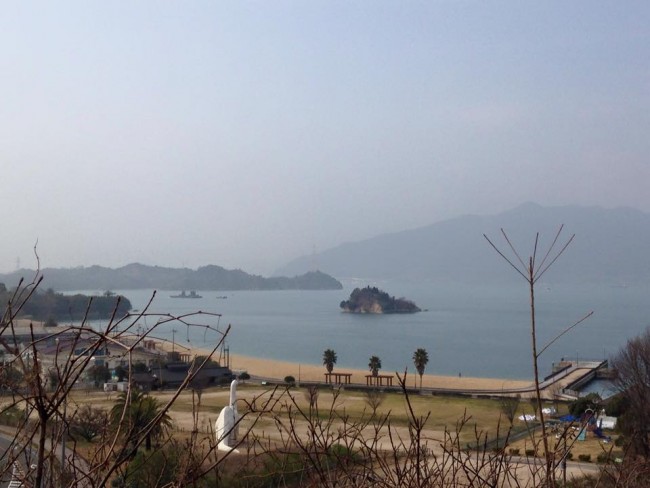 Innoshima island hosts this dinosaur in Innoshima Amenity Park, beside route 366. It seemed old as how colorless it was. Its model showed a drooping dragging tail more like a dated monster movie. It seemed forgotten to February, while the whole park held onto an immense bubble as if bubbled from the Earth’s center in unpopped preservation.

The sensation of a world out-of-time lumbered alongside, cycling under high-standing palm fronds. The sun was smothered behind clouds, time tracking away.

Off and away from the park we slowed to a crawl past the interesting smells of Hiroshima metalworking facilities.  The metallic tang did not scrap our experience. Alternating with industrial sights were orchards alongside fruit fields.  Seto Inland Sea is known for its citrus, and the island yuzu truly grew plump.

We curled to the left, finding a sea-level field. Down among these freshly greening leafy greens, our first cycling Innoshima island cycling road climb was a necessary lift. Coming upon the widest field I had seen, with field hands tending its grounds, we lent our feet climbing a hill that sloped up underneath the high-grade rising road. The Shimanami Kaido’s many kilometers aren’t all lightly tread!

On the top we found a splayed road. Low fruit-bearing trees crowded silently on a farm that contained the roadway holding an old forest’s possessive disposition. It watched woody, wondering about wayfarers cycling through and why they might not stop to share a quiet moment overlooking Innoshima island. 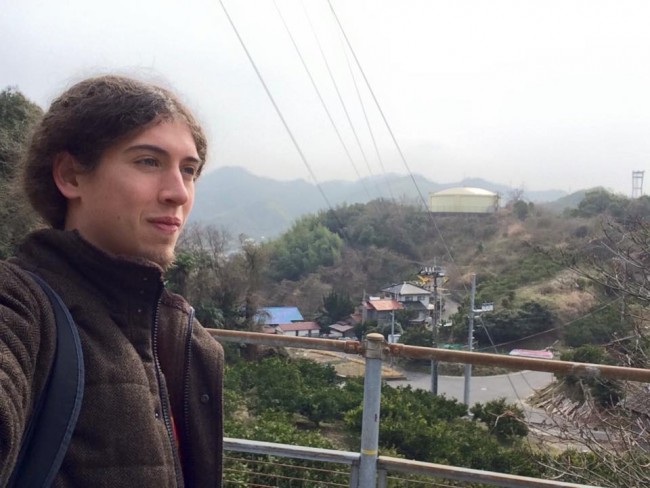 It was a good place for quiet gazes. Such a hill as craned up to kiss the sun casts an intimate look between heaven and earth. The road sloped down into a valley village; the sky wore a cloudy face, that yet intimately bore broad features towards Innoshima. While admiring the scene, a lone bell rang a note out across the Hiroshima island town.

After marveling at head-sized yuzu bending branches low, we went wheeling into town. It was another town with buildings occupied more by thick island humidity than people. Some students walked by, recounting a day in their teenage lives. Although situated within an open valley, this town felt sheltered away.

We banked left at a t-intersection. Upwards, away from town was a pagoda peeking into the valley and, I imagined, towards unseen Seto sea. It was a watchful dragon, wrapped around its island. We followed its gaze… to a convenience store.

We pumped onwards, up another hillside and poled-up netting post-marking a golf range: Innoshima Sports Park.

The road darkened, light concentrating a peephole point through a tunnel ahead. While cycling through, the darkness grew – a quick brake would’ve upended us. So, it was a rapid run past a metallic metalworking tinge and the occasional moped vapors.  It was back to the joy ride!

The next island village was not entirely bike-friendly, however. Bending in, we were wheel-to-wheel with some friendly fenders. The margin at left was houses encroaching the road, so we rode the left road’s surface marking. An area was marked as a place of frequent accidents. I suppose the tortuous Shimanami Kaido route couldn’t be complete without another obstacle, so we inched by with solemn reverence. 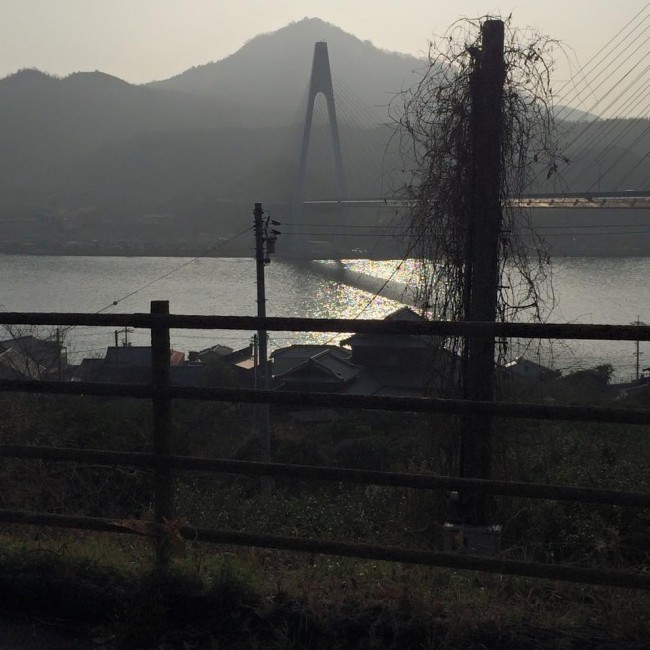 The next bridge – Ikuchi bridge – loomed large. An island knoll over the strait notched up Ikuchi bridge’s height, making over-sea immensity over an already minuscule seaside village. Shimanami Kaido cyclists should visit for the sea, the islands, and the bridges.

Under the thick cement went the sea and us men. Another clump of buildings huddled the green hill like berries on a bush. We swung towards green growth with our metal instruments.

We clipped air towards the hill. This route was the bicycle byway up to the bridge; a welcome change in gear cycling away from that perilous roadside squeeze back in town. This Hiroshima road called to mind the mountain scaling green summer roads back home in New Hampshire. The incline’s grade wasn’t that sheer, and looking out over Ikuchi bridge really obfuscated any sensations of muscular tension. It was a beauty between sleep and deep.

The path reminded me at times of an estate garden modified for cycling. Wispy vines ensconced telephone poles, while the grand bridge stood like a portal for a naturally ages-refined house. We stamped our feet at its island doorway, rushing in open wind over Ikuchi bridge.

Ikuchijima island was a long way, and time arced with Ikuchi bridge’s gravitational physicality. Finished cycling, we dismounted at the other side. Empowered by the footwork flexing, we heaved our bicycles overhead, feeling a champion’s glory. 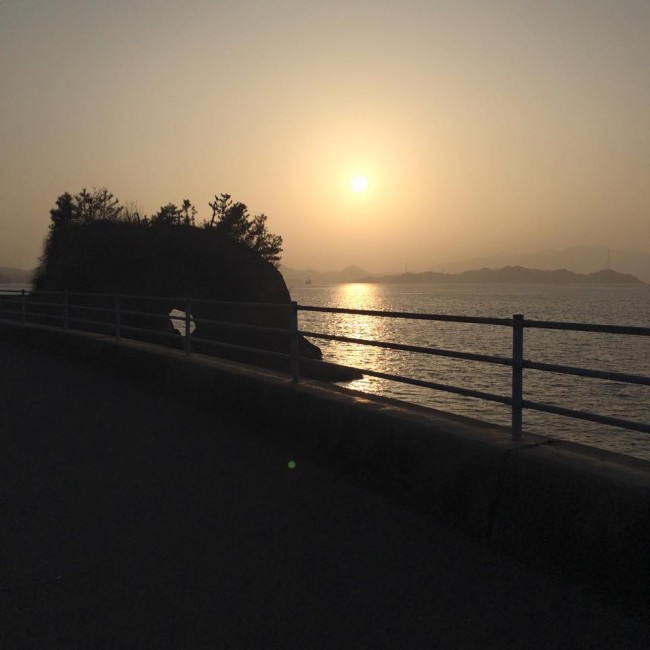 To enjoy cycling the Shimanami Kaido:

Shinkansen from Shin-Osaka to Fukuyama, JR Sanyo line for Mihara, get off at Onomichi. This takes 105 minutes, while costing 7770 Yen.

Shinkansen from Hiroshima to Mihara, JR Sanyo line for Fukuyama, get off at Onomichi. This takes 58 minutes, while costing 4750 Yen.