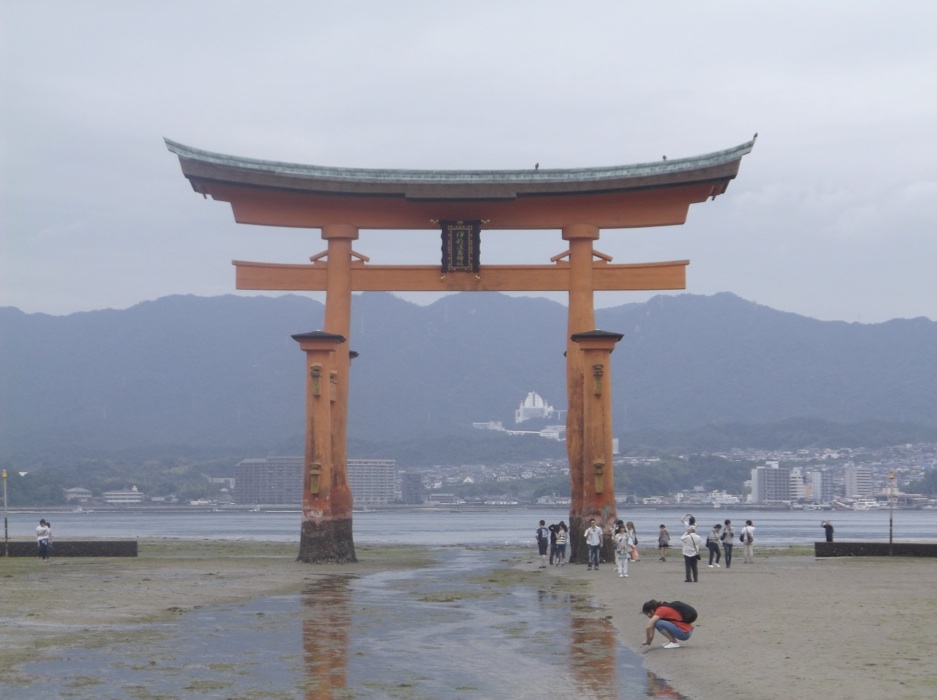 The Wonders of Miyajima, Hiroshima

The Itsukushima shrine is located on Itsukushima, better known as Miyajima, and it is perhaps one of the most famous sights of Japan. Known for its “floating” torii gate, the shrine is often featured in pictures to represent Japan in travelogues and travel agencies. I had the pleasure to visit it as it was a must-see for my time in Hiroshima.

I was taking lodge in the Naka ward of Hiroshima city, very close to the Heiwakinen Peace Park, which had me very close to the other major spots of Hiroshima, and thanks to Japan’s amazing train system, Itsukushima shrine really was not too far off either. Just a 20 minute ride on the JR San-yo line will take you from Nishi-Hiroshima station to Miyajimaguchi station, and only at 320 yen.

In the humid heat, I sat on the train, counting the stops as I went, for fear that I may somehow forget the station name.

From the station it was a short walk to the dock, past a statue that I found a little bit scary. I originally thought that perhaps he is a symbol to scare people away, but I have since read that this statue is actually a dancer, but I hope I will be forgiven for thinking otherwise, as he is wearing an impressive golden mask with bulging eyes, and is stepping forward with a raised baton. 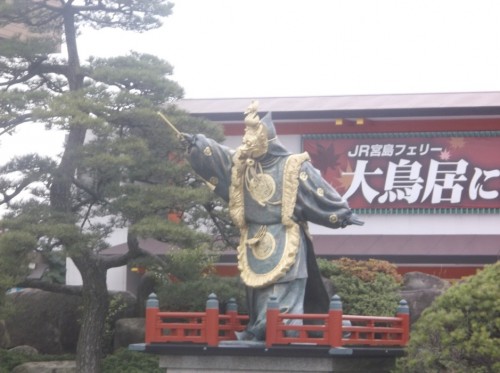 Passing him by leads to the dock, where I waited for only a short while before being ferried across to the island. The ride costs 180 yen, and only takes about ten minutes.

The boat will take you past the famous Otorii gate, offering a good view from the water. As my boat came by, I noticed something that was not so characteristic of all those pictures in travelogues and travel agencies: a distinct lack of water.
The tide was low, and a spew of people flowed out onto the beach. Nevertheless, the gate was awesome. It is truly quite a sight to see the magnificent orange-red towering gate slowly emerge on the horizon.

Disembarking, the first notable thing upon leaving the station was indeed the deer. There are perhaps two places most famous for their deer in Japan, one is Nara, and the other is Miyajima Island. Nara’s deer are said to be very polite – or at least polite enough to bow in turn for food – whereas I discovered that the Miyajima deer were either very lethargic from the humid weather, or else very determined to take whatever edible items you have on your person, including entire boxes of souvenir sweets. 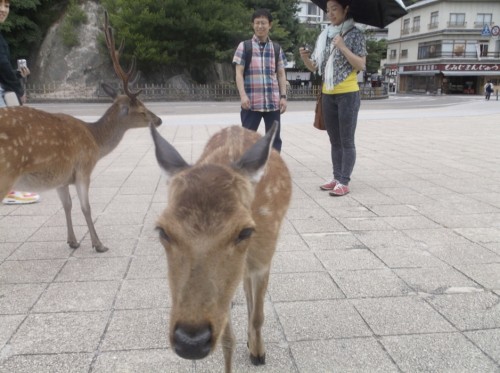 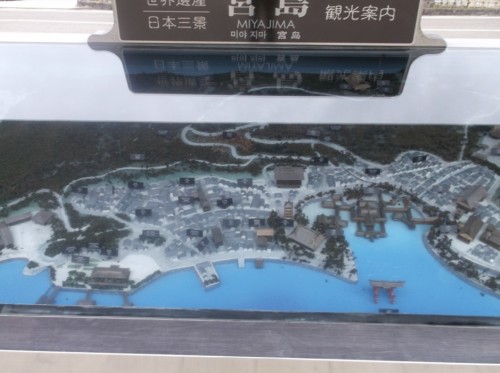 Finding a map of the area showed me the things that I had mostly come for; Itsukushima shrine and its torii gate. They are located on the waters and are designed to look as though they float on the surface, though as I had mentioned, the tide was low for me I was still eager to see the great craftsmanship. I opted to walk along the waterfront to the shrine. All around me I could smell food cooking and I became eager to try something. Miyajima is also partly famous for having oysters, which in the past I had had raw and not really enjoyed; but seeing a stall selling Curry Buns with three oysters baked inside, I simply could not resist. Although the typical “curry” flavour that you will find in Japan was actually imported from England, not India, and the bun is more like a crispy doughnut, the oysters were 100% Japanese authentic, and – just like most Japanese food – very fresh and together the whole thing was perfect.

Not normally one for touristy photos, I could not resist one such opportunity, as the set-up seemed so alien to me. I found a cut-out to put one’s face through of a figure holding a giant spoon in front of the globally famous torii gate, all while a bewildered deer looked on. I would later see the giant spoon, but even after this, I cannot deduce the meaning of this scene. 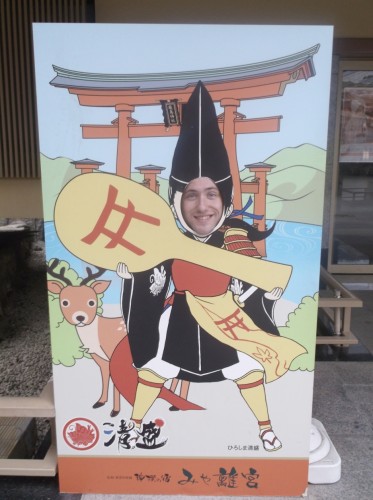 Moving onward, I decided to dip into the town a little. Miyajima was the name of the town, which lends itself to the island amongst travelers and tourists, despite the fact that the island’s real name is Itsukushima. Since 2005, this town merged with Hatsukaichi which is part of Hiroshima on Honshu.
Despite all of that, you would be forgiven to call it Miyajima, as many locals do too.

Walking through the alleyways of the residential-cum-tourist shop buildings I found the giant spoon. 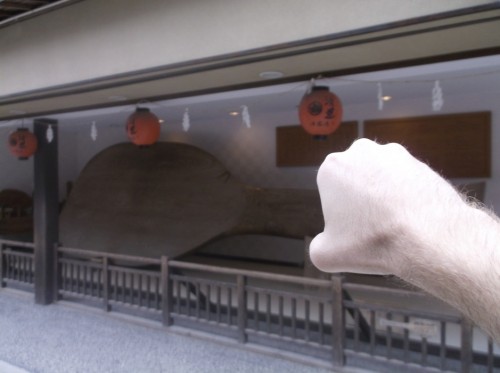 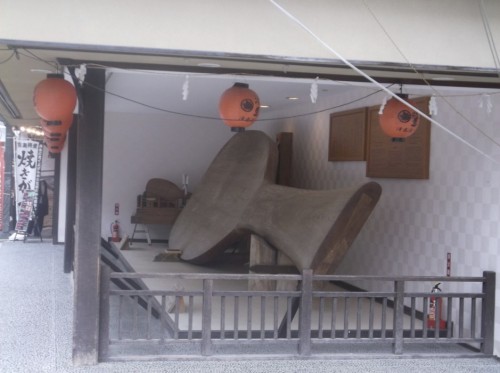 This is the world’s largest rice scoop. The shamoji may seem like an odd thing to want to build in such gargantuan proportions, but it is said that in the late 1700s a monk was visited by the Indian goddess Saraswati in a dream, showing him how to craft the shamoji; thus serving food and preparing meals became easier as the popularity of the utensil spread. It has also since become a symbol of the bond between mothers and wives as they get passed down as an heirloom symbolizing the family duties inherited in the marriage. At the time I did not know any of this, so I could not fully appreciate the symbolism, and instead – like many tourists – I simply scratched my head at the sight.

Like most impressive shrines, Itsukushima is marked by many torii gates (other than the flagship one) and other statues. Symbolically, these gates mark the entrance to the sacred ground, from the otherwise profane land we live in. Generally, torii gates mark the entrance to a Shinto shrine, but they can also be commonly found at Buddhist temples, though usually in a smaller form. 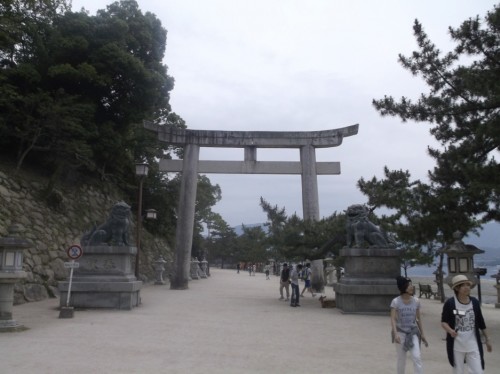 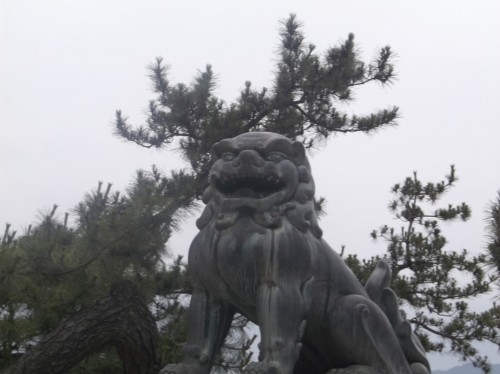 Though languid, I felt as though the deer here were also protectors and indicators of the sacred realm. In some places deer are considered to be pests due to their numbers, but in Shinto religion the majestic animal is considered a messenger of the gods.

Messenger of the gods or not, the deer were somewhat lethargic from the heat, and I sincerely empathise with their desire to simply take some time to stop and do nothing. This is something that is actually greatly appreciated in parts of Japanese culture; known as “ma” the concept of nothing and stillness is deep-seated in Wabi Sabi and indeed a lot of eastern theology. There is no better place to practice this idea than at a Shinto shrine. 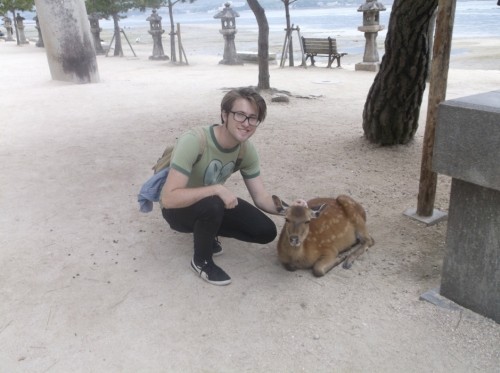 As much as I was appreciating the emptiness and stillness with my newfound deer friends, I was spurred onward by the passing of time, and the need to catch a bus later that day, and I had not even seen the shrine itself yet.

Before entering the shrine complex, I decided to pay a visit to the Otorii. It was said to me that if the tide was low, one could be granted good fortune by passing under; this was an opportunity I could not miss. We tourists flowed under that gate like water over the murky sands. In the distance men scoured the beaches for oysters, though it was not quite the season for them. 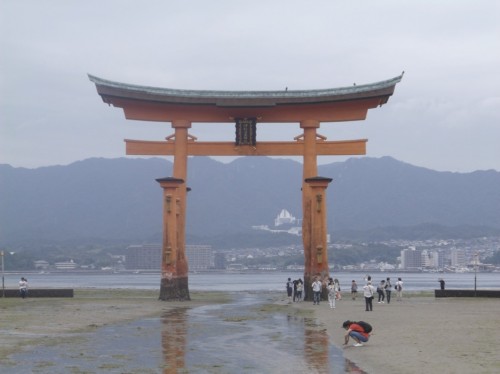 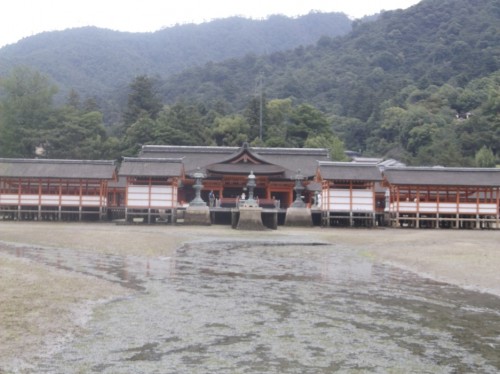 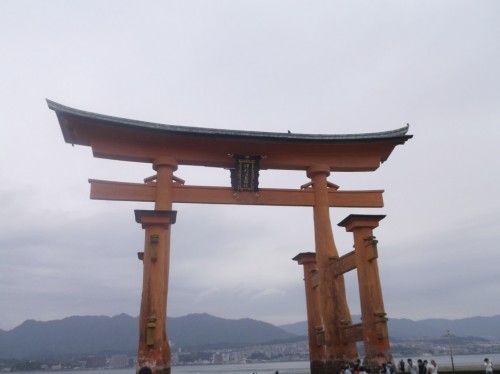 This wooden structure has been partly replaced, as the tides naturally erodes the magnificent structure away, but it still remains as one of the most powerful sights of the world, though it misses out on all of the newly-formed “Wonders of the World” lists, I would argue that it is a close contender. The mighty wooden structure – painted a distinct orange-red – is symbolic of the entirety of Shintoism, and Japan, and if you take into consideration its replaced parts, it could be argued as a prime example for the western philosophical theory of “The Ship of Theseus”; it is not often that one monument can represent so much. Its legs were adorned with sea-life and the coins of pilgrims, hoping for some kind of blessing, making a wish; I joined them. 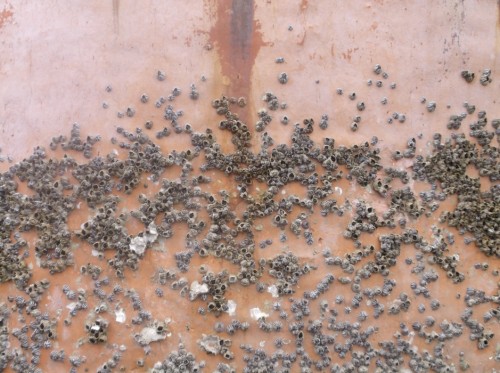 As I finally approached the shrine, I was fortunate enough that many other tourists had decided to leave. You can certainly expect there to be a lot of tourists, and it is good as a shared experience, but I cannot deny that sights such as shrines benefit from a quieter flow of people.

Firstly, I was met by a white wooden horse, whose significance was never clarified to me. And then I continued over the sturdy flooring, through the shrine. The orange structure was aesthetically pleasing, and the entire place is purely relaxing. It is hard not to place your mind hundreds of years back in time as if to be amongst the people of the 1600s. The shrine is also home to the oldest Noh stage, and I could envision the excitement and bustle of patrons watching the show. 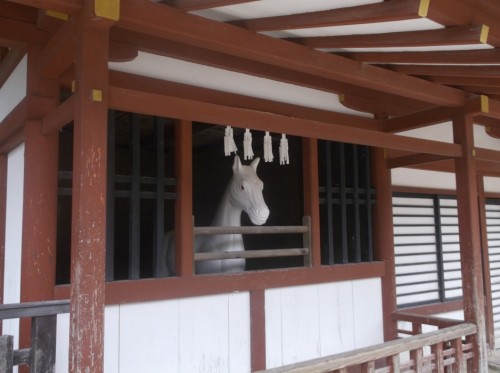 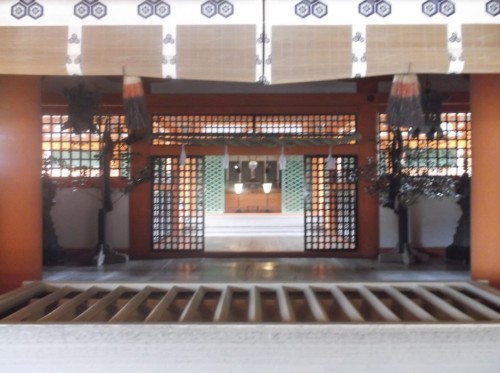 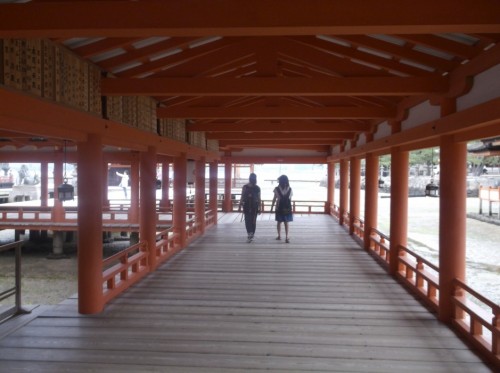 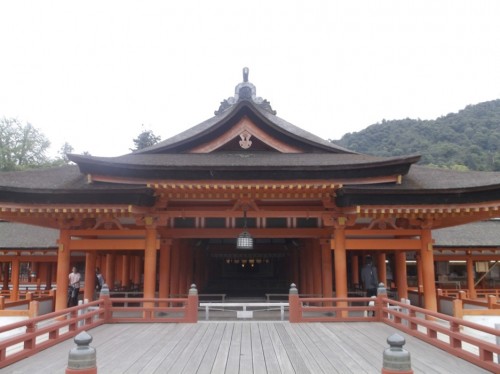 Taking my time to soak in the quiet atmosphere, I walked among the apparitions I had envisioned, and then moved onward to fight the humidity to try and see more of the island.

Sadly, time and the heat were both against me, and I only had time to try and find some more deer, grab an ice coffee from a very nice café, featuring momiji flavouring, and say goodbye to some of the statues and effigies that are scattered across the island. 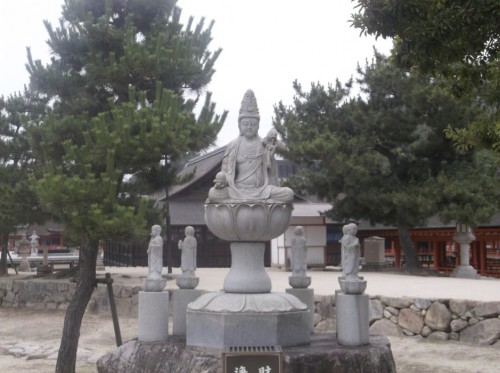 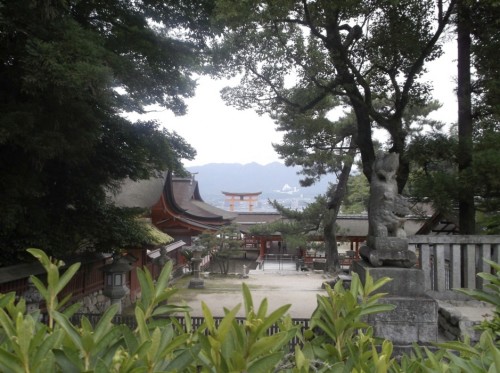