Shodoshima island’s cow shape is lassoed by a single road, and traveled easily by bus. Missing one such bus from the town of Yasuda, I decided to walk 12 kilometers to Fukuda port. Just outside town, dry grasses were matted to the roadside where I was confined to walk on. Confinement though it was, swivelling on my heel I could see the breadth of the bay town Yasuda stretching from ocean to mountain dry tops. 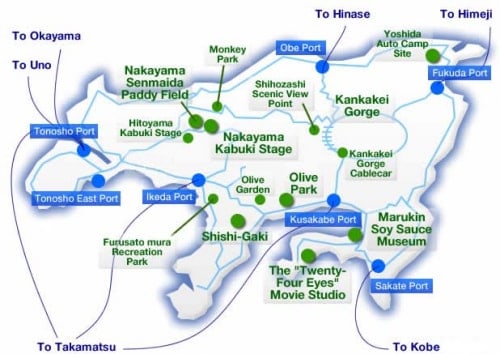 Without a bus and with no assisting sidewalk, the road seemed perilous. Having walked a half-hour out of the city, I figured another 12 kilometers would be shortly trot, and dared the tunnel. Trucks blared through at high register, and wind blew through with the passing trucks. I yelled out in joy for my echo – the triumph of a solitary journey I felt had just begun.

Reaching the other side, a couple hundred meters and a backdraft of wind later, sky and sea seized the island. The exit was cliffs to the sea, a stunning ripple of rock on this leg of the Shodoshima cow. Light caught the sea shimmering, and little windows of ships at sea twinkled like warm light from a sweets shop. Perhaps they carried that sweet Shodoshima soy sauce.

Unhindered by bus travel, not bused and not busied, I walked a grandpa gait down around my first hill. If a car swerved by, it only excited thoughts of an island racing circuit of any leisure-dedicated video game. The drivers handled curves that dared precarious drops which no emergency brake could stall. Gusts up from the sea fluttered lashes of adrenaline.

Shodoshima’s natural masonry masterwork, is a gondola straddled gorge – Kankakei gorge. Singing on high wires just kilometers from these eastern cliffs, its tourism was muted to a pamphlet flat in my bag. I stood standing seawards and counting jabs of earthen dabs while contemplating being engulfed by the water below. 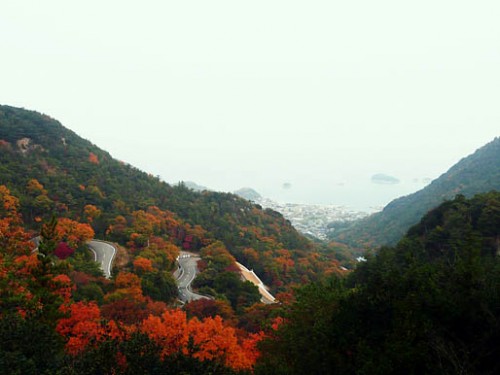 The road tended between dramatics and quiet ocean living. After a little while, I came to a sunset village of some concrete apartments looking better situated in eastern Tokyo’s residential high-rises than by the shore. Quiet as the surrounding winter forest, it was yet a dramatic set of spires set against the marine decline of the coastal mounts. No sound drifted out of the buildings, and I felt it bizarre to consider that even a small island such as Shodoshima had bedroom communities.

In deciding to walk 12 kilometers of coastline, I neglected the thought of hastening winter nights. The eerie quiet of bedroom towns and the long spaces between them drew in night on a slow pull. More lights scintillated out to sea then on the empty roads.

I stopped at one town before darkness fell in its deepest hush. Unpeopled as the sea bluff buildings recalling Tokyo’s sleepy residential areas, my expectation should have been on the odd friendly Oji-san staffing a small grocer’s. After circling his store in a small distress, I asked the distance to port. He answered at less than half the distance from my southern starting point. When I explained that I had been walking and planned to keep doing so, he offered me chikuwa (fish cake tube). Explaining I was shy a yen or two of purchasing, he didn’t shy from offering more. Grateful, I wished him well and returned to the road.

Somewhere along the road, the last port bound bus drove by. It groaned long, entreating me to board at my last chance. It left me behind to the shade of night and trees. I slowed a little, contemplating the next seven kilometers in the night.

The intermittent villages dwindled away, and I found myself alone in a lengthening cord of darkness. While I slowed my pace, my heart still quickened to think of the beasts in the night. One passing car flashed into the darkness. Instead of relief, it took me for a tumble in a ditch. Falling, I saw no tree-bark in the light. Instead, in the moments following, I heard a bark in the dark.

Though I could see no house, I heard startled dog’s barks in protection of a dog’s house. There’s wildlife throughout the Japanese islands. Bears and boars roam the mountains and woods. From the snorts I began hearing in the dark, Shodoshima island was no different. Moments after I had fallen into the ditch, I started running to the nearest safety.

For once in my life, my foremost concern wasn’t being impaled.  With a plummeting cliff to my left and a mountain rising to my right, my heart had both plummeted in my chest and my blood pressure risen. A single house to my front happened to have a single wall, which I vaulted onto.

For a startled minute I remained immobile at the wall.  After moments, I threw my body into a hitchhiking gesture the likes of which the island had never seen. After three cars slowed in confusion around the corner, and in an outstanding display of island hospitality, a driver slowed. Her stopped car couldn’t brake my frenzied Japanese speech, as I asked for a ride to Fukuda port.

The longest conversation I held at Shodoshima took place in this car to Fukuda port. My body slackened from the recent stress, and the exchange was both the longest and most interesting explanation of being an international student. It helped that my companion wore a concerned face from my recent encounter.

From Himeji port to Fukuda port, the one-way ticket is 1520 Yen. 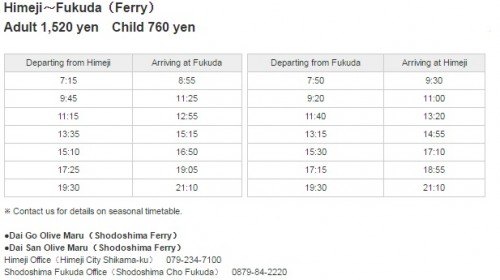