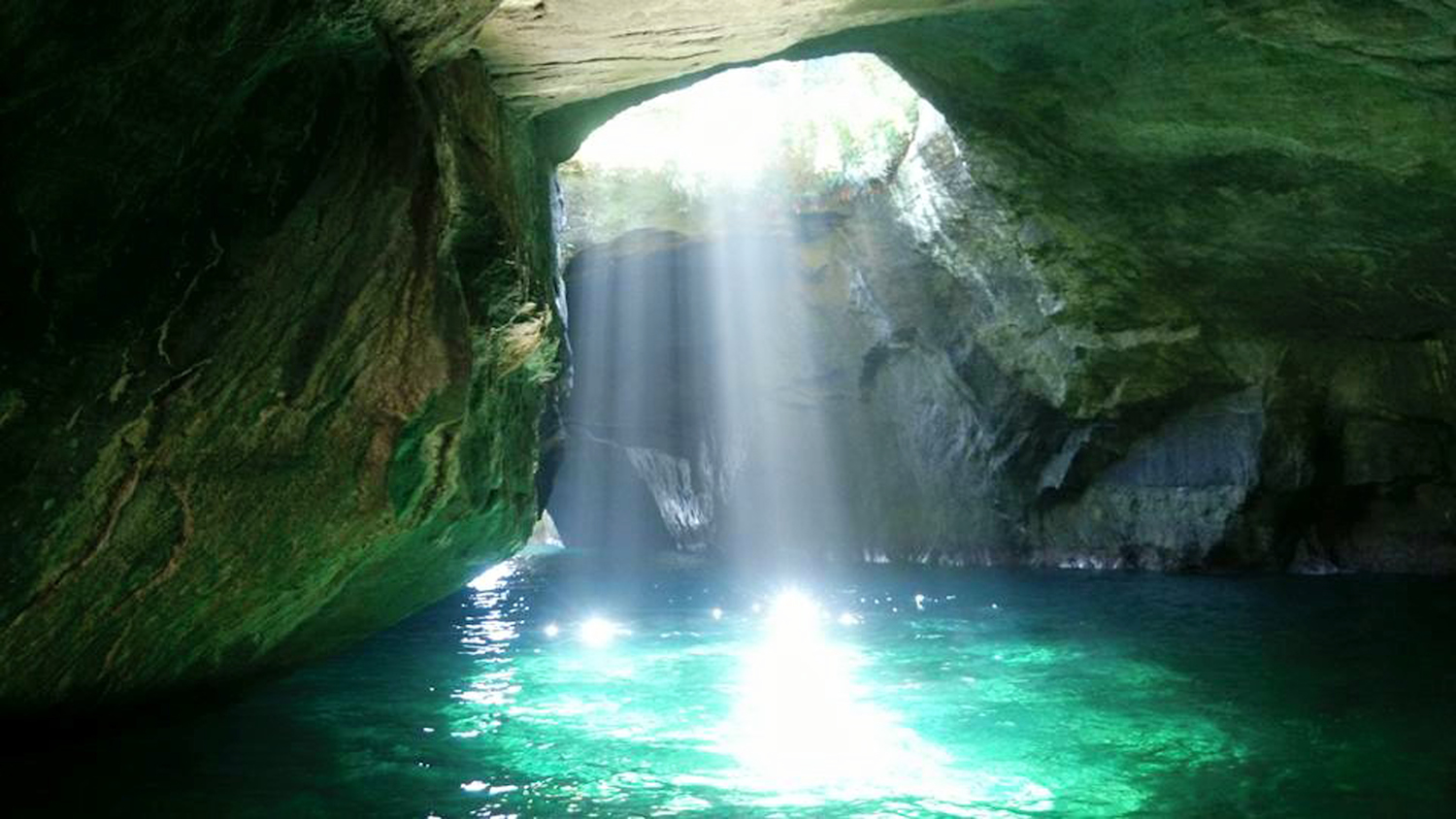 After my night in a ryokan owned by a fishermen family in the Kumomi Onsen village, I went to Dogashima on the western coast of the Izu Peninsula near Nishi-Izu. With its wild coasts and its blue cave, this part of the Izu peninsula is truly stunning with many scenic spots!

From the port of Dogashima, you can travel to the magical Tensodo blue cave by pleasure boat (called “Dogashima marine”). 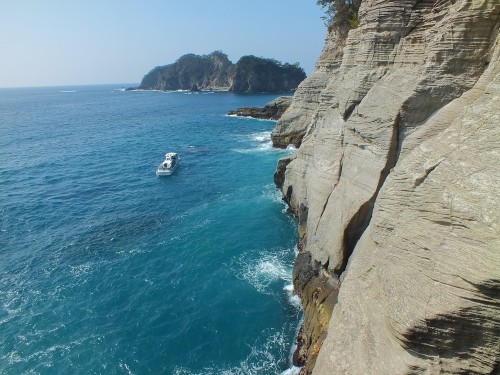 Tensodo was designated as a natural monument in 1935. It is a sea cave located only a few hundred meters from the coast, with three entrances. The south entrance is especially large at 147 meters in length allowing a boat to enter. 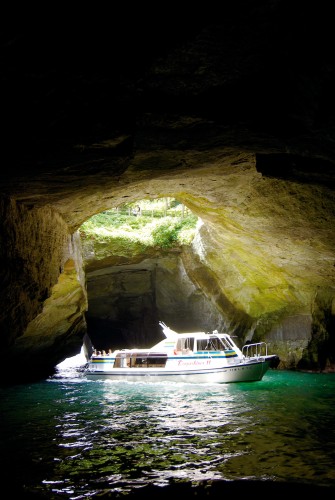 The main attraction of the cave is the ray of light which penetrates through a big round hole in its ceiling. When the sun shines down on the waters of the sea, they become a turquoise blue firing on emerald green it is truly spectacular! The cave’s name “Tensodo” from “Tenso” means “A window shined by the skylight”. 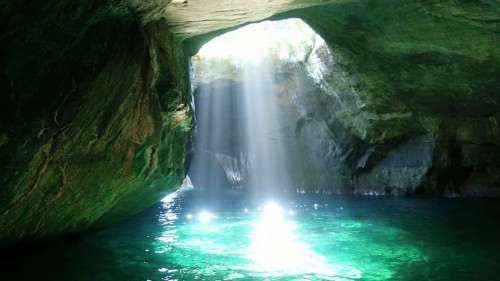 Beyond the cave which the bay is also beautiful with its transparent water. This is called Suruga Bay and rises from the 2,500 meters depth of the Suruga Trough running up the middle of the bay, which makes it Japan’s deepest point. Even if you do not have time to go on the cruise, do not hesitate to make a stop to admire it! 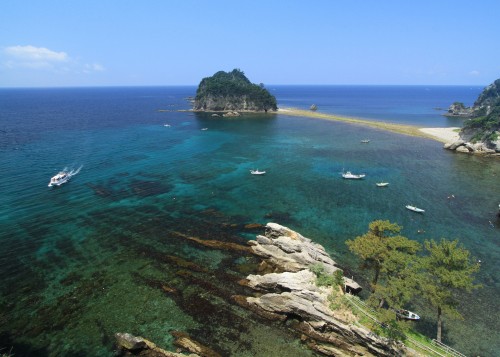 The “Cave excursion” cruise takes 20 minutes and costs ¥1200 per person.

In case of bad weather, I advise you to consult the website of the port to be sure that the boats are running. If the waves are too strong, the boats do not leave the port.

Koganezaki park (黄金﨑公園) is located 10 minutes by car from the port of Dogashima. In the summer you can go diving, and in winter you can admire the sunset. I suggest you arrive in the late afternoon (around 5pm), just before the golden hour to admire the light of the sun setting on the cliff (formed by lava from the eruption of an underwater volcano). The name of the park, “Koganezaki”, can be translated as “golden cape”, a very appropriated name! 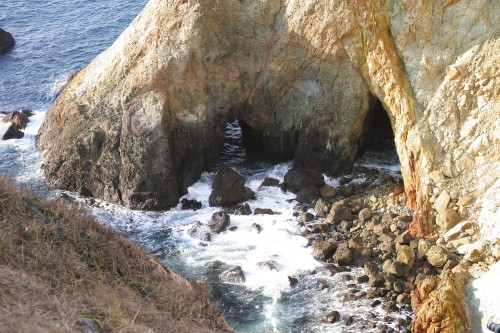 From a certain angle, part of the cliff takes a surprising shape! Can you visualize it? 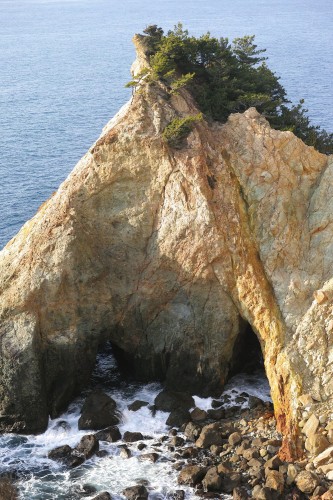 Yes, it looks like a horse’s head! Once you’ve seen it, it is hard to see something else! 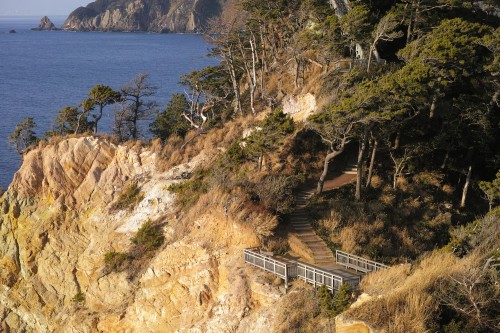 Exploration of the Cliff

From the parking lot (free of charge), a path makes it possible to walk on the cliff: on one side it leads to a small shrine (inside a pine forest that smells really good, you will recognize it thanks to its red torii) and on the other side, to different observation decks. Apparently, on good weather, you can see Mount Fuji in the distance (I was not lucky enough to see it, there were too many clouds the day I went)! 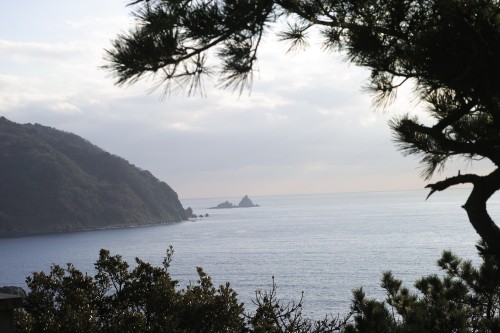 I learned that the place is even more spectacular when the fields of mustard flowers in the neighborhood are in bloom! I went there at the beginning of February; I was a little too early. The ideal period must be around the end of February / beginning of March. It did not stop me from fully enjoying the beauty of the place! 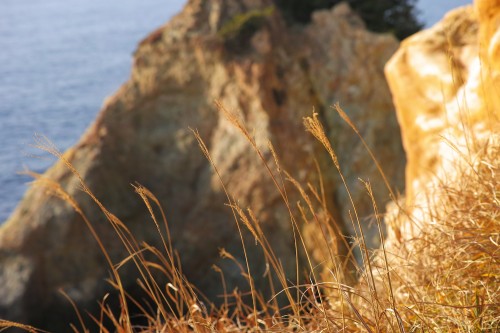 As the place is difficult to reach by public transportation, there are very few tourists. If you want to get there, you will have to rent a car (if you are American, this article explains how to drive in Japan). If you go there during winter, you would probably be the only visitor! Maybe in summer you will meet some divers. If you are an explorer, you can get down to one of the coves and enjoy the beach!