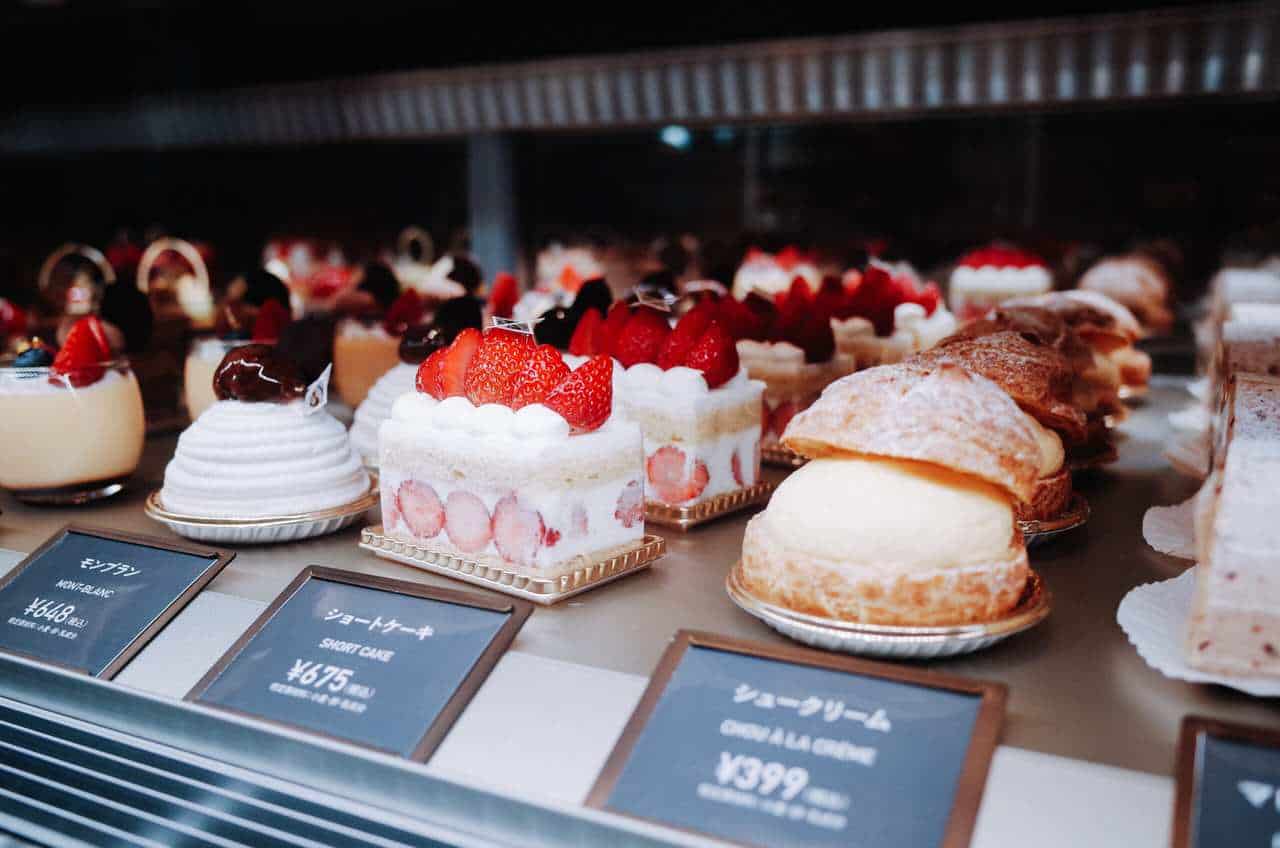 Japanese Cakes: What Are the Most Popular Pastries in Japan?

Japanese cuisine includes a great variety of dishes, and, little by little, they are becoming known in Western countries. Many people are discovering that there is much more than sushi and ramen. If you are one of those, I invite you to learn about Japanese cakes!

I have a confession to make: I can’t stop hearing my stomach growl just from imagining the magnificent cakes of Japan. I love sweets and to think about the great cakes in Japan makes me want to find one the instant I’m done writing this article.

So, without further ado, scroll through the delicious, creative world of Japanese pastries. After reading, you can choose which one you want to try on your next adventure in Japan.

What Are the Most Popular Pastries in Japan?

Wagashi (和 菓子) are traditional Japanese sweets. Unlike Western desserts, they’re not as sweet and are usually filled with red beans, which generates a very different and unique “sweet” taste. There is a long list of wagashi, so I have followed my criteria to introduce you to some of them.

Modern sweets tend to be a bit different too. In large cities, you can find western products with a Japanese essence that makes them unique. There is a big world related to doughnuts: in Floresta Nature Donuts Store, there are animal-shaped doughnuts named doubutsu donatsu, and at Krispy Kreme, you can find seasonal flavors and shapes for holidays like Halloween or Christmas.

When talking about ice cream, you can also find animal-shaped ice cream or Pokemon-shaped ice cream cakes at Baskin Robbins. You can enjoy rainbow cotton candy at Takeshita Dori in Tokyo or fluffy pancakes with different flavored sauces.

And just as you were expecting, this section also includes Japanese cakes.

How Popular are Japanese Cakes?

Many Japanese cakes have a foreign origin. Its influence came to Japan just in the last few centuries, as it was not until after the Edo Period that the country opened its frontiers internationally. But throughout this time, Japan has been adapting these cakes and has changed them in their own way.

Thus, many Japanese cakes are creamier and less sweet than Western ones because, as I said before, Japanese people tend not to enjoy the excessive sweetness. Another remarkable difference is that individual servings dominate in pastry shops. So you can buy different flavours and try them all. They also sell full cakes, but they are never oversized.

In my country of Spain, you can find a cake as a typical dessert in every restaurant, no matter the type of food they cook. In Japan, although there may be an option to order cake in a restaurant, it’s best to go to a coffee shop or patisserie if you want to eat a proper cake. Nevertheless, Japanese people really enjoy eating cakes, so you can find them in many different establishments, such as shopping malls, cake shops, coffee shops … even in conbinis (convenience stores)!

The Best Japanese Cakes that you Should Not Miss

In Japanese pastry shops, you can find a wide variety of cakes with different flavors. Here are the best Japanese cakes you can’t miss if you travel to Japan.

This delicious list begins with the famous cheesecake. Japan has different varieties of this cake, but the spongy one is the best known. You can cook it by mixing egg whites, milk, sugar, and cream cheese.

If you’re wondering about its origins, you’ll have to go back to the 50s when Japanese gastronomy added cheese to their kitchen inventory. Japanese weren’t used to the strong cheese flavor, so Japanese cheesecake is not that intense. During the 60s, Tomotaro Kuzuno created a Japanese version of the cheesecake by mixing the German käsekuchen, a light cheesecake, with the rich American-style cheesecake. One of the first chains to market these Japanese souffle-style cakes was Rikuro Ojisan.

The roll cake originates in Europe, often known as swiss cake in other countries. The roll cake is a long, rolled cake with filling inside and a topping of another ingredient, such as jam or chocolate. They are so popular in Japan that specialized stores, from large metropolises to small cities like Mameda District in Oita, are found across Japan. There are also local variations, such as the matcha roll cake.

Originally from Portugal, where they call it madeira cake, the castella cake is made of sugar, flour, egg and honey. The Portuguese had a close trading relationship with Kyushu since the 16th century, especially to the port of Nagasaki, so it is no wonder that this cake is a specialty there. Currently, like the roll cake, there is a variety of this cake made of matcha.

This cake didn’t have a nice beginning in Japan but luckily had a happy ending. Karl Juchheim, a German living in China, was a prisoner of the Japanese during the First World War. In 1919, the Japanese asked him to cook a Baumkuchen for a commercial exhibition in Hiroshima. He saw how amazed they were with his cake, and when he was freed, he settled in Japan and opened his first sweet shop in Yokohama. Today it is such a popular dessert that it is sold in many places, such as Shiga.

This cake’s shape remembers a layered tree ring. Its preparation is simple; the essential ingredients are butter, egg, sugar, vanilla, salt, and flour.

Japan introduced its own Christmas tradition, and one of the Japanese additions was the Christmas cake. This is a soft sponge cake with white frosting, strawberries and Christmas decorations. How could this cake tradition spread throughout the country when Christianity is not the main religion in Japan? The answer is simple: this cake was a sign of economic prosperity after the Second World War since it was a highly expensive, luxury product.

As a matter of curiosity, these cakes’ prices come down on December 25, since tradition says you have to eat it before Christmas day. The same cake without Christmas decorations is named strawberry shortcake, and you can find it in almost any Japanese bakery. I love it!

This peculiar sponge cake with chestnut paste on top has its origins in 17th century France, but it wasn’t until the 20th century that it arrived in Japan. Its curious name is due to its similar appearance to Mont Blanc with the cake with a ‘mountain’ of the paste on top. Although the taste of this cake may seem a bit odd, Japanese people love it!

Recommendations of Pastry Shops in Japan: Where to Eat Cakes?

There are countless places to try these sweet delicacies in Japan, and making a list would take years. So I have decided to ask my fellow Voyapon writers to recommend their favorite pastry shops:

Without thinking twice, Rómeo recommends Maccha House in Kyoto. If you like matcha, this is your place. Clémentine remembers buying magnificent Christmas cakes at Sir Lipton, a tea room.

Yvonne recommends eating at Mr FARMER restaurant in Shinjuku, as they have vegan cake there. And Lucía recommends Qu’il fait bon for its cakes and pastries with delicious seasonal fruits and A Works Cheese Cake Cafe, a cafeteria with very original cheesecakes.

And finally, it is my turn. I recommend Pablo if you like cheesecakes and Sweet Paradise restaurant, to try many dishes at a reasonable price.

As promises are made to keep, now that the article is finished, I’m going to have a cake. Which of the above would you choose? I know it’s a tough question, but don’t worry, any of them are going to be spectacular. Enjoy Japan’s cake heaven during your next trip to Japan!