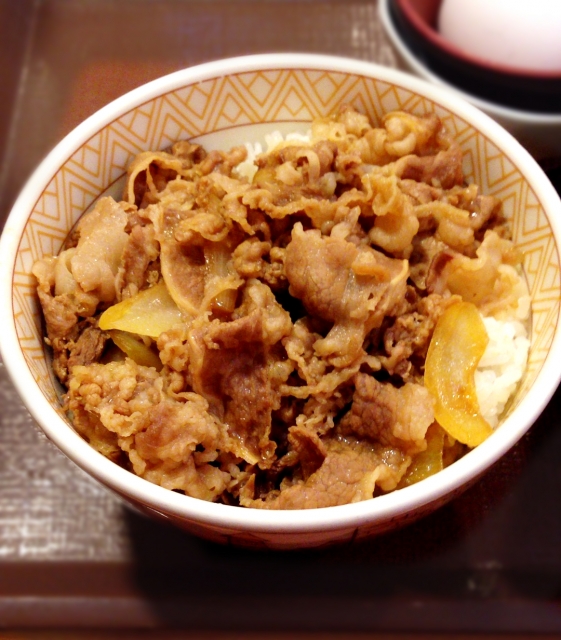 Gyudon is probably the most popular cheap (but oh so delicious) fast food eaten by the Japanese. The name comes from “beef” and “bowl”, and that’s exactly what it is. In a bowl you will find rice flavoured with dashi (a seafood stock), onion and beef. The more exotic choices can include an uncooked egg, spring onion and noodles. The Gyudon bowl has a relatively short history compared to other foods, with the first Yoshinoya opening in 1899. 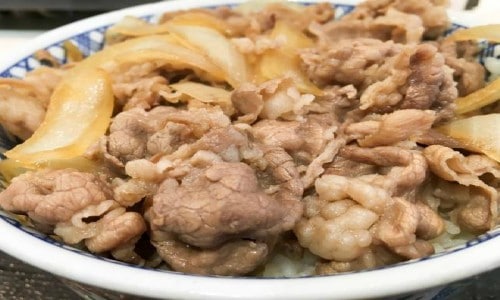 The top three Restaurant chains for Gyudon are Yoshinoya, Sukiya and Matsuya. Why do they all end in “ya” I hear you asking? Well that is because “ya” means shop! Gyudon chains are cheap, abundant and most importantly they are (mostly) open 24 hours! If you find yourself hungry for a cooked snack at 3am in Tokyo after a big night out, chances are there is one of the three Yoshinoya, Sukiya or Matsuya less than a kilometre away from you… and still serving food! 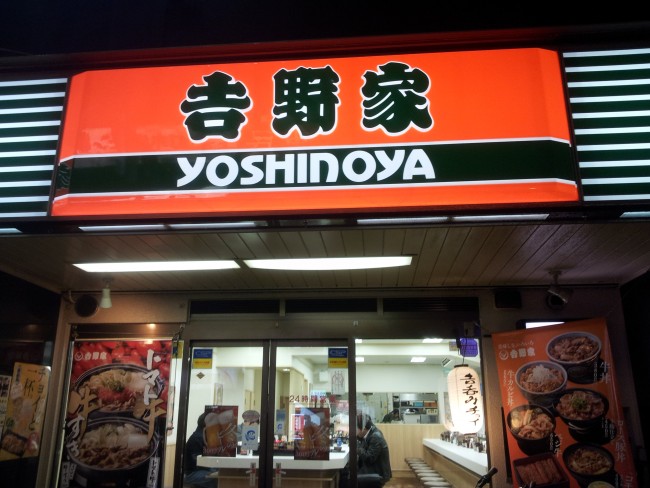 Yoshinoya (website) Restaurent is the original Gyudon chain, dating back to the 19th century! Many Japanese will claim the Yoshinoya has the best tasting food, but I think this might just be an “original equals best” mentality. Why not just eat all three and decide for yourself?

The menu at Yoshinoya is pretty simple. They specialize in Gyudon and there is not too much variety outside of that. If it’s plain and simple Gyudon you want, Yoshinoya has you covered.

However, speak the magic words “Tsududaku” (sue-du-dah-ku) when you order, and the staff will make you an extra broth-y bowl! The story behind this is that business men with a shortage of time would prefer it this way, as it’s faster to pour down the throat before catching the train. 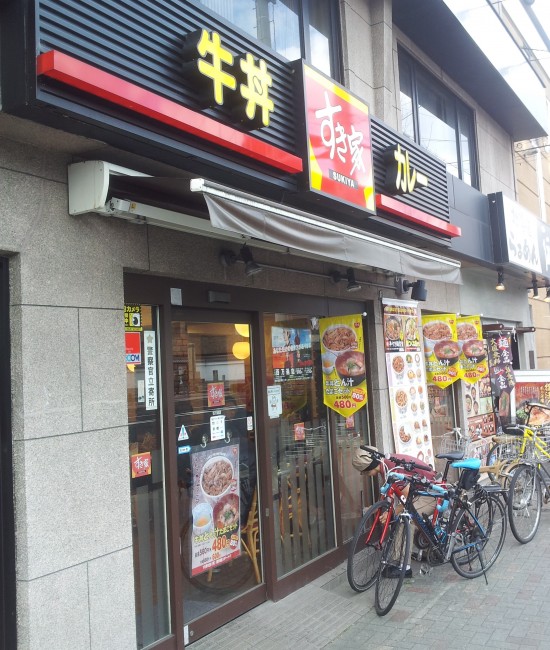 Sukiya (website) Restaurant is the place to go for a good variety of food. At Sukiya you can get Gyudon, BBQ, Pork, Chicken, Fish and even sweets.
A Sukiya menu can be found on each table, and it is divided with page separators for easy perusal. 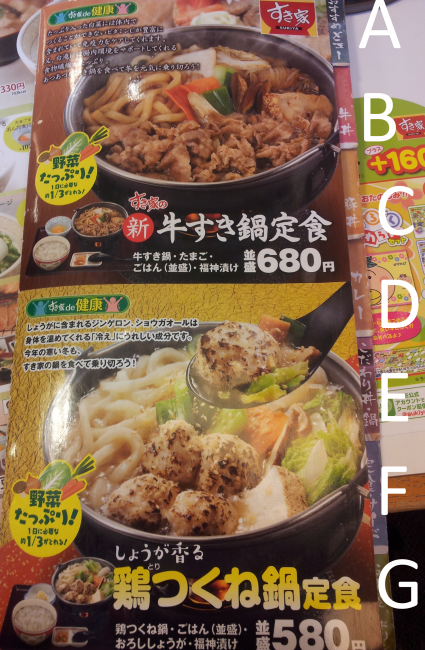 Once you have made your selection, hit the button to call a staff member over and give them your order. If you’re not comfortable with speaking Japanese, you can either point to the photo and size or try reading the words phonetically. Here are some tips to make things a little easier.

Let’s try to make an order for a spring onion and egg, medium size Gyudon.

You can say this to the staff,

After waiting a few minutes (sometimes less!), enjoy your meal. Don’t forget to say the Japanese “Bonapatit” – “Itadakimasu” before eating! 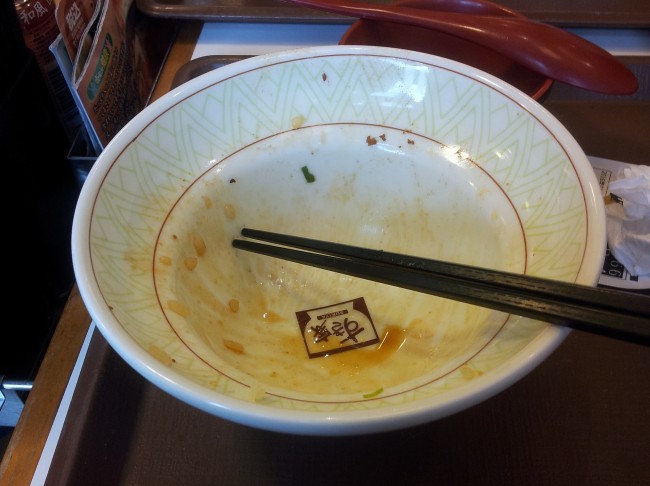 Let’s do our best to eat everything and have no left overs! You will find it very uncommon for people to leave leftovers in the bowl at a gyudon-ya, so do as the Romans (Japanese?) do. 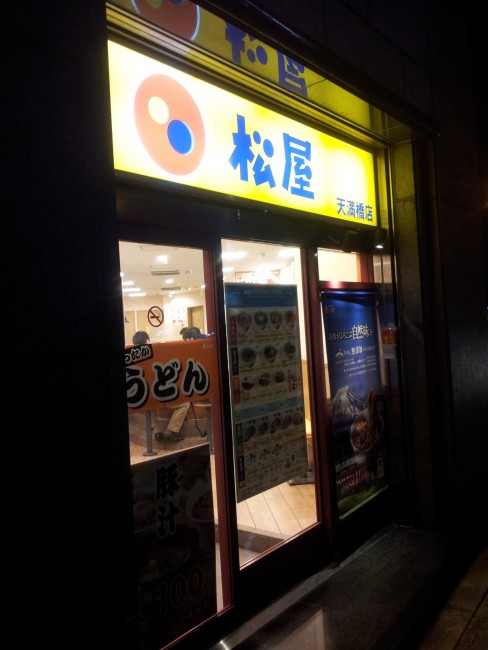 Matsuya (website) Restaurant can be a little tricky at first, because going against the huge westernization customs of Japanese culture, they don’t have any English characters in their sign. Keep an eye out for the distinct circular logo and you will be alright. Matsuya likes to play the game a little different from the last two, calling their version of the Gyudon “Gyuumeshi” instead. Well, the flavour is similar so I don’t think the difference extends much past the name.

First let us look at the menu available at Matsuya. The first thing you might notice is they have curries and set menus. At Matsuya we have a little bit of variety beyond Gyudon alone as well, but not quite as much as Sukiya.

The second thing you will notice is they have English! From the left we have four varieties of Gyudon, normal, spring onion and egg (I recommend it!), Ponzu and radish and finally Kim Chi.

Next we have the baked/BBQ’d variety of meats. From the left we have BBQ with Kimchi, then Bibim (The Korean style) and then pork and green onions. Delicious.

Next we have the curries. If you are a stranger to Japanese curries… well, just know that they don’t taste how you might expect a curry to taste. Japanese curries are usually quite sweet, but if you can enjoy that it, it’s pretty delicious too.
If you want to get a good look at the Matsuya menu, they have an English webpage too. 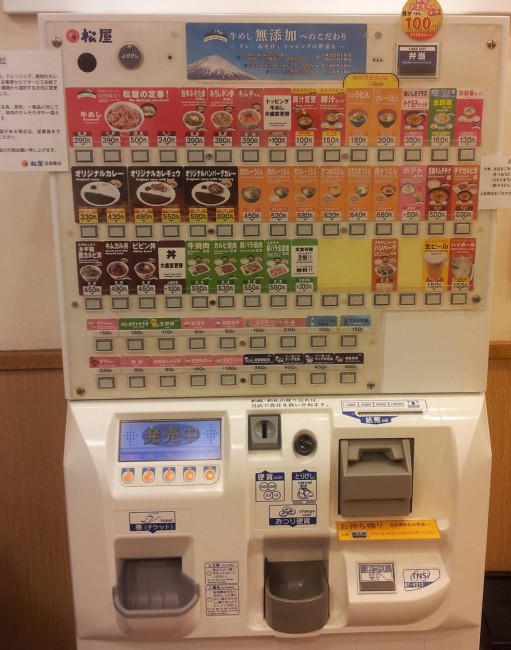 When you see a vending machine (not all stores have this system, but most will), it means you will order your food there. After making your decision, insert your coins or note into the correct slot. If you change your mind, press the big button that is labelled とりけし. 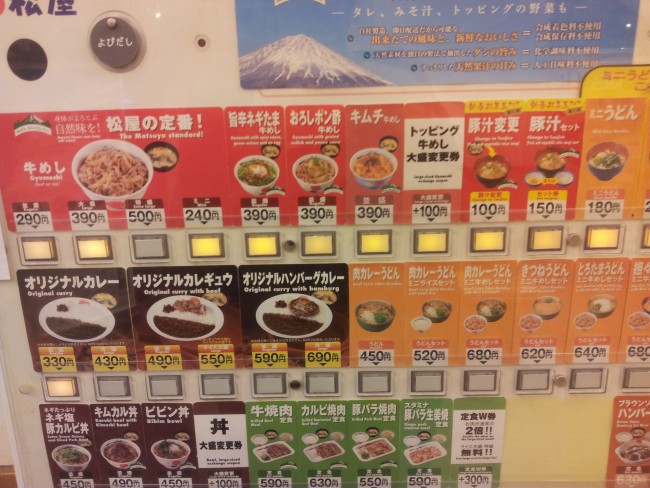 As you insert more money, the products that you can afford will light up.
Once your selection is light up press the button and you will get a ticket and your change. 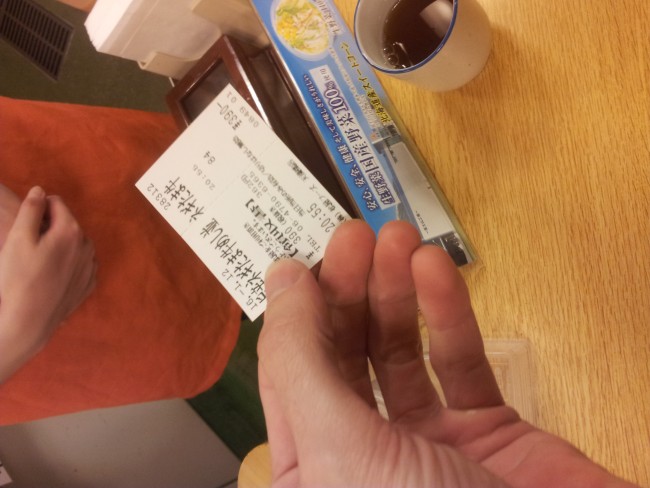 Take your ticket to the server and pass it to them, and they will give you a free drink while you wait for your food! 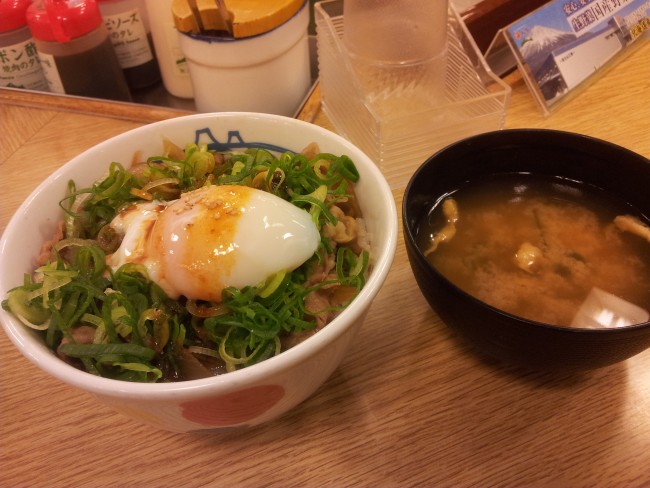