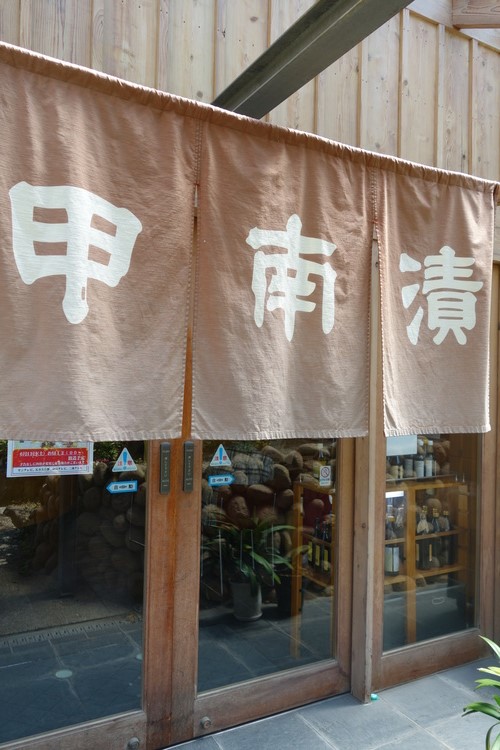 I love pickles; coffee and tea might top my list of favorite food and drinks but pickles don’t get any less love from me. Pickles can give insights into how locals once lived. Specifically, how they have developed or adapted to preserve or process their foods, with what they have in abundance and/or according to their needs. So you can imagine my delight when I chanced upon a museum that offered me more insight into not just pickles, but sake as well.

In Kobe, my region, kounanzuke (甲南漬) would be the representative pickles. We might already have read about nadagogou sake (灘五郷酒), which is another must-try original; and kounanzuke is no random stranger to nada sake because – hold your breath – kounanzuke are pickled by the lees left from nada sake’s production.

Kounanzuke, more commonly known as narazuke (奈良漬け) outside of the Nada area of Kobe, is believed to have originated from Nara around 700 AD. The name narazuke, which has been found on records from as early as the 15th century, has become a general term to describe foods pickled with salt and sakekasu (酒粕; lees from sake production) rather than pickles from Nara, per se.

The Kobe Kounan Muko-no-Sato Kounanzuke Museum (神戸甲南武庫の郷甲南漬資料館) was where I stumbled across when searching for original Kounanzuke to taste. Operated by Takashima Alcohol & Foods Company (literal translation of 高嶋酒類食品株式会社; established in 1870), the museum offers a quick but useful introduction to Nadagogou’s sake-making history as well as the company’s Kounanzuke tradition, which method has remained unchanged since its first production over a hundred years ago in 1904.

The first thing that struck me when I entered the museum was the mood of Meiji period it presented. The décor, the production tools, the artifacts that have been preserved; I reckoned that a larger-than-necessary quantity of objects or explanations on display would have seemed misplaced here. The quality of the surviving evidence that exhibited the mood was what provided a great experience.

Unexpectedly satisfied by the self-guided tour, I chanced upon the museum manager’s talk on the production of kounanzuke, to two ladies who seemed to be preparing some sort of media materials.

I learnt that harvested vegetables – typically white radish, eggplant and melons such as cucumber – are first processed, pickled with salt, and stored in a vacuumed environment for two to six months. The salt is then removed, and in substitution, lees (i.e. dead or residual yeasts) that usually contain 1-2% alcohol are added to the pickles. The pickles are kept for three more months. After that, old lees are removed, applied anew, and we wait for another three months.

The process repeats similarly, but replaced with lees of higher alcohol and lower salt content each time. The last step includes adding sugar and mirin to season. The colors of the pickles, ranging from dark brown to almost black, will be the outcome of the length of pickling.

The resulting kounanzuke, unlike the usual salt or vinegar pickles, will have a certain sakekasu flavor and an actual 5-6% alcohol. To answer the question in everyone’s head now: Yes, you can get drunk from eating kounanzuke. However, in theory, one will have to eat over 100 pieces of narazuke in a very short period of time in order to have enough alcohol in blood to be qualified as drunk driving – which is quite hard to achieve considering the amount of chewing involved.

The tour ended with visiting the museum’s garden (where there is a real bomb shelter) and the most awaited kounanzuke tasting. The pickles offered for sampling – which may differ by the season – included a piece of shiitake mushroom, daikon and store-exclusive “Nada Mikage-zuke” (灘・御影漬).

Nada Mikage-zuke, which was a mix of small narazuke vegetable pieces and special miso paste, was what I liked the most. But honestly speaking – and I have heard it multiple times – kounanzuke is not something that everybody finds suits their palate, especially because of that robust alcohol taste in mouth and aftertaste, whether you like drinking or not.