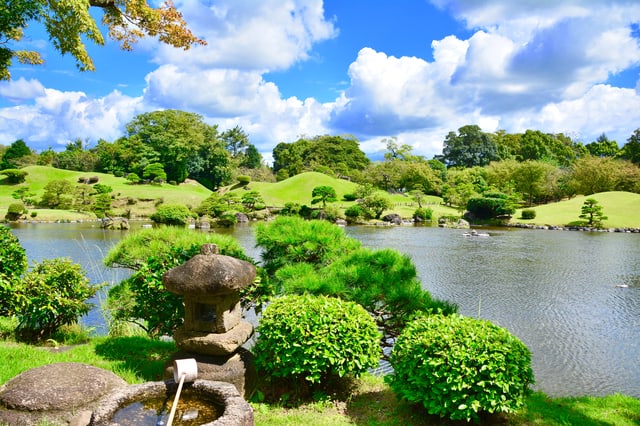 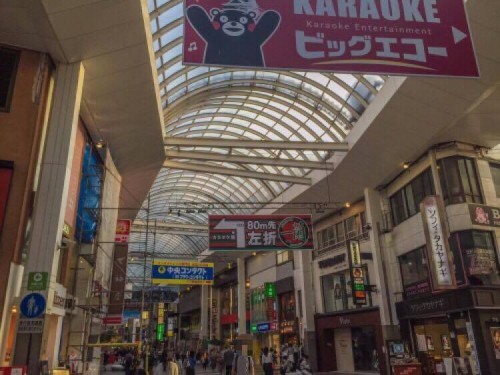 Although repairs were ongoing, shopping arcades began to return to business about a week after the quakes.

Kumamoto has been a prefecture in recovery since being rattled by two earthquakes in mid-April of this year, both breaching the maximum of 7 on the Japanese seismic scale. There are are still several signs of what Kumamoto has been through – be it in the damages to Kumamoto Castle, or the residential plots where houses used to stand. However, thanks to the outpouring of effort from locals and other volunteers, Kumamoto has made huge strides in its recovery within a relatively short amount of time. 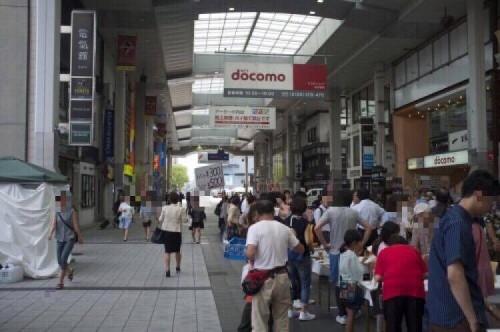 The central shopping arcades have resumed business as usual, hosting a number of festivals and markets. 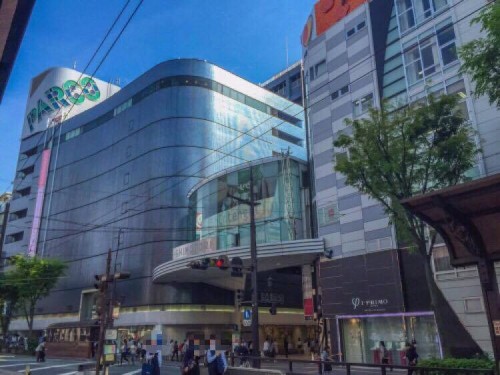 During the early weeks following the earthquake, Kumamoto City’s downtown scenery was rather surreal. The city’s core was a ghost town, with the exception of Japan’s Self-Defence force and other groups providing aid to the city. Flash forward three months later, and looking at the downtown makes it seem almost as though nothing had ever happened. Shops in Kumamoto City’s central shopping districts of Shimotori and Kamitori are completely reopened, and are more bustling than ever. There is no doubt that much of this can be credited to the resilience of Kumamoto’s local people and businesses, many of which worked together to share supplies and efforts in order to help rebuild the city. 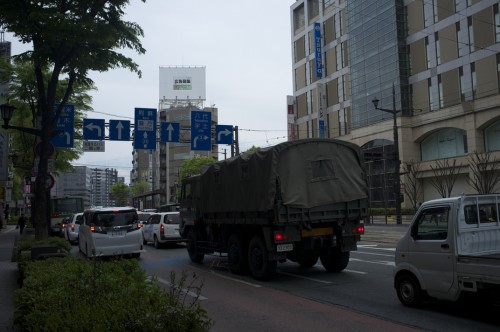 Kumamoto City’s downtown core, one week after the earthquake. 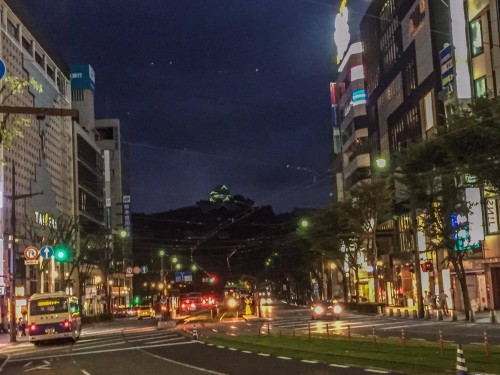 Unfortunately, Kumamoto city’s most iconic landmark, Kumamoto Castle suffered heavy damages to its foundation, and is expected to take at least another decade to reopen completely. Thankfully, the surrounding park, and Sakurano Baba Johsaien castle town are now reopened. Although the castle grounds can not yet be entered, visitors can still learn about the history at Johsaien, and survey the damages perfectly from the surrounding areas. Also among the castle grounds, Kumamoto Prefectural Museum of Art, and Kato Shrine thankful managed to survive the earthquake relatively unscathed. The shrine is currently accessible by route 303, the road lining the castle to the east. 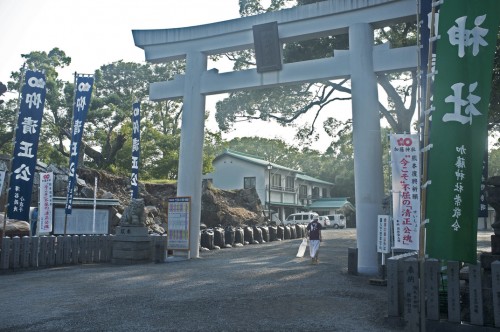 Although the surrounding area suffered some damages, Kato Shrine remains intact and operating 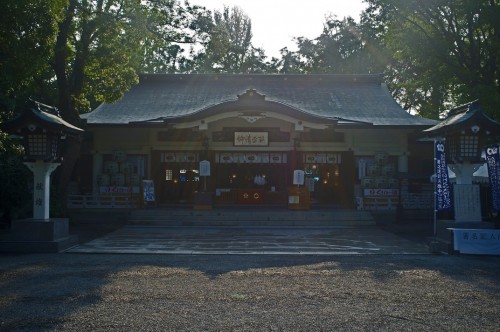 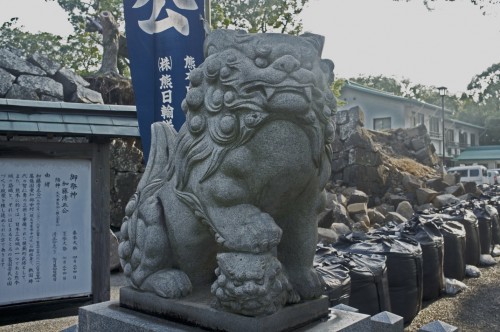 A little further from downtown, Suizenji Park has reopened, and is back to its former beauty. Although some of the architecture is still in the process of being repaired, the pond has been refilled, features of the park are otherwise back to normal. Suizenji’s outdoor theatre was thankfully undamaged, visitors may be able to enjoy the opportunity to enjoy live performances in the park. 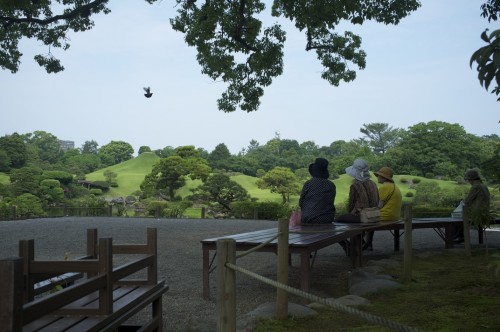 Leisure as usual in Suizenji Park

Although transportation was at a standstill for several weeks after the quake, roads and rail have since been repaired, and have resumed their usual timetables. This includes Kumamoto’ city’s tram and bus lines, as well as airport shuttles, commuter train lines. The surrounding prefecture still faces some challenges, particularly in the hard-hit region of Minami Aso. Travellers should be advised that as of Mid-August, several of JR’s train stations in the Aso region remain closed due to damages. Although JR service to Aso station from Beppu/Yufuin has resumed, or the time being, Aso region is best reached from Kumamoto via Kyushu Sanko Bus. 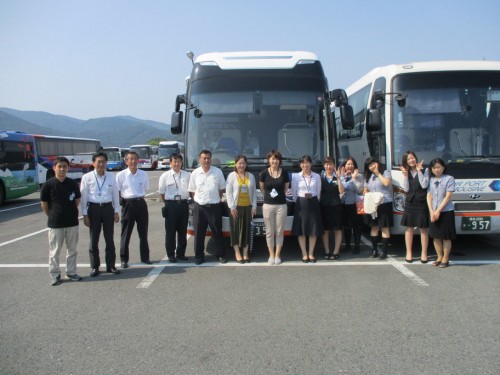 The team at Kyushu Sanko

Kyushu Sanko, based in Kumamoto, provides great transportation for both locals and travellers.  After the earthquake, they offered express buses which featured wider reclining seats and toilets for the victims displaced by the earthquake. The are a very symbolic company, in both Kumamoto and Kyushu at large. 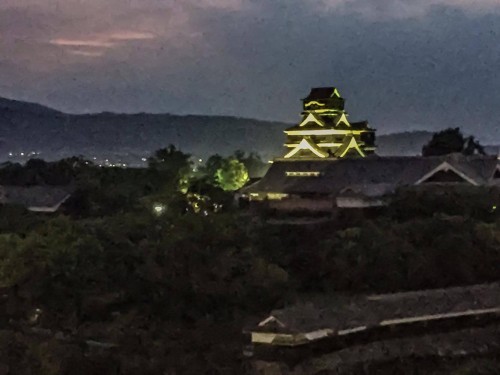 The reconstruction has been improved quickly thanks to everyone at Kyushu Sanko Bus. Currently Kyushu Odan bus to Aso from Kumamoto city has resumed its normal service (As of August, 2016: 2 round trip compared with 3 round trip before the quakes). In following articles, I will introduce how to ride the Kyushu Odan bus, and our journey to Aso & Kurokawa!