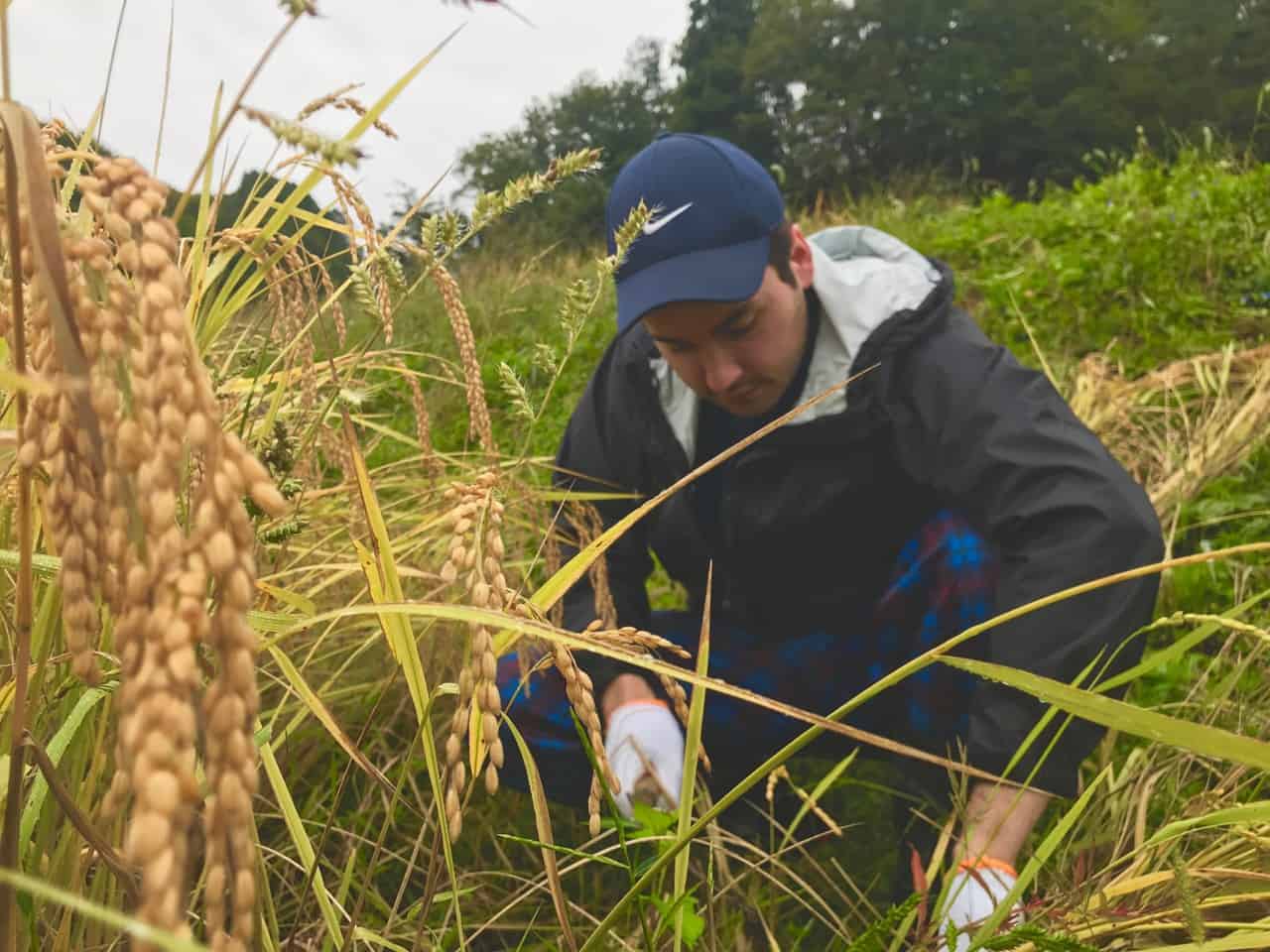 Few would consider the former castle town of Murakami, Niigata, a metropolis. But the town may feel like one after arriving in Takane, a nearby village tucked away in the region’s mountains. With a population of just over 9,000, Takane is accessible in under 45 minutes via bus from Murakami Station and offers a full immersion into pastoral Japan.

I was joined by just four passengers as our bus departed the station. The sun was setting as we reached the outskirts of Murakami, passing rows upon rows of golden rice fields ready for harvest before ascending a series of mountain roads. By the time we had arrived at Takane, the last stop on the route, I was the only passenger left.

If a journey this deep into the Japanese countryside gives you a pang of anxiety, there’s no need to worry. Waiting with a warm smile at the bus stop was an envoy from Zaigomon, the minshuku (Japanese-style bed and breakfast) that would  host my one night farmstay in Takane.

Zaigomon’s accommodations in a traditional Japanese home provide a genuine look into the life of a rice farmer and his family. The minshuku may be commonplace when compared to a lavish ryokan (traditional inn), but what the home lacked in luxury it more than made up for in hospitality.

A friendly Portuguese couple was spending the night in the house’s one guest room, so I was put up in the apartment next door, stocked with a full kitchen and bath, along with a futon and a collection of nearly three dozen dusty jazz, blues and soul records. The last thing I expected to find in Takane was Percy Sledge’s entire discography on vinyl.

After the grandma of the household gave me a full tour of the facilities, I joined the Portuguese couple for a multi-course, home-cooked dinner. The main entrees were tonkatsu (pork cutlet) and oden—an assortment of ingredients (eggs, daikon, fishcakes, konjac) boiled in a light, soy-flavored broth. Alongside these heartier dishes, we were also served pickled eggplant, miso soup, cabbage rolls and a bowl of white rice from the farm’s own harvest. My favorite, however, was dessert: a thick creamy kabocha (winter squash) pudding.

After retiring to my room, I heard a knock on the door from the farmer of the house, just returning from a long day in the fields. He invited me to join him at his neighbor’s home for drinks. We ended up talking late into the night while tasting sake from regional Niigata breweries and enjoying otsumami (drinking snacks), including dried salmon, Murakami’s most famous food product. One couple had met in Tokyo as employees for the camera company Cannon. Sick of long train commutes and taxing office hours, they left their salaryman jobs and moved to Takane, choosing a way of life they describe as more friendly, peaceful and closer to nature. Despite the beauty of the natural surroundings and my excitement for the rice harvesting experience the following morning, learning about the lives of these rice farmers over Niigata sake will be my most precious memory from Zaigomon.

An early morning wakeup was followed by a strong cup of coffee and a filling breakfast spread, including salmon, miso-doused vegetables, and more Zaigomon white rice. Adventurous eaters could also enjoy the intensely sour umeboshi (pickled plums) and natto (fermented soybeans). From the dining area we enjoyed a clear view of Takane’s lush green mountains.

Soon we hopped in a van and joined the other farmers in the fields, just a short ten-minute drive from the minshuku. A full-fledged family effort, the grandmother of the house joined us in the fields alongside the father and their youngest child, who played hide-and-seek in the tall grains. Late September through October are peak rice harvesting season in Takane and some of the busiest weeks for the region’s farmers. As part of my farmstay at Zaigomon in late September I was able to join in the harvest, and learn firsthand the process that takes these fields of grain and transforms them into polished white rice.

Harvesting begins at the corner of each plot of land, where a square section of rice crops are harvested the traditional way, by hand with a simple sickle. One of the local farmers walked me through the process, helping me fine-tune my technique. It’s important to pack long pants and sleeves for this activity, but Zaigomon provide boots and gloves to ensure you remain dry working in the muddy rice fields.

For hundreds of years rice fields in Japan were harvested entirely by hand, but today most harvesting is done by machine. After cutting down a large square area of the rice plot, the harvesting machine is driven into the opening, where it begins the process of pulling up the crops and processing them down to essential grains that will be transported to the nearby milling warehouse. Milling machines will then clean the grains overnight, reducing and polishing them into fine white rice.

Most may assume this heavy machinery would be off-limits to a novice, but the farmers walked me through the simple controls for maneuvering the harvesting machine. With plenty of guidance, I was able to get behind the wheel and harvest one entire plot of land, at times driving the machine entirely on my own. After a long day in the fields, where hard manual labor was interspersed with friendly small talk, I not only learned the ins and outs of the harvesting process, but I got to know the Zaigomon family and learn about life in Takane.

The opportunity to wade into the rice fields of Takane, will offer visitors to the region views of Murakami’s stunning natural scenery, but also provide an intimate look into the lives of Japan’s rural farming communities.

How to book at Zaigomon?

To make a reservation at Zaigomon, or if you have any questions, you can email yumehana.725@zaigomon.com (English available). If you any inquiries about Murakami, you can consult with the Murakami city tourism association.

If you are interested in experiencing the rice plantation, reservations are available from spring to autumn!