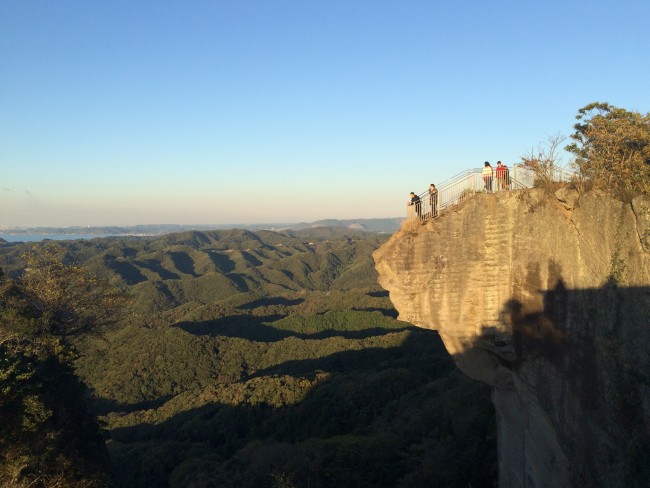 Nokogiriyama, the mountain that lets you peek down into hell

The night, after an hiking up the mountain, ended with us drinking overpriced chu-hai atop the gusty windy deck of the ferryboat. We looked up to see a single long, bright light zoom past the entire sky, surprised that it didn’t end with an explosion on the bays of Kanagawa where we were headed. All the times camping in the backwoods of the U.S. did not prepare me for such a memorable shooting star – nonetheless, imagine seeing it a skip away from Tokyo. It was the perfect ending to a beautiful, albeit exhaustive daytime hike: this is Nokogiriyama mountain.

A mountain located in Chiba prefecture with multiple hiking routes, rich religious history, fantastic views, and furry friends, Nokogiriyama has much to offer without the hustling crowds of say, Takaosan (Mt. Takao). Most of all, its unique formations and creations in the rocks is what depicts individuality and draws most outdoor seekers here. At only 329 meters high, the mountain sits quietly at the top of the bay overlooking onto foreign prefectures with an excellent view of Mt. Fuji above sparkling seas.

If you’re ready for a full day of hiking up and down the mountain, by all means, go ahead. But what I found more rewarding was taking the cable car up to the top, as it gave me a more chilling reality of feeling small above Hell’s Canyon and curious cutouts on the side of the mountain that I would not have been able to spot if I were hiking on the ground. This also saved time, allowing me to be more attentive to the sites on the mountain without the worry of the clock ticking away. 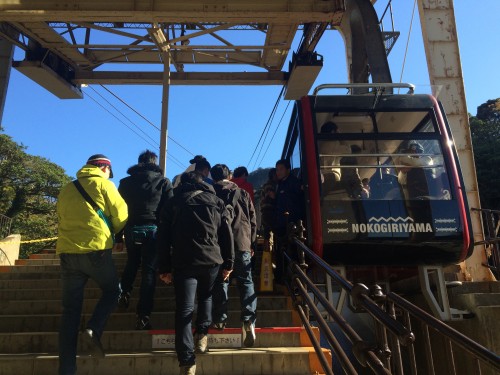 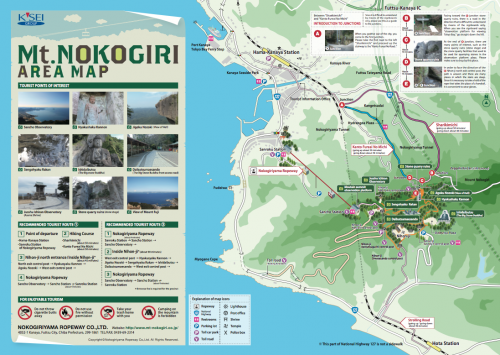 The cable car bids you farewell at the Sancho Observatory, surrounded by breathtaking views and fresh, clean air to breathe back in. A family of cats live up here as well, which was a sweet treat for a cat lover like myself. There are also picnic benches to rest or snack at, though there are much more remote bench areas than the observatory that are better for enjoying packed lunches. With the surprising lack of food vendors for a Japanese hiking spot, I highly recommend bringing your own food to munch on. 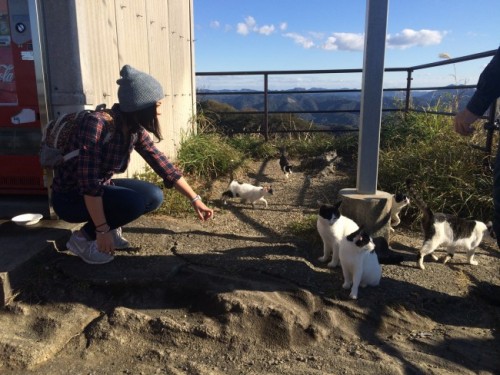 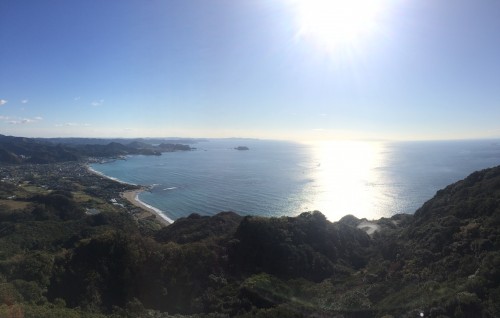 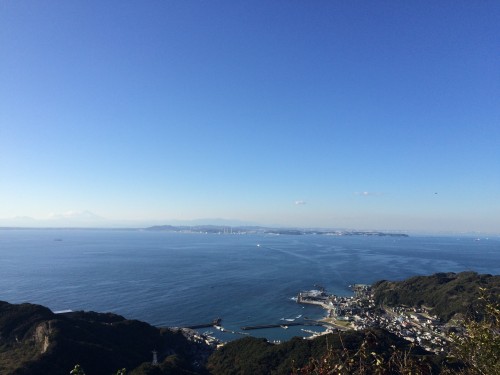 The stoney hiking paths spiral through calming greenery and hundreds of Buddha statues called Sengohyaku rakan. Each one of the statues depict different humanistic characters and expressions that hours could be spent just studying them one by one. Their greetings all lead down to one of the biggest stone Buddha statues in Japan, Ishidaibutsu (The Great Stone Buddha). Located in an open field, this is yet another nice picnic spot. There are also small and big shrines here where visitors can pray. Though the Ishidaibutsu is well-known in association with Nokogiriyama, the best attractions are up towards the top, and at the expense of climbing back up endless stone steps, I would say it’s worth it. And I’ll show and tell you exactly why.

Hundreds of Sengohyakyu rakan statues lay along the paths on Nokogiriyama. Many were destroyed in a backlash of anti-Buddhist movements during the Meiji period. 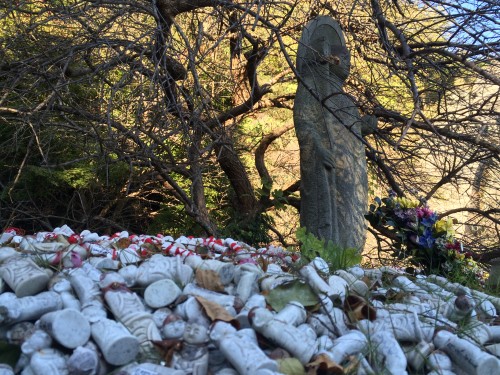 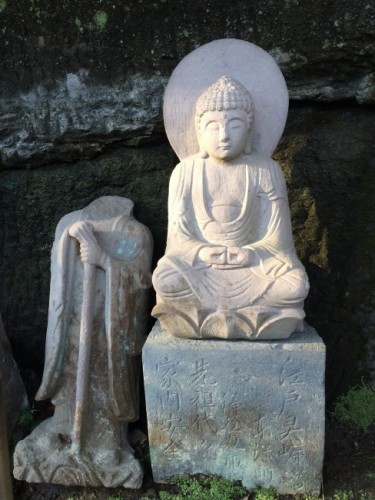 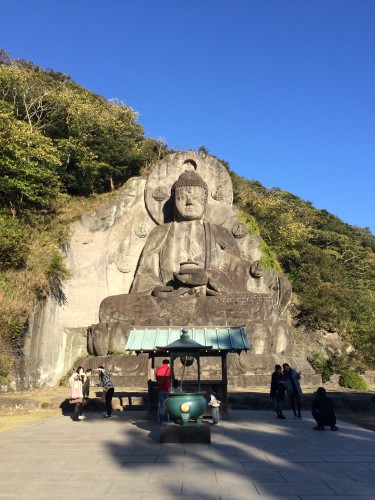 Ishidaibutsu represents Yakushi Nyorai, the Buddha of Healing. The carving began in 1780 and took three years to complete.

Climbing back up the mountain a different route, you’ll reach the back side of the mountain where the view below will give you even more chills, sans the protection of the cable car. This is the View of Hell, Jigoku Nozoki. With metal rails in sweaty palms, it’s worth a look. When the sun starts to sink low, it’s more mesmerizing than fearful. Peering at the shape of the overhanging rock from a viewpoint less than 10 meters (33 feet) away, you’ll notice the distinct saw-tooth shape: the origin of the mountain’s name. But turn your body over to face the ocean from this viewpoint and you will be able to catch a beautiful sunset and Mt. Fuji over the glistening orange shores. I did not stay at this viewpoint long enough to watch the entirety of the sunset, though I now wish I did. However, I was able to sneak in one more stop to take the fascinations with me on the road home. 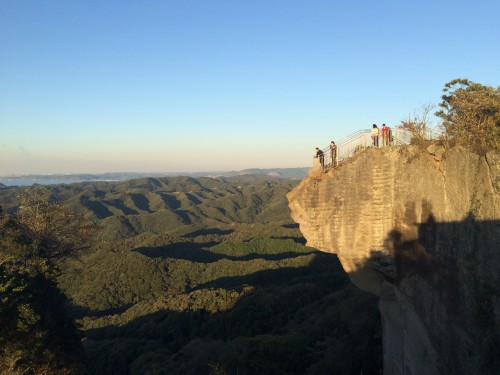 Jigoku Nozoki: The View of Hell. 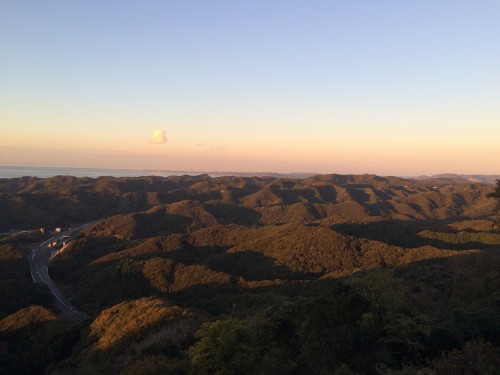 The descent down into the backwoods of the mountain was mystical in itself, only to be welcomed by a surprisingly huge carving of Hyakushaku Kannon.  Standing over 100 feet (30 meters) high on her pretty lotus petals, one could share thousands of stories with her just by exchanging a few gazes. Representing the Goddess of Mercy, she was carved in remembrance of soldiers killed in World War II and civilians killed in accidents such as car crashes. It was particularly haunting to see some names carved out in the the stone walls nearby to honor such deceased loved ones. The carving’s presence again reminded me of how little we are in this world, surrounded by nature. It’s astonishing to think of how much history is cultivated on a mountain so small compared to its counterparts. As I scurried down Nokogiriyama to make it down before complete darkness, all I could focus on was not missing a narrow step and tumbling down the mountain all the way. But while eating sushi and meandering through the gift shops by the ferry dock, I reflected on how much of a great getaway to peace this day-trip was from Tokyo. The shooting star at the end was just the cherry on top to remind me of the great wonders of nature Japan has to offer. 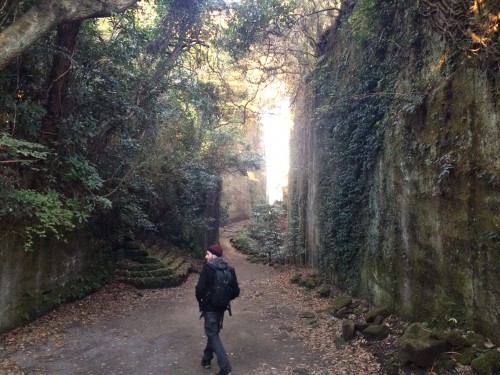 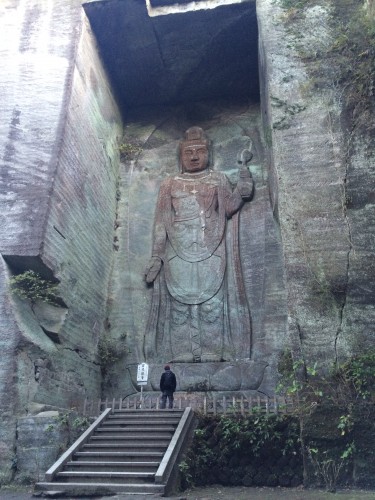 Hyakushaku Kannon was carved out during the first half of the 1960s. 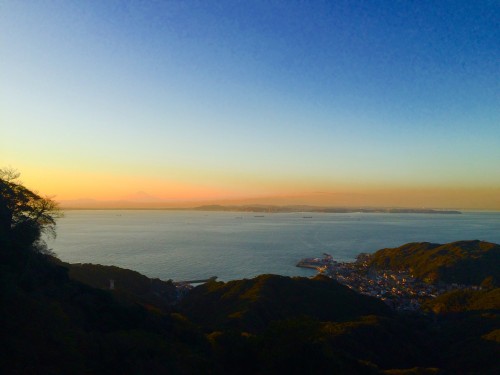 Sunset on the hike down Nokogiriyama.

From Tokyo Station take JR special express Sazanami to Hamakanaya Station, walking distance to the mountain from there.

From Shinagawa or Yokohama Station take the Keikyu rapid to Keikyu-Kurihama Station, walk 20 minutes or take a bus to the Kurihama Ferry Terminal to catch the Tokyo Wan Ferry to its destination, Kanaya Port.