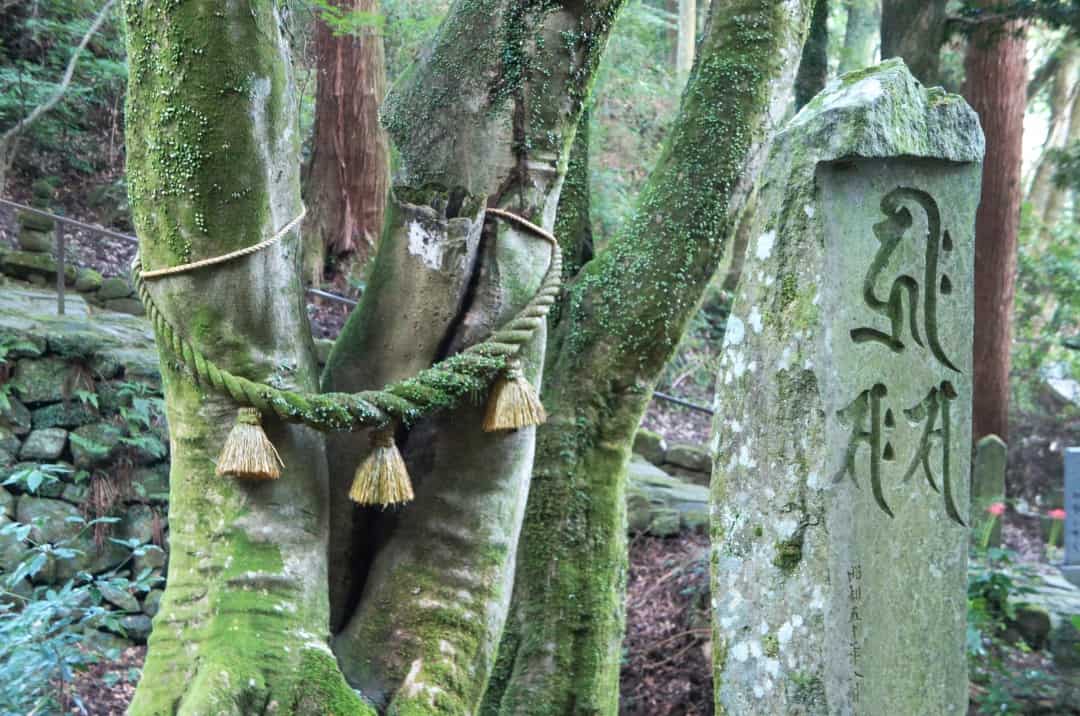 Kunisaki Peninsula (Oita prefecture, Kyushu island) and its Futago-ji is best known as one of the birthplaces of a particular form of worship. It was here in the Rokugo Manzan region, with its special spot in Mount Futago, that a syncretism between Shintoism and Buddhism formed. This thus gives a particular identity to the 31 temples and sanctuaries found here, and to the Kunisaki mountains a more spiritual atmosphere. Combined with the very numerous stone statues, some of them 1300 years old, the mountain is truly sacred.

Shintoism and Buddhism Syncretism in Kunisaki

The history of the religions of Japan is quite an intricate subject – certainly one that I cannot claim to have mastered. Yet I would like to try to describe what makes Rokugo Manzan’s spirituality so special.

The mountain worship religions seem to be as old as Japan itself. This is not surprising considering the fact that mountains cover the Japanese landscape. Mountains are sanctified and stand as gods themselves. This deification is called Sangaku Shinko. In Shintoism (Japan’s native religion), the mountains are home to the Kami (gods) and thus are sacred places.

Buddhism first came to Japan in the 6th century. Rather than competing with the other already present local worships and beliefs, a cohabitation formed. Shintoism incorporated Buddhism elements and Buddhism fed on local Shinto beliefs. This practice is called Shinbutsu Shugo.

It was this syncretism that dominated in Japan until the establishment of Shintoism as the state religion, starting from the Meiji Period (1868 – 1912). Although today Shinto and Buddhism worship are usually clearly separated and identified,  some elements reminiscent of this syncretism remain in the temples and sanctuaries today, as well as in the practices. At Rokugo Manzan and Futago-ji we can clearly observe this history.

While Shinto worship sanctifies the mountain, Buddhism also makes use of it as a place for religious practice. The ascetic monks Yamabushi, or “those who sleep in the mountain”, choose the mountains as a training ground for spiritual development. Here, they practice ascetic retreats, as well as fasting, mediation, and walking. Most interestingly, they also performed endurance exercises such as standing under a frozen waterfall or sitting in the snow while reciting the sutras.

Futago-ji temple (両子寺) is considered Rokugo Manzan’s spiritual center. This huge temple consists of multiple buildings and is situated in the center of the Kunisaki Peninsula. Being located on the side of Mount Futago, Futago-ji is a nice place to take a walk, especially during the autumn season when the changing of the leaves occurs.

Founded in 718 by Ninmon Bodhisattva, Futago-ji is a Buddhist temple rather than a Shinto sanctuary as indicated by the “ji” suffix ( 寺 in Japanese kanji). Legend says that Ninmon Bodhisattva carved the 69,000 stone Buddhas himself. Yet whilst Futago-ji is a Buddhist temple, all the specific elements of a Shinto sanctuary can be found inside its enclosure. Thus it is here that we can truly see a coexistence of Buddhism and Shintoism.

Futago-ji: A place of Religious Syncretism.

Futago-ji’s main entrance is well-protected by two nio statues. Nio are huge stone statues that serve as guardians of the entrance to a Buddhist temple.

But surprisingly the main gate of the temple is also decorated with a shimenawa (a rope of rice straw) and some shide paper flames. These elements usually symbolize the main entrance into Shinto sacred places. Therefore things become more clear now. Futago-ji is really a high place of syncretism.

More obviously one can notice the rope hanging from the large stone torii into the temple enclosure. A torii is the gate that symbolizes entrance into a Shinto sanctuary.

Later you will again find some small nio statues at the foot of the stairs leading to an annex building. They seem to cohabit very closely to another torii.

In the picture below, notice the shimenawa rope again. This time it is tied up and around a tree. That symbolizes that the tree is home to a kami – a Shinto god.

• By car: As the Kunisaki Peninsula is very rural, the best way to discover it is to rent-a-car. There are some Rental car agencies in and around Oita airport, or in Usa or Beppu. Taxis can also be used, but this may become quiet expensive.

• Via train: From Kokura station, you can take the JR Nippo Line and disembark at Usa or Kitsuki stations.

• By plane: There are direct flights from Tokyo, Osaka and Nagoya to Oita airport. As Oita airport is located in the Kunisaki Peninsula, direct buses allow you to reach Kitsuki, Usa.

To read more about Kunisaki Peninsula (places to visit, accommodations, local products), take a look at the Kunisaki Tourism Association website, here. Additionally, you can look at the Oita Prefecture’s Official website.

And you can look at the Official tour website, here.