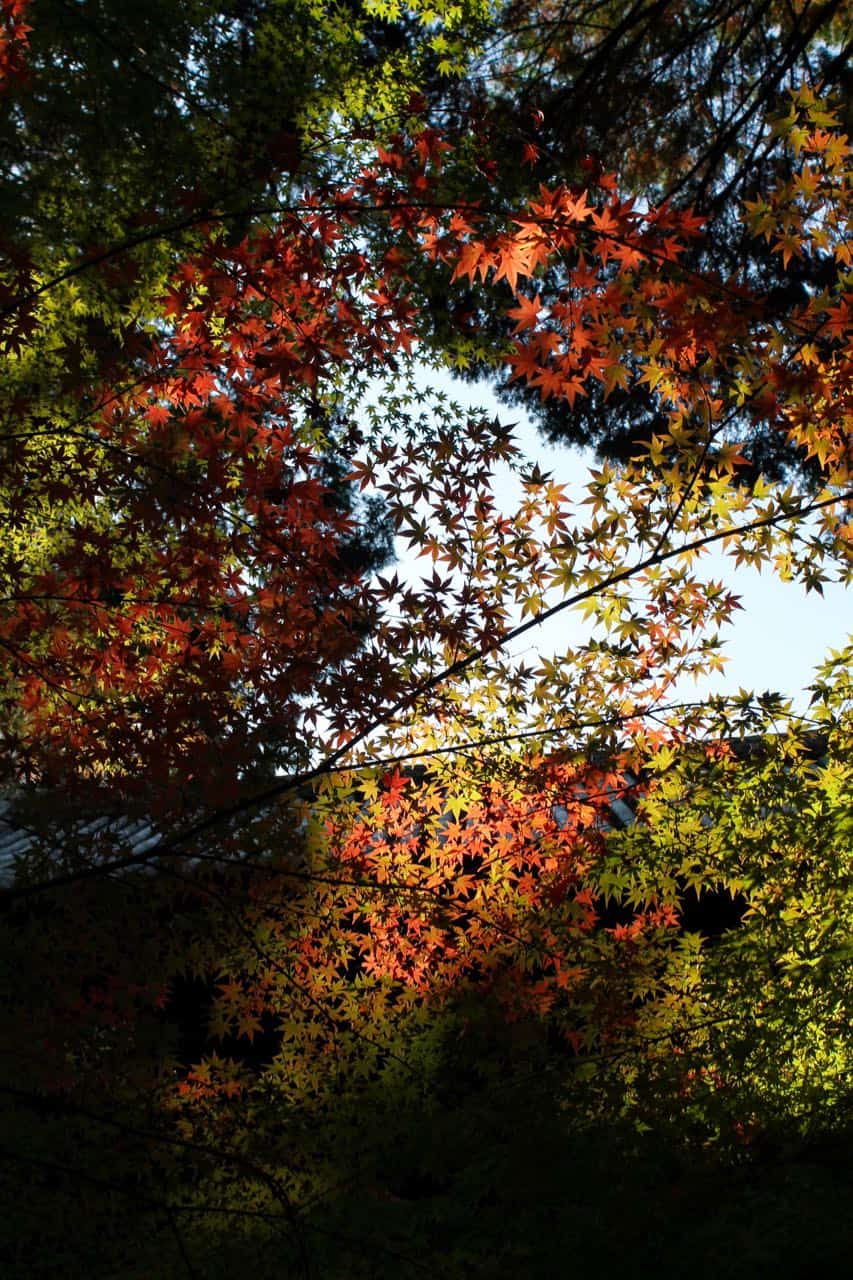 While Japan’s cherry blossom season has attained world renown, its fall foliage is at times just as impressive. The forests of Japan are cast in yellow, orange and red hues from late October through November and the colorful displays are best experienced by visiting natural destinations, traditional gardens or the grounds of temples and shrines. Okayama City is no exception. There area plenty of sightseeing attractions available for tourists on the hunt for idyllic autumn scenery. 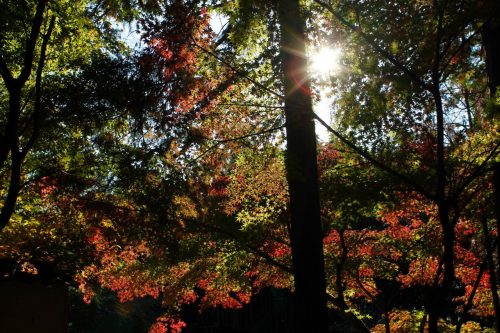 The grounds of Okayama Castle and Korakuen, one of the Japan’s “three great gardens,” are perhaps the best-known sights for fall leaves in Okayama. While these attractions have earned their reputation, they can be busy during peak season. 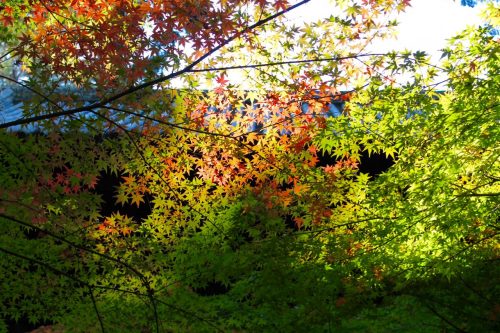 If you’re looking for a more tranquil experience of seasonal foliage, I recommend a visit to Sogenji Temple on the outskirts of Okayama City. A 20-minute bus ride from central Okayama, the temple grounds feature an array of colorful trees, including the classic red Japanese maple. 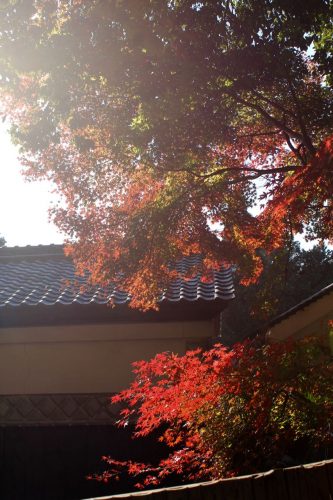 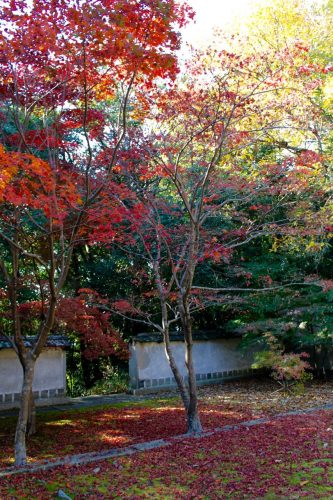 The entrance to the temple is proceeded by a long street bordered by beautiful pine trees. After passing through the temple gates you’ll encounter an impressive dark wooden sanmon gate and manicured grounds kept by the Buddhist monastery’s many monks. 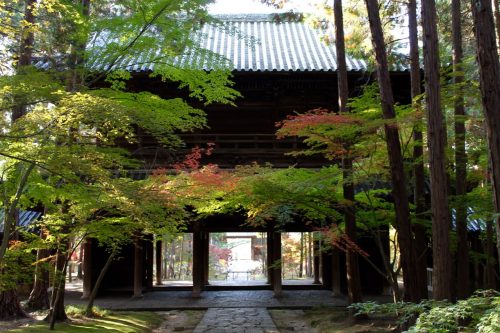 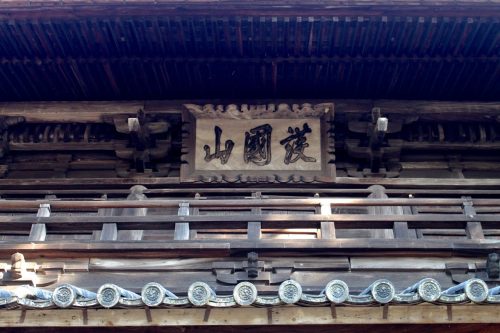 During my visit in mid-November, the lilies in the temple’s pond were long decayed and browned, but with a look up at the treetops I found on display a vibrant fall palette. It was a quiet weekday morning, so I was lucky enough to see the trees in the warm light after dawn. At times the sun would peek through the tree trunks, highlighting the uniform shape and diverse colors of the maple leaves. 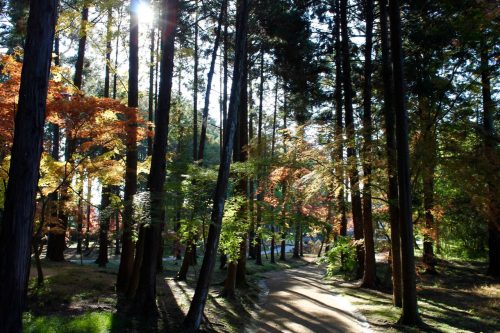 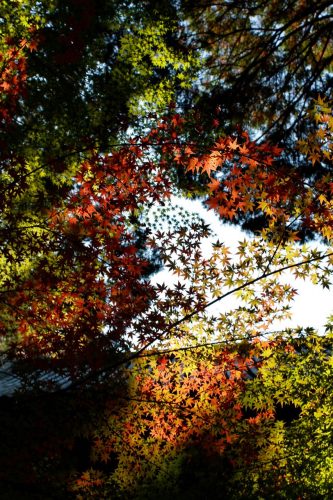 As I continued to the explore the grounds I found the entrance to a separate area which houses more natural scenery, as well a historic cemetery. There’s a wooden box next to the entranceway that asks visitors to contribute 100 yen before entering this additional portion of the temple. 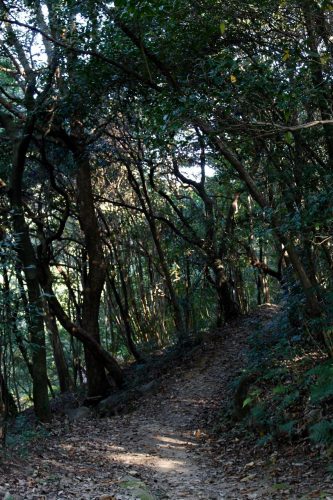 There is no designated route through this garden so it’s best to give yourself time to wander through its twisting paths up the hillside behind the temple. One of my most exciting finds during this stroll through the temple’s eastern wing was a thick patch of bamboo trees. They had clearly been growing for many years, creating a green canopy that reached high above the temple grounds. 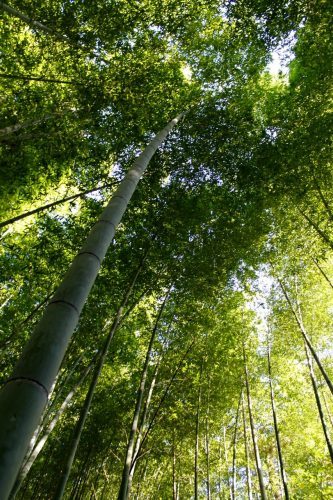 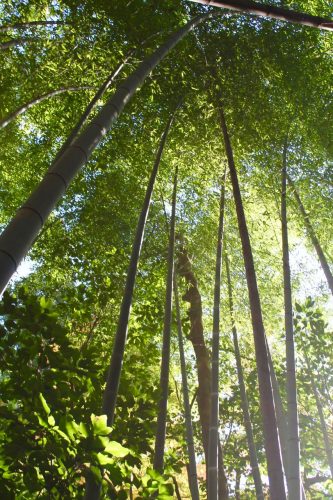 In the thicket, there was also a collection of chopped tree trunks, each about a meter long, leaning against one another in cross sections. To the untrained eye it might look like lumber storage, but the tree trunks are actually used for growing Japan’s famed shiitake mushrooms. The fungi are cultivated on stumps of trees rich in natural nutrients before being harvested. 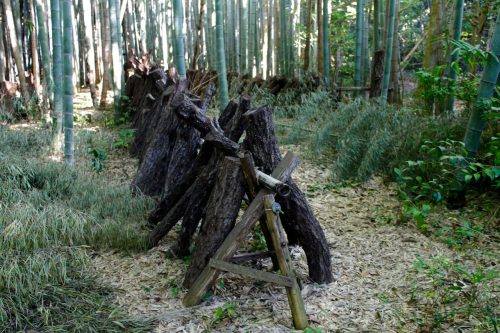 In addition to the monastery’s makeshift shiitake farm, other discoveries during my walk included a intricately-crafted porcelain lantern, which bordered the burial grounds of a member of Okayama’s nobility. 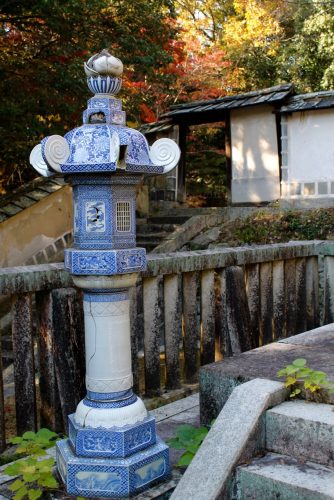 My curiosity got the better of me when I found the opening to another small trail that seemed to lead straight up the hillside. After 15 minutes of hiking through thick brush I reached a clearing and a large disused wooden pagoda. Near the summit of the hillside, I was rewarded with a stunning view of the surrounding city. I was able to catch my breath while taking in the sights. 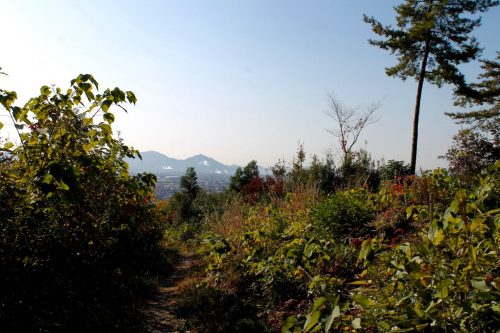 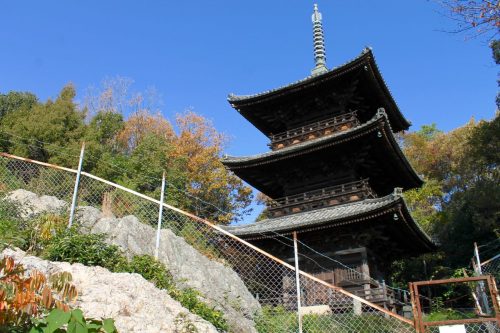 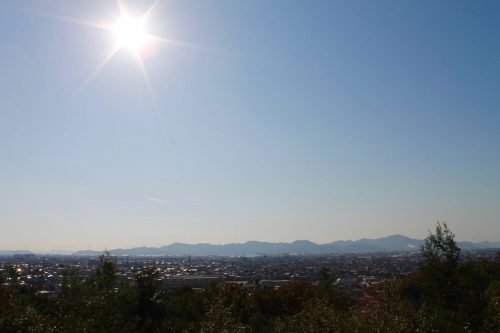 While there are plenty of hidden gems and gorgeous foliage to discover at Sogenji, the temple is actually most known for its monks. An active monastery, Sogenji welcomes men and women from around the world to study the practice of their particular school of Zen Buddhism. The chief priest of the temple once practice abroad, leading to the influx of foreigners to Sogenji. 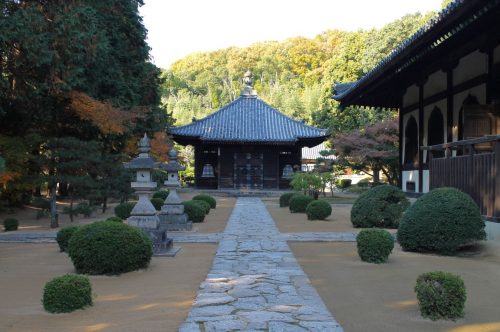 It is an unfamiliar sight, but during your stroll through the temple grounds you’ll likely encounter European or American monks with shaved heads, wearing the traditional garments of Buddhist monks. They’ve often left behind their home countries and the fixations of the modern world to practice Zen Buddhism. Most are friendly to visitors and may even strike up a conversation if they are not busy with the duties of maintaining the temple or practicing daily meditation. 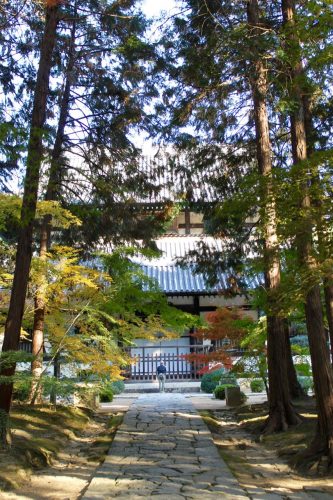 Whether you’re visiting to experience the striking autumn leaves or to witness firsthand the fascination of this internationally-minded Buddhist monastery, Sogenji is a temple well worth a visit during your time in Okayama City. The Sogenji bus stop can be reached via Tenmaya Station in central Okayama or Saidaiji Station. The pine-lined entrance to the temple grounds are just around the  corner from the bus stop. Learn more about the city’s many attractions with the official Okayama City Travel Guide.

Stopover in Setouchi: An Afternoon Stroll Through Onomichi