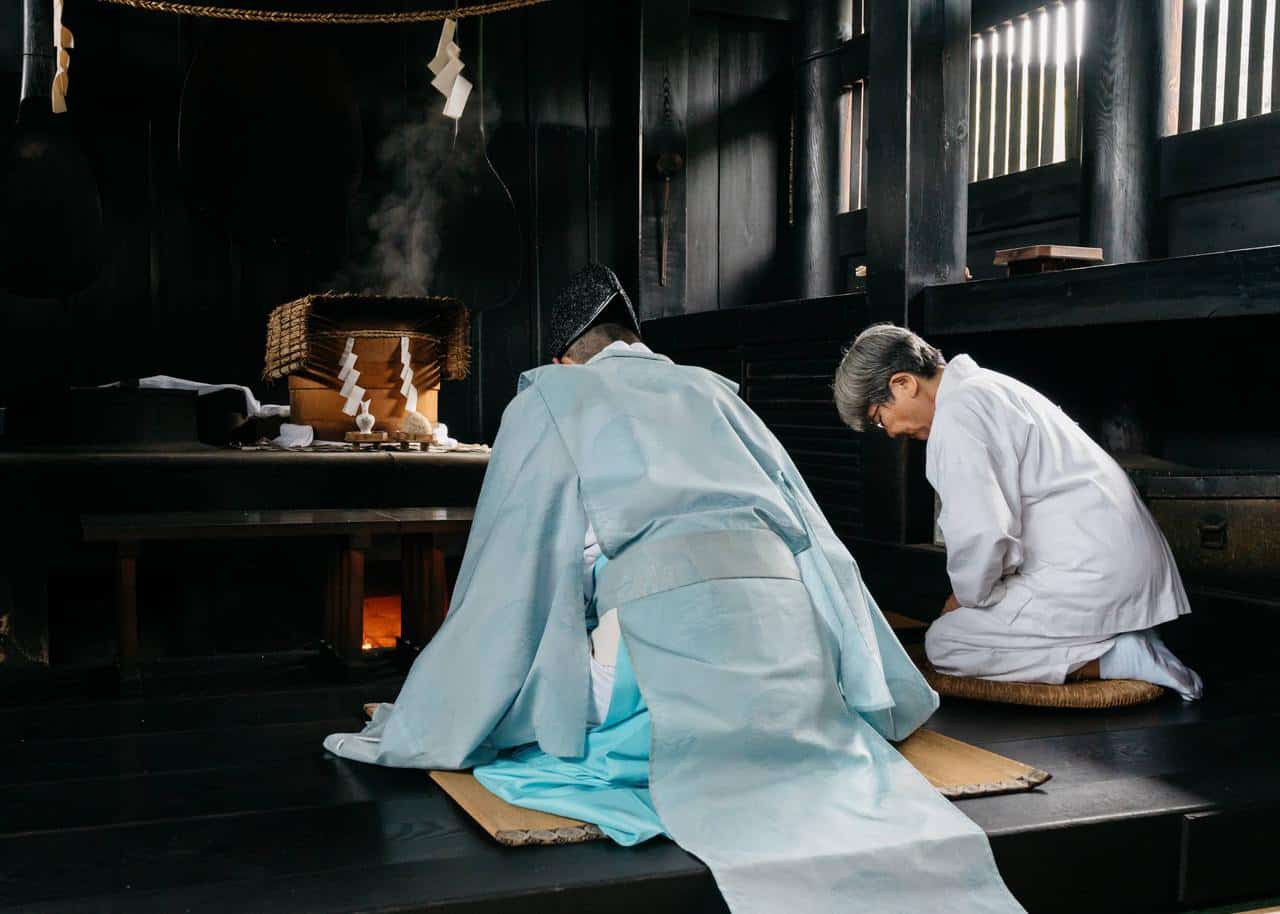 Okayama’s Kibitsu Shrine – Get Your Fortune Told by… Rice and Monsters?

The sound was a low but constant hum, startling because it wasn’t the sound I was expecting to hear. In my head, I had imagined something high-pitched, like an agonizing scream. After all, legend had it that the sound emanated from the severed head of an ogre, so perhaps that gory image crept into my imagination.

It was here at Kibitsu Shrine where I participated in the ancient ritual known as Narukama Shinji. I sat in soot-darkened Kamadono Hall, listening to a shrine priest chant my request for road safety (a constant concern navigating the narrow roads of Japan) when the sound abruptly rose from the iron cauldron. The real source of the sound is derived from the steam of rice grains as they are literally roasted in the fire-heated pot, but the legendary source of the sound is the moan from the head of Ura, the monster slain by the local hero Kibitsuhiko, said to be buried beneath the kamado (wood-burning stove) heating the cauldron.

Kibitsu Shrine is one of Okayama’s most famous shrines and is closely associated with the folk tale of Momotaro (Peach Boy), who is said to be at least partially based on the life of Kibitsuhiko, a Yamato era general dispatched to subdue the Kibi region. In particular, the story of Kibitsuhiko slaying Ura, a giant ogre terrorizing the people of Kibi, is said to have inspired the Momotaro legend.

As with many fairy tales, the modern Momotaro variant is a tidied-up version of the original story, which would likely induce nightmares in children otherwise. In the tale of Kibitsuhiko, after slaying Ura by beheading him, the head of Ura continued to cry out in agony. Kibitsuhiko burned the head, but the remaining skull continued to moan, so Kibitsuhiko buried it, yet the stifled moaning continued. Ura’s spirit finally came to Kibitsuhiko in a dream to strike a deal; if Kibitsuhiko would find Ura’s wife and have her light the fire in the kamado beneath the cauldron, Ura would stop crying out constantly and his wife would tell the future through the sound of the cauldron. A “good” sound indicated good fortune while a “poor” sound, or in the worst case, no sound at all, is a bad omen.

Ultimately, the distinction between good and poor sounds is left to the person receiving the fortune. Having no prior experience with the ritual, I decided my fortune was very good indeed, though perhaps a little biased. However, my local guide confided with me later that she had been to the ritual a few days earlier and the sound I received was much stronger and longer than the one she heard then.

If having your fortune told by a severed ogre head is not your cup of tea, there are other ways to experience the traditions of Kibitsu Shrine. A more traditional Shinto form of receiving protection through prayer is available as well, this one taking place in a different part of the shrine. Instructions in English are available for those who wish to participate in this type of ritual, which requires a donation to the shrine. You will be led into a room where a Shinto priest will chant a prayer for your request and at specific intervals, you will be asked to participate in simple ways. At the end, you will receive a wooden plaque or cloth amulet of your choosing representing whatever you asked for in prayer.

If you’re on a budget or simply short on time, you might also choose to simply pray for yourself at the main shrine. Like most other shrines, simply toss a small denomination coin into the offering bin, bow twice, clap twice, bow once, and offer a quick prayer request to the Shinto gods.

Even if you don’t want to participate in the spiritual side of Kibitsu Shrine, the site itself is a beautiful area to explore. Located on the Kibi Plain, Kibitsu Shrine is one of thirteen sites on the approximately 20 km long Kibiji cycling route which includes shrines, temples, ancient burial mounds, castle ruins and a former samurai quarter.

You can rent a bicycle from Bizen-Ichinomiya train station and leave the bicycle at the Soja station after completing the route, taking the 40-minute ride by train back to Okayama city. The bicycle itself is a utilitarian Japanese bicycle, but costs only 1,000 yen for the day and gets the job done.

The main building of Kibitsu Shrine has a double-peaked thatched roof (known as Kibitsu-zukuri) and is designated as a National Treasure. It was built on the site where the aforementioned Kibitsuhiko was said to have lived.

However, the most unique piece of architecture of Kibitsu Shrine is the 400m long covered walkway extending from the main buildings of the shrine. The priest explained that the walkway once connected Kibitsu to another shrine which is now gone. One branch of the walkway does connect the main buildings to the more remote Kamadono Hall where the Narukama Shinji ritual takes place. You will also pass a small shrine dedicated to Ebisu, god of good business.

A short ride (or longer walk) from Kibitsu Shrine, Kibitsuhiko Shrine is another shrine associated with the Momotaro legend. The affinity for momo, or peaches is evident all around this shrine, with ena prayer plaques and fortunes in the shape of a peach hanging in various locations.

Kibitsuhiko Shrine’s torii gate is flanked by two large lion dogs, unusual in both size and material; these lion dogs were created using bizen ceramic techniques first created in this area over 800 years ago. Also in front of the shrine is the largest stone lantern in Japan, standing at 11.5m in height.