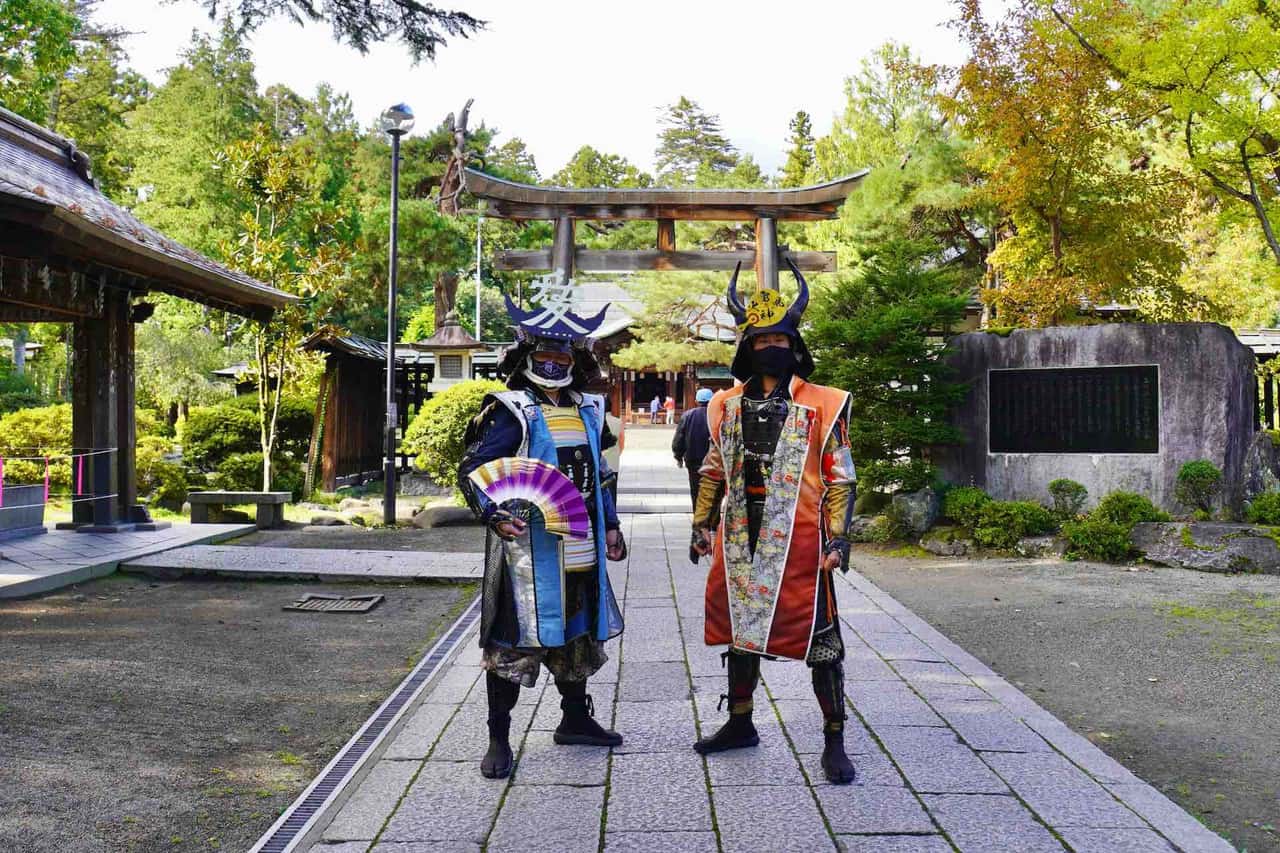 Walking in the Footsteps of Samurai in Aizu and Yonezawa

Venturing into the heartland of samurai history and culture may be closer than you imagine. If you find yourself in Tokyo’s Asakusa district, then you’ve already taken one step back in time toward Japan’s flourishing Edo period. From Asakusa station, there are easy train connections to the traditional samurai strongholds of Aizu (会津) and Yonezawa (米沢).

Thatched Roofs on the Road to Aizu

We boarded the train in Tokyo and soon made our first samurai pit stop as we gazed at misty green mountains on the horizon towards Aizu.

Ouchi-juku (大内宿) is an Edo-period post town on the historical route between Nikko (日光) and Aizu. The main street is lined with preserved houses whose thatched roofs recall the more famous Shirakawa-go in Hida, but without the touristy crowds. Houses are still inhabited by residents, while ground floors have been converted into shopfronts selling souvenir crafts, local dishes, and sake, while a few even offer the possibility to stay overnight. We took a leisurely stroll along the central walkway to the end of the road and up the stairs to a hilltop that offers an intimate overview of the neighborhood just below.

On the road again to Aizu on a rainy autumn afternoon, we saw rainbows.

Founded in 1803, Nisshinkan (日新館) was by far the largest comprehensive school for young sons of samurai during the Edo period. From the age of 10, students not only practiced martial arts such as jujutsu (柔術, unarmed close combat), kenjutsu (剣術, sword-fighting), kyujutsu (弓術, archery), and gunnery, they learned sciences, humanities, and medicine.

In addition to fancy halls dedicated to Confucian-style study, the facility still contains Japan’s oldest swimming pool (for training to cross rivers on horseback), an astronomy observatory, and an archery range where anyone can try their hand at shooting a few wooden arrows with a real bow. (I tried, and it wasn’t easy; indeed, both patience and practice are duly required to hit the target!)

Nisshinkan’s historical legacy includes the famously devoted Byakkotai (白虎隊) troop of teenaged boys who, believing that Aizu had been seized upon witnessing Tsurugajo surrounded by flames during the pivotal Boshin war in March 1868, committed suicide on Mt. Iimoriyama rather than surrender to the enemy. If one of the boys, Iinuma Sadakichi, had not survived, we might never have known their story. I was moved to see individual portraits of the 19 boys in uniform exhibited inside Tsurugajo.

Tsurugajo (鶴ヶ城) is a castle originally built in the late 14th century, now a historical symbol of samurai culture in Aizu. Although the iconic white main tower is reconstructed, many of the stone walls remain, so we could see the clear contrast in building styles, from the ancient nozura-dumi of sturdy piled stones to the Edo-period uchikomi-hagi method of cutting stones to form harder-to-climb flat surfaces.

The castle’s iron-red tinted roof tiles are visible from the watchtower observatory, along with a peaceful view of the surrounding neighborhood and green mountains on the horizon. Inside, the museum exhibition includes reproductions of many paintings and woodcuts depicting key characters and moments in the history of samurai culture around Aizu.

Later we headed off for a meal at the luxurious onsen resort hotel Ookawaso (大川荘), nestled in Aizu’s lush hot spring valley. Its majestic lobby was a sight in itself, with wooden tables, lattices, balconies, stairs, and running water centered around an intimate square stage where traditional Japanese music is performed daily on the three-stringed shamisen.

We had the privilege of dining in a private tatami-floor room, which set the stage for a live samurai sword performance of Kengishu Kamui (剱伎衆かむゐ) in front of a landscaped private garden. Kamui’s spectacular show was both an entertaining display of kenjutsu swordplay and an artful expression of samurai values such as loyalty, respect, and humility. Our lunch was an exquisite multi-course meal featuring fresh seafood, sukiyaki beef, and dainty desserts.

Built on the site of Yonezawa’s Matsugasaki castle ruins inside Matsugasaki Park, Uesugi Shrine (上杉神社) is a popular power spot, cherry blossom site, and the samurai centerpiece of present-day Yonezawa. The main shrine is dedicated to Uesugi Kenshin (上杉謙信) as one of the most powerful warlords of the Warring States period. His martial influence runs deep, as even the main Maizurubashi bridge is decorated with flags bearing the kanji 毘 (bi) and 龍 (dragon), representing the powerful Buddhist deities Bishamonten and Fudo Myoo, whom Uesugi Kenshin revered.

Also on the grounds are statues and a separate shrine dedicated to Uesugi Yozan (上杉鷹山), who became the feudal lord of Yonezawa at the age of 17 and went on to economically reform the Yonezawa domain through political innovation in democracy.

No doubt Uesugi Shrine has special meaning for Yonezawa residents, as during the course of our promenade we encountered a couple posing for wedding photographs, children wearing kimono for Shichi-Go-San (七五三,  literally “Seven-Five-Three”) ceremonies, and friendly locals simply out for a walk with their dressed-up dogs.

Denkoku no Mori (伝国の杜) comprises a museum and cultural facility dedicated to the history of the Uesugi clan and traditional performing arts, featuring a movable Noh stage in the lobby. I was particularly delighted to see that it is also hosting a concert by the excellent Aun J Classic Orchestra, who play contemporary music using traditional Japanese instruments. Its art collection includes the Uesugi Rakuchu Rakugaizu Byobu, a national treasure folding screen depicting Kyoto and the surrounding area around 450 years ago, which was gifted to Uesugi Kenshin by the famous samurai warrior Oda Nobunaga.

We were also greeted with an energetic taiko performance by Minyo Ikka (民謡一家) right on the plaza, who played a combination of traditional folk songs and contemporary rhythms. After the show, we tried our own hands with the bachi, beating the drums in sync with the rest of the troupe, and even had a go striking the large O-daiko!

Toko (東光) sake is the rice wine made by Kojima Sohonten sake brewery, based in Yonezawa since 1597. The current chairman Kojima Yazaemon is the 23rd descendant of the brewery’s founder. From 1603 until the end of the Edo period, Kojima Sakaya was the main purveyor of sake for Yonezawa’s ruling Uesugi clan, and Kojima family members were eventually treated as samurai themselves.

On the day of our visit, the museum hosted a dramatic iaido (居合道) demonstration, during which a swordmaster slashed through vertical rolls of wet tatami mats as substitutes for human bodies in weight and density. Nevertheless, iaido’s ultimate goal, according to the master, is to become so inherently dominant that you avoid any fight in the first place.

How to Get to Aizu and Yonezawa

From Tokyo, take the Tohoku-Hokkaido shinkansen from Ueno station to Koriyama, then the Iwaki express bus to Aizu-Wakamatsu (3 hours). Alternatively, you can also rent a car and stop in Ouchi-juku to follow the historical route from Nikko to Aizu. From Yonezawa, the Yamagata Tsubasa shinkansen connects directly back to Tokyo in about 2 hours.

What is 義 (gi), the “right way” of the samurai? How did it evolve during that pivotal, transitional period that marked the end of the Edo-period shogunate and the beginning of the “enlightened” Meiji era?

During my short journey into historical samurai territory in Aizu and Yonezawa, I learned that samurai culture is deeply rooted in early education, that its expression ranges from mastery of martial arts to study of the sciences, humanities, warfare, politics, body, and mind, to personal values such as loyalty, humility, and integrity. Of course, each individual interprets 義 in their own way. So why not embark on an adventure into northeastern Japan to find your own path in the footsteps of samurai?