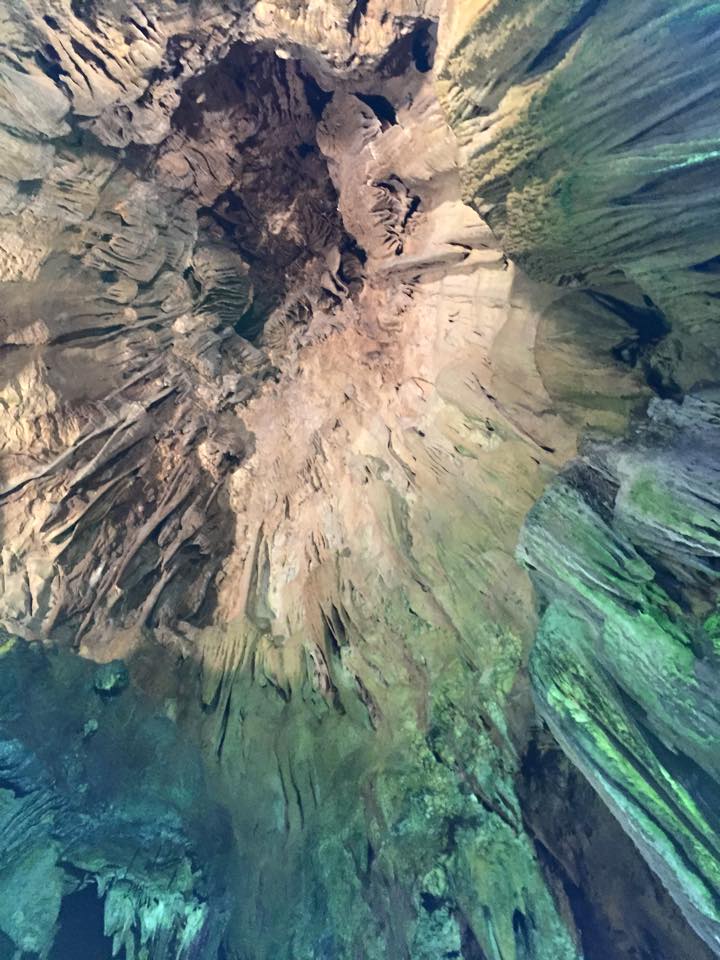 Slurped into the subterranean: walking in Ikura-do cave

The upper Takahashi valley in Okayama prefecture traveled by train offers companionship with both timber and river. The ride from Okayama station is a rumination on display, projected from the passengers: old-timers and home-bound younger sons and daughters of the inland. As the train rumbles along the riverside, the sound softens to the stone on stone of the water-worn riverbed. This wilderness whispers of trysts, a story that runs wild from a small trickle of waterfall. 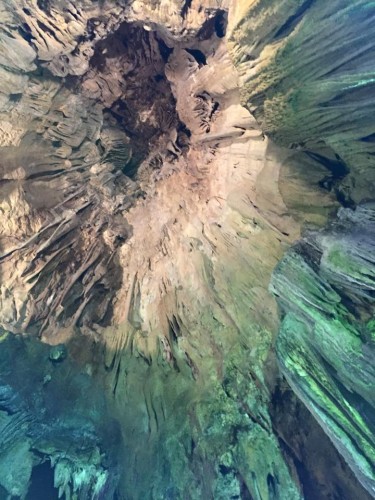 The hill hiding Ikura-do cave is solid woodland and its surface of scattering pebbles. Down that surface a waterfall jets into the coursing river. The water alone tears down the earth, absent of any other earthy excretions and only garlanded by rich greens. This constant stream waxes wonderfully under the whole hillside, surpassing a kilometer. The waterfall’s an artificial finish to the cave and its self-furnished limestone habitat; it also frames a story.

Once upon the hillside the storied Arisa stood against the lead weight of a kimono gone colorless, a life left loveless. Her lover Mosaku had become someone else, somewhere else, following a dear princess into the east. Unable to outstretch her arms to her confidant, Arisa flung her entire being to the river below. Her essence is strewn among the rock around Ikurado, and courses as lifeblood in the cave’s rivulets.

The Ikura-do caves are karst. The furrow of the river, the lip of earth gnarled out from the austere dress of woodland covering the entryway; the hillside presents itself as a cold mistress. Perhaps, with the shrine of Arisa at Ikura-do memorializing lovers, the hill and its innards were infused with the shape and recent memories of the corpse of Arisa. Whatever visceral meaning the cave has, it was intoned to us as an enchantment resonant as its organs. We parted the skirt to address the earthen organism. 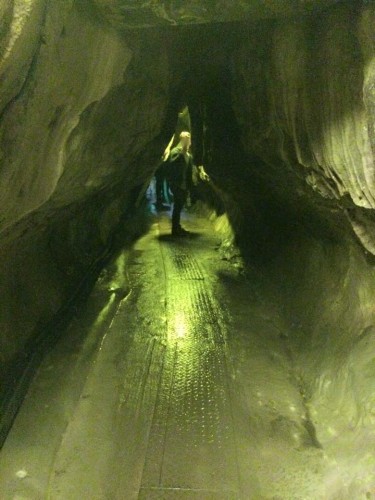 Grey to black is a calming gradient shift, like a mote of ash carried on the wind and dragged into a deep river. The darkness of Ikura-do cave where the freely lit world contracts gives you new freedom of sights, as your eyes dilate to a black pool reflection of new colors. The walls of the cave are wet, just like the floor. The flow of water has mixed with limestone and erodes with special acids. As the tunnels become the bowels of a snake, featured against the cave’s walls are accretions of acidified stone. Continue, tagged to the walls and careful of the ooze below. 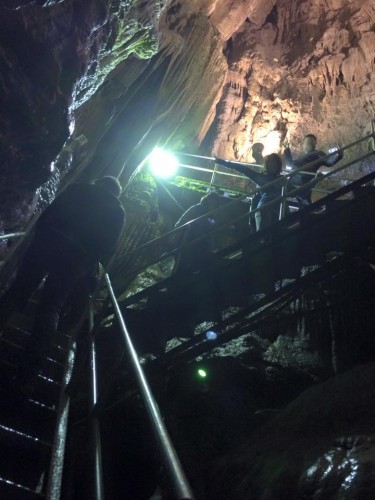 Rock rooms ceiling themselves on steep sides. Metal stairwells are precariously angled within a deep well of cave space. Feeling the autonomous pull of these cavernous insides, Ikurado distorts into abysmal inversions of direction. The rock walls are crude mirrors, twisting and stretching one’s sense of space.

Ikurado has pockets of murky humors , chemical coincidences of the cave environment. These humors weep from a deep source, but with that comes a strange humor. Each formation and small pool has a quirky description in murky ascription, like “Jellyfish Rock.” 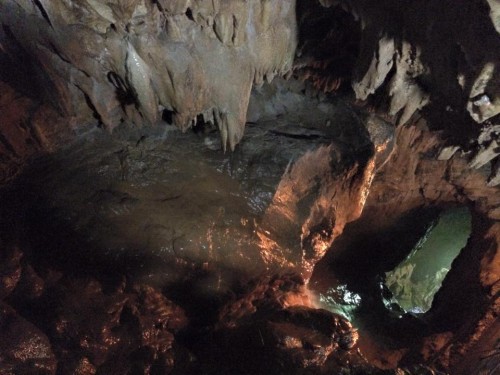 The cave isn’t a penumbral place. As you travel the vaguely tubular trail, you’ll filter through tasteful variations in light. The spotlit splotches are good ways to tease apart segments of your journey, splashing it with color. Though the cool of the cave is marked by cool and occasionally clammy coloration, it sometimes glows orange or red. One such mottle drop was gorgeous green and reeling red. I had to gaze directly into its pitfall iris, even though the attraction was peril.

The last passage of Ikura-do was a long and constricted way. Lacking much light, color or traction, be wary of slipping into the dark. Vaguely visible along the path were little alcoves like emptied lockets, formed in the meeting and parting of water and earth.

Soon comes the parting of you and the cave. Make sure your mind doesn’t get sap-slurped like a snail into the limestone way. Assuring that this will be a moment of parting, the shrine to lovelorn Arisa stands just outside upon the bank of the hill.

Take the Hakubi line from JR Okayama station to Niimi. It takes one hour by express train and costs 2,500 Yen.