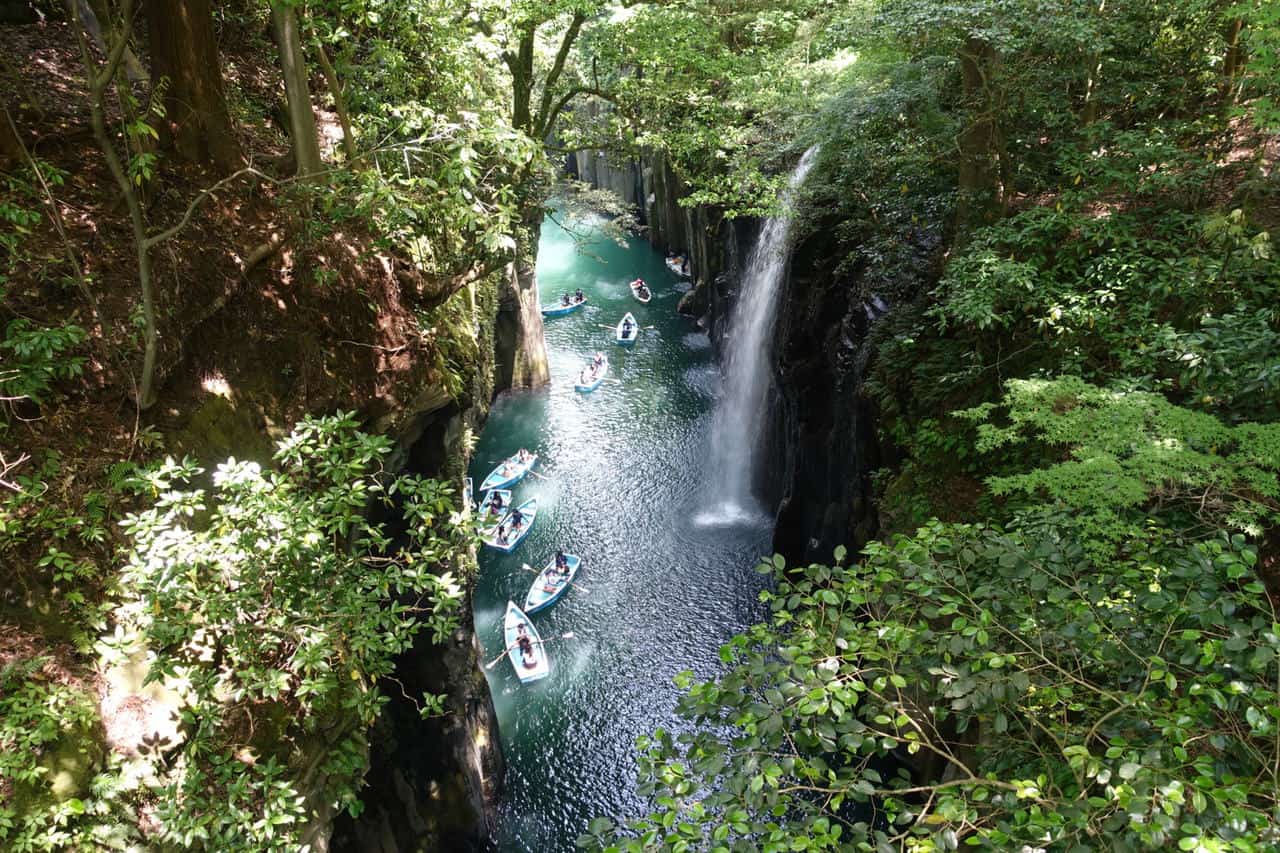 While Kumano Kodo is one of the most famous places for pilgrimages in Japan, the Takachiho area in Miyazaki Prefecture is also a prominent spiritual site.

Indeed, one of the most famous stories in Japanese mythology about the origin of Japan is said to have taken place in Takachiho. The story goes that the sun goddess, Amaterasu, hid in a cave in Takachiho to escape her brother’s cruel rampage, depriving the world of light.

There are several interesting tourist sites related to these myths you should not miss. Along with the Amanoiwato Shrine and Amano Yasugawara (the cave in which Amaterasu is said to have hidden), one of the best places for a spiritual experience is the Takachiho Gorge. This place of spectacular beauty is said to have the power to transmit spiritual energy to visitors, to heal them physically or simply to recharge their batteries. 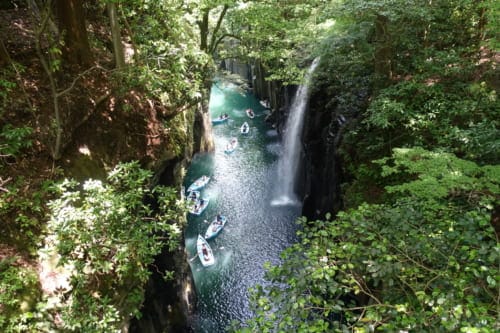 Located in Takachiho village, located near the convergence of the prefectures of Kumamoto, Miyazaki, and Oita, Takachiho Gorge rewards travelers who have made the hour and a half journey from Kumamoto airport by car. Upon arrival, visitors are greeted by the splendor of volcanic cliffs between which the Gokase River flows.

Designated a National Scenic Spot and Natural Monument in 1934, the Takachiho Gorge was formed by 4 eruptions of the volcano, Mount Aso, the first dating back 270,000 years ago. The successive lava flows formed a V-shaped valley filled by the Gokase River, which flows for about 7 kilometers. The steep cliffs are 80 to 100 meters high, made up of columns of volcanic basalt resembling the scales of a dragon.

The waters of the Gokase are so extraordinarily turquoise blue in places that you would understand why the gods would have made their home there! 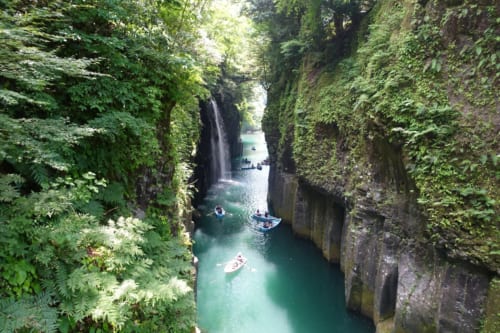 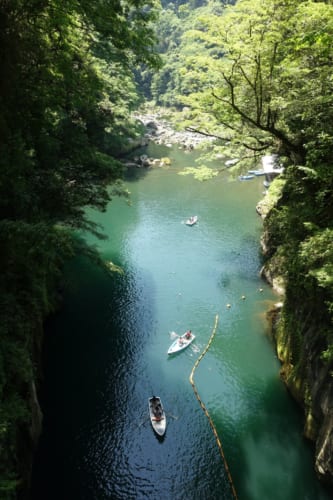 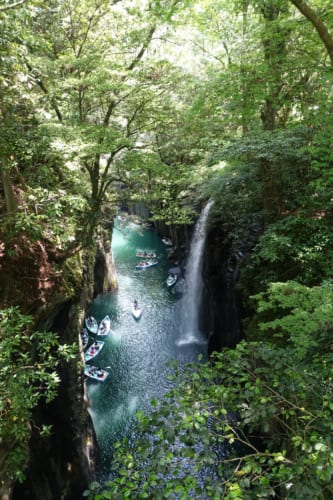 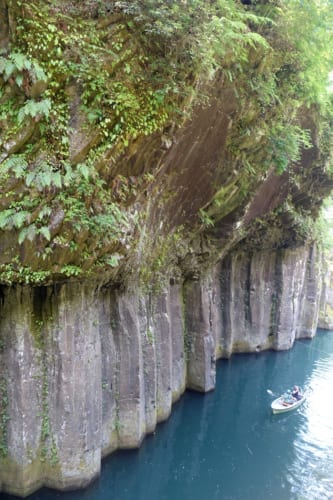 Discover the Manai Waterfall by boat

You can explore the gorges either on foot or by boat; by using both will enable you to admire the gorges from every angle. Start by boat, journeying down the river between narrow cliffs, and you can get as close as you want to the Manai waterfall. According to Kojiki (a collection of myths that tell the story of the origin of the Japanese islands), these fascinating 17-meter high waterfalls are the creation of a god called Amenomuraka, who moved them to Takachiho Gorge. The waterfall is ranked among the 100 most beautiful waterfalls in Japan.

The boat also enables you to explore at a relaxing pace while enjoying the peacefulness of the site. In some places, the sun reflects on the crystal blue water and illuminates the rocks with dancing lights. I found the place very restful both physically and spiritually. 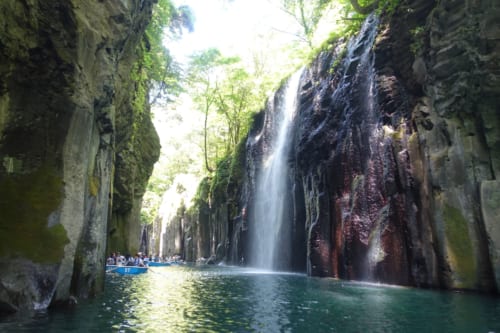 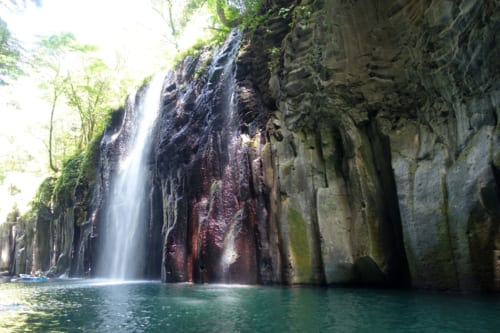 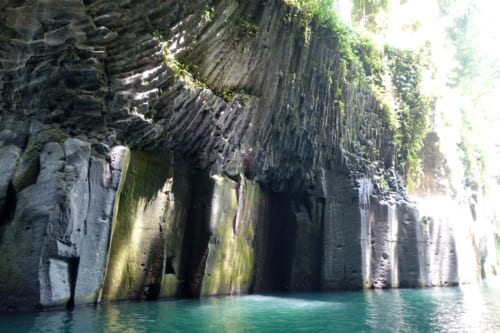 To continue your pilgrimage on foot, continue on the path along the gorge for 1 kilometer. The path starts at the top of the gorge and offers spectacular views along its length. 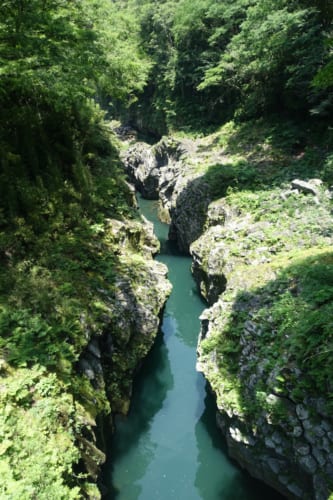 Among the points of interest on the trail is Kihachi Rock. This 200-ton rock was reportedly throwed by the god Kihachi, to demonstrate his power and challenge the irresponsible deity who ruled the village of Takachiho. 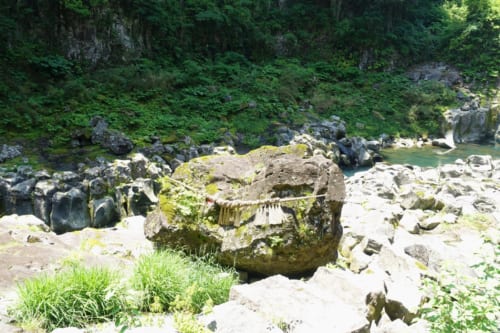 You will also see a 70-meter high cliff called Sennin-no-Byoubuiwa, which it is said only hermits with divine strength  have the ability to climb (sennin means hermit and byoubuiwa, rock wall). 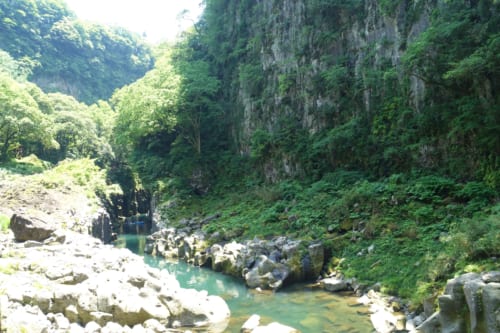 Finally, at the entrance to the footpath, there is the Onokoro-ike Bridge and Onokoro-jima Island. Onokoro-jima Island was said to be the first island that the gods created, and once included a sanctuary guarded by the sacred bird Unotori (cormorant). During the Spring Festival of the Takachiho Sanctuary, a portable shrine is brought here and must be carried across the bridge 3 times in order to be purified. 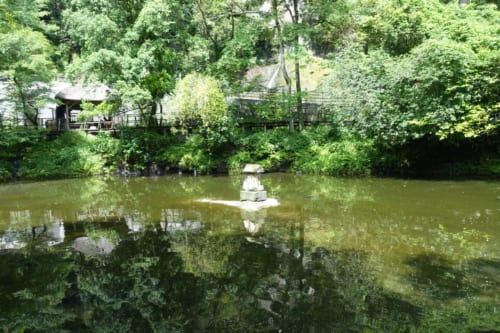 As with all Japanese tourist places, finding food options is no problem. Next to the parking lot there is an area with restaurants, ice-cream makers and souvenir shops. But if you want to get away from the crowd, take the pedestrian path to the Shin-Bashi Bridge, and you will find a restaurant where you can enjoy fresh local soba on a terrace overlooking the river. The restaurant’s location is cooled by the breeze and is ideal for a refreshing break. 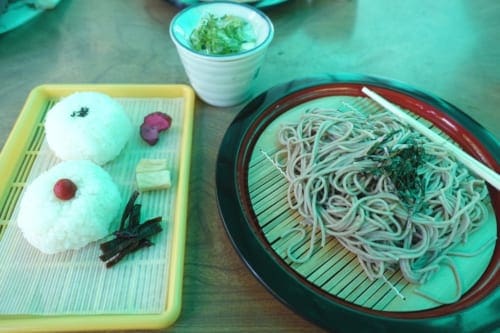