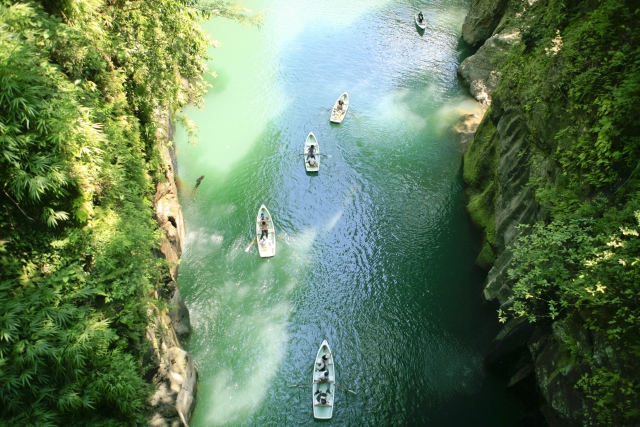 Takachiho gorge, a Walk to wake the Sun

One Miyazaki morning, waking up at a cozy guesthouse – an actual lodge of log – we hit the road and started rolling over scenic hills.  Our warm morning and lolling start was the perfect lead-in to the magnificent Takachiho gorge, nestled in the interminable green of summertime Miyazaki. 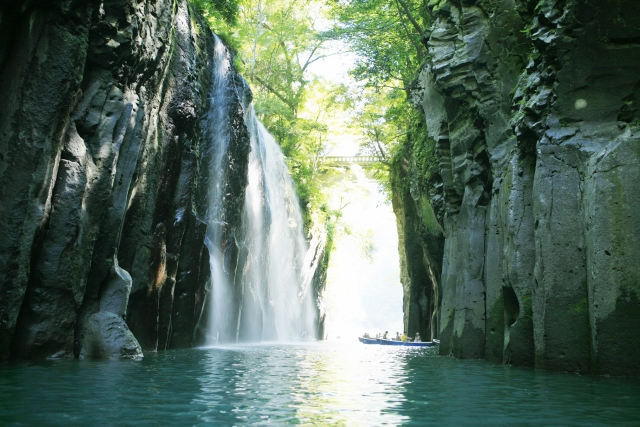 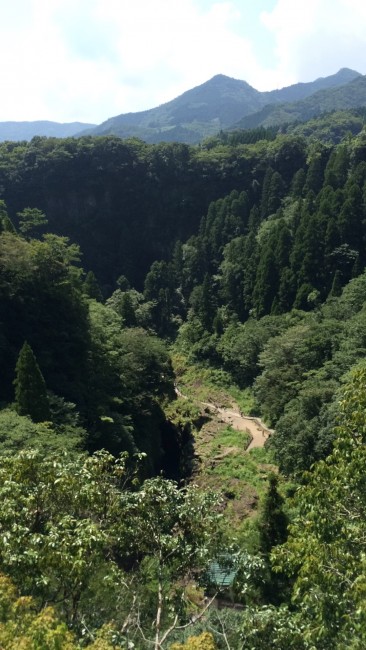 The gorge was gone in a hiding place of endless forest fairyland.  Nearing a parking area further from the gorge itself, we had left behind the scene of rice paddies and tea fields that also typify inland Miyazaki and were greeted by a torii gate set into a woodland wall of green and bark.  It was a rare invitation to a world of true concealment.

Takachiho gorge’s was a sprawling woodland of towering trees and fellow travelers wandering like mystified children fixated on the first page of a picture book.  At Takachiho shrine, where we crossed the torii, a couple of great trees were bound fittingly by Shimenawa Shinto ropes – another Shinto sign of the sacred.   This was a shrine where the presence for Japan’s greatest naturalistic divinity tangibly awaited us beyond the cusp.  Our feet on well-padded earth and our bodies in the cool beneath a great canopy, we were called to the path that gently led into deepening Miyazaki. 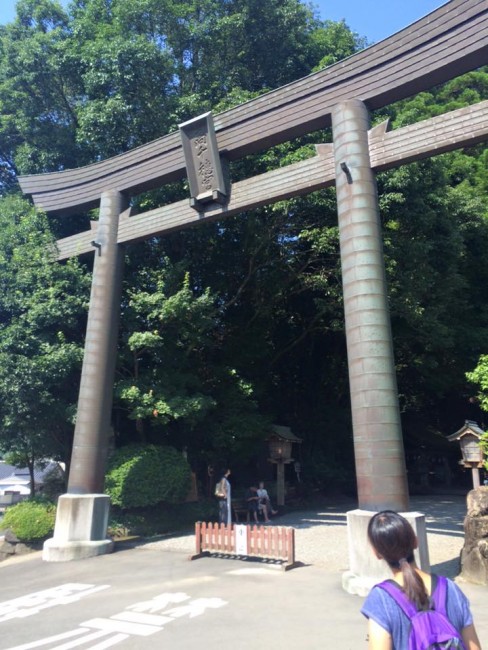 The path wound through the forest and vaguely downwards until we caught our first sight of Takachiho gorge.  Looking down with our eyebrows raised, jags of rock seemed more like flint splinters.  It was a drop.  Tracing the narrow river upstream, its origin point remained unseen.  However, across a patina bridge ahead was the beginning of a more frequented footpath, sided by an old-styled building.

Breathless meters away, we stopped over the bridged gorge to admire the sheer drop.  Crossing, the canopy opened to let in the glorious sun.  Amaterasu’s presence shone through as we started down the stairs.  To our right, the shopkeepers sold Miyazaki memorabilia.  Nudging our bodily sides were visitors climbing up from below. 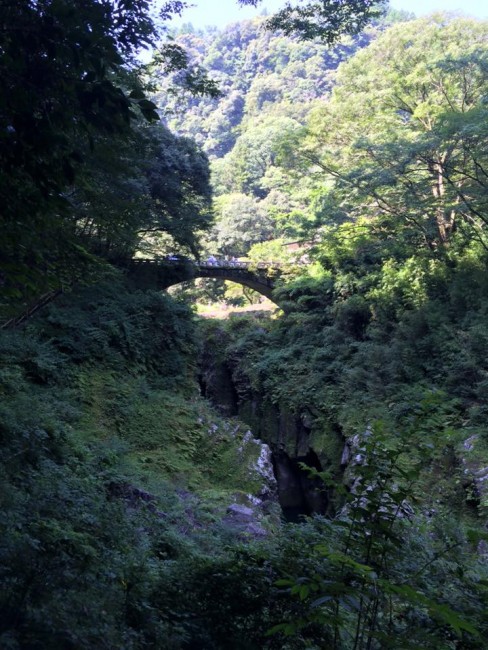 The other visitors were dotted over the spatial spread that awaited us at the base of the earthen steps.  Similar to a Zen garden, bare earth pooled into a wide area. The path narrowed over a footbridge atop Takachiho gorge, but again – for a couple hundred meters – was a wide space filled foremost by summer sun. To our left was the still-narrow gorge.  We lingered and climbed a large mound overlooking the drop, noticing a simple human complement to Miyazaki mounds of natural design in the form of a bridge held dramatically high over Takachiho. 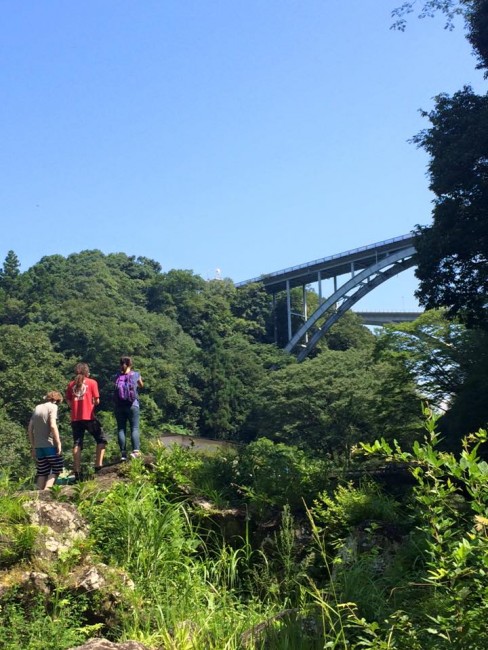 We continued over a footbridge back into greenwood as the path narrowed and woodland wanderers cozied up.  Shafts of light glittering through the trees onto the winding way were the beckoning hands of Amaterasu, and before long we were ushered before a dazzling sight.  Trees banking to our left, a robust portion of Takachiho gorge filled our eyes. 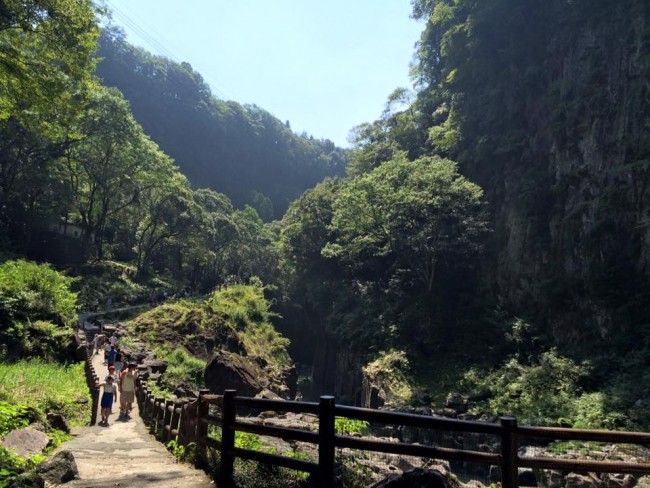 Dotting the now widened pools in the generous depth of the gorge were rowboats with people paddling in circles.  The summer light was patchy in their deeper world, replicating the ancient moment when Amaterasu had hid her daylight from the world of Japanese gods.  Above them along the top of the sheer wall, our path continued under open sky for a couple hundred meters.  Families dawdled as children yelped with excitement, and people took time for photographs worthy of the scene. 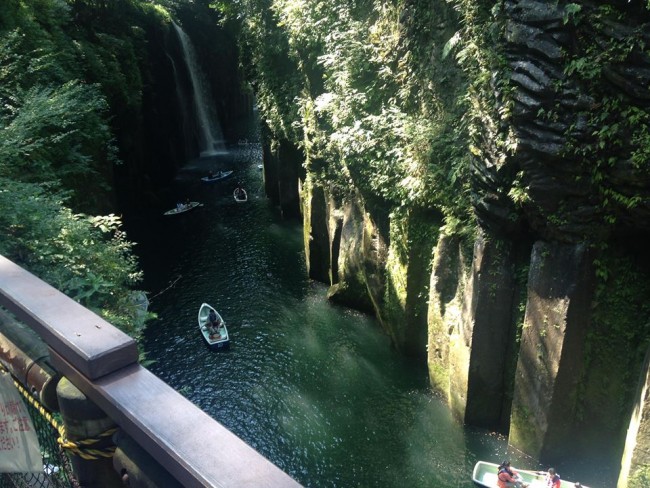 Where the canopy returned, a man-made pond filled with koi was a nice human refinement to Takachiho.  You could grab a handful of food to pepper the water with in the hopes of enticing the large fish.  Settled amid the waters was a place selling Japanese curiosities.  This was the first of a string of old-styled shacks selling souvenirs, and where the dirt footpath gave way to a narrow paved road winding over the gorge and to a sort of plaza where eateries were clustered.  We knew by our insatiable hunger for wonder that we hadn’t explored Takachiho’s natural bounty enough.  We continued past the pond area where contented parents watched children fixedly feeding fish, and by the small crowds eyeing Miyazaki delicacies.

Past the plaza the road rose to a large, uncovered cul-de-sac.  At the furthest side was a lone building.  Here you pass your coins over for a rowboat rental.  Afterwards, a stairway descended into Takachiho gorge.  This point was the furthest point we could tread with its sheer price matching the gorge brink at 2000 Yen for 30 minutes on a boat fit for three. We leaned on the guardrail overlooking the grandeur of the gorge below.  The sun complemented the view, as if Amaterasu had never been clouded by years beyond history.  A final gorge outlook glimpsed, after some moments we turned our backs to the sun and returned along our path through the woods.

From Fukuoka: direct buses from the Nishitetsu Tenjin Bus Center connect to Takachiho in 4 hours and 3 minutes (4020yen).