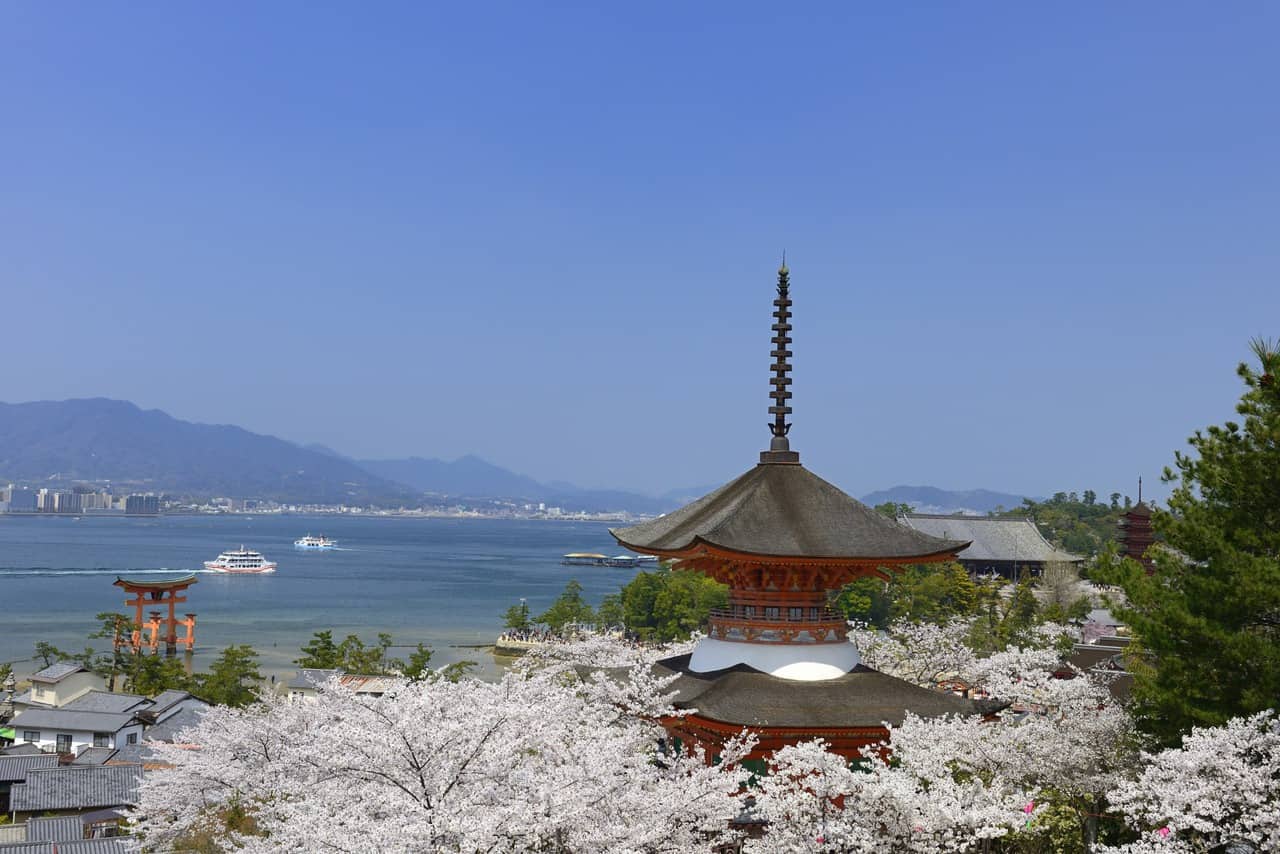 What the Auberge is in France is the ryokan in Japan. The traditional guesthouses, which have been named after the Edo Period, have always made the special charm of Japan’s hospitality. Accordingly, it is actually a must place for every traveler to spend at least one night in one of these traditional guesthouses.
The region around the Seto Inland Sea offers a large selection of luxurious ryokans, equipped with the famous Onsen baths. We would like to introduce you to the top 6 of this luxurious ryokans in the Setouchi region: 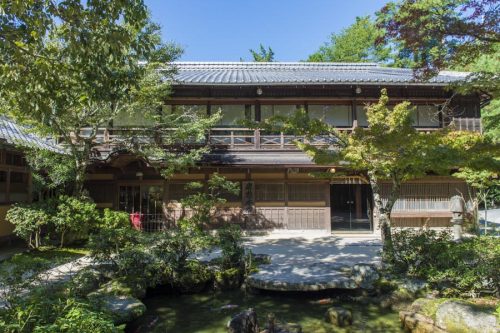 The first ryokan on our list is in Hiroshima Prefecture, on Miyajima Island, famous for Itsukushima Shrine and its floating Torii Gate. The ryokan IWASO is located within walking distance of those popular tourist attractions, but these few minutes are enough to get away from the hustle and bustle, to an oasis of peace and tranquility. 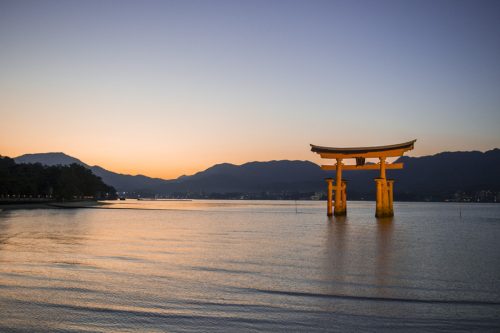 Surrounded by the unique nature of Miyajima, you can take a break from everyday life in the traditionally furnished rooms in the main building or the separate Hanare cottages and gain an experience that you will not forget so easily.
When Tamaki Iwamura, the owner of “IWASO”, leads me up the small path to the Hanare huts, I can not yet guess what will await me inside. The huts, which are rather inconspicuous from the outside, welcome you inside with their own personal charm, which you can only find in these traditional rooms. 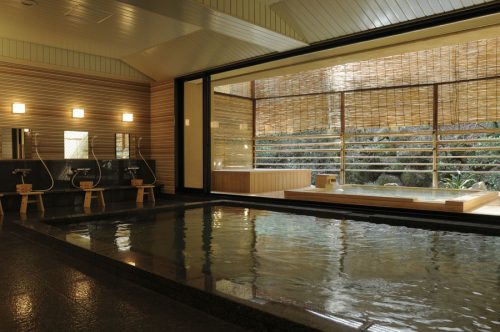 The simple elegance takes care of itself, while the tranquility of the rooms seems to merge with the surrounding nature. This simple, yet impressive elegance continues in the newly designed lobby of the “IWASO”, which combines modern with traditional elements to create an unique climate that invites you to relax.
Round off your stay at “IWASO” with its tasteful dishes made from fresh, locally sourced ingredients, such as fresh fish from the Seto Inland Sea or the famous Hiroshima oysters, before ending the day in one of the Onsen.
Let your stay in the “IWASO” take you into another world, away from the hustle and bustle of big Japanese cities! 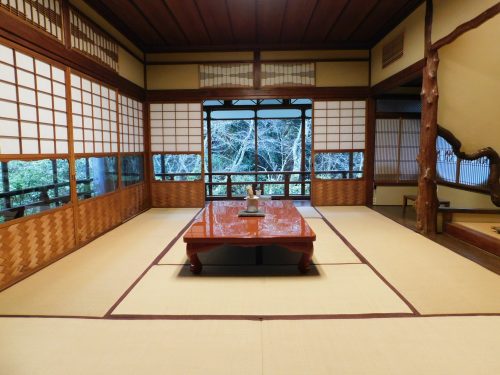 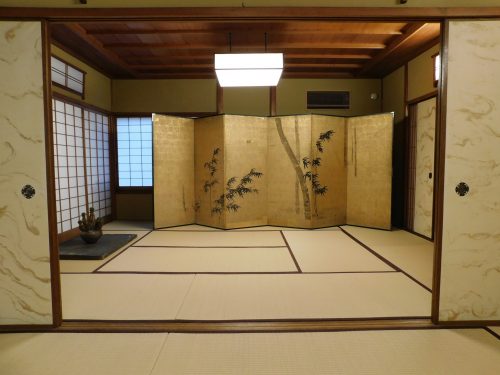 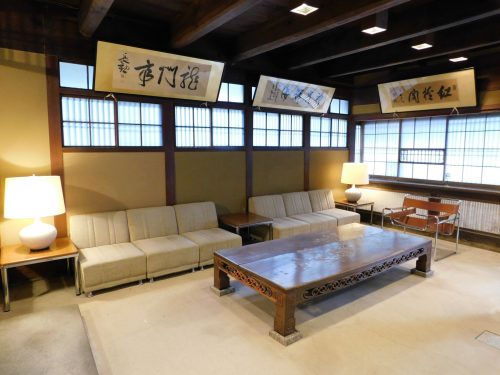 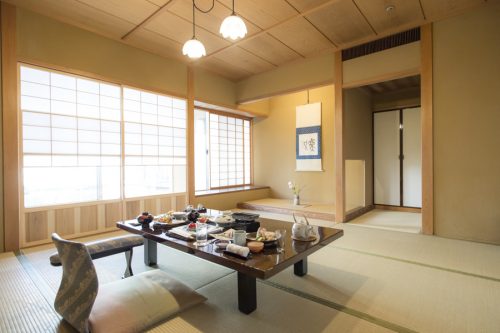 Another experience is the Ryokan Yamatoya-Honten in Matsuyama City, located in Ehime Prefecture. When booking your room, you can choose between Western and traditionally Japanese-style rooms, with the Japanese-style rooms designed with tatami mats as a small highlight. Because you shouldn’t miss the experience once to sleep on a futon. 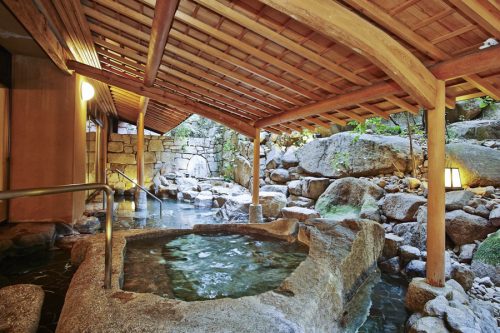 Take a break at the on-site Rotenburo (open-air bath) or at one of the nearby Onsen, such as Dogo Onsen, which is one of Japan’s oldest onsens with more than 1,000 years of history and within walking distance of the “Yamatoya-Honten” ryokan away.
Before dinner, you can experience traditional Japanese theater art in the in-house Noh Theater, where traditionally only men play. 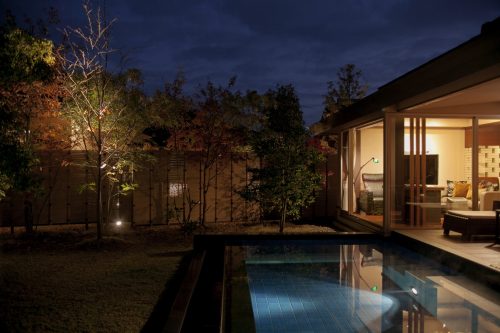 A truly special stay, you can experience at Ryokan Kokian, located in Yamaguchi Prefecture. Covering an area of 3,000 square meters, luxury awaits you wherever you look.
Already the driveway to the ryokan acts calmly and anonymously, which gives me a feeling of relaxation. This only becomes more pronounced upon entering the lobby, where I am received directly by Hirotaka Ogata, the hotel manager of the “Kokian.”
As we walk through the corridors of the guest area, he tells me that each of the rooms has its own Rotemburo, but there is also a shared onsen area divided into women and men. 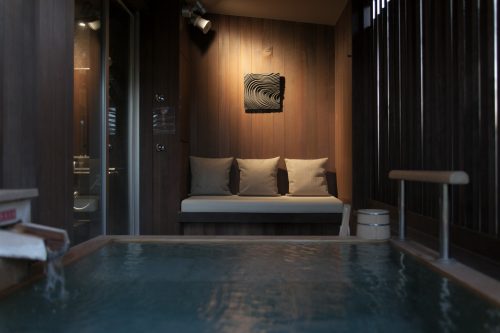 You can also relax in the large garden, which is equipped with beach chairs, a small feature that not every ryokan has to offer. This also includes the outdoor foot baths, which offer great views of the garden, as well as the Koi pond at the back of the garden. This is particularly popular with children who enjoy feeding koi-fish, as Mr. Ogata tells me smiling, because unlike many other ryokans, children are also welcome in the “Kokian”.

Nevertheless, privacy in the “Kokian” is capitalized, as is not to be overlooked when Mr. Ogata shows me the hotel’s restaurant. Again, there is the possibility to enjoy your dinner or breakfast in private rooms, which share the view of the garden. A specialty of the ryokan is its puffer fish menu, which you should not miss, as well as not the other dishes made from regional ingredients.
With its special concept of tasteful elegance, paired with Japanese elements, the “Kokian” has created an unique place of rest and relaxation in which a stay is always worthwhile! 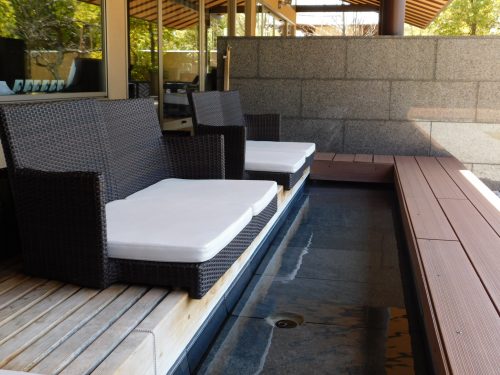 The foot bath area of Kokian. 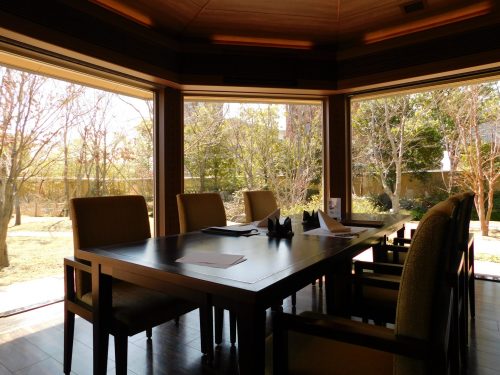 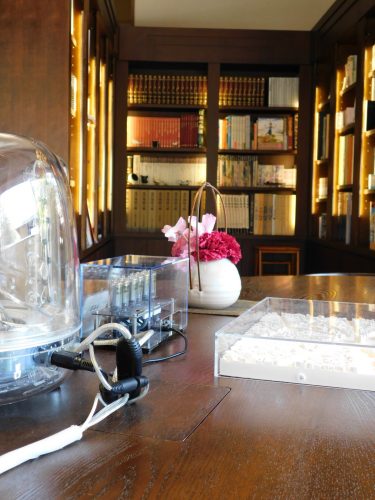 The book corner in the lobby. 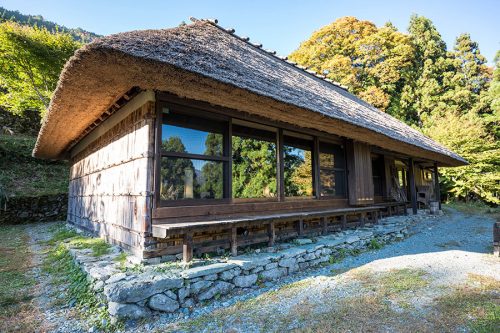 You can enjoy a different kind of luxury in Chiiori, located in Tokushima Prefecture on Shikoku Island. Built 300 years ago, Kominka – a traditional wooden house with a thatched roof – has been restored by the well-known emigrant Alex Kerr. 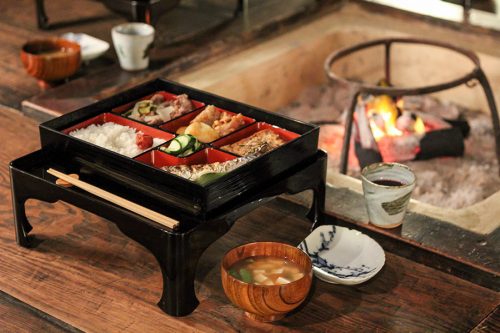 The interior of the “Chiiori” house is equipped with an Irori fireplace, a traditional Japanese fireplace set in the ground. Modern amenities such as WiFi, underfloor heating and air conditioning can also be found in the “Chidori,” giving the Japanese traditional elements a modern, luxurious trait.
The large cypress-wood bathtubs invite you to relax and unwind, while the surroundings of the “Chiiori” house, the Iya Valley, with its untouched nature, invite you to long, extended hikes.

The Ryokan in Kurashiki’s Historical District

Another Ryokan on our list is located in Okayama Prefecture, in the center of Kurashiki Bikan Historical Quarter. Kurashiki Ryokan, surrounded by former warehouses and former merchants’ homes, provides the perfect base from which to explore the city of Kurashiki and take walks along the canal, which used to be one of the city’s most important trade routes.
In a private dining room, you can enjoy the traditional “Kaiseki” menu, inspired by the four seasons, made from fresh, locally sourced ingredients, before retiring to sleep in one of the Japanese-style guest rooms, which special charm are western elements that create a unique atmosphere. 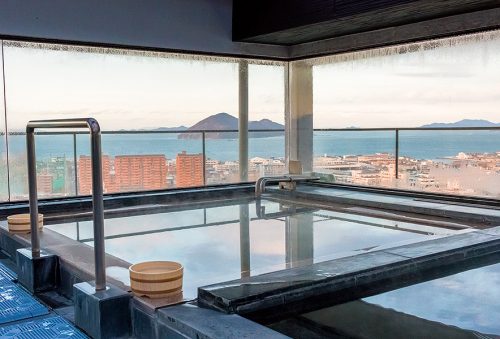 The last Ryokan on our Top 6 list is in Takamatsu City, Kagawa Prefecture. The Takamatsu Hanajukai Onsen has a natural Onsen known for its special water quality – which is particularly good for the skin – as well as a public bath and private open-air baths in some of the guest rooms. In addition to the open-air bathrooms, some of the traditional Japanese-style guest rooms have other amenities, such as massage chairs.
In the on-site restaurant, you can enjoy not only Japanese but also French cuisine made with local produce, which is purchased daily fresh from the market.
Let your stay at “Takamatsu Hanajukai Onsen” take you to another world, enjoying panoramic views of the Seto Inland Sea and the city of Takamatsu while enjoying the Onsen’s warmth.