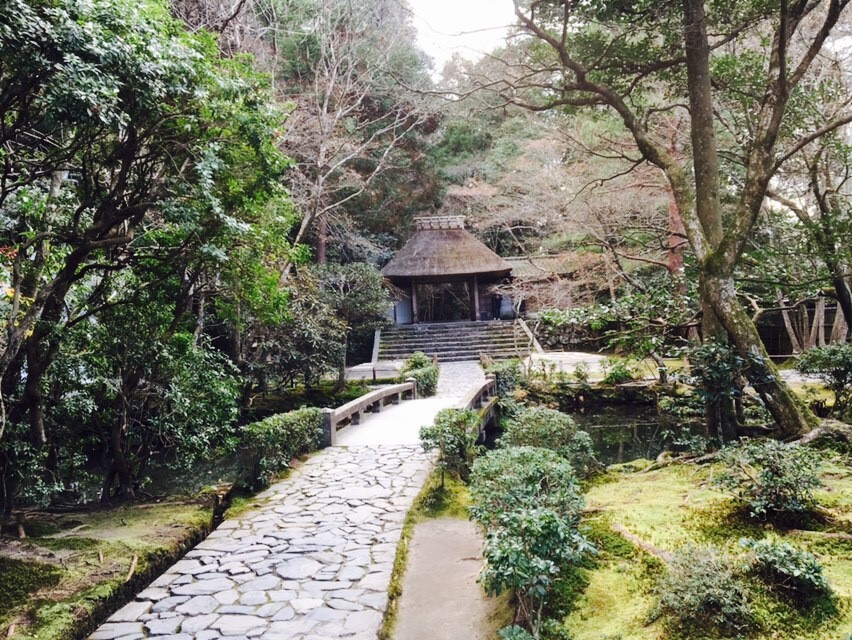 Kyoto’s heritage as the cultural capital for temples, shrines and the art that grows out of that is unsurpassed by any other Japanese city. A great way to enjoy a few of the cities many temples and shrines (there are literally thousands) is to follow the thought-provoking “Philosopher’s Path”(哲学の道). The name comes from the 20th-century Japanese philosopher Nishida Kitaro, who is said to have done daily walking during his meditations. It is popular all-year-round, but during Hanami (that’s the blooming of the cherry blossoms) it reaches its peak in popularity. It’s not hard to understand why. The canal lining Philosopher’s Path, blooming with cherry trees, is exceptionally beautiful, and makes one of the best Kyoto inner city places to see cherry blossom trees. 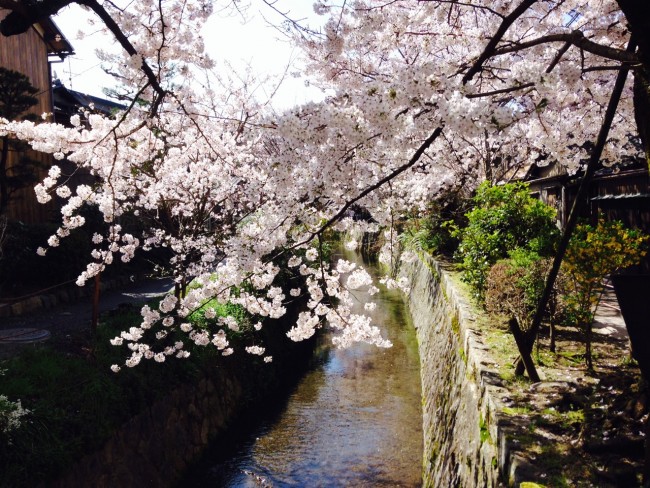 Walking the Philosophers Path in Kyoto

Walking the full length of the Philosopher’s Path, the stroll extends from the Ginkaku-ji temple to Nanzen-ji temple. Visitors can start from either end, but I like to start from Ginkaku-ji. Ginkaku-ji can be reached by taking a number 5, 17 or 100 bus from Kyoto station. It takes about 40 minutes and costs 230 yen. The buses in Kyoto are really slow for some reason… Alternatively, you can catch the Keihan line up to Demachiyanagi (especially good if you’re coming to Kyoto from Osaka), and walk from there. It’s about two-and-a-half kilometers walking, but there is a nice park which is fun for walking if it’s autumn. I only mention it as if you’re like me and get a bit car sick, a 40 minute bus ride crammed full of other tourists, starting, stopping, starting, stopping… is not very appealing. 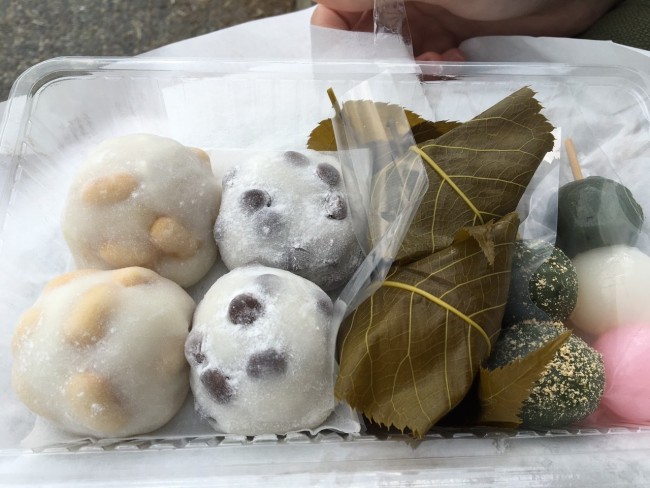 Buying Sweets Along the Philosophers Path

Another reason for walking there via Demachiyanagi is because it’s here that the absolutely delicious Futaba shop is located. If you are a fan of daifuku you will absolutely love Futabe’s offerings. If you haven’t had it before, there is no better place to try it in all of Japan. The downside is on weekends you should expect to queue for up to an hour. 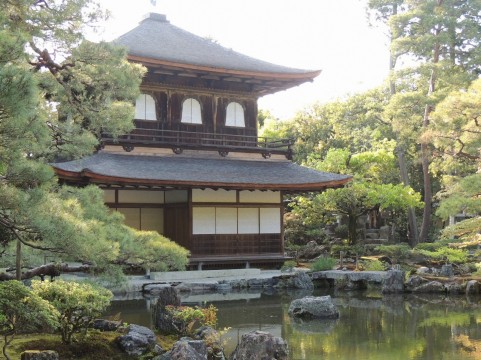 What to See While Walking the Path

At the start of the Philosophers Path lies the Ginkaku-ji (銀閣寺) temple. The official name of this temple is actually Jishō-ji (慈照寺), but it has since earned the nick name Ginkaku-ji because it was modeled on the tradition of Kinkaku-ji, the Temple of the Golden Pavilion. Ginkaku-ji was built in 1460 by the then-shogun Ashikaga Yoshimasa. Due to a war during construction, it was never completed and didn’t receive its planned silver foil covering. With this reason it has never actually been silver.

After Ashikaga’s death the silver was left off as a form of wabi-sabi art, which is the Japanese admiration of natural beauty and beauty from unintentional things. Many locals, myself included, will tell you they prefer Ginkaku-ji over Kinkaku-ji for precisely this reason and the influence it has over the temple. Great effort is kept into keeping Ginkaku-ji’s personality intact, whilst Kinkaku-ji is routinely polished up and never really allowed to show any.

Besides the temple, the grounds also hold a mossy wooded area, a Japanese garden and a sand garden which is rather unique. The mound of sand there is supposed to represent Mount Fuji. 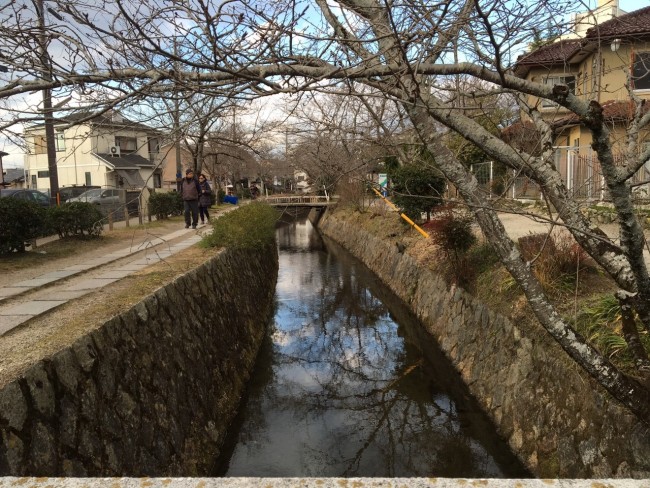 The canal at Philosopher’s Path is lined with sakura trees, so if you come out of season it’s certainly less crowded but not quite as breathtaking. 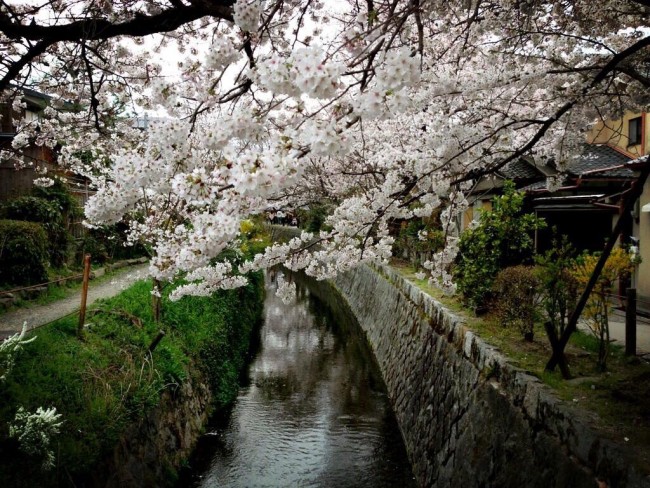 Here is the Philosopher’s  Path in season. It’s much more of a sight, isn’t it?

The canal was built in the Meiji era (1868-1912) to increase local economic prospects. It runs all the way to Lake Biwa in Shiga prefecture. It was used to carry goods between the two cities, and powered Japan’s first hydro-electric power plant! Cool stuff. 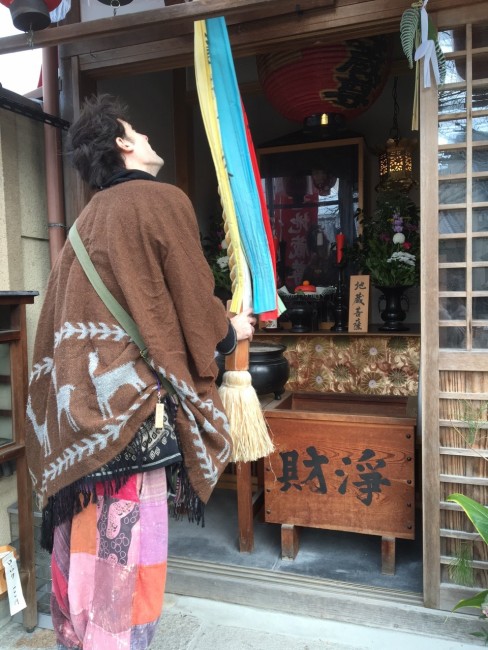 Take a Break from the Walk and Wander into a Shop

Along the Philosopher’s Path you can find various restaurant and craft stores. It’s a good way to mix in some souvenir shopping without having to go to a shopping district. One of my favorite shops is about half way down. Here you can buy Japanese art prints for pretty fair prices. There is also a pottery shop where you can make your own cha-wan (tea cup). After the shop has fired it, they will send it by international post to your house back in your home country! Besides shops there are a few Shinto Shrines. Make an offering here of 5 or 50 yen, ring the bell, clap twice and make your prayer. To be honest I’m not sure which god this Shrine belongs too… so let’s just pray for good things for all. 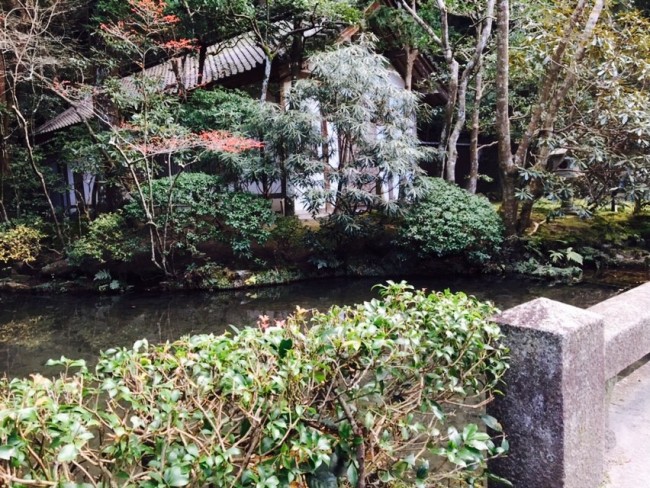 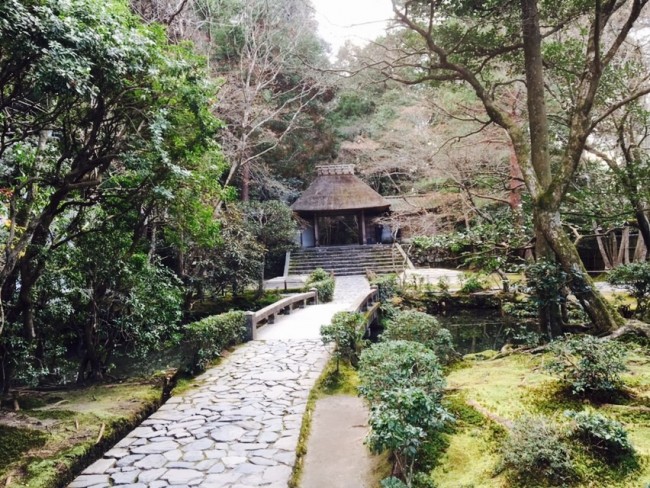 Honen temple is a small temple built in 1680, located a short walk off the path. This small temple is exceptionally beautiful with its little lake and moss-covered gardens. The entrance is very attractive and is most stunning in autumn. Entry to the garden is free, and the inner can only be entered in the first week of April and November, where art is exhibited. In more recent years music recitals are often also held inside the temple.

When the stone paved path next to the canal comes to an end, the Philosopher’s Path isn’t exactly finished. Keep walking a bit further on until we reach Nanzen-ji(南禅寺). 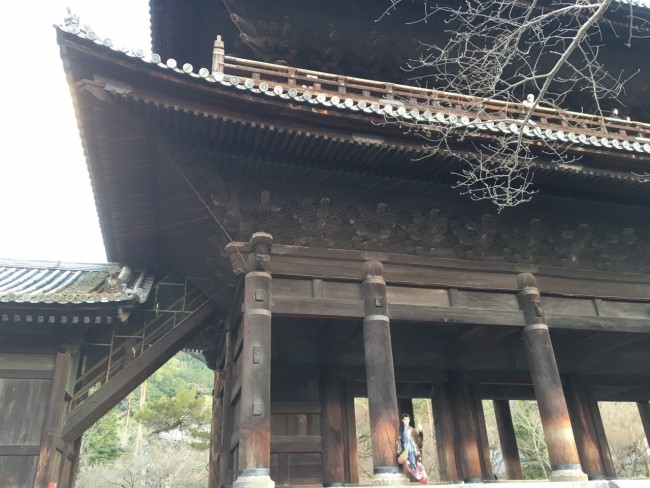 At the entrance to this Rikai sect Zen temple lies the large gate known as Sanmon. This gate, built in 1628, was famously proclaimed beautiful by the Robin Hood-like Ishikawa Goemon. Goemon stole from the rich and gave to the poor, practiced ninja arts and died after a failed assassination attempt. It was in front of Sanmon where he was boiled alive with his child as punishment for his crimes. Nasty stuff…

To the rear of Sanmon lies houjou (abbot’s quarters). Entry grants you access to a rock garden and national treasure level screen door paintings. The paintings are on gold-covered screens and feature tigers. 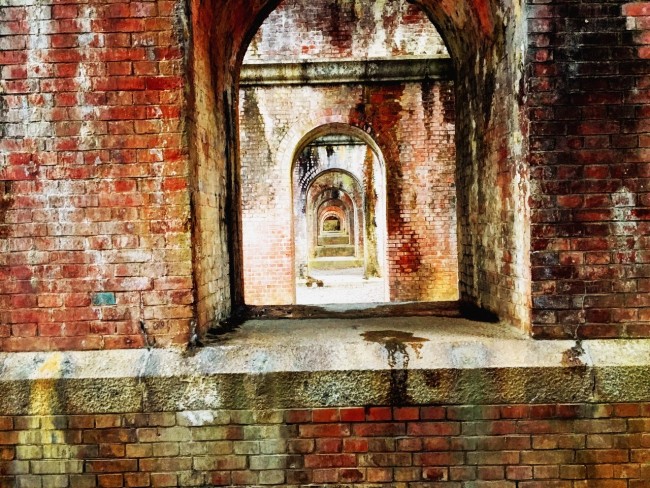 To the right of houjou is a rather out-of-place looking brick structure. Built in the Meiji era, it’s actually an aqueduct and forms part of the canal that runs to Biwa-ko that we were previously strolling along. You can climb up and follow it around for a little while through the forest. 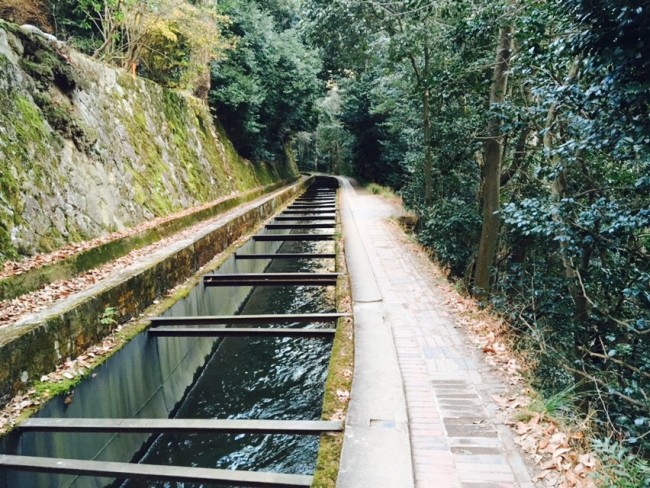 Nanzen-ji also hosts a garden called Nanzenin, which is located behind the aqueduct. It is here that the Nanzen-ji’s founder emperor Kameyama’s mausoleum is found. It is said to be most beautiful during autumn, but I must confess I’ve not yet seen it during an autumn… I hope to see you there this November!
I hope you will enjoy the Philosophers path this April and November, or any time you like. If you are looking for a good day itinerary in Kyoto, the Philosopher’s Path fits the bill. See you there this autumn! (And of course every spring too).