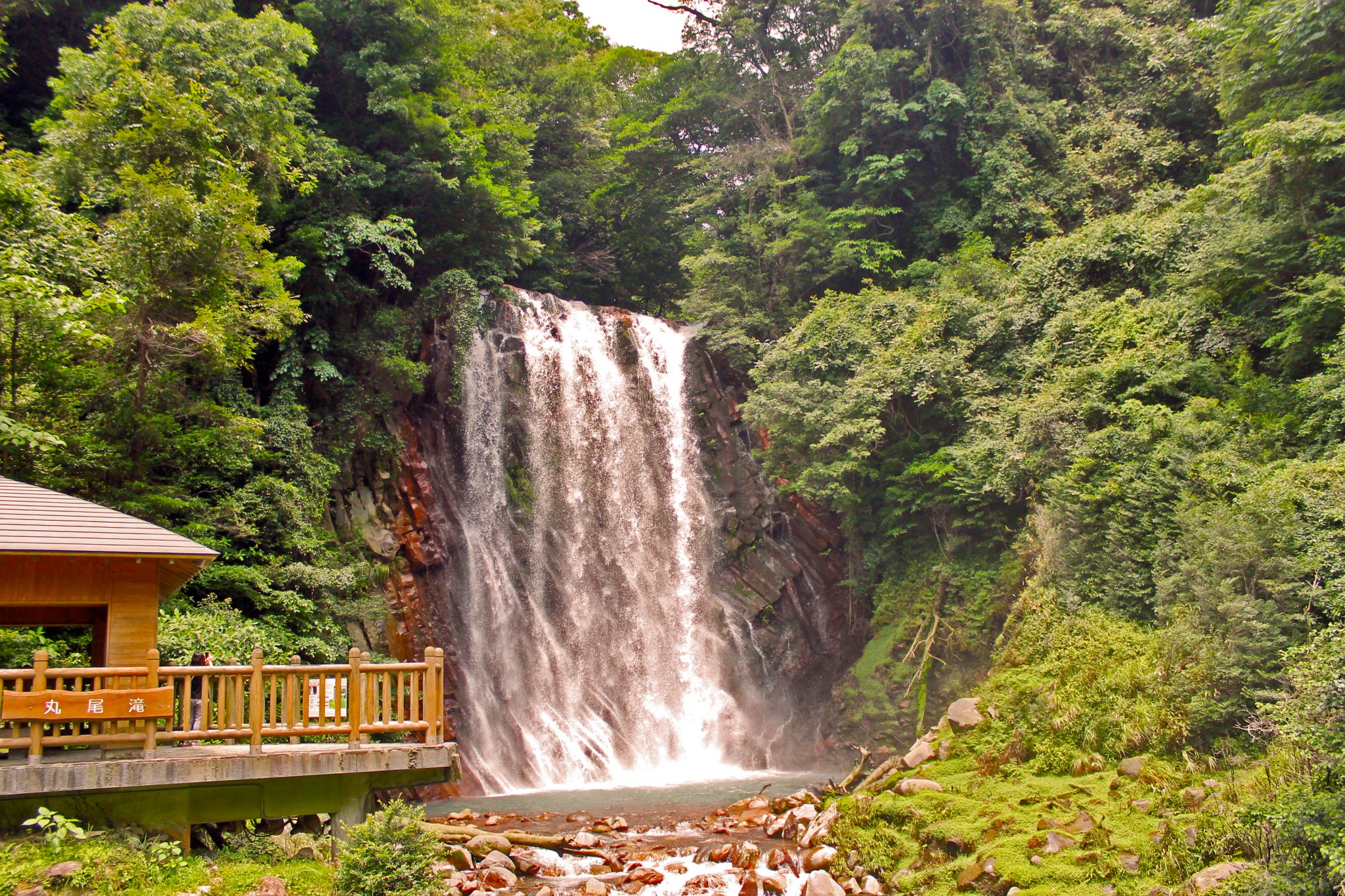 Fall in love with the nature and waterfalls around Kagoshima

The Many Waterfalls of Kagoshima

Kagoshima Prefecture is overflowing with numerous dazzling waterfalls which enrich its flourishing and tender mountainous landscape. Some recommended waterfalls are: Inukainotaki, Chigonotaki, Maruonotaki and Ryumondaki waterfall. But they are way more scattered around and are waiting patiently to be explored and admired. For those who are enthusiasts of nature that is wild and uncontaminated by humans, the waterfalls give great opportunities to make nature-based excursions. 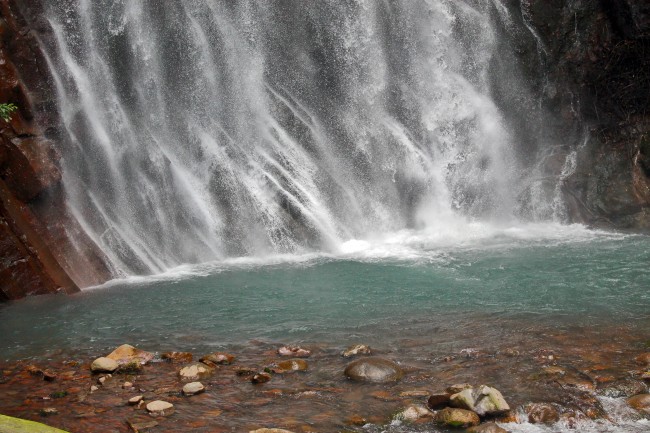 Upon my frequent trips to Kagoshima Prefecture, I learned that the main and leading attribute of this vast and warm place is its natural and unspoiled habitat. That also easily corresponds with the people’s lifestyle which in some way is strongly connected with nature and the laws that governs the natural environment. Perhaps that is one of the main reasons why I sometimes escape from a buzzing and chaotic Tokyo. It is easy to find a peaceful and relaxing corner there where you can just unwind and forget about all of the stress. 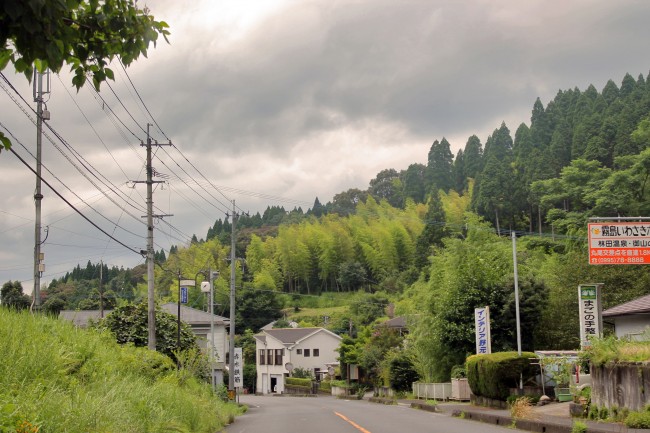 Onsen and Waterfalls Abound in Kagoshima

The very first waterfall I encountered in Kagoshima Prefecture was actually a pure coincidence. We were driving to Midorisou, which is a beautiful natural hot spring (onsen) located by the small lake. As we took a wrong turn, we found Chigonotaki waterfall. Although the waterfall was not so much impressive, the surroundings made the overall scenery feel like a surrealistic painting. It was simply beautiful and breathtaking. 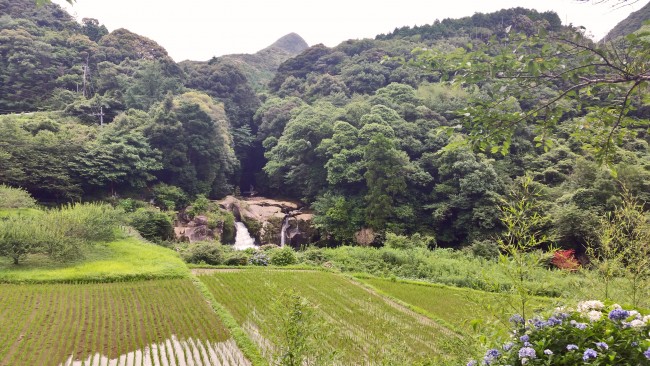 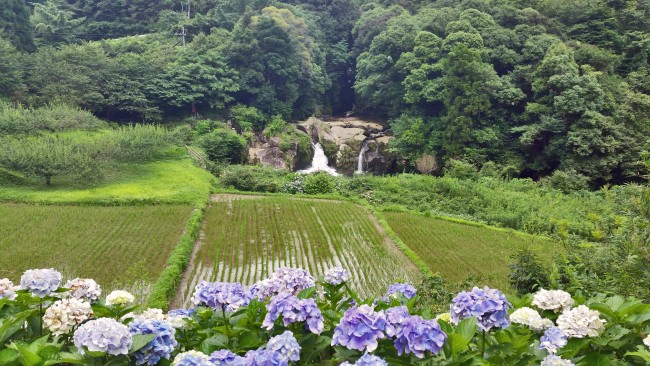 The Sad History Behind the Landscape

We learned from a local man who was taking professional pictures that the history of this place is quite bitter and sorrowful. A long time ago, in the distant past, there was a small wooden temple where a young boy lived with a monk. One day, he was wrongly accused of stealing some eggs by one of the villagers. Unable to prove his innocence, he jumped off the waterfall and killed himself. Since then, people started naming this waterfall Chigonotaki which can be translated “a waterfall of a child”. 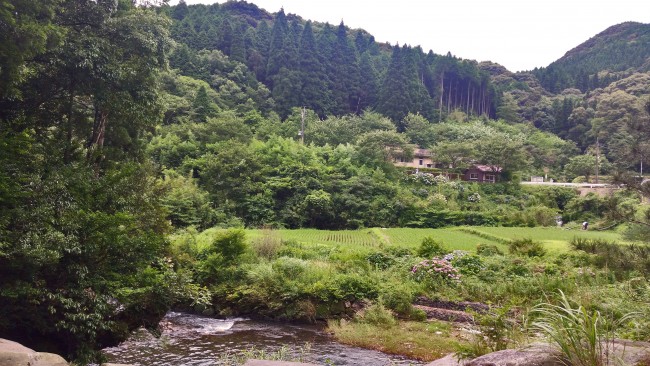 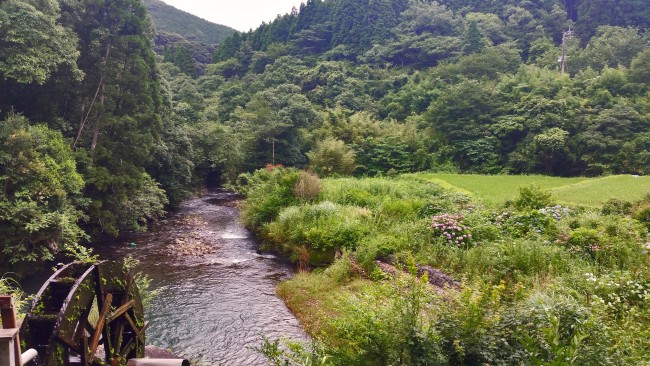 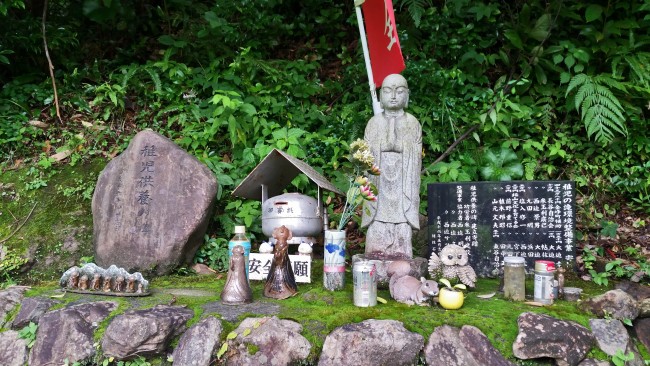 Up to this day, there is a tiny shrine-like place close to the waterfall where people bring small gifts to make sure the soul of the boy rests in a peace. After leaving this area I felt like seeing and understanding more about Kagoshima.  S. remembered a few great spots from his childhood days so we happily set up for a short trip to see more waterfalls. 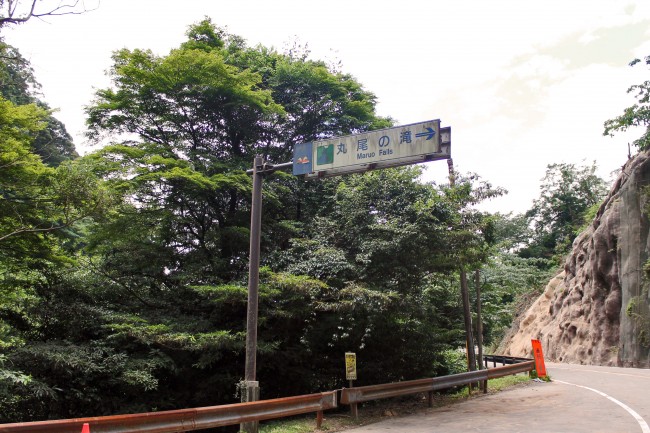 The next one we saw was Maruonotaki waterfall, also called Yunotaki by Japanese people. “Yu” means hot and “taki” stands for waterfall so it can be easily said that it is a hot waterfall. Surprisingly, this waterfall is really hot and the area around it is full of naturally heated outdoor hot springs which is well worth exploring.

The waterfall itself is quite dramatic and gives you spectacular views of a 23 meters high rocky wall violently shaped by hot waters. You can also observe it during a night to get a different impression of its character as the area is  beautifully lit up. When winter comes, the waterfall’s image changes again due to a high pressure of steam evaporating from the warm waters. 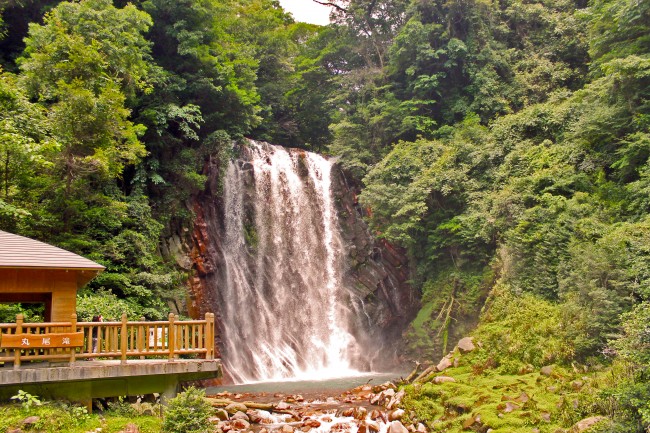 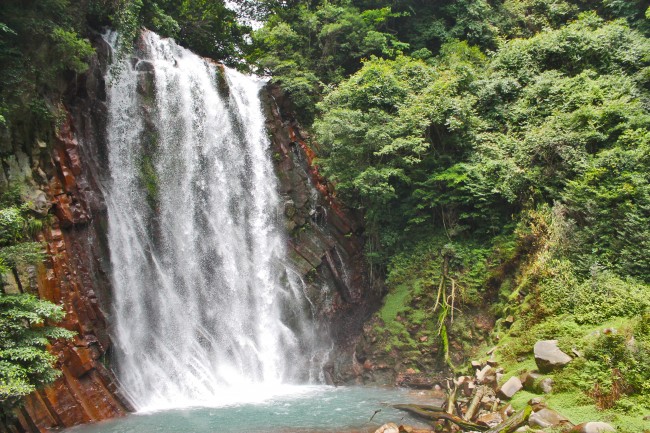 Another short stop brought us to Ryumondaki waterfall, the biggest one we saw that day. Spanning its wings around 43 meters wide and 46 meters high, it had a remarkable influence on us. We found out from some Japanese tourists that it has an engaging history. In the old times, people who lived in a tiny village nearby, believed that the falling waters resembled a dragon and its cave behind the fall. Hence the name Ryumondaki: “Ryu” equals dragon, “mon” stands for an entrance and “daki” means waterfall. 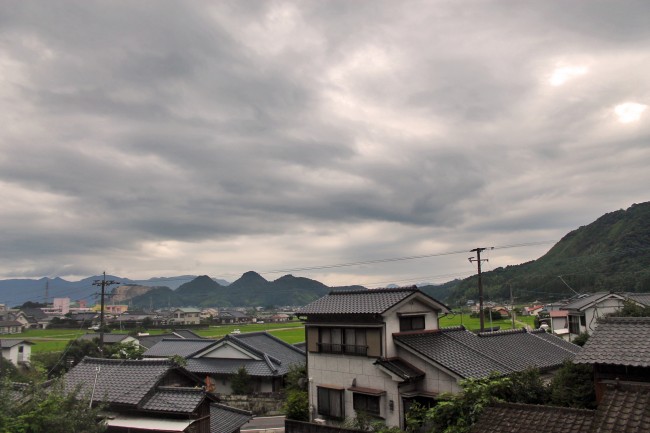 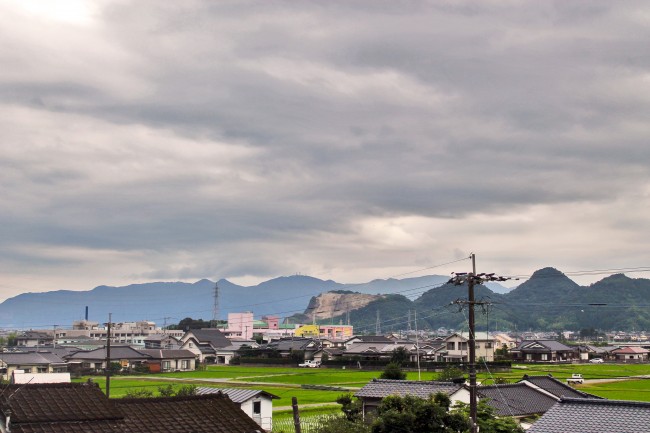 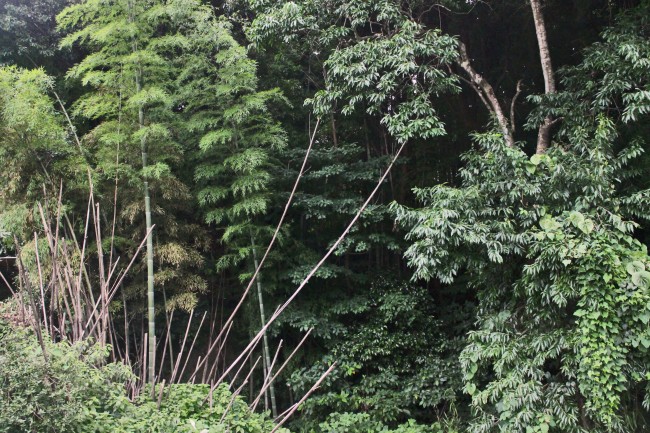 The whole panorama was striking and bewildering. The power of the water was overwhelming and even though we stood quite far away we still got quite soaked. A small old shrine, located on the side was an additional feature of this place. Even though it was loud because of the powerful sound of falling water, we felt that the atmosphere was very peaceful and somehow spiritual. 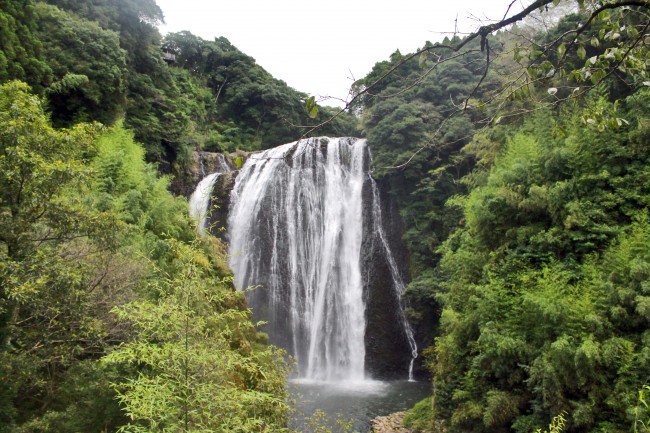 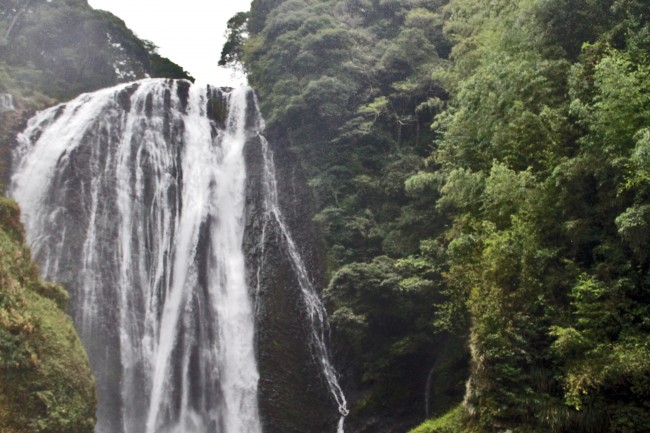 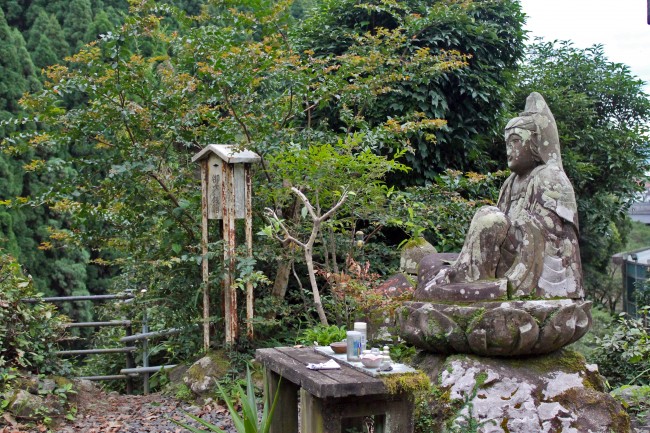 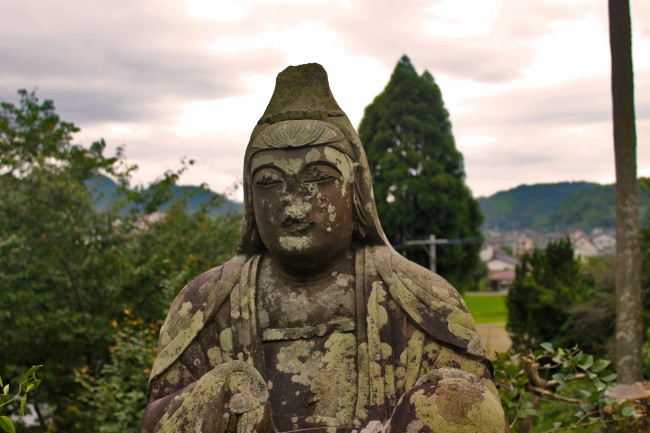 On our way back to Midorisou, we took a break in a hidden foot hot spring (onsen) where we talked with the owner about other waterfall places to visit. We made a list of waterfall and natural spots to hunt down. There is still a great number of unknown places to visit and see in Kagoshima Prefecture. 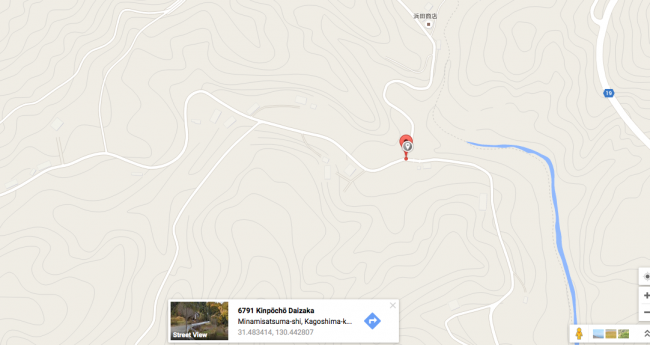 Ghibli Theme Park: What We Know So Far