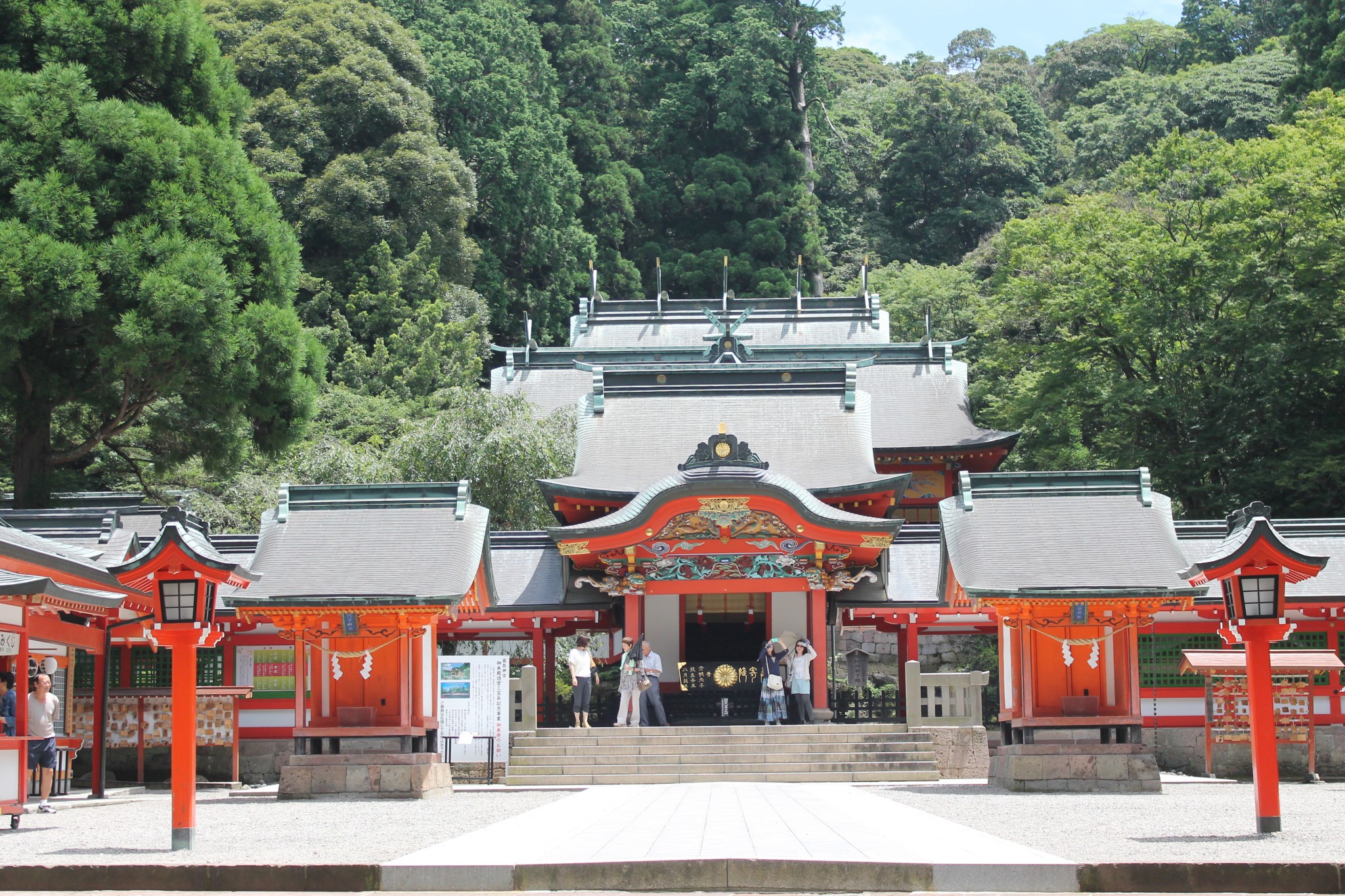 Kirishima Jingu Shrine and its Mythology

I was told that the best green tea ice-cream in Japan are those being sold in a souvenir shop located on the side of Kirishima Jingu Shrine in Kagoshima Prefecture. As I love matcha ice-cream and the day was pouring hot, the weather was perfect to eat something cold and refreshing, I decided to check it out. If you live or travel in Japan long enough you learn that if something is recommended by word of mouth, most of the time, it is exceptional. And, I have forgotten to mention, it is worth driving over two hours to test it. 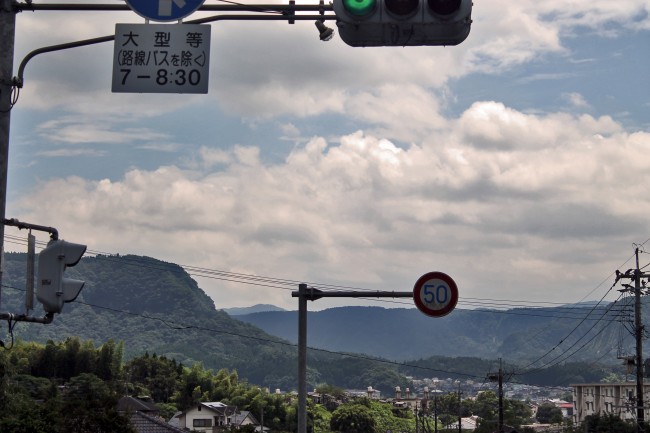 We got in the car early in the morning and full of hope to taste the most amazing matcha ice-cream, we set up for a journey towards Kirishima. We would have never thought that a simple urge to eat something cool and energizing would prompt one of the most surprising discoveries during our travels around Kagoshima prefecture. 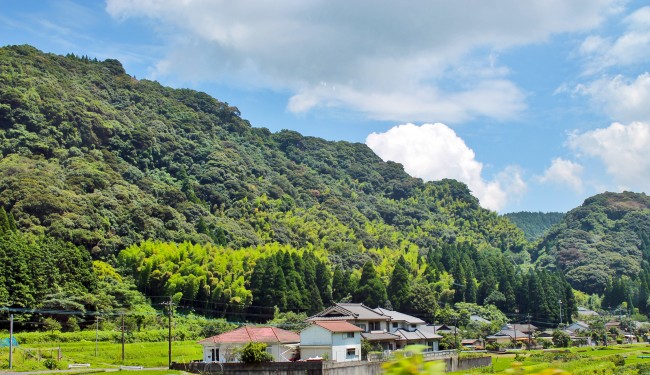 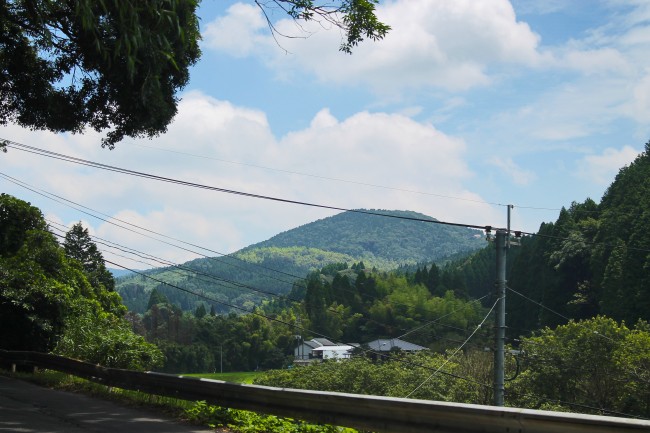 Kirishima, an active volcanic mountainous terrain, is undoubtedly an alluring and captivating place located between Miyazaki and Kagoshima Prefecture. Its stunning mountains attract those who are keen on hiking and exploring the natural habitat: highlands, volcanic lakes and hot springs. But not only does that appeal to many people who want to visit this place. There is another significant factor: a legend which plays an important role in Japanese mythology. And, markedly, it is associated with Kirishima Jingu Shrine. 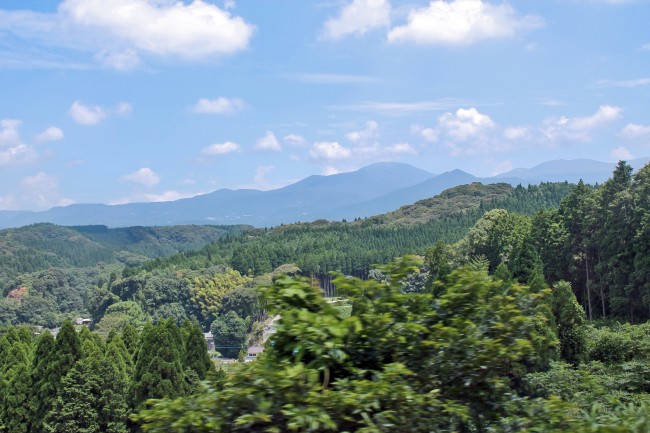 Kirishima in the front of us 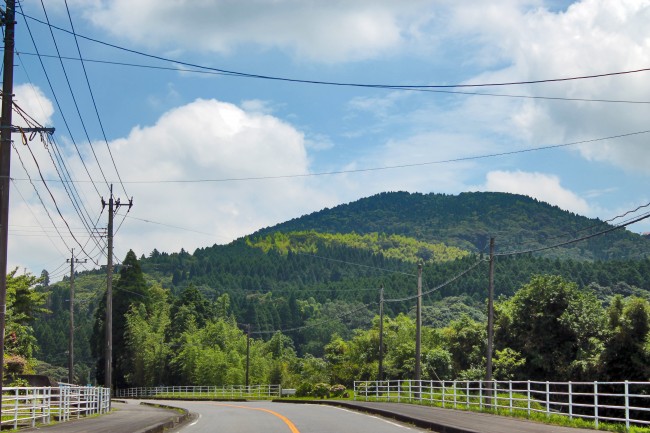 As we approached Kirishima town, I could see from afar, a colossal yet elegant red torii, which was accompanied by ancient cedar trees, majestically protecting a spiritual atmosphere floating in the air. Behind it, a massive stone staircase lead people straight up to the shrine. We were startled and instantly wanted to see more. We completely forgot about the ice-cream! 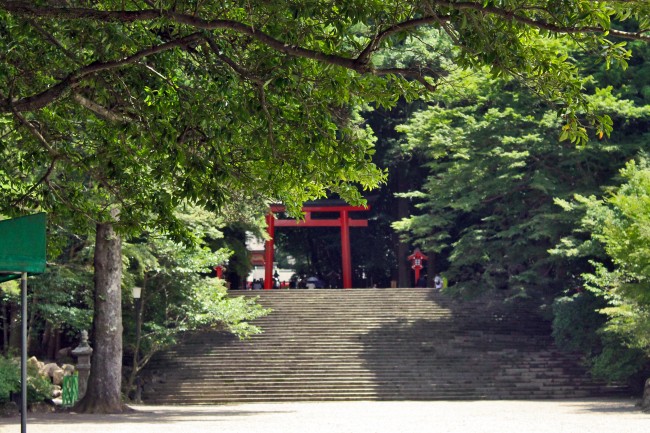 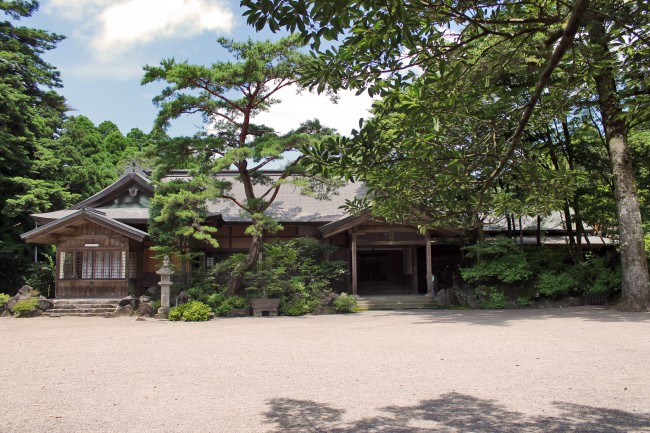 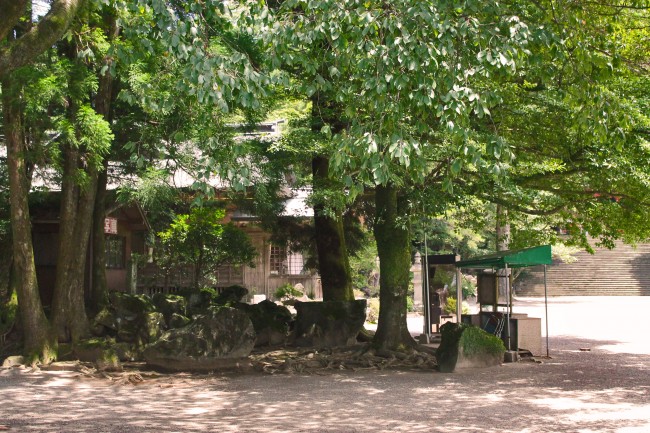 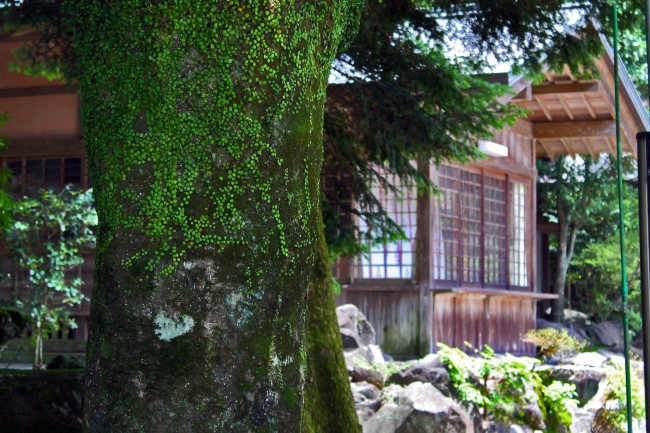 Kirishima Jingu Shrine, also called Takachiko No Mine, is a shrine dedicated to Konohanasakaya Hime, a princes heaving a strong presence in Japanese legend. She is a symbol of blooming cherry blossoms, and a woman commonly associated with a delicate earthly life and a goddess of volcanoes. It is believed that God Ninigi No Mikoto, a grandson of the Amaretsu Goddess, after descending the earth close to the mount Takachiko No Mine, married her and became mortal. He brought to the earth, three imperial regalia such as a sword, mirror and gem and in this way he established the lineage of Japanese emperors. 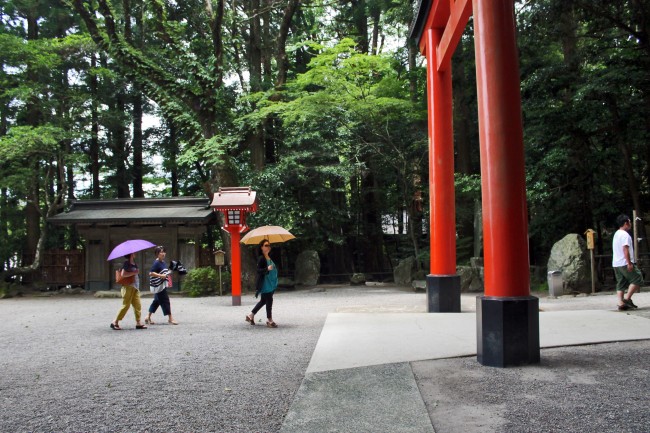 What is quite intriguing about the shrine is the fact that it was built in a different place than it stands today. Because of frequent volcanic eruptions it was destroyed several times and rebuilt as many times as it was necessary. The current shrine was build in 1715 and it has survived to this day, being a vital symbol in Japanese mythology. 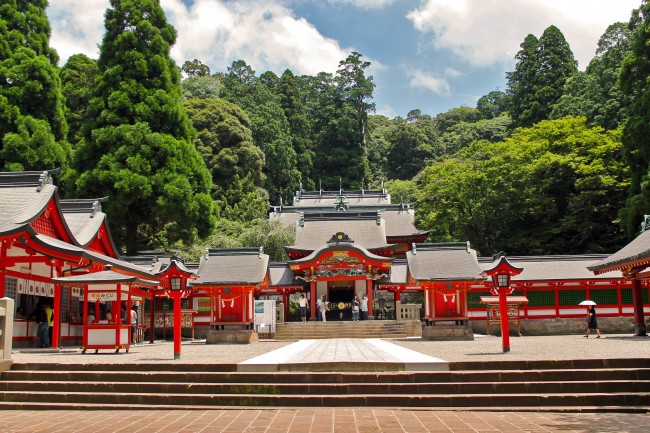 As we climbed the large stone stairs, we could finally see the red wooden structure growing in front of our eyes. I could only think about one word to describe it: magnificent. Being elevated on the green close-knit mountainous background gave it a dignified appearance and the ambience of a supernatural elegance. The whole shrine feels like a place where Gods and other spirits exist. 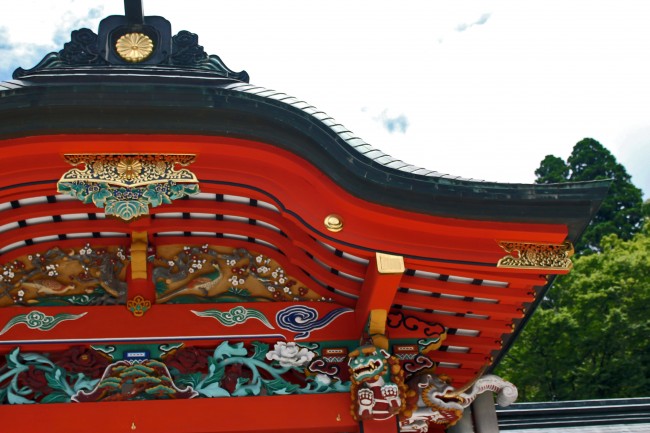 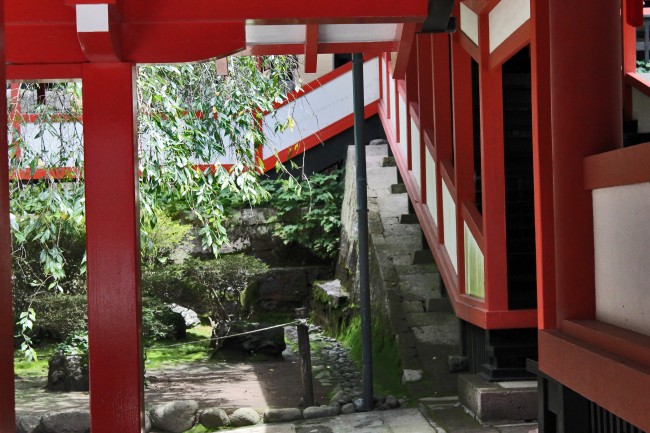 Nature and the shrine

On the right side, a huge ancient tree over thousands of years old and alive to remember the times where Gods were living on the earth, spans its branches over the shrine and protects it from natural disasters and evil spirits. If you touch it, you are more likely to receive good fortune in your life. 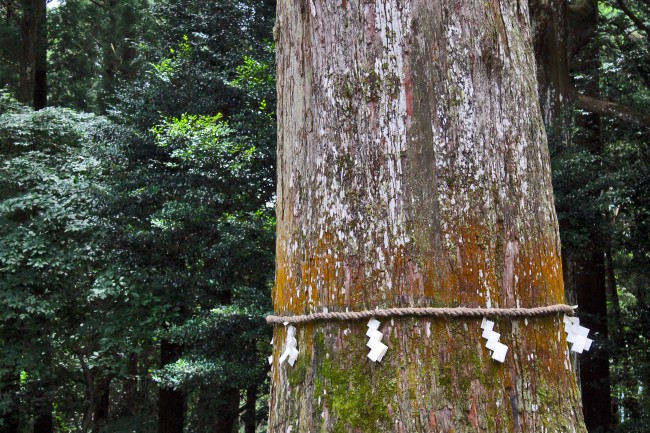 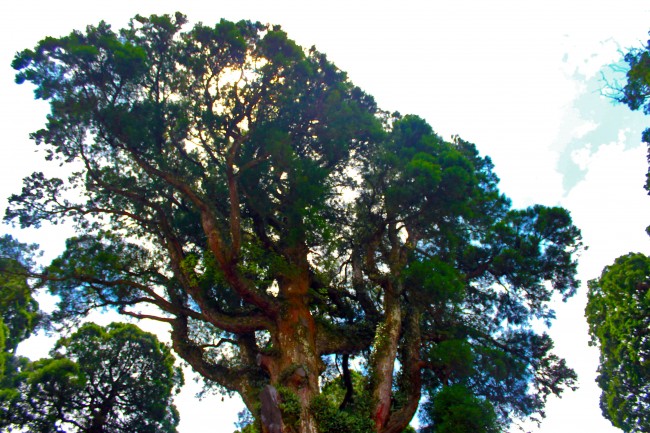 A holy tree – protecting the shrine

It is also believed that if you wash your hands in the holy water from the well situated right on the other side of the shrine and then give a proper bow and honest wishes in the front of the altar your relationship or marriage will be blessed by happiness and joy. To make your wishes granted and shielded you can also purchase additional talisman or a charm from a nearby shop. 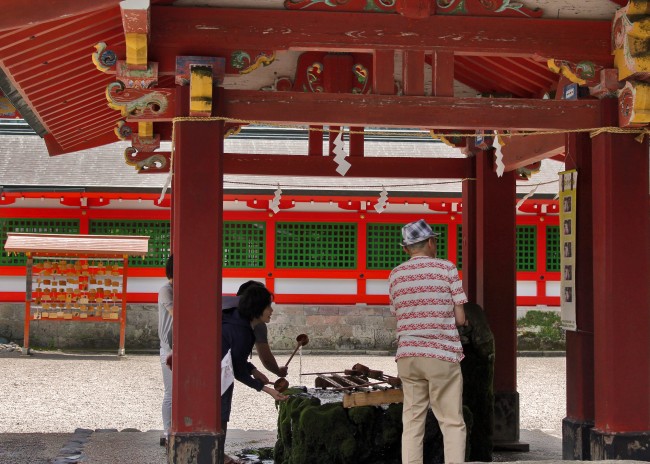 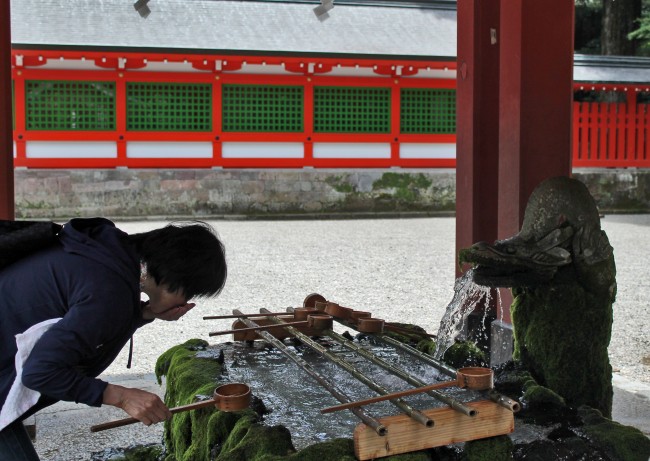 People washing their hand and face with a holy water 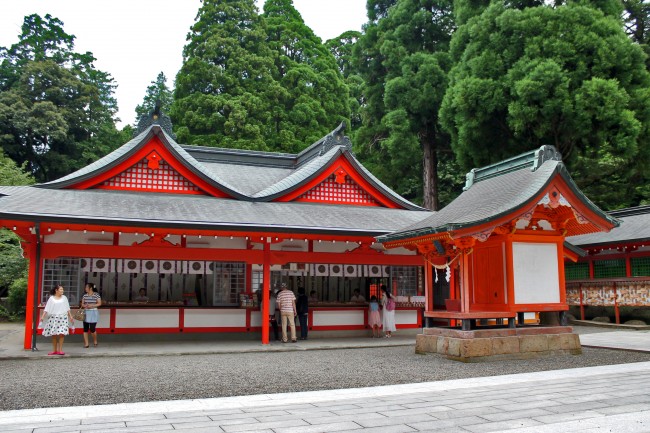 We managed to do all the necessary rituals to bring a solid doze of prosperity in our life. However, that wasn’t the most important thing. What we were truly delighted about was the place itself and its magical atmosphere.

So what about the ice-cream then? We finally managed to find the shop where we could get the so called best matcha ice-cream in Japan. Surprisingly, there was no long queue and the shop cafeteria seemed to be quite empty. The sale lady was quite shocked and puzzled by the fact that a foreigner just entered her shop. She was quite nervous yet very friendly whilst selling ice-cream to me.

After having my first try I was in heaven. After tasting it again, I was in paradise. Creamy, subtle, cold, with a hint of matcha flavour – definitely the best green tea ice-cream in Japan.

Kirishima Jingu Shrine can be reached by a train from Kagoshima airport. However, Kirishima Jingu JR station is located more than 5 km away. Local buses are provided. It takes only 10 minutes to get to the shrine and it costs 250 yen. Please note that one bus operates between 1-2 hours.

Sebastian Masuda and Harajuku’s Kawaii and Japanese Punk: Notes on an Urban Rebellion