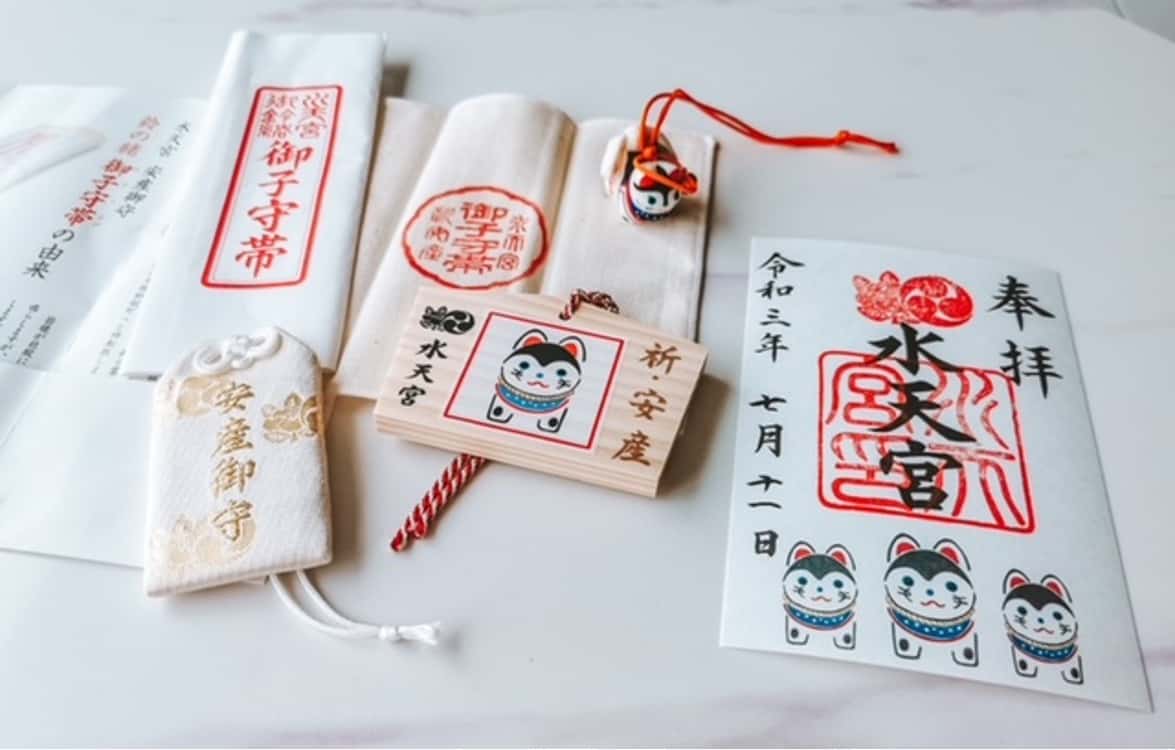 Anzan Omamori: Japanese Amulets for Safe Childbirth and their Traditions in Japan

In shrines and temples of Japan, you’ll find omamori, or amulets, of all kinds. While some places of worship may have their specialty, like this shrine that is dedicated to “Peach Boy” Momotaro, most places will carry good luck charms for health, wealth, love, safety, and education. Surprisingly though, the traditions around pregnancy and birth are still so prevalent that over 90% of pregnant women carry an anzan omamori, which is an amulet for safe childbirth. There is even a scene in the movie Koizora (恋空, Sky of Love) where the character played by Haruma Miura went to lengths to obtain an anzan omamori. This is why when I found out I was pregnant, I made a point to look for an anzan omamori at every shrine I went to. I ended up collecting half a dozen of them and stumbled onto the most prominent shrine in Tokyo for safe childbirth. After all, I was having my first child, and I wanted to do everything I could to feel less anxious and more prepared.

What is an Omamori and How Do You Use Them?

Literally translated, omamori (御守 or お守り) is something that protects. These are amulets sold at Buddhist temples or Shinto shrines at about ¥300 to ¥1,000 per amulet. After entering a temple or shrine, you’ll generally see the main building first where people give a prayer. Right next to it on either side will be the temple or shrine office called the Shamusho (社務所). This is where you will find display samples of all the different types of omamori you can purchase. Below are the common types of omamori which you can find easily:

There are no strict rules on how many you can buy or keep on you. Though generally, people put the amulet in a location that is related to its purpose. For example, a Gakugyo-joju omamori for the sake of success in studies might be tied to a school bag or kept in the pencil case, whereas a Kotsu-anzen omamori for traffic safety could be hung on the rearview mirror in a car. It is also possible to buy an omamori for someone else so that you may bring it back as gifts for friends and family.

When it comes to pregnancy and childbirth-related omamori, it’s more of a specialty, and you may not find it at every shrine you set foot into. In addition, there are specific rituals and items involved in traditions related to pregnancy, so not every shrine and temple are prepared to offer these services. But first, let’s take a look at the traditions of ensuring a healthy pregnancy and safe delivery of a child in Japan.

The History and Traditions of Obiiwai, The Safe Birth Ceremony

The custom of obiiwai (帯祝い) ceremony is believed to have existed during the Heian period (794-1185). The ancient Kojiki Records of Ancient Matters recounts the story of Empress Jingu, who wrapped a belly band around her body when she went to conquer the Three Hans, hoping that she would not give birth along the way. This tradition was originally performed by the imperial and warrior families and only became popular among the general public in the Edo period.

Since the Edo Period, the obiiwai ceremony has been carried out for women who are five months pregnant. Prayers are said for safe childbirth, and a belly wrap or maternity belt, usually a long white cloth, is wrapped around the mother-to-be’s belly as the pregnancy enters a more stable stage. Medically speaking, belly wraps provide support for the mother and child. But, more importantly, the psychological effects remind the pregnant mother to be more aware and move carefully, thus having a safe pregnancy. This tradition is still performed by over 60% of pregnant women by visiting a shrine or temple on inu no hi (戌の日), the Day of the Dog.

What is Inu no Hi and What Do Dogs Have to Do with Pregnancy?

Having smooth and uncomplicated births and large litters is why dogs are the symbol of safe childbirth and fertility. Amongst all of them, the most famous one is perhaps Inu Hariko (犬張子). You will see this adorable dog character on pregnancy-related amulets, ema (絵馬), which are wooden plaques for writing wishes, greeting cards, and all sorts of maternity products. As the word for dog in Japanese, inu (犬), shares the pronunciation of a specific date on the traditional Japanese calendar inu (戌) (which occurs every 12 days), inu no hi (戌の日) is an auspicious day to conduct ceremonies and prayers related to pregnancies. You might find certain prominent shrines for childbirth particularly crowded on those days, such as Suitengu Shrine in Tokyo.

Suitengu: The Shrine for Fertility, Pregnancy, and Children’s health

Though the traditions around pregnancy are still widely practiced, not all shrine carries out these ceremonies. However, one that does is Suitengu (水天宮), one of the most renowned shrines in Tokyo. This shrine is often bustling on weekends, with couples praying to be blessed with kids, expecting mothers, and families bringing their month-old little one for Omiyamairi (お宮参り), the Shinto equivalent of a christening ceremony. Not only can you find Anzan Omamori at Suitengu, but there is also a maternity belt with the shrine’s blessing seal print on it available called a Misuzu obi  (御子守帯). In addition, if you are trying to conceive, you can find an even more rare item called a Kosazuke Omamori (子授け お守り), which is a “Child Giving” amulet.

Other Notable Shrines that Carry the Anzan Omamori

If you find yourself searching for an Anzan Omamori but don’t have time to go to Suitengu specifically, some other significant shrines and temples carry it as well. After discovering that I was pregnant, I first went to the major places of worship I knew in Tokyo: Sensoji Temple, Hie Shrine, and Meiji Jingu. I only realized afterward that there were places like Suitengu dedicated to pregnancy and childbirth. When I had a short trip to Kyoto, I stopped by Kinkakuji Temple and was able to find an Anzan Omamori as well. With a healthy amount of these amulets in my possession, perhaps a little too many, I sailed smoothly through my entire pregnancy, and I did, in fact, have an easy birth and a very healthy baby.

Besides buying multiple amulets, it is also possible for you to buy them on behalf of someone else as a gift. So if you have an expecting friend and would like to surprise them with something special, look for an Anzan Omamori.

Lastly, if your wish of safe childbirth has come true, it’s custom to return to the same temple or shrine you purchased your omamori to burn it in the otakiage (お焚き上げ) fire burn. For some, the omamori serves as a memento of the child’s birth — in which case, are kept as a precious keepsake.

How to Get to Suitengu

As expected with Japan, it takes great care to celebrate one of the most important things – life. From applying the maternity belt during the Obiiwai ceremony to carrying an Anzan Omamori, and finally the Miyamairi for the newborn, each step is an appreciation and care for the beginnings of life. As traditions are carries on, so does the love through generations.

I'm Taiwanese American and a "can't stay at home mom" that arrived in Tokyo in autumn of 2020 with an energetic toddler by my side exploring Japan. You can find me where the flowers and shrines are, often with a tripod and a notebook to collect whatever I may have found.