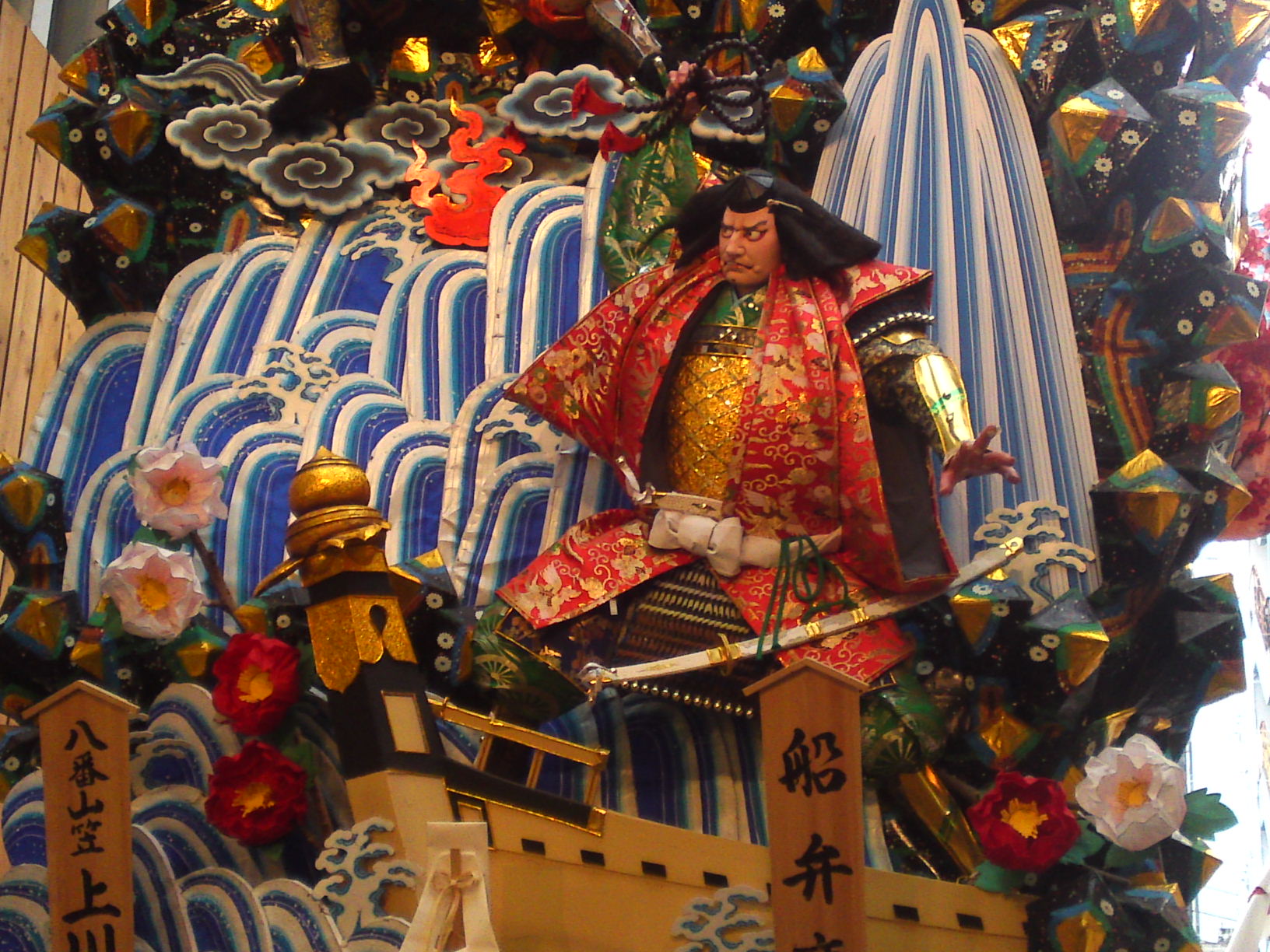 Hakata Gion Yamakasa (博多祇園山笠) is the name of one of the most famous Japanese festivals celebrated every year from the 1st to the 15th of July in Hakata Ku, Fukuoka City, Fukuoka prefecture in Northern Kyushu Island.
This grand event, more than 750 years old, attracts more than a million spectators every year and was designated an Important Intangible Folk Cultural Property in 1979.
Moreover, the sound of the Kaki Yamakasa has been selected by the Ministry of the Environment as one of the 100 Soundscapes of Japan. Its rites are centered on Kushida Shinto Shrine/Kushida Jinja. In fact the official name of the Festival is Kushida jinja Gion Retsu Oomatsuri.

Now, you need not worry if you cannot visit Fukuoka City during the first two weeks of July as the giant floats are on constant display for all to enjoy either under roof along the Nakagawa River at a walking distance from Hakata JR STation or inside Kushida Shinto Shrine!

Don’ forget you can see both sides of the float!

The Yamakasa floats come in two categories, namely, colorful floats for decorative purposes called kazariyama, and floats to be carried in the festival known as kakiyama. The decorated floats are set up on the street corners on July 1st for display, and you can take a look at them while strolling through the city. They are almost 10 meters tall,  and are decorated with samurai or popular anime character dolls produced through the expertise of master Hakata Doll craftsmen. Formerly, men used to run about carrying these tall decorated floats, but because they would get stuck on electric cables and lights, it was decided that they were more suited for display purposes only. The floats exhibited at the Kushida Shinto Shrine and along the Nakagawa Rivercan be viewed all year round.

The kazariyama floats are truly enormous and you had probably better take photographs at different levels for more precise viewing: bottom part.

One full space is dedicated to the history of the Festival and the tools needed to drive the floats.

These poles are placed under the kakiyama, “Yamakasa/Festival Floats” and over the shoulders of  carriers running at full speed in the streets of Hakata. Bear in mind that each float weighs at least a ton!

The back side, or “river side side” of the same float

The carried floats are borne by the men from the 10th and the festival culminates in excitement on the 15th. Early in the morning, at 4:59 on this final day of the festival, the first float sets off at the signal of beating drums. This is a contest in which men compete on the time taken to race along a 5 km course, over more or less 30 minutes; although speed is important, they are also required to maintain a graceful and heroic style as they run carrying the floats on their shoulders.

The interesting thing about this festival is that the citizens of Hakata refrain from eating cucumbers during the festival period. Even if they happen to find slices of cucumber in a bowl of salad, they will pick them out. This practice is said to derive from the fact that the pattern of the round cucumber slices resembles the emblem of the festive deity called Gion-sama enshrined in Kushida Shrine!