The Fukuoka underground, established in 1981, is one of Japan’s more simple underground systems with just three lines. This simplicity makes it one of the easiest underground systems to use. The first line to be built was the Kuko, or airport line which now connects directly to the domestic terminal of Fukuoka Airport. In 1982 the Hakozaki line was added, and more recently in 2005 the Nanakuma line was added. The underground provides access to main areas of Fukuoka city as well as directly connecting to Karatsu in Saga prefecture.

Given its direct connection to the airport, the underground is the fastest option for travel to and from the airport. The entrance to the underground is directly outside the domestic terminal, while the international terminal is connected by a short shuttle bus ride, free of charge. The station is the terminal station for the Kuko, or airport line. This line goes through to the opposite side of the city, Meinohama. Several of the trains also continue on from there to Karatsu city in Saga.

From the airport, Hakata station is only two stops, or around five minutes away. From there, the JR lines and Shinkansen(bullet train) are accessible. With elevators at each station the underground is easy to use even with luggage and ticket machines can be used in English. There is also a free over the phone interpretation service available in English, Korean and Chinese. Announcements can be heard about this at stations and it is available from the ticket counters.

Trains run from early morning to late night with the first train leaving Hakata station at 05:50, arriving at the airport at 05:55 so if you have a morning flight you can be there in time for check in. You can also check the times for first and last trains at the entrance to each station. Trains run until around midnight each day. Purchasing tickets works the same way as on JR lines, with maps above the ticket machines to show how much it costs to get to your destination. A day pass is also available at 620 yen. This gives you unlimited access to the underground for a day, but is restricted to the underground lines and so, cannot be used beyond Meinohama station where it becomes the main JR line. Pass cards can also be used, like Nimoca, along with other cards issued in other areas of Japan. If you arrive in Tokyo first and purchase a Suica card you can also use this on the Fukuoka underground. 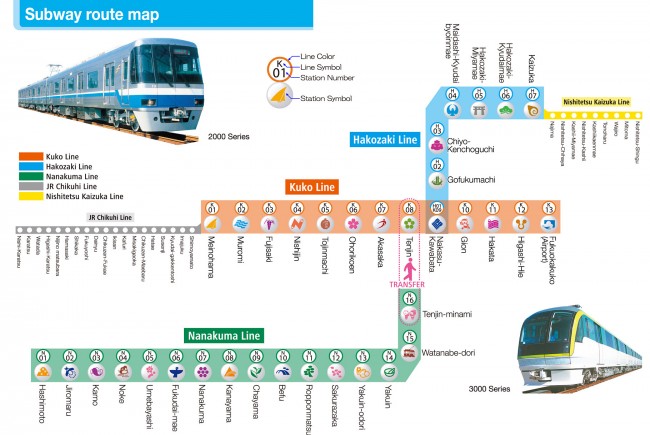 Transferring between lines is also easy as signs directing you where to go can be followed. While the Kuko and Nanakuma lines are not directly connected, Tenjin station and Tenjin-minami station which connect these lines are joined via the Tenjin Chikagai- the underground shopping centre. Easy to follow signs guide you to the station and a variety of shops are available to browse on the way. On the platform, information for the train approaching is shown in Japanese and English. On some of the newer trains the announcements for the next stations and train destinations are in English, Chinese and Korean as well as Japanese. All of this makes it accessible if you can’t speak Japanese. 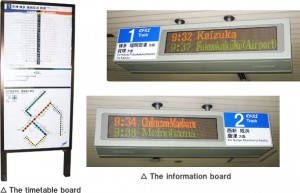 One of the advantages of the underground over bus travel in Fukuoka city is its speed. Due to heavy traffic, buses often arrive late but this obviously does not affect the underground where delays are rare. While rush hour can be crowded, there is nothing on the same scale as larger cities like Tokyo. If you are visiting and exploring on weekdays, the trains are usually quiet.

A unique point of the Fukuoka underground is the logo designs for each station. Each one features its own picture displayed by the station name, designed to illustrate an aspect of that area. For example, Meinohama is near a harbour so the picture is of a boat. Ohorikoen is a famous spot for cherry blossom viewing so it features a cherry blossom flower.

The Fukuoka underground easily offers the best way to travel around not only Fukuoka city but connects it to the rest of Japan. Buying tickets is simple even with little or no knowledge of Japanese and finding the right train or platform is simple. Some stations themselves connect to shopping centres or other stations directly. If you are planning to spend a day in Fukuoka city and would like to see what it has to offer, buying a day pass for the underground is likely the most convenient and fastest way. Many of Fukuoka city’s most popular destinations are close to underground stations, while others can be reached by bus stops close to these stations. The underground essentially connects all of the mainareas of Fukuoka city and is set to be developed in the near future.