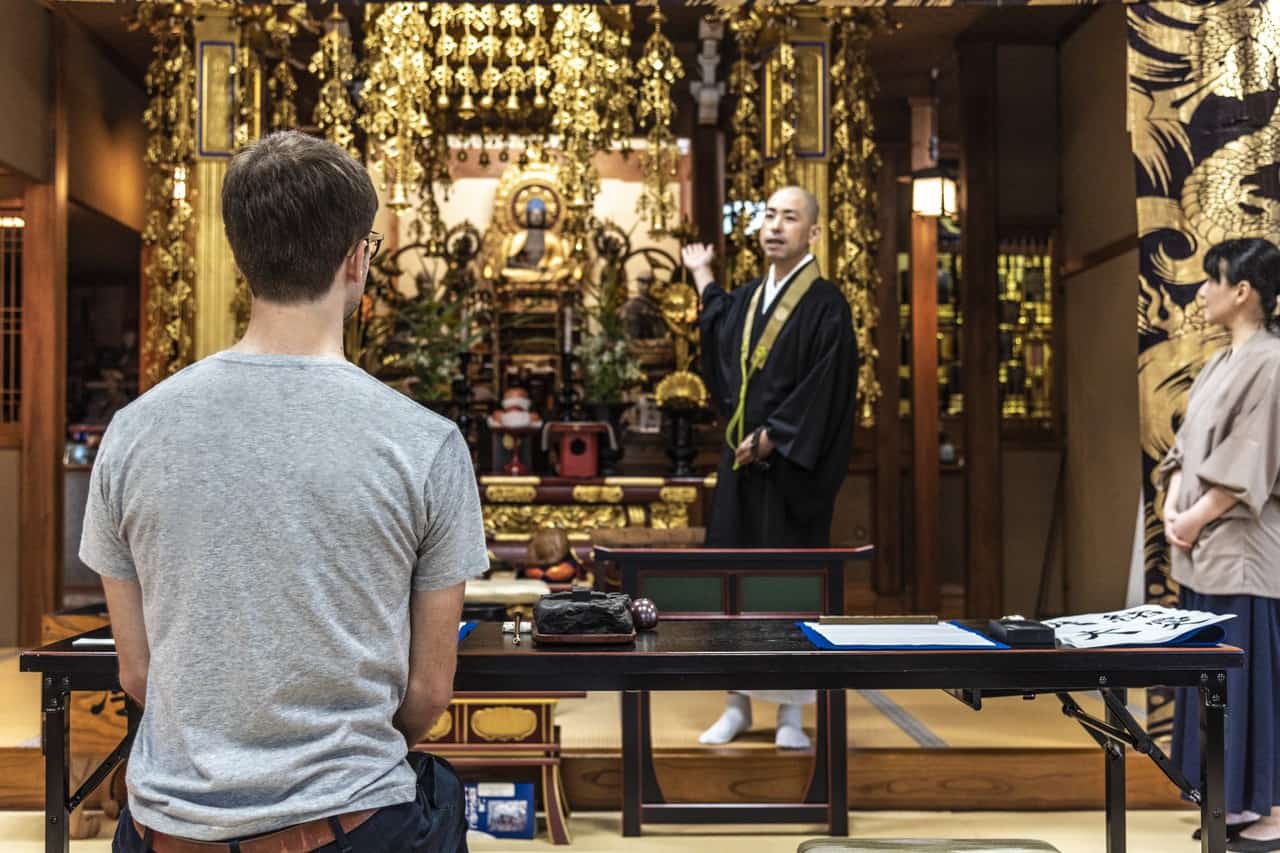 Experience Zen Meditation at a Temple in Nakatsugawa

Zen is probably one of the most illustrious Japanese philosophies. Synonymous with rest or well-being for many in everyday language, Zen originated from a Japanese branch of Mahāyāna Buddhism that focuses on meditation.

Japanese tea ceremonies are not strictly part of Zen meditation practice, which usually asks people to concentrate on one particular physical point. However, tea ceremonies gives a break from the pangs of the outside world by creating an aura of calm during tea preparation. This is a protocol to be respected. 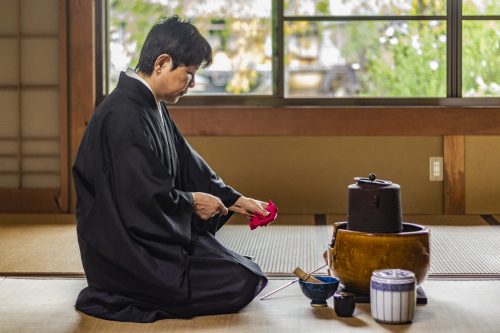 A host of Iouji Temple warmly welcomed me on a rainy day. The temple is designed by traditional Japanese architects, and reveals all its welcoming character even in the pouring rain. You can be enveloped by its many smells, such as soft straw tatami, and rest your eyes on the light passing through smooth shoji sliding panes, and brighten your heart thanks to a garden filled with water landscapes and small waterfalls. Now take a rest and satiate your tastebuds. 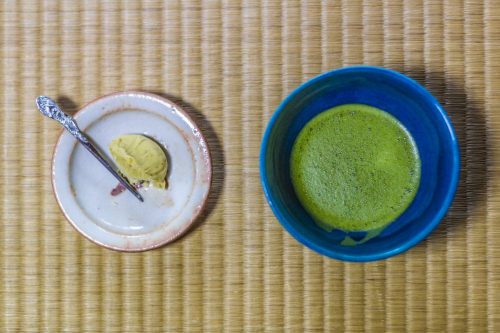 Matcha tea takes several minutes to be prepared according to a protocol to respect to fully appreciate guests. After having poured a few tea spoons of matcha powder into the bottom of a ceramic tea bowl, pour in some small ladles of hot water and then vigorously stir up and down with a chasen, a small bamboo whisk made specifically for this purpose. Bubbles size on surface of tea shows us the quality of the host’s preparation: the smaller they are, the smoother the texture will be. To counter the bitterness of the tea, it is usually served with a Japanese sweet, and the sugary wagashi goes perfectly with the tart matcha. The Japanese sweet served here is made of chestnuts, one of Gifu Prefecture’s local specialties. With a strong but delicate taste and a melting texture without being soft, it is one of the best matcha partners that I have come across so far. 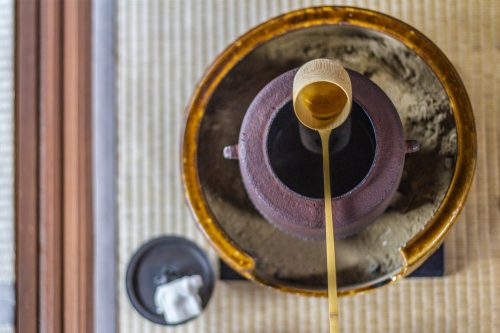 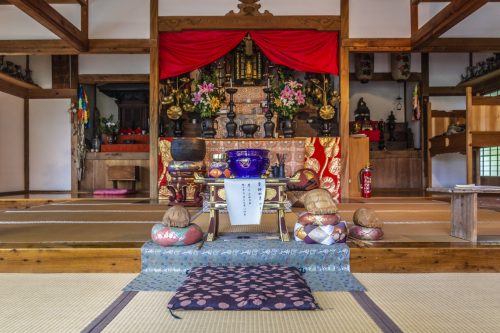 After the ceremony, finalized by one last powerful sip of matcha (protocol asks that you not leave a trace of matcha in the bowl) you can move into a prayer room to continue the moment. A monk in charge of the temple assisted me in burning an incense stick while reciting a short prayer if you wish. Prayer in this context is not necessarily related to a practice of religion or syncretism. This mindset is specific to the Japanese archipelago, where there is no harm in mixing practices or beliefs; all of the above is merely a physical and spiritual experience. 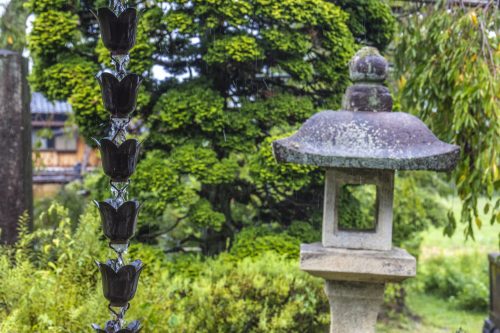 Once again, rainy weather during such an experience did not disturb me and provided a very different that was actually well-suited to meditation. Sounds of rainwater tinkling the traditional bells hung from rooftops gave me a precious auditory memory in Iou-ji Temple. 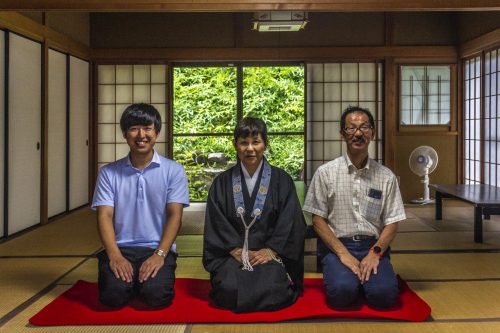 A tour guide of Nakatsugawa City offered me warmest and kindest welcome with a patience and passion to answer all of my specific questions about tea ceremony.

After the tea ceremony prologue, now it is time to practice meditation. Zazen is a sitting meditation posture of Zen Buddhism, particularly known in the West by the Sōtō and Rinzai schools. The prefix za means “seated” and the suffix zen is “meditation,” zazen is therefore the sitting meditation referring to a posture which Buddha would have adopted during his meditations.

Zazen usually takes place from 30 to 60 minutes and is performed in a dojo, or more specifically in meditation rooms called zendo, with alternating kinhin which are meditative steps of ten minutes. Traditionally, a shijosho announces the beginning of zazen by ringing a bell three times, then hozensho plays sounds and announces the end of the cycle. Before and after the session on zafu, which is a meditation cushion, a practitioner salutes hands in gassho style, bowing to his zafu with fellow practitioners and master.

Common positions to sit on zafu are kekkahuza, lotus position, hankahuza, half-lotus position, so-called Burmese cross-legged position with crossed legs or seiza, and a kneeling posture which is either on a zafu or a small bench. In these different postures, which can sometimes be painful for beginners, you can solve the problems of zazen by practicing to sit on a chair, or placing a square cushion behind the lower back to help maintain a natural curvature of spine.

The practice may differ on some points depending on the school. In the Sōtō zen, their seats face the wall of zendo during practice and kinhin walk is done at a very slow speed; shikantaza seating is aimless, it is a matter of “just sitting down” and observing the phenomena. In the Rinzai school, they sit in front of central aisle and the kinhin walk is done at a fast speed. In addition, a practitioner focuses on a kōan, which is a short discussion during the sitting. During zazen, they don’t use kyosaku systematically ,which is a stick used to strikes meditators’ shoulders in case of drowsiness or restlessness.

You can practice Zazen for a few hours or a day in zazenkai. There is a meditation retreat which is an opportunity to practice zazen about ten hours in a day: it is called sesshin. 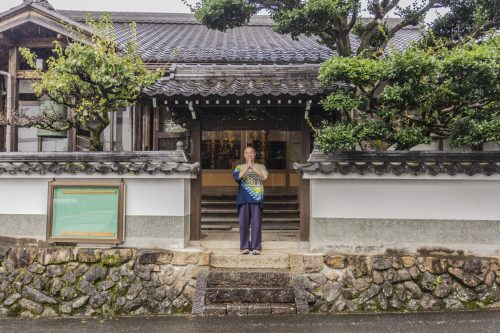 The reception at Zensho-ji temple is kind, though there may be apprehension of newcomers with  bad practice or who are intimidated by the solemnity of the exercise. 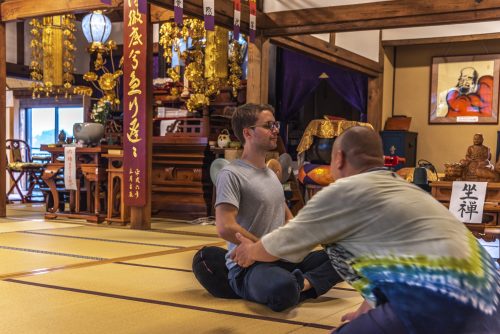 Various sitting postures quickly will reveal pains if your daily posture is not adequate. A master of Zensho-ji temple reminded me of the righteousness of my back, inclination of my head, and rhythm of my breathing, sparing me fortunately with kyosaku stick blows. You will find it interesting to note that a few minutes are enough to become aware of these defects which is difficult to see on a daily basis. Your body may be crashing constantly without necessarily sending signals of its distress. 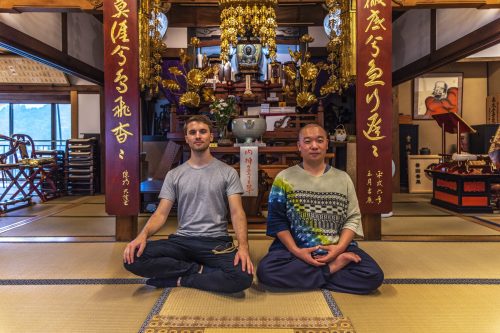 A few steps from Zensho-ji Temple, Kofuku-ji Temple offers a first approach to shuuji, where you can learn Japanese calligraphy. A monk in charge of this temple and his English-speaking wife welcomes me. The course begins with a brief history of the temple, then a short prayer with a mantra sung and murmured. You will feel its powerful vibrations. 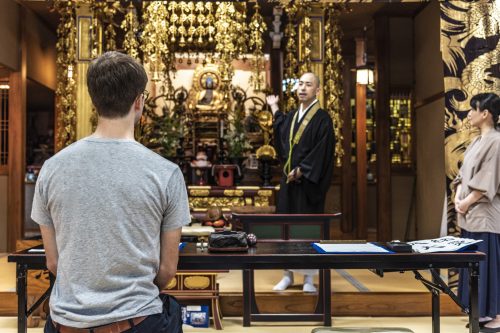 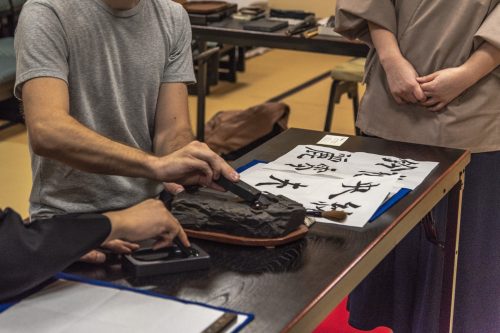 The training consists of writing your first name in kanji, which is one of the Japanese writing systems composed of sinograms. I was offered eight signs, four for each syllable of my first name, Leo. For the syllable “lé,” I chose the sign 零 meaning zero, then sign 央 for “o,” meaning center or middle. After a short explanation greeted by smiles and curiosity, as my knowledge was obviously somewhat unexpected, I was asked to proceed to the first step: rub a sumi ink stick in a suzuri inkwell to make the necessary black ink. 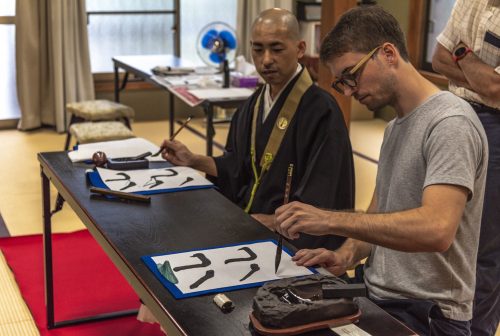 After several minutes of friction, the lesson really began with the basic exercises and basic rules of writing to respect, such as vertical lines drawn from bottom to top and horizontal lines from left to right; the latter being a bit more complicated for a southpaw. 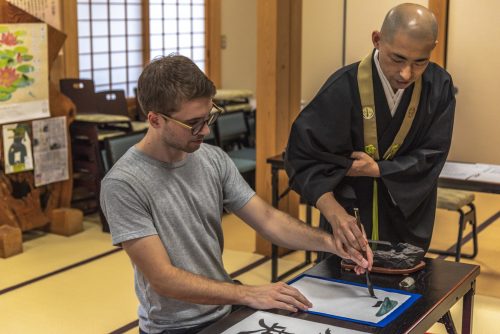 After practicing several guided test lines which give you confidence, the master gradually gives you autonomy until you almost complete drawing signs without assistance. For difficult points and gestural memory, he put his hand on my hand to make me understand all the different subtleties of writing pressure and speed which are necessary to achieve elegance and delicacy, and he sometimes even gave me hints by gesture for a dignified execution of my name.

This zen experience during a beautiful morning at Iou-ji Temple, Zensho-ji Temple and Kofuku-ji Temple proved to be a real unforgettable moment that was unique and privileged. A few hours are obviously not enough to truly immerse yourself in deep meditation, but nothing may be difficult to imagine a better introduction than to fill your five senses through the discovery of these three activities under such conditions.