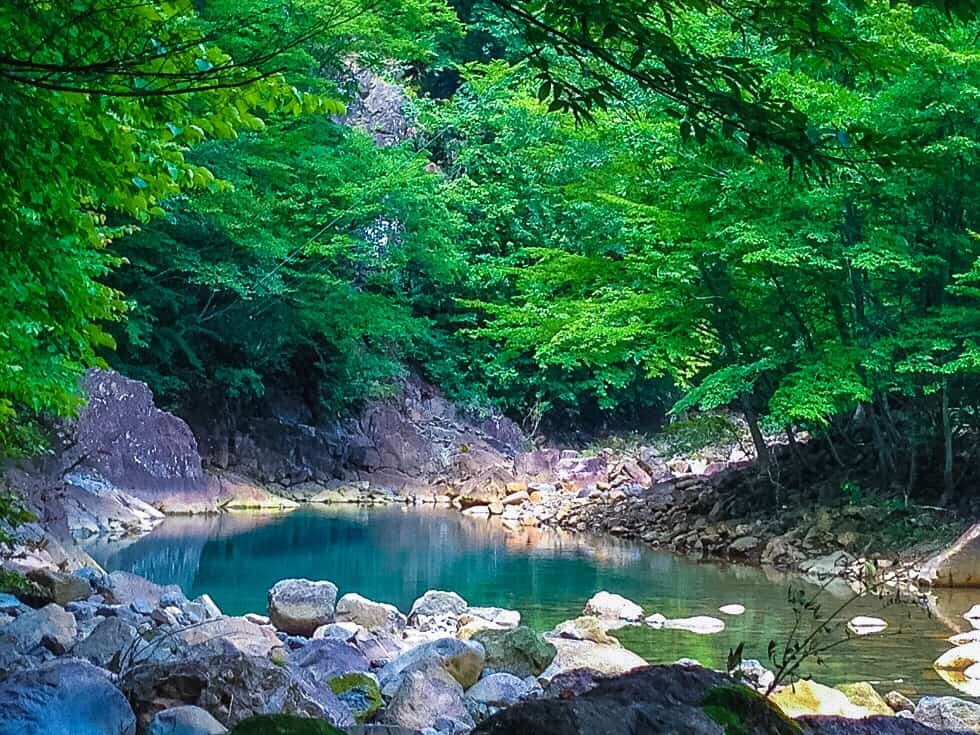 When people travel around Japan, usually going to at least one onsen is on their list of things to do. Though luxurious and relaxing, it can sometimes be expensive. There are also rules to worry about: where to put your things, having to shower beforehand, and so on. There’s also the question of what to do if you have a tattoo, or if you simply don’t like being naked in front of strangers. In that case, may I suggest a certain type of special onsen? For people on a budget, looking for an adventure, or just in the mood for something different, how about going to a “Hidden Onsen?”

An On-sen off the Beaten Path

The station at Naganohara Kusatsuguchi is pretty big for being in such a remote area of rural Gunma. Limited Express trains from Tokyo frequently stop here, and tourists board the buses to nearby Kusatsu onsen. There is an air conditioned waiting room, a gift shop, and even an adjoining restaurant for hungry travelers. However, Kusatsu, being so popular, wasn’t really what I had in mind this time. 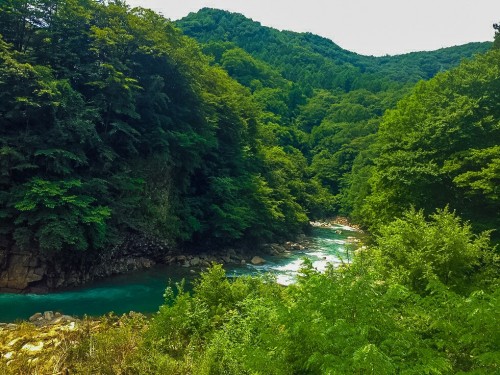 I was a little nervous getting on the “bus” to Kuni, which was more like a mini-van. Kuni Village became a part of Nakanojo in 2010, but it is much more rural. One thing about remote places, though, is that you can find some killer onsen there. As the bus drives into Nakanojo, the first thing you can see is the deep blue water running over the rocks. There is lots of beautiful scenery, and little else. Even things like convenience stores and ATMs are a bit harder to come by here, so do plan appropriately and bring some food, water, and money for the bus.  The other people on the bus were headed towards Lake Nozori, but I got off by Hanashiki onsen, a picturesque little Ryokan that I stopped at for a second, then passed on by. 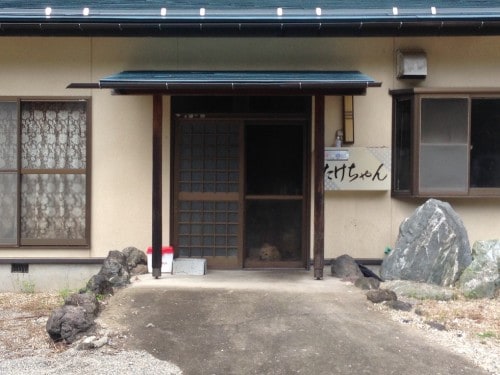 Kuni: Just You and the Sound of Crickets 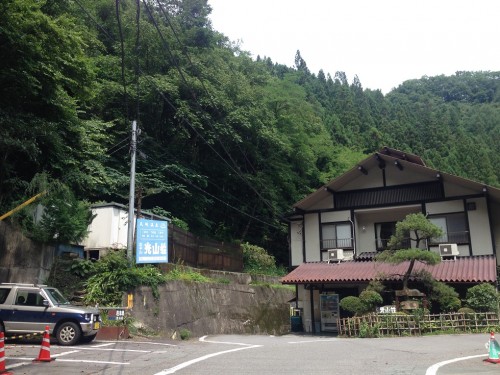 To get to the hidden onsen, you may be wondering how to find it. There aren’t really any English signs, and because of the high elevation, GPS doesn’t always work so well. It’s actually really easy though; just follow the only road! There’s no actual sidewalk, but the road is pretty empty most of the time. Speaking of which, though I took the bus, if you can drive in Japan, it is much more convenient to do so here. The bus is rather infrequent, and the drive is more relaxing. As you go by, there are a few small hotels and ryokan. The Kuni area is also a good location for hiking. From the road, you can go on the Uta no Michi trail.  After about 10 more minutes, I saw signs for Shiriyaki onsen. 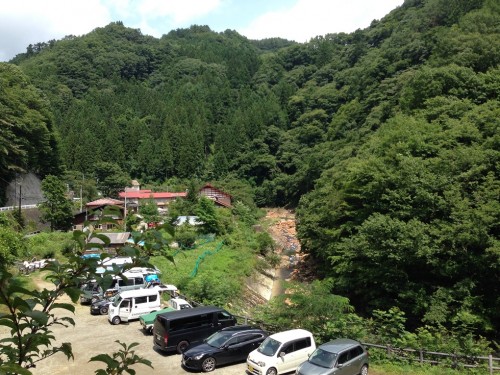 That’s right! Despite being a hidden onsen, you can get there simply by following the signs. It became obvious, as I went farther; when I saw a spring from the roadside, and next to it, a naked old man. Further clues included a family who brought pool toys with them, and a woman relaxing on an inflatable raft. There’s no real “entrance” to the onsen, just a dirt path to the water. From there, anything goes! 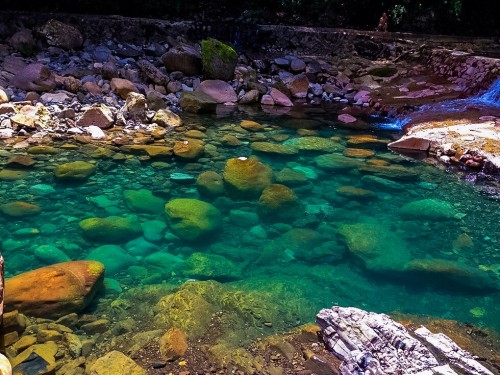 With the exception of the old man before, the majority of the 15 or so people who came to Shiriyaki onsen that day were wearing bathing suits. They appeared to be from Gunma, though not necessarily locals; some people mentioned traveling as far as two hours by car to come to Shiriyaki. Not having brought a bathing suit myself, I decided to soak my feet nearby. The name of the onsen, “Shiriyaki,” literally means “Butt-Burning Onsen.” However, the water by me was quite cool and refreshing. 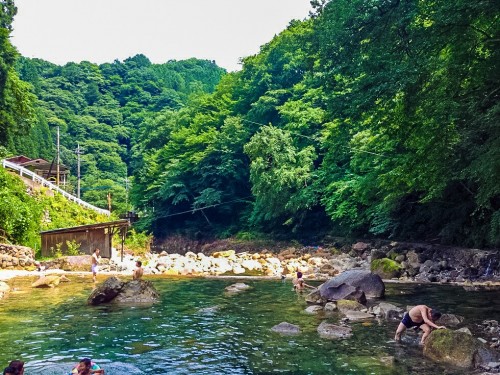 While people-watching at Shiriyaki, I noticed one kid ask his parents, “Where can I change clothes?” At Shirayki onsen, there aren’t any facilities to speak of. There’s a public bathroom across the street, but that’s about it. The onsen is just water, and nothing else. That also means that it’s free! The onsen is even pet friendly! If you want to do something here, like having a barbeque, you will need to bring the supplies. I saw a few kids had giant nets for bug-catching. This is a popular activity all over, but especially up in these here mountains, where the giant bugs often look more like Pokémon! 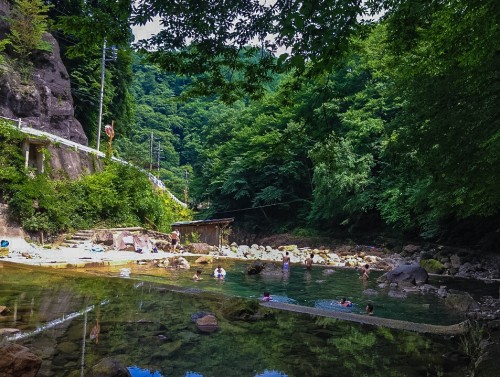 I began by relaxing by the cool water upstream; the farther down you go the hotter the onsen water gets. Even in the summer, the hot water is more popular, though many people went around to a few different pools. Please note that although there are no cubbies or coin lockers, your belongings are probably safe, just be sure to keep them away from the water. 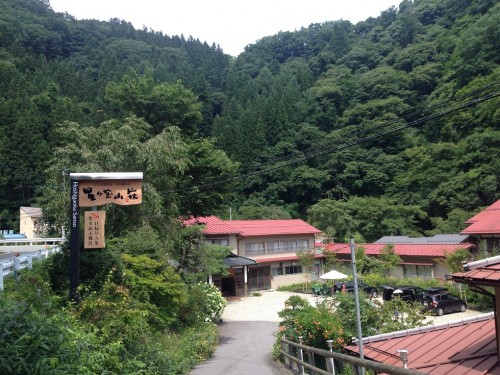 If you are looking for an interesting onsen experience, you can’t go wrong at a hidden onsen like Shiriyaki. If you’d like to stay longer and soak in the atmosphere, feel free to stay in one of the ryokan hotels nearby. Either way, Shiriyaki will definitely be a worthwhile detour on your next Gunma trip! 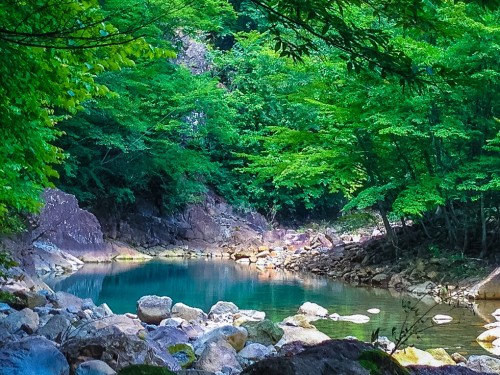