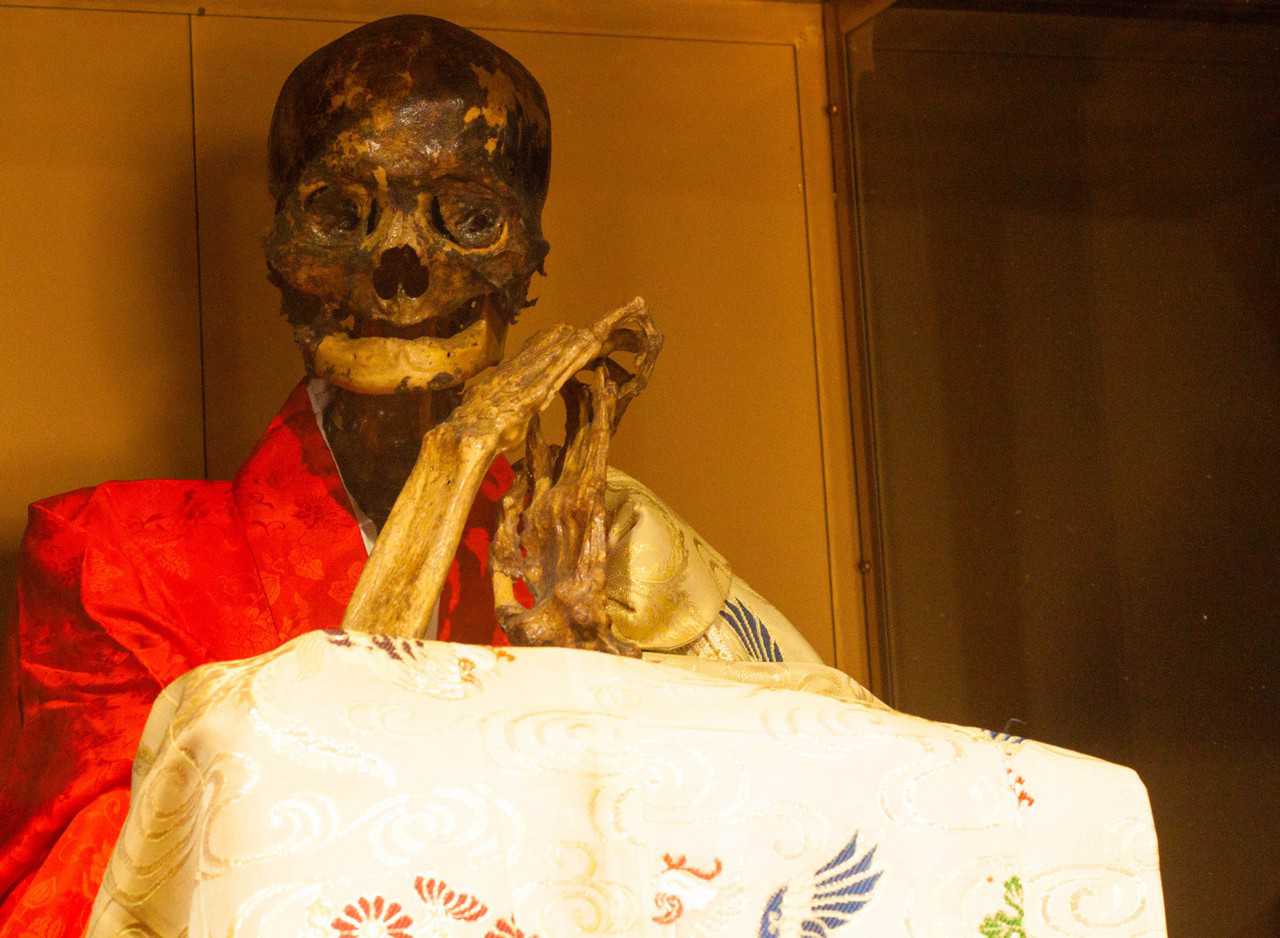 Throughout Northern Japan you can find them, scattered among the mountainous regions of Yamagata and Fukushima Prefectures. Tucked away in small inconspicuous temples are a handful of monks who willingly chose to undergo the painful process of self-mummification.

Sokushinbutus refers to the practice of self-mummification that was followed by a mountainous dwelling sect of Buddhist monks who were called Shugen-do. The practice required the monks to partake in a strict diet and rigorous exercise before sealing themselves in a tomb while they were still alive.

The monks chose this path for many reasons, to gain enlightenment, to ease world suffering, to offer themselves up for something greater. In their eyes it was not suicide, but rather a sacred process, meant to better the world and themselves.

Throughout Japan you can find around twenty Sokushinbutsu monks, seventeen are open to viewing, but many are not. Some of the most famous dwell in Yamagata Prefecture near the Dewa Sanzan Mountain range, specifically Mount Yudono. It is said that the local lakes near Mount Yudono house high levels of arsenic, which might have played a part in the success of so many Sokushinbutsu in that area. Hundreds of Buddhist Monks attempted the ritual, but only a handful of them were successful. Those that were not, were sealed back in their tombs and cherished for their sacrifice, but they were not worshipped as Sokushinbutsu.

The practice was outlawed in the 19th century, although it continued well into the 20th century before finally falling out of practice.

The Process of Sokushinbutsu

In order to undergo Sokushinbutsu, monks would begin by eating a very specific diet of only nuts, seeds, and fruit. This diet sustained them for one thousand days, and during that time, they also took part in demanding physical activity in order to drop as much body fat as possible.

Following the first three years, the monks would then switch to a diet consisting of bark and roots. These six years of fasting not only satisfied the suffering of the Sokushinbutsu but also began the mummification process by removing excess liquids and fat from the Monk’s bodies. It was also common for the monks to drink a tea made from the bark of the urushi tree during their fasting period. This tea was highly poisonous. The urushi bark is often used in creating a lacquer varnish, and is incredibly toxic. The toxic effects of the urushi bark remained in the body until after death, and acted to further embalm the organs and ward away insects and decomposition.

The final stage of becoming Sokushinbutsu was to seal the monk into a specially made tomb, barely large enough to house the monk’s emaciated body. The monks were sealed alive, first in a wooden tomb before being lowered into a specially made stone tomb. They were sealing inside this tomb, given nothing but a small bell, and a tube for air. They spent their final days in meditation, ringing the bell to signal that they were still alive to those outside. When the bell stopped ringing, the monks above removed the air tube and sealed the tomb. After another three years, the tomb would be reopened, and the body checked for decomposition. If the body was intact and mummified, the monk had gained Sokushinbutsu.

Soto Zen Kanshuji Temple is modest in its appearance; located outside the main city and a short taxi ride from the nearest train station. The temple nonetheless inspires a sense of contemplation and respect. The ceiling blocks are painted with murals of folklore and symbolic images, and the tomb in which the monk, Kouchi Houin Yuutei, was buried is encased in glass and displayed near his mummified body.

A short introduction of Kouchi Houin Yuutei is played over speakers in the room, and a guest book rests near the entrance for visitors to sign. And of course, centered in the room is Kouchi Jouin Yuutei himself, displayed in a protective case, and adorned in a iridescent kimono of white and red.

Yakushi-do: The Buddha of Medicine and his Disciple

Kouchi Houin Yuutei was born in Izumo-no-kuni in Shimane Prefecture in 1591. He became a Buddhist Priest in Kagawa Prefecture when he was twenty-three years old. He followed the sect of Yakushi-do Buddhism, which follows the Buddha of Medicine and Healing. Unfortunately his mentor and guide passed away when he was 27, and so Kouchi Houin Yuutei decided to travel to Yudenyama, a mountain located in the Dewa Sanzan mountain range in Yamagata Prefecture.

It was here that he learned about the self-sacrificing ritual of Sokushinbutsu, and the idea gave him hope. He continued to visit surrounding areas during the Edo Period and learn more about the process. Towards the end of his life he moved to Fukushima Prefecture, and decided that he would undergo process of becoming Sokushinbutsu in order to help stop disease from spreading throughout this area.

When he was ninety-two years old he began the process of becoming a Sokushinbutsu, and was later unearthed and worshipped as having completed his journey.

He turned to be the Sokushinbutsu of the Yakushi-do sect.

You can visit him at Kanshuji Temple by appointment.

Take the JR Suigun Line bound for Hitachi Daigo, get off at Iwaki Asakawa Station. The train takes about 1 hour and costs 840 yen.

Take a taxi to Kanshuji Temple. Roughly 1,400 yen one way.