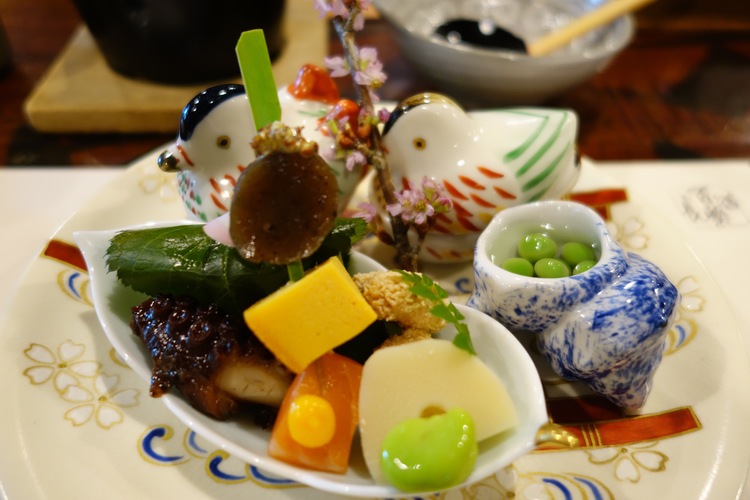 Kobe Shushinkan Brewery (神戸酒心館) is one of the favorite places that I like to show visiting friends and family. Situated in the heart of the historical Nada-Gogou (灘五郷) sake producing region, Shushinkan offers a quick glimpse into the region’s history and basic sake-related information for those who are interested in Japanese sake. Gift shop near the museum provides sake tasting and explanations of the brewery’s popular products, and a chance to bring home the tastes that you enjoyed. But today, instead of showing friends the goodness of Nada sake, I was treated lunch at Sakabayashi (さかばやし), a restaurant hidden away in a quiet corner inside Shushinkan, that promotes seasonal menus that pair with the brewery’s sake. 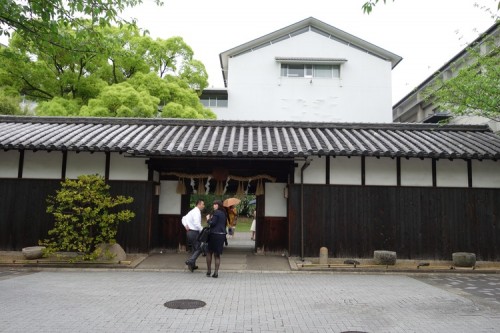 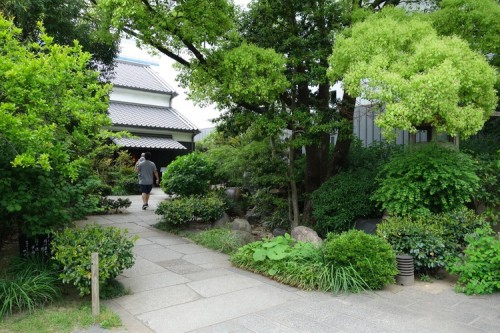 The special monthly kaiseki-ryouri was what we had. Like all other kaiseki menus, the most seasonal ingredients were featured. Each of the restaurant’s kaiseki sets came with an aperitif – Fukuju Daijinzo sake (福寿大吟醸) – a pleasant and full-bodied sake that would wake any appetite. Adding an extra JPY 1,200 would allow you to try and compare the brewery’s three other sake with your meal, including a junmai-jinzo (純米吟醸), a junmai (純米) and a jinzo namashu (吟醸生酒). 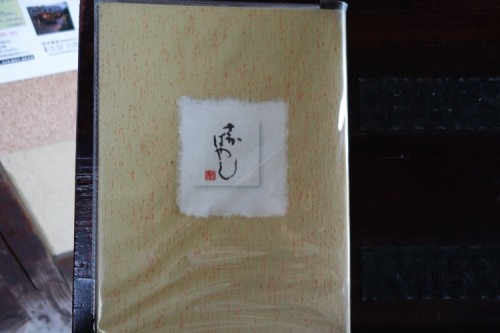 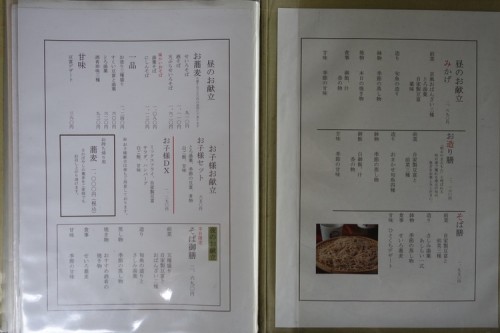 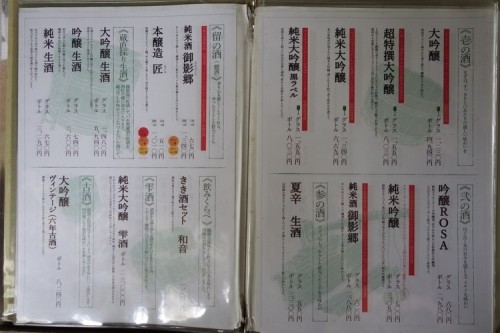 Starting off with Sakizuke (先付), the appetizer was organic vegetables in a special sesame-tofu dressing. Vegetables were early spring veggies of celery and ashitaba (明日葉) plus daikon. Tofu dressing was almost the star in this salad – rounded and with a controlled hint of sesame aroma, it contrasted with the lightness of the fresh vegetables and gave weight to each bite at the same time. 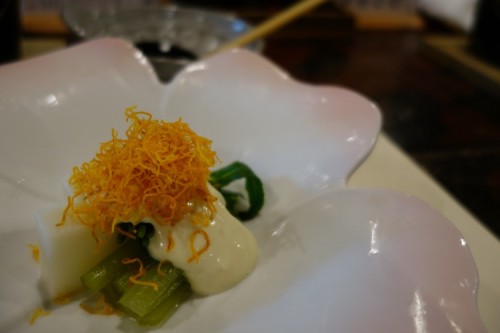 Then came Hassun (八寸), the second course with a sushi and four little dishes, carefully arranged to show the theme of the season. This was the moment that my admiration for the Japanese’s respect for food and nature was renewed: Plating of the colorful ingredients was jovial enough to look at, not to mention the ornamental china that held just the proportionate amount of food. 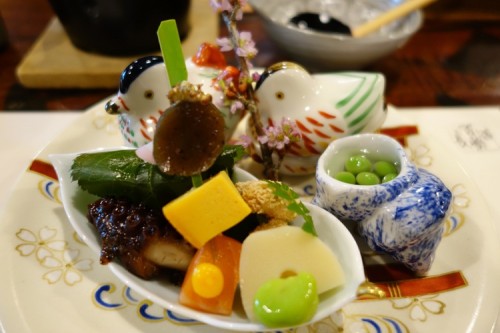 From the front there were broad bean, bamboo shoot, konjac, sweet egg, salmon, octopus, oshi-sushi of sea bream in sakura leaf; and in the three side dishes green peas, hijiki no nimono (ひじきの煮物; cooked hijiki) and mizuna no goma-ae (水菜胡のごま和え; mizuna with sesame). Each ingredient was cooked respectively to best present its flavor and seasonality. In the middle, there was a small branch of sakura feelingly placed to remind of the cherry blossom days that came and went. 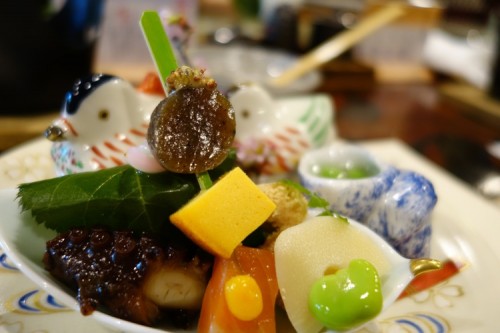 Third course was Owan (お椀), a clear soup with fish cake and snow fungus. The soup was simple and heartwarming, which cleared our palates before welcoming the forth course, Otsukuri (お造り), a sashimi dish of sea bream and skipjack tuna. On the side there were a special soya sauce made of sake ingredients (which was lighter in color and taste, recommended for the white fish) and a regular type sashimi soya sauce for the tuna. 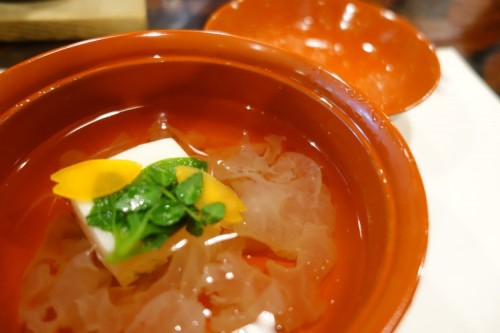 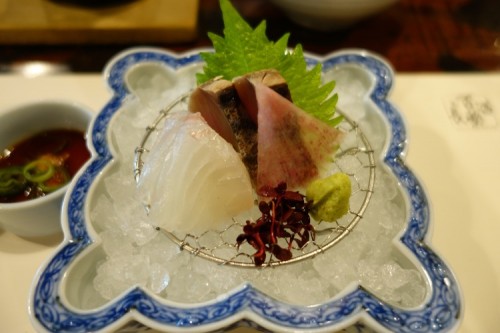 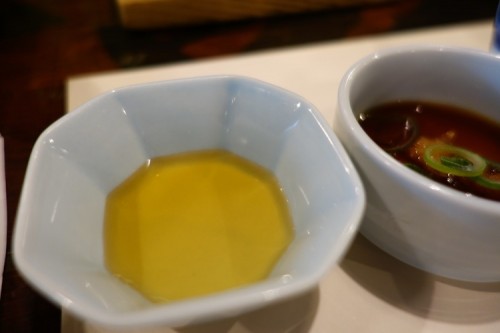 Nimono (煮物) was the fifth course, which was a small hot pot with crams, kombu, seaweed, mizuna and bamboo shoot. Hot pots are not my personal favorites, and as part of a course lunch on a slightly humid afternoon, I have to say it did wind down my excitement for a minute – not saying it was any bad, though! 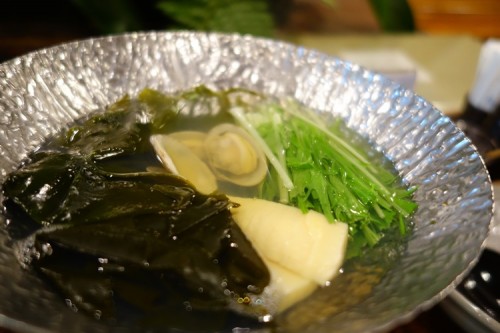 The sixth course, Sumono (酢物), was salmon nanban-zuke (南蛮漬け; fried fish in vinegar sauce), which delightfully cleansed the tastes in our mouths again, this time with acidity. 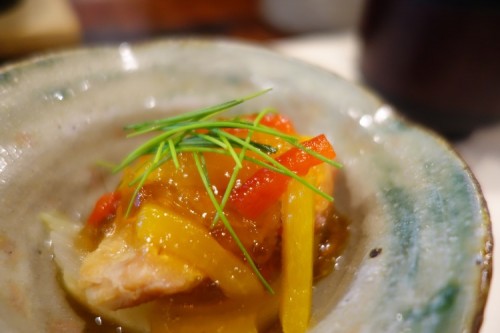 The seventh course was Gohan (御飯; rice), Kou no Mono (香の物; pickles) and Tome-wan (止椀; miso soup). The rice, cooked with bamboo shoot and dashi, was in my opinion another highlight of the set. I’m not sure since when meshi (i.e. rice dish) at the end of any course meal has become something I like to look forward to, despite how thrilling the rest of the meal is. Miso soup, on the other hand, would be marginally too filling if I finish everything (which we should politely do so) – the portion is more reasonable for guys, I suppose. 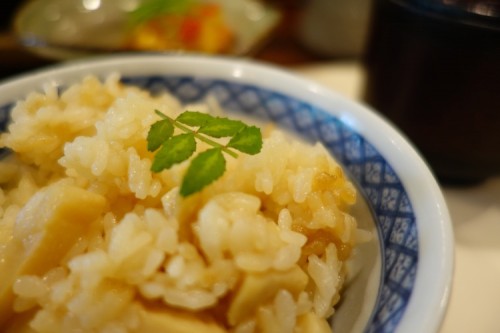 The meal was concluded with a ball of lemon sherbet that lifted any residual heaviness in mouth. 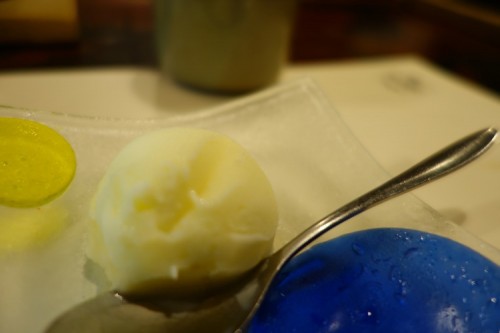 Overall, the lunch experience at Shushinkan was relaxing, regardless of the somewhat upbeat serving tempo (for a kaiseki anyway). We resolved that the place would make an ideal business lunch or a girls’ day-out, with its open setting and tranquil atmosphere. (Apologies that I could not take any pictures of the interior as there were other customers.) Homemade soba, which the restaurant claims to be their special, would be something that I will come back for. 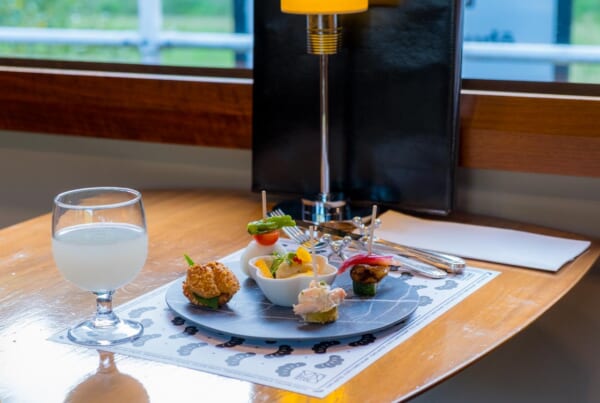 From Kinosaki Onsen to Amanohashidate: Ride a Gourmet Sightseeing Train in Japan