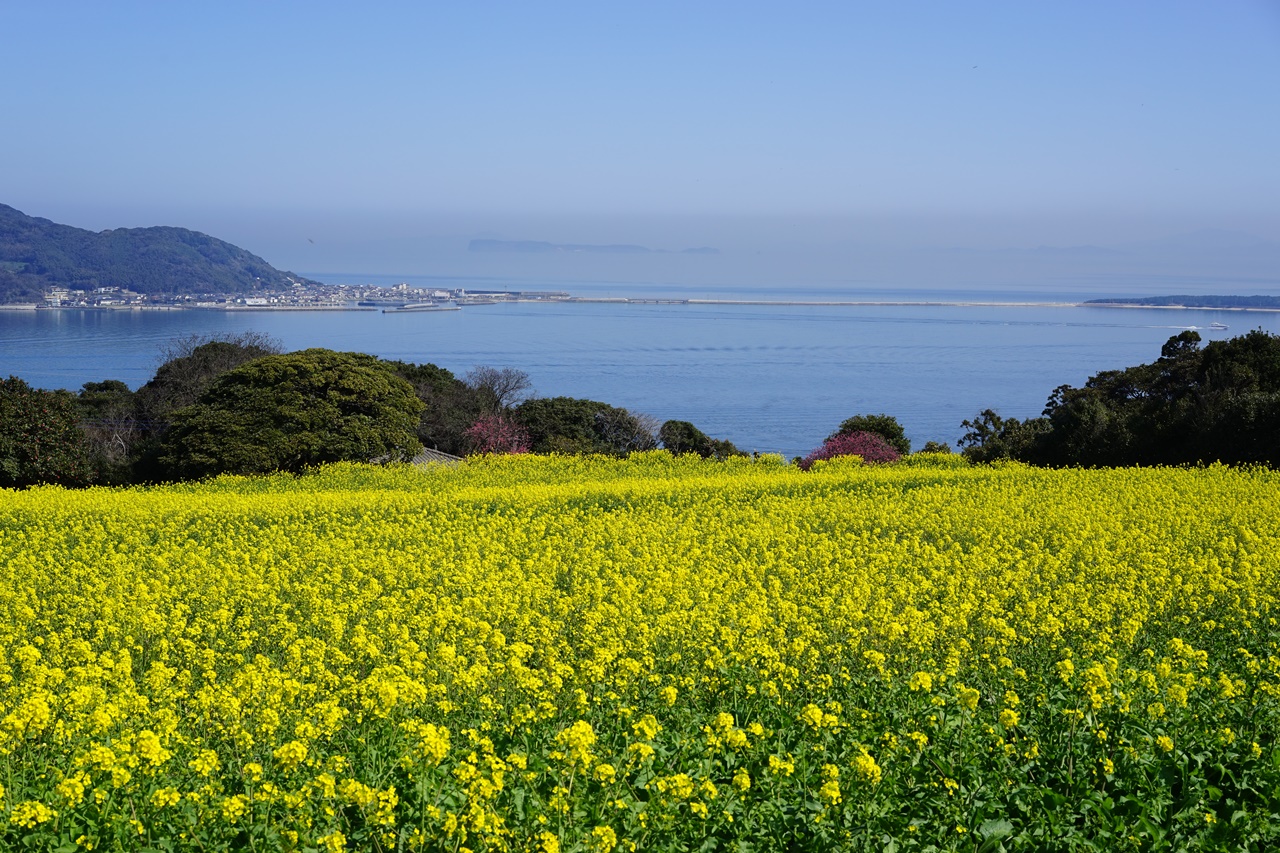 Leisurely bicycle ride on the island of flowers: Nokonoshima

Nokonoshima: The Island of Flowers

The island of flowers, Nokonoshima, sits across the sea from the main island of Kyushu. Its bay harbors Fukuoka, the largest and most populous city in Kyushu, known for its bustling streets and yatai food carts. Looking across the sea at the urban landscape, it is easy to forget that Nokonoshima is part of the city.

The contrast was immense. Just a little more than an hour ago, I was fighting my way through the crowd of commuters at the Hakata bus terminal in central Fukuoka city. There I hopped on a bus to Meinohama Ferry Terminal, where a ferry transported me to this little paradise of nature in just ten minutes, away from the crowds and the hustle and bustle. 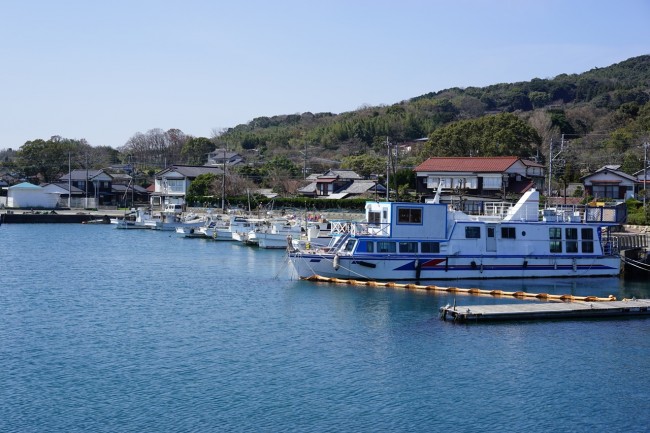 Nokonoshima is a tranquil island situated in the middle of Hakata Bay measuring only 12 km in circumference, with a population of approximately seven hundred. Despite its proximity to the city center, Nokonoshima is surrounded by crystal clear sea water, almost tempting one to imagine oneself on one of the islands in Okinawa. The island is best known for its Island Park, which showcases breathtaking flowerbeds throughout the year. But the island has so much more to offer. 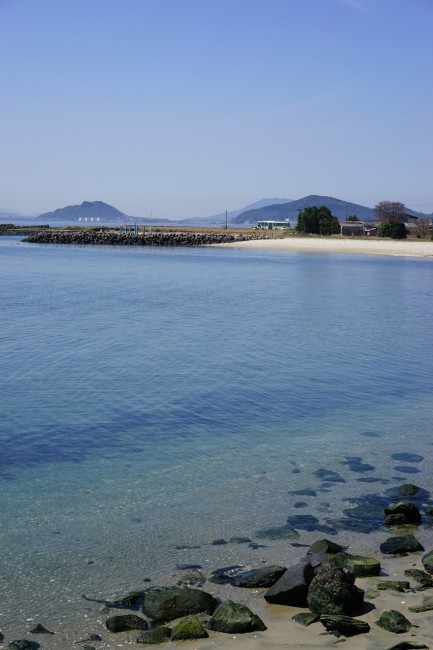 Explore the Area by Bicycle

With bicycles and buses, it is tempting to take the latter straight to the park, as most people do. I figured it would be interesting to explore the island on a bicycle, and the warning of an uphill ride by the lady at the tourist information center fell on deaf ears. The rental bicycles are owned by a small burger place right next to the terminal, and I could choose from ordinary (300 yen per hour/1,000 yen for whole day) or electric-assisted bicycles (400 yen per hour/1,500 yen for whole day). I went for the latter, just in case – but I ended up hardly using the electricity function. For those who work out regularly, the ordinary type should be good enough, as the upwards route is not that steep. Opt for the electric-assisted type if you are less confident or do not want to sweat that much. Do not forget to get a map of the island from the tourist information center, and check with the staff about the best route to pick.

I took the east route, first going along the coastline before turning to a path winding uphill. As I slowly pedaled up the slope, I was greeted with breathtaking views of yellow canola flowers, a harbinger of spring, blossoming against the vast sea and seemingly motionless boats and ferries in the background. The advantage of riding a bicycle over taking a bus is that you can go at your own pace (provided that you do not have athletic travel companions who are going far too fast). Stop along the way to feast your eyes upon the scenery, or to take pictures of flowers, the sea or deserted houses.

Here and there I could see lines of trees, from which plump tangerine-like fruit hung. They are no other than one of the treasures or symbols of the island, a sweet and sour citrus fruit called Amanatsu, which literally means “sweet summer”. The fruit is harvested from April onwards every year. 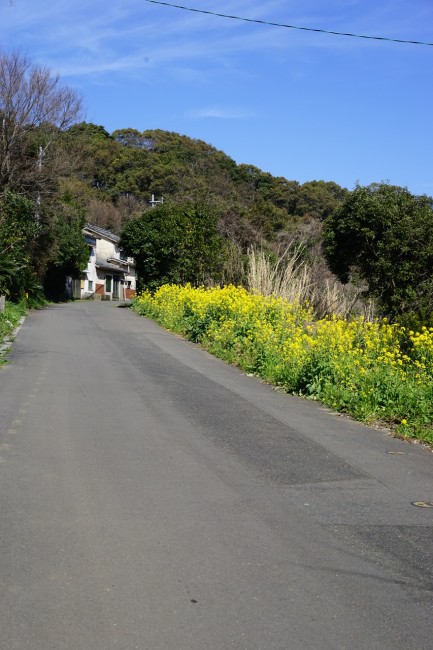 Canola flowers blossoming here and there on the way up 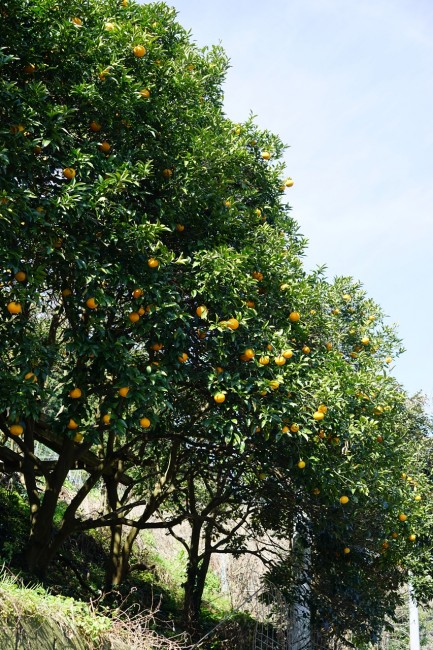 Amanatsu trees ripe for the picking in April

It was mid-March, a time when the canola flowers were in full bloom. When I arrived at the park, I went straight to look for them. I was not disappointed. The vast fields of canola flowers which spread out before my eyes were a sight to behold. Even better views await those who are going in early to mid-April, as you will be able to see cherry blossoms and canola flowers vying for attention at the same location. Many people also come to the park to see cosmos in October – apparently the busiest time of the year. Apart from admiring flowers, you may also, as I did, stop over to feed the goats or the cute little rabbits in the park. 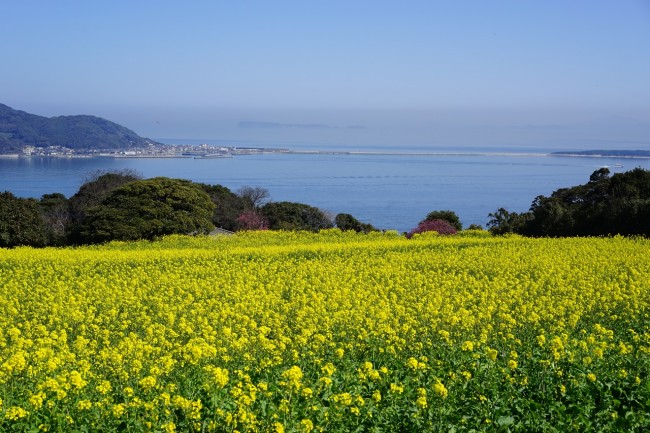 Vast fields of canola flowers set against the sea

The way downhill was easy as expected. I went along the nature exploration route to the west, and as it was steep in parts with broken branches laying on the ground it might be a good idea to go a bit slow. The coastal ride back to the ferry terminal was no less impressive. 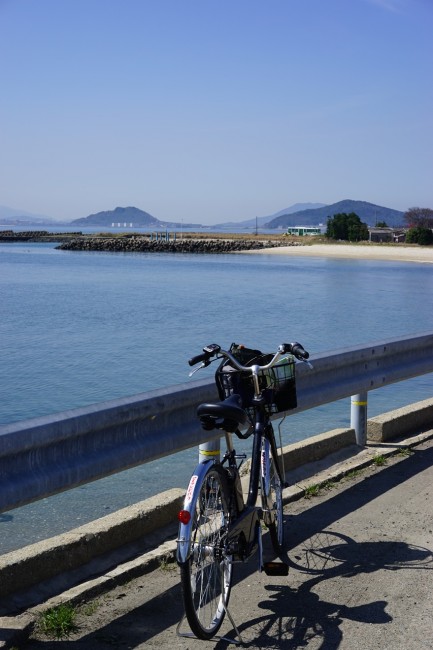 Bicycle riding along the coast

Before you leave, do remember to purchase locally produced vegetables or some of the many seasonal citrus fruits available at the market just next to the ferry terminal. My eyes glittered when I spotted blood oranges in the lineup. I ended up purchasing nine, and you can imagine how heavy my backpack became on my way back. But no regrets, as they were really tasty! 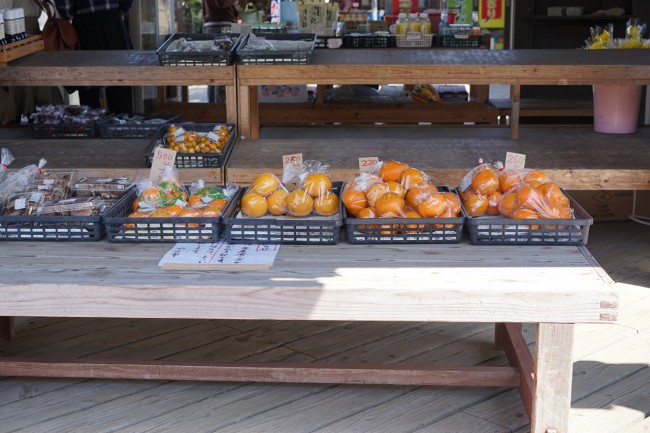 A range of citrus fruits available at the market

On Kyushu’s main island, you must first reach Meinohama.  In Fukuoka city, take 302 Bus from Tenjin Terminal-mae station towards Nokota-senba.  Get off at Nokoto-senba. The journey costs Costs 370 Yen. 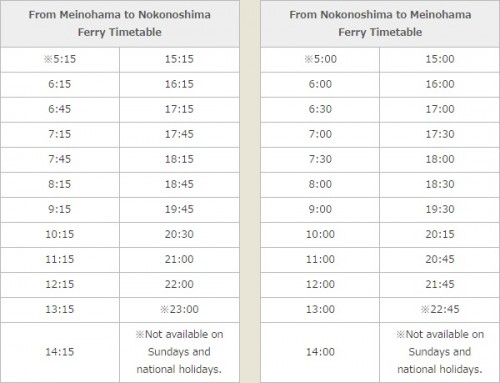 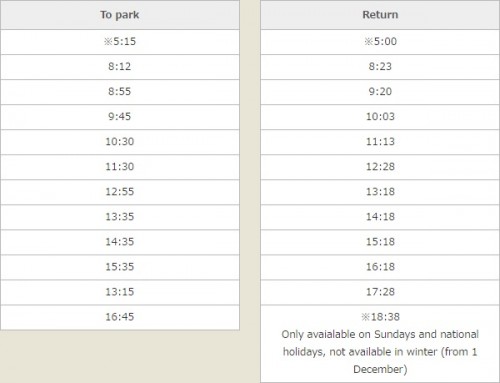