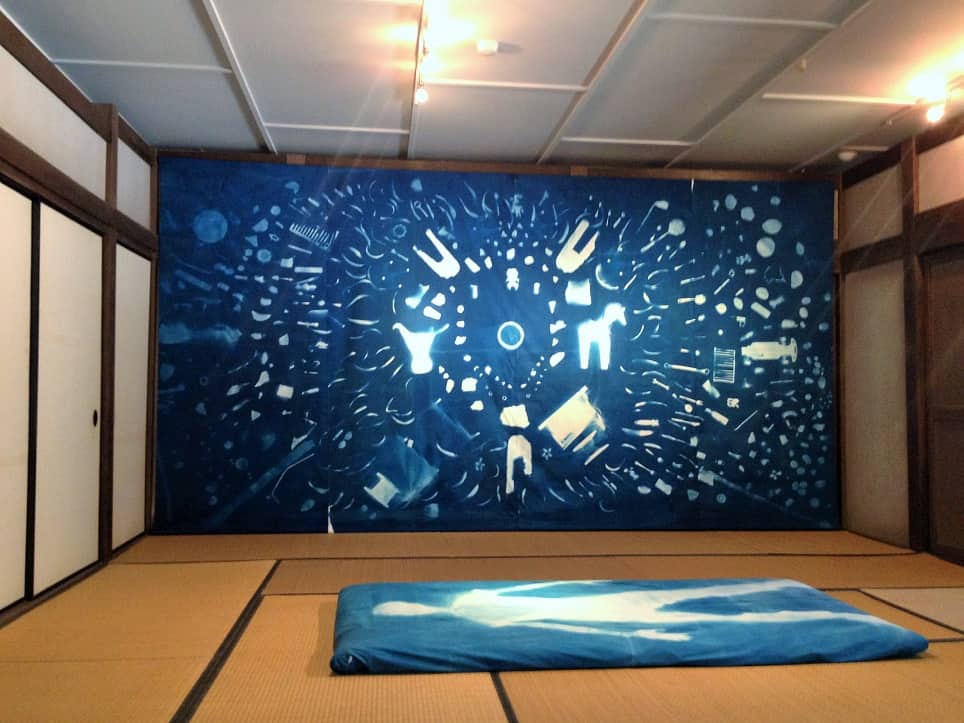 A Tour of the 6th Nakanojo Biennale 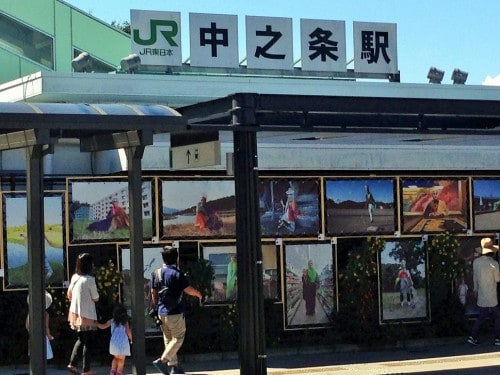 In our previous articles on Nakanojo, we discussed the upcoming art festival Nakanojo Biennale. It takes place over the course of an entire month every other year in the rural Gunma town of Nakanojo, and features over 160 artists from all over the world. They don’t display their art in typical galleries; instead they re-purpose old buildings: schools, factories, and community centers. In this way both the old and the new are combined. Seeing this remote town filled with tourists and art enthusiasts adds to the friendly atmosphere; Nakanojo Biennale is a fun-filled event like no other! 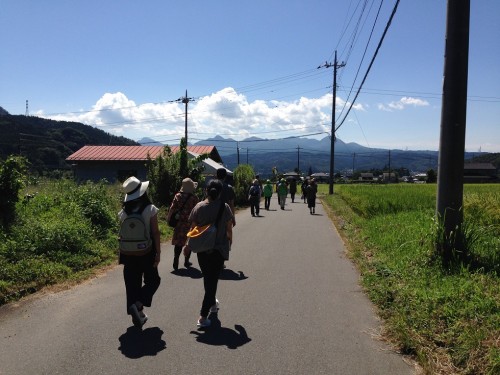 Our tour group for the day 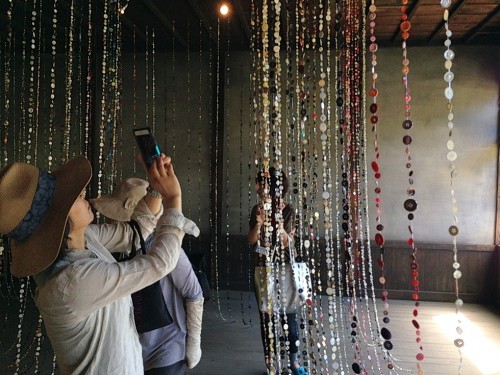 Even before I arrived at the Biennale I noticed something odd: On the rural Agatsuma train line, rather than just the usual handful of elderly people, all the seats on the train were taken. As I suspected, most of the train emptied out at Nakanojo station, which was also being used as a gallery space. On the station walls was a photography collection showing different people as “Kannon,” Buddhist deities. It was artful and fun; a good starting point for the day. At ten o’clock, many of the exhibits begin all over town. Customers have two choices: either take one of two bus tours or rough it on foot. It’s hard to recommend one over the other, however for those like me who were just taking a day trip a bus may be preferable. I took the “Satoyama” tour, which is a guided tour around some of the more central parts of Nakanojo. I use this word liberally, since just about anywhere in this town is pretty darn inaka. There is also another tour that goes to even more remote areas of Nakanojo, such as Kuni Village, which I visited previously. Before you take either tour though, be sure to buy a copy of the Biennale guidebook and a passport. Both contain useful information, and a completed passport can be redeemed for a discount at a local onsen! 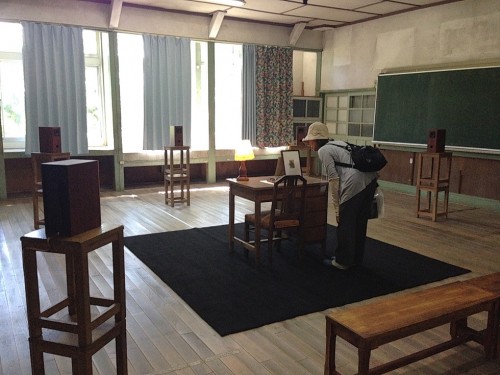 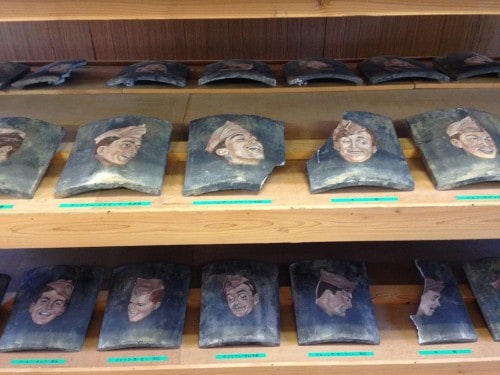 Going to Nakanojo Biennale is also a great way to see the natural beauty of the region. During the tour you will be driving through beautiful locales during the peak of rice-growing season. The best exhibition area in Nakuta was the old Nakuta School. One exhibit, called “Polyphony 1945” by Kiyono Kobayashi, features a reading of old letters from the wartime period. It was a serene and relaxing exhibition, evoking a strange nostalgia even for me, who wasn’t around back then. Continuing with the nostalgia theme are “GHQ Portraits” by Ebosi Yuasa. They are portraits of US army soldiers done on roof tiles during the American occupation. My only gripe with this part of the tour was how rushed it was. The tour guides, understandably, don’t want to leave anyone in the group behind, and want to cover a lot of ground during the day. However, if you want to enjoy art at your leisure, this may get annoying fast. We spent notably more time in other galleries, especially areas which had bathrooms, food, or gift shops. This is fine, except that the reason to go to Nakanojo Biennale is for the ART. I thought I’d be in a similarly bad mood for the rest of the tour, but thankfully things got better before long. Still, for those to whom enjoying art should be done at leisure, I’d recommend staying longer, possibly with an overnight stay at one of Nakanojo’s great onsen hotels. 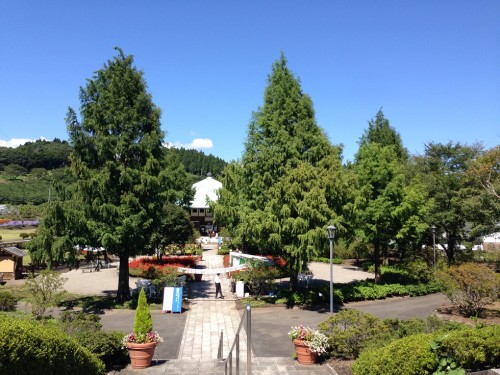 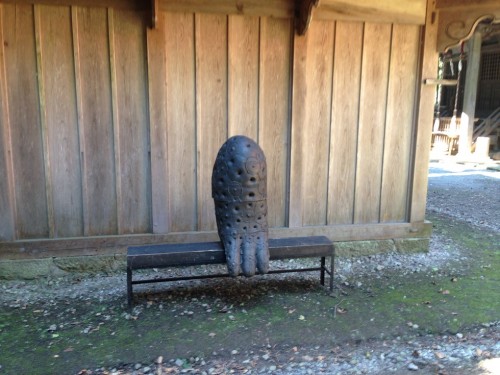 Our next stop was the Michi no Eki Rest stop, where we spent about an hour. Luckily, there were some good exhibits around here, and our group had much more freedom to move around. Nearby to the rest top was the Reizan Takeyama Mountain. It has a hiking course, where you can see the 33 Kannon statues that I referred to previously. Recommended exhibits in the area include “Invisible Whisper” by Jessica Fu, a great auditory experience in a small forested area. Also, check out the “Festival of Mukau,” a sculpture exhibition inside the grounds of Chikato Shrine. The shrine area is a great spot, and I wouldn’t have known about it if not for Nakanojo Biennale. With these galleries and others, many works at Biennale are abstract to a degree, and rather than showing explicit themes, concentrate more on the “in between.” In some cases, the area around the exhibit may be important than the work itself. 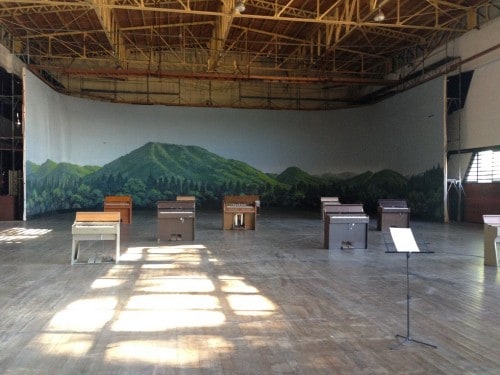 “Somewhere far away where this sound is unheard” by Shunsuke Watanabe 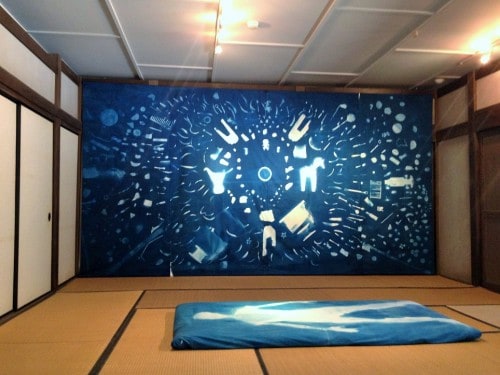 “Shadow of Lives” by Shunya Asami

After a great lunch at Minohara Park, we went to Isama Studio. Another formerly unused school, it was later used as a setting for the popular movie “Sleeping Man,” and is now a film museum of sorts. In what functioned as the bedroom of the main character now resides a “photogram” collection by master artist Shunya Asami. Around the room are objects and news clippings form Natori, Miyagi, a town that was deeply affected by the Great East Japan Earthquake in 2011. Mr. Asami explained to me that he is making a “Map of Time.” “Things get lost with time,” he says. “But I don’t want to forget these things.” The art shows effective use of light and shadow to sort of illuminate these memories, bringing them into the forefront once again. Going even farther back, Asami san presented each member of our tour group a petrified eucalyptus leaf from Hiroshima. 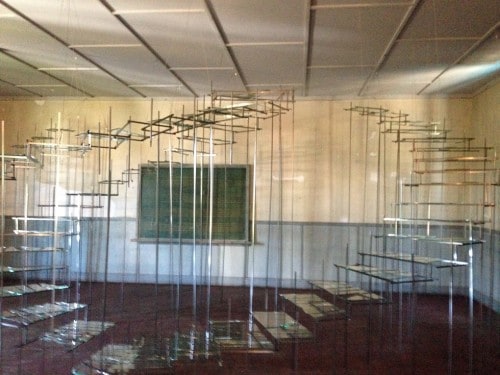 Next up was maybe my favorite piece of the day, “Figment,” a glass sculpture by the talented Kyoko Fujiwara. Fujiwara san, who has been to Biennale previously, seemed especially happy to be back in Nakanojo. “This town has gotten a really international sort of image. Plus, the scenery is really beautiful no matter the season.” Biennale, it turns out, is not simply for Nakanojo, but an artist exchange program of sorts. Last year, Ms. Fujiwara did seminars and exhibits in China, and was able to reunite with old artist friends in Nakanojo. “We’ve really become like a family, I want to see them again once this is over.” The installation itself is a set of carefully constructed glass steps taking up the whole of what was an old music room. The steps were inspired by a music scale left on the chalkboard, and had attracted a big crowd to the old classroom. 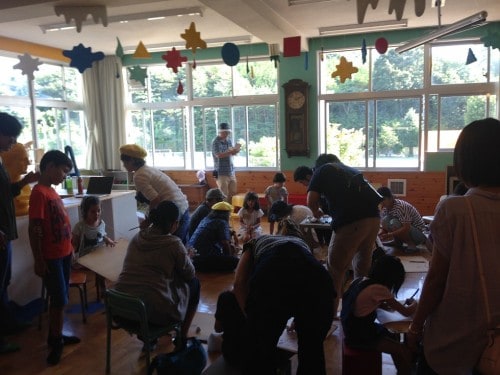 A children’s workshop at Isamamura

The last stop of my Biennale tour was Isamura, a former school now used as a cultural center. This place was especially popular with children; some of the artists were doing art workshops and teaching them to make various handicrafts. Isamamura is also being used as a stage for performance art, such as “Light and Shadow,” directed by artist and musician Jinya Imai.  He is a Biennale veteran, having first come back in 2011. “It seems like time has stopped since then,” he says, “I like the laid-back atmosphere of Nakanojo.” According to Imai san, though Nakanjo is in many ways a traditional kind of Japanese small town, the avant-garde art all around creates a mismatched feeling that is entirely unique. In addition to other exhibits, Isamamura features a large gift shop with all sorts of things: from clothing to jewelry, all made by Nakanjo artists. It will make a great souvenir to commemorate your trip to this great event! The Biennale will last all month, ending October 9th. Why not take a day or two to check it out? 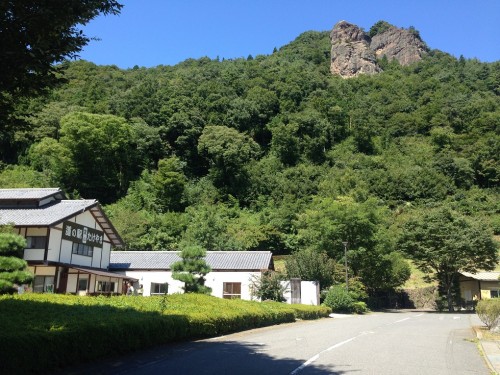 The bus tour is available only on weekends and national holidays and please make a reservation in advance.
However, if there is a spot on the bus, you can join the tour even if you didn’t make an booking.