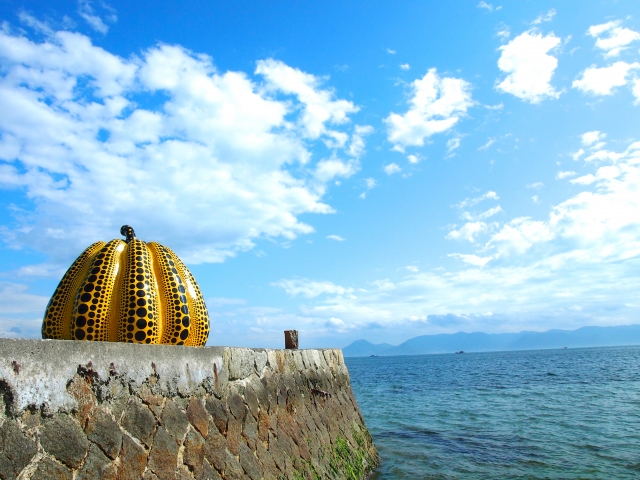 Naoshima Island: How to Spend the Evening at Miyanoura Port

In the evening and closing our day-trip circuit of Naoshima island, we meandered back to Miyanoura port. As night came to Naoshima, we found that it held a small assortment of lights to keep the island spirit from flickering out.

The first stop was the Dormitory at Kowloon hostel. The name called to mind junk that I’d seen floating near Hong Kong, with only distant twinkling lights hovering in the night. That feeling wasn’t far from the campsite fire’s warmth of Naoshima’s Miyanoura at night. Only my friend had booked a bed at Kowloon, but the hospitality wasn’t reserved for guests. The manager immediately began reciting the names of tennis players to find whoever matched my face. We decided on finding dinner so we could recover from the day’s uphill exertions.

Wandering the Streets of Miyanoura: Cafes, Bathhouses, and More

Wandering the night was like a stroll through a displaced Caribbean town. First along the road was NaoPAM – a café with the openness of a beach house. It was closed or soon closing, though. We were in a mood for dinner, so we kept to the road.

The next building was a bathhouse named I <3 Yu (a play on the Japanese word for hot water). Bathhouses (sento) along city streets in Japan are often humble – a shack with an unassuming entryway, marked by a noren with the character for hot water. This building might have been normal, if set among colorful villas in a Latin American town. But in Miyanoura, it was the town’s centerpiece with luridly juxtaposed tiles and people lingering here and there at the entry. The building front was a display. The sento entryway did look out to an alley avenue and a small island bar off to the left, but that would have to wait.

We turned the corner just past I <3 Yu’s colored building. Another midnight light spilled warm into the adjacent street, so we didn’t have to peer peckish into an abyss void of restaurants. The building was lifted not only from a shanty town, but off a shipping vessel.

Approaching its side, we realized the glow was emanating from the open entry of a cozy sort of diner named Little Plum. It was so authentic I could imagine 50s rock music wafting on the island breeze, and my friend and I would be the expats to relish this island sensation. We walked to the low patio fronting the diner and were a little dumbfounded. The building was a repurposed shipping container.

We sat down in the light, just across from the counter. A small boy ran occasionally between the occupied and unoccupied tables. A man called to him cheerfully – his father, who was one of the management. The building’s appearance and our menus were diner-like, and the family staff added a generous mom and pop feeling to the mood. I don’t know if it was a uniquely Japanese experience, but it was pleasant and tasty.

The menu had dishes as simple and hearty as what you’d expect from a traditional diner. They were the Japanese conception of classics – omuraisu (omelette + rice) in place of omelettes; Mexican Jambalaya as a suitable replacement to the carbohydrate heaps of homefries. Full, fat bottles of ketchup served as the classic diner condiment centerpiece.

Instead of the traditional bottled milk finish we would have had at I <3 Yu, we had hot coffee to wash down dinner.

We went back into the night with bellies distended as much as the tending warmth of the diner. The air was cool and I could imagine a fog rolling in with the ferries. I could also imagine entering a state of fog-headedness with whatever Naoshima had brewed up.

Have a Nightcap at SARU Cafe and Bar

The bar – SARU Cafe and Bar – was another snug piece on life-in-miniature Naoshima island. It could fit three tables at standing height, though there were stools. The bar and its overhanging liquors were a sort of greeting booth in from the cold. From our table nearest the door, it was comfortable enough to lean over and ask the bartender for a drink.

Music played, but nothing like a fervid rock anthem or cool jazzy reverie. Prolonging the comparison to the Carribbean, this place beat with reggae rhythms. In an unexpected accompaniment, a group of Australian twenty-somethings were chatting in a corner a couple arm lengths away.

The selection included beers brewed at a Naoshima micro-brewery called The Tale of Naoshima. A bottle of one – Shogamugi no Sake (Ginger beer), which I found delightfully sweet – cost between 700 and 800 yen. It was a price unfair to the taste and the fact I was able to experience said taste while breathing the same island air of its brewing. The Tale of Naoshima had three or four varieties, including a lager and pale ale. I only tried the ginger beer and the lager, but they were beers worth a slow nursing.

As drink coursed through our bodies, we coasted through conversation with our Australian neighbors. They were film students, and their interest in Naoshima was a genuine and journalistic one.  They were here to stay a night at Naoshima island’s Benesse installation. The island had a concentration of artistic voyagers, and this bar was a great way to meet such travelers. Intimate, but not closed, as the imagined blue island sky that stretched overhead with the rippling reggae.

Sadly, just as the owner started playing death metal, it was time. I handed my Naoshima glass bottles to the bartender. The last ferry from Miyanoura left at 20:25, and I had to reach Uno and catch the last 22:00 train. The closing day’s sense of wonder had earlier been broached beyond my attention, just as the bartender had uncapped the brews at an unknown time for an intoxicating drink.

How to Get to Naoshima Island and Miyanoura Port

From Uno Port: 290 yen one-way ferry. Check the ferry schedule at the Shikoku Kisen website. To get to Uno Port: From JR Okayama Station, take the JR Seto-Ohashi line towards Kojima station. Change for JR Uno Line at Chayamachi station, and get off at Uno Station (580 yen one-way.)