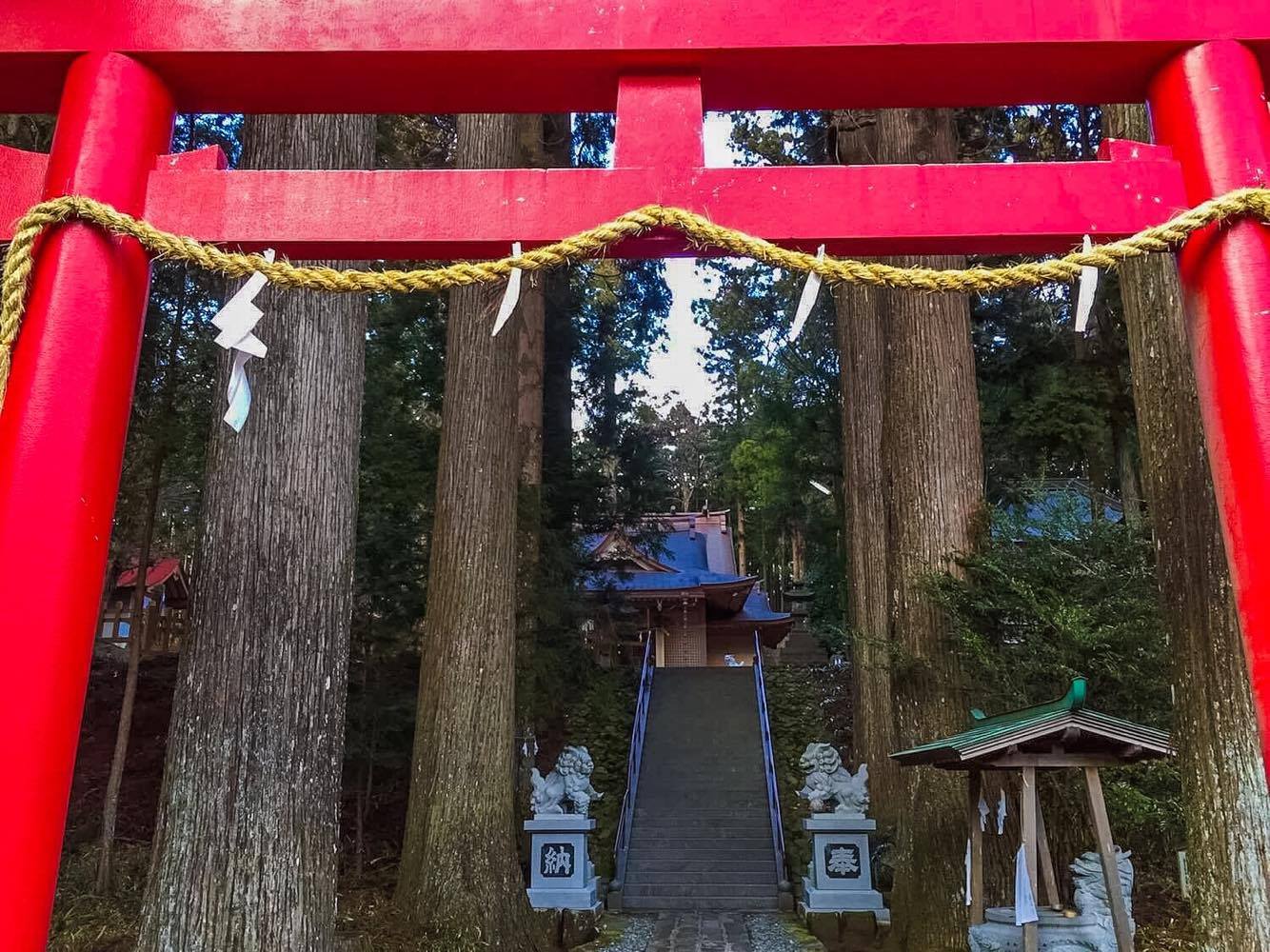 Shizuoka: Shrines Dedicated to Fujisan and a Lava Cave to the East of Mount Fuji

To the east of Mount Fuji (Shizuoka Prefecture) there are three must-see places to visit if you have the opportunity: first Fuji Sengen-jinja and Suyama Sengen-jinja, two shrines dedicated to Princess Konohanasakuya, the Shintō divinity associated with Mount Fuji, and the impressive cave of Komakado Kazaana.

Wherever you plan to go, I suggest that you take roads 180, 152 and 23 connecting Fujinomiya (west of Fuji) to Subashiri and Gotenba (east of Fuji). Those places are the starting point of  three of the four hiking trails (the fourth is Yoshida), which leads to the fifth station from where you can climb Mount Fuji. Taking this road, you will constantly follow Mt. Fuji: a grandiose spectacle! For American drivers, this article explains how to drive in Japan. 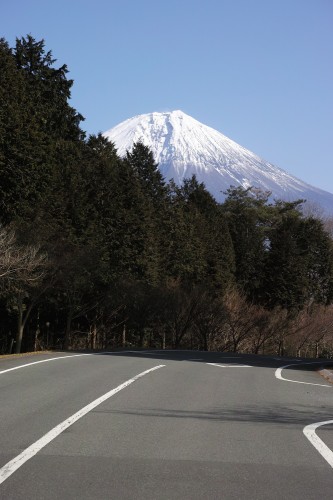 I discovered there was trekking in the southeastern area of Mt. Fuji, called “Hoeizan yuhodo” (宝永山遊歩道) to visit a lava crater created by a Fuji eruption from The Edo era! If you are interested in this course, do not hesitate to consult the dedicated website here (in Japanese, let your browser translate the text for you).

The Shrines Dedicated to Mt.Fuji

The climb of Mount Fuji starts at the 5th station, where cars cannot go, people were leaving on foot from the shrines located around Mt. Fuji. These places are considered sacred and people would pray there for a safe journey. Six of the most important shrines dedicated to Fuji are located in Shizuoka Prefecture and registered on UNESCO as ‘Fujisan, sacred place and source of artistic inspiration’. They are still the starting points of the hiking trails leading to the 5th station. 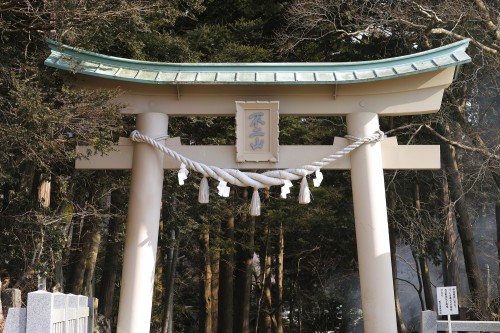 Note that there are hundred of shrines called “Sengen-jinja” across the country, all dedicated to the princess Konohanasakuya.

The Fuji Sengen-jinja shrine (also called “Fujisan Higashiguchi Hongu”) in Subashiriguchi is a UNESCO World Heritage Site that was the starting point of the Subashiri Trail, which can still be used today.

After going through the sacred door torii, we arrive in a large alley lined with centenary cedars. The day we went, they were burning leaves, the smoke brought something mystical to the place. 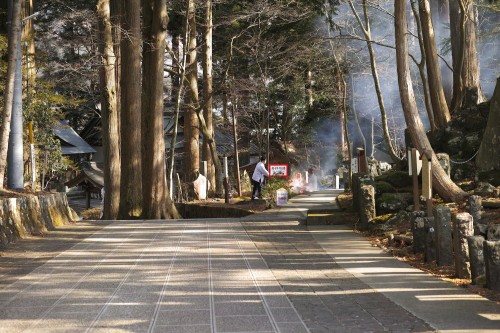 The main building of the shrine. 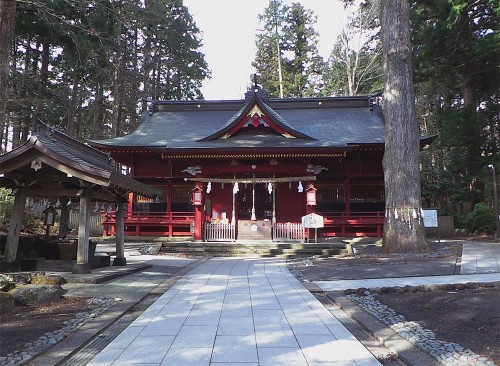 Another entrance lined with lanterns. 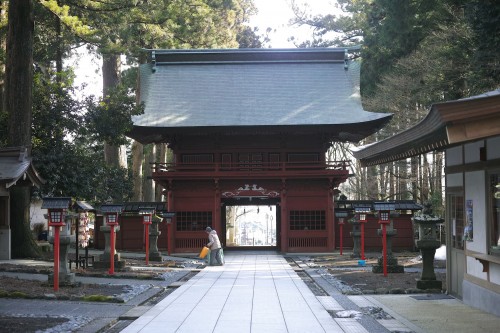 The beautiful temizuya 手水舎 (the water purification basin) of the shrine. 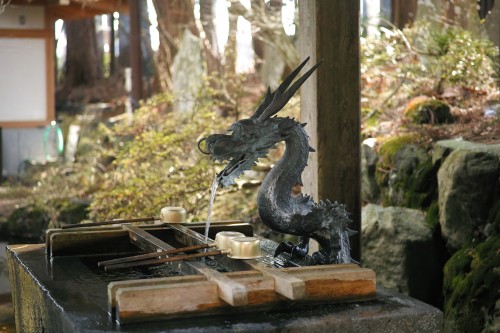 When you know the story of the shrine, you are not surprised to find ema (small wooden plaques on which Shintō worshippers write their prayers or wishes) that bear mount Fuji. 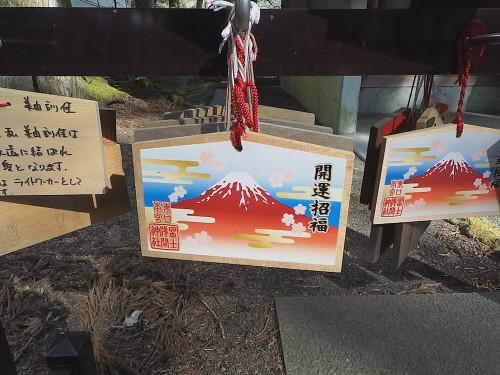 The Suyama Sengen-jinja shrine was the starting point of Suyama Trail, nowadays known as Gotenba Trail. 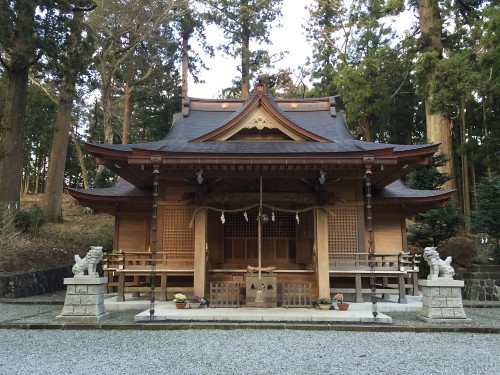 It seems that the shrine was built by Yamato Takeru, a Japanese legendary hero. What we are sure of is that it already existed around 1524. But it was partly destroyed in 1707, after an eruption of Mount Fuji so the present buildings date from 1823. One day a lord of the Takeda clan offered his sword, his armor and his horse to the shrine. Since then, the place has been a really important spot for people climbing Mount Fuji. Some people even still start their journey through the Gotenba Trail. 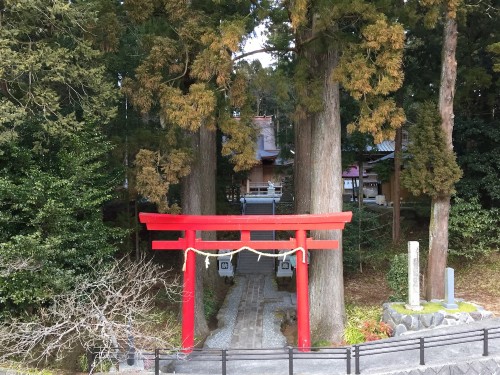 You enter the shrine by its vermilion torii facing the Yozawa River and you walk along an alley of 300 to 500 years old Japanese cedars. These immense trees give a special atmosphere to the place. 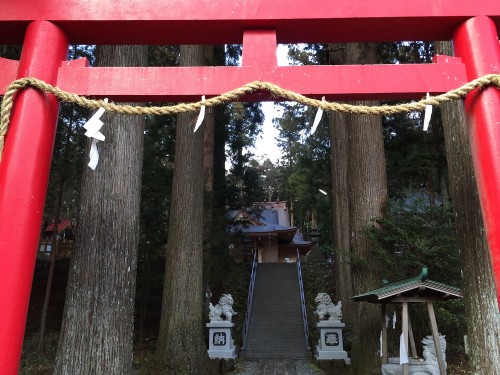 The temizuya and the main building of the shrine are decorated with cedar cuts representing the different events that marked its long history.

15/20 minutes by car from the shrines, in the town of Gotenba, you should also visit the impressive Komakado Kazaana Cave. Designated as a “National Natural Monument”, it is the oldest lava cave in the area. It was formed by a volcanic eruption from Mount Fuji 10,000 years ago. 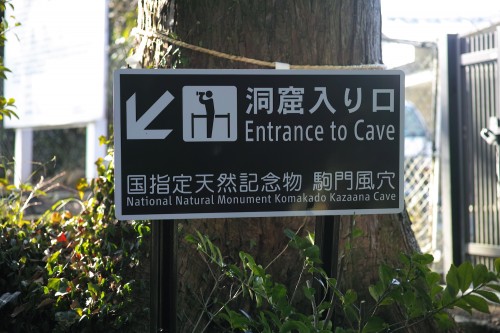 At the entrance, they give you a torch so you can admire the asperities of the cave, its stalactites and for the luckiest, its bats! The temperature of the cave remains the same whatever the season (around 13°C), which makes it an ideal place to visit in summer, when it is hot outside. 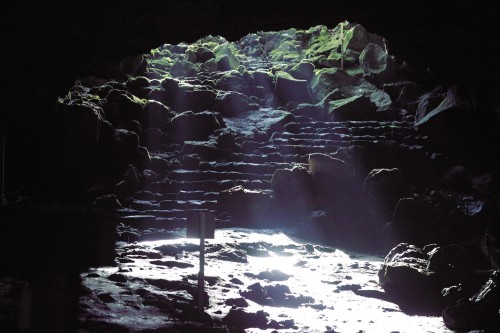 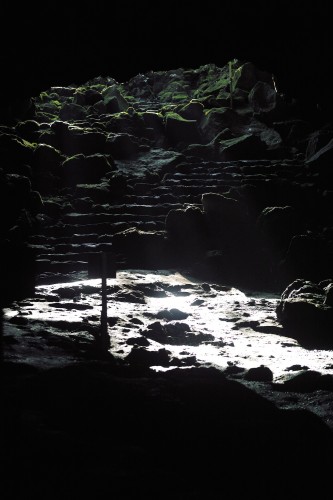 The cave is open every day from 9am to 5pm (4pm from December to February) and admission costs ¥200 (¥150 for students and ¥100 for children). If you are traveling by public transportation, it is a 20-minute walk from JR Fujioka Station (Gotenba Line). For those who come by car, a free parking is available.