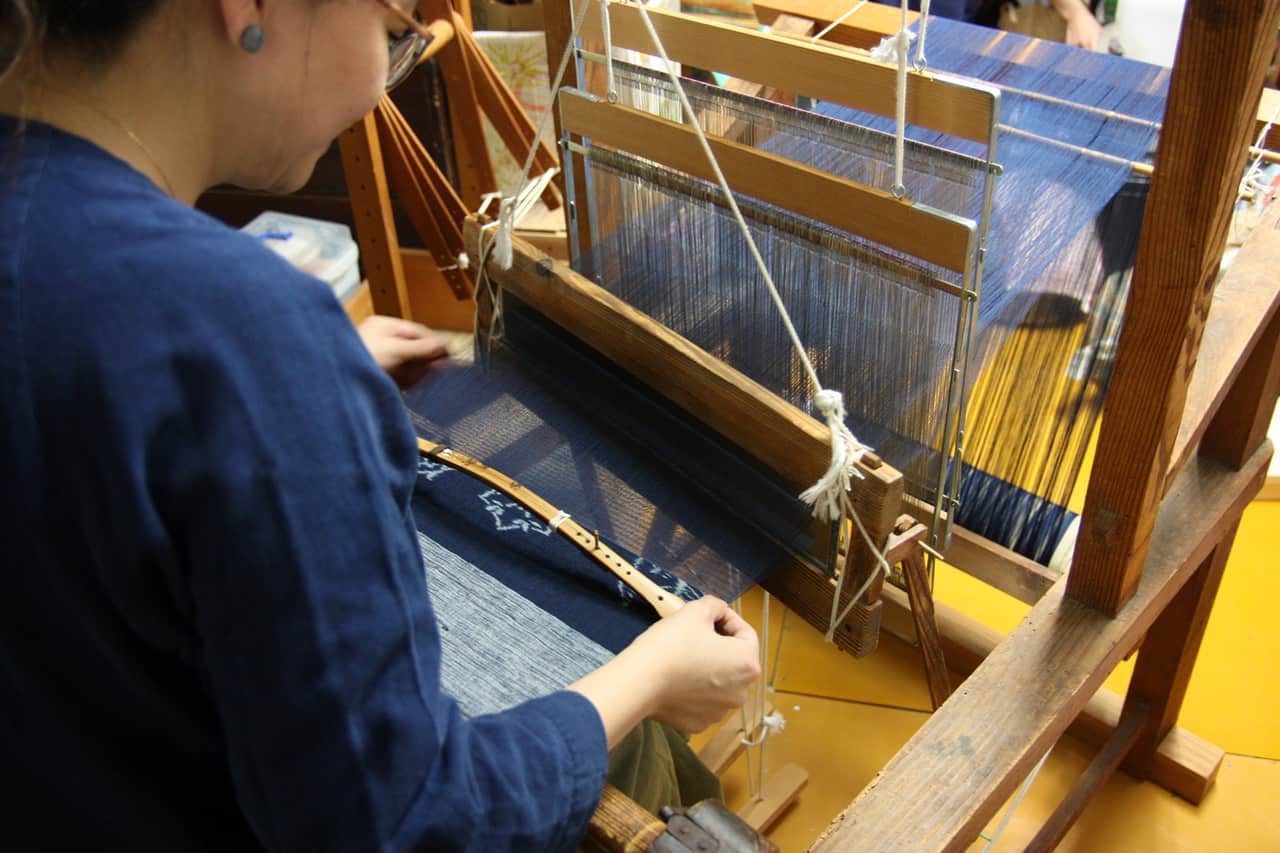 Each Japanese prefecture has its own traditions, culinary specialties, and crafts. Today, let’s head to Yonago, in the Tottori Prefecture, to meet a local artist and discover her unique craft: Yumihama-gasuri, a cotton fabric dyed with indigo and weaved by hand.

And let us begin by getting a closer look at the word Yumihama-gasuri, which may seem a little complex when first read, but which makes a lot of sense once deconstructed. Gasuri, or kasuri, simply refers to the name of a traditional Japanese weaving technique, and its prefix, Yumihama, is the peninsula in which it originated, at the western tip of Tottori Prefecture.

A weaving technique that relies on the creation of a white pattern on an indigo background, thanks to a meticulous dying process. Before even getting to the weaving part, you first have to dye your cotton thread after carefully covering the parts that will create the pattern, in order for those to remain white.

These beautiful weavings with geometrical patterns were originally handcrafted by women from an agricultural background, to produce robust clothes for their families with a touch of happiness. For more than 300 years, this traditional local craft, which was created for personal use, has been passed down from generation to generation until being designated today as a National Traditional Craft and an Important Intangible Cultural Property of the Tottori Prefecture.

Organic cotton plants at the foot of Mt Daisen

But before we head to Chiharu’s workshop, a young local artist, to experiment with these craft techniques, let’s start with the beginning: cotton picking.

We drove to Osamu and Tomiko’s local organic farm where Chiharu picks her cotton for Yumihama-gasuri crafting.

If we all know what cotton is, we mostly have an image of the manufactured product, in the shape of fabric or make-up remover pads. But it is actually quite rare to have seen what cotton looks like, growing on its plant in nature.

The cotton plants I was discovering there were not so high, similar in size to a bush. Very green-looking, you can quickly spot the small white balls hanging from the branches as you get closer. On each plant, you can see every step of cotton growth. Starting with a yellow flower, then evolving into a sort of green bud before taking its final shape as small white balls containing the cotton seeds. As I was invited to try picking one, I could feel the fluffy white ball detach from the branch very easily.

From raw cotton to the thread spool

Once in Chiharu’s workshop, a treasure trove worthy of Ali Baba filled with traditional tools, some of the artist’s creations, and a few grigris, we get started by working on the raw cotton by separating the fiber from the seeds.

A task that can sound pretty easy on paper but which actually proves a lot more tedious, with the seeds being all entangled within the fiber. Rather than doing this by hand, there is a tool to speed up the process. The mechanism is similar to the ones of machines used to press fresh pasta, with two rollers being held against each other and rolled thanks to a crank. Instead of fresh pasta though, we slide in between the two rollers a little bit of cotton.

The seeds being too big to go through the interstice, they pile up on one side of the rollers, while a seedless cotton fiber comes out on the other end. An operation that takes a couple of tries to succeed but that is quite easily reproduced.

Next step: untangling the cotton fiber to prepare it for spinning. Two techniques can be used here, with the help of two different tools. Chiharu first shows me two brushes, which look a lot like pet brushes. After placing a small amount of cotton on one of the two brushes, you then have to rub the second one against it with vigor to straighten the fiber.

And as I was slowly starting to get the hang of it, she then pulls out a second tool shaped like a bow and made of a curved piece of bamboo with a string stretched between both ends. Quite difficult to imagine how to straighten cotton with such an instrument! The trick is to place a bit of cotton around the string and to start pulling it to create vibrations that will untangle the cotton fibers as if by magic!

The last step before moving on to the weaving techniques: spinning the cotton. We now move to the spinning wheel (itoguruma in Japanese), an ancient tool shaped like a wheel that you might have heard of from the Sleeping Beauty tale…

A rather technical step that requires several months of practice before being mastered and that shows very tangibly how we go from raw material to the spool of thread that will then be weaved. Seated by the wheel, you have to grab a bit of thread already prepared on the tool and wrap it with the cotton fiber in your left hand while placing the right hand on the wheel handle. The idea is to then synchronize the spinning of the wheel to the stretching of the thread in the other hand, which picks up the cotton fiber during the process.

Of course, the thread would often break during my first attempt, but the sensation of having thread literally coming out of your hand is fascinating! It is a bit like watching a spider make its web.

An introduction to weaving

Before getting started with the weaving, Chiharu explains to me that between spinning and weaving normally comes the indigo dying part. A step that requires quite a lot of time and additional equipment and that she does not make in her workshop. She creates her designs and then usually gets the dying part done by other local craftsmen.

For the final step of Yumihama-gasuri making, we are now facing the impressive weaving loom which takes up much of the space in the workshop! There is one of the artist’s creations in progress on it, which helps realize what the cotton thread looks like once dyed and carefully aligned on the loom to create the desired pattern.

Chiharu sits down at her loom like a musician would at her piano, and then starts a meticulous demonstration of the very precise gestures to execute. Crossing the loom with the thread one way, checking the alignment of the pattern, pressing on one of the pedals, tightening the row that was just created, and starting all over again the other way.

She offers me to try my hands at it too, gently guiding me through it (fortunately for her, the rows of weaving can be undone if needed!). Even though it is not that easy remembering each of the steps involved in the making of this fabric and repeating them, the experience is as pleasant as it is interesting.

Pleasant to build something with your hands and see the fruit of this labor row after row, and interesting to discover all these craft tools and techniques that have not changed in centuries.

This inspiring introduction workshop to Yumihama-gasuri was ending with a beautiful sunset and a meal shared with the artist and some of her friends.

A lovely way to end this dive into Tottori Prefecture’s traditional crafts and to delay the moment I would have to leave this fascinating workshop.