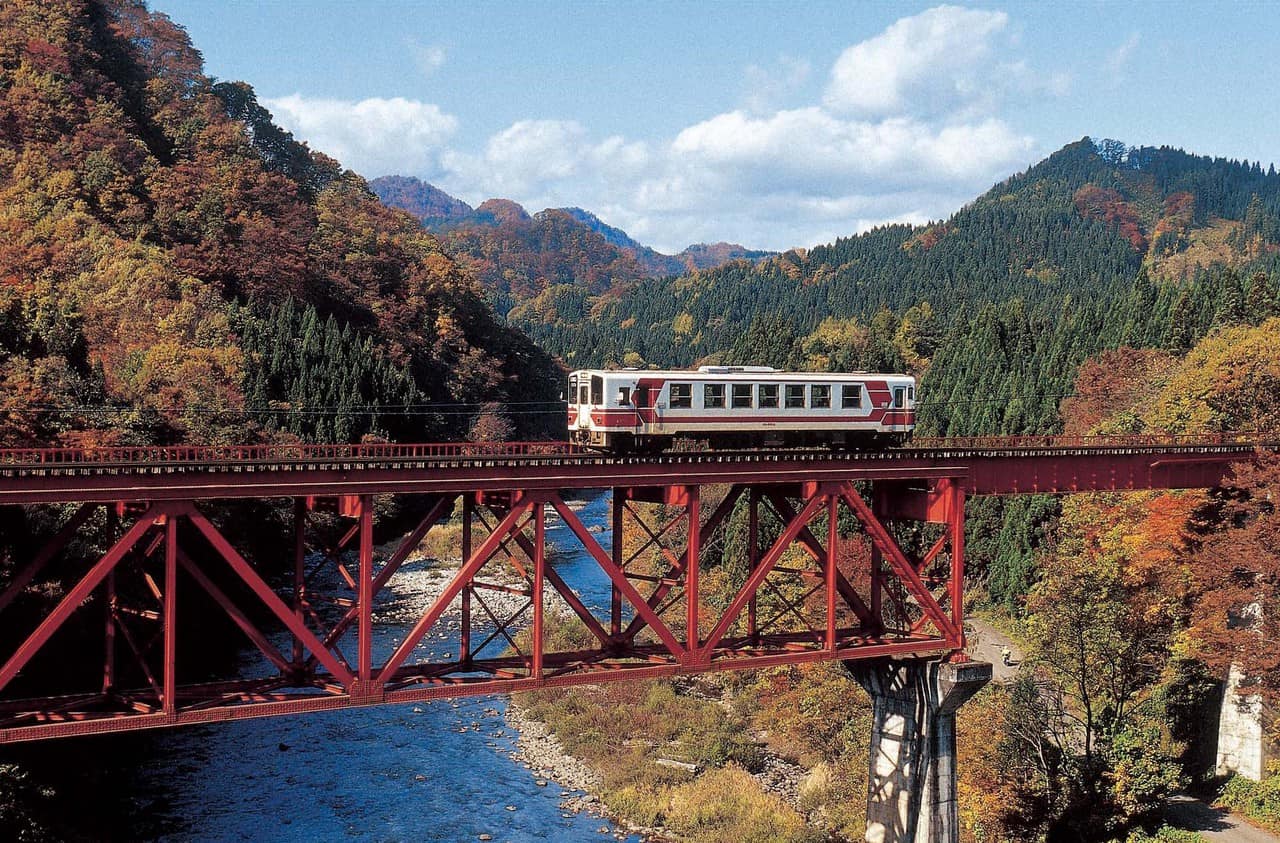 Riding the Rails on 2 Amazing Trains of Akita Prefecture

I have a little secret to spill. When my son was a toddler, we bought him a Tomy Plarail toy train set from Japan. He was too young to build it himself, so I designed a track for him and let him run the train on it. Of course, the secret is that I probably enjoyed playing with the train more than he did and on every trip we would make to Japan, I’d buy a few more pieces to design more and more elaborate tracks.

It isn’t really a secret that many people in the world love trains and Japan is a sort of train lover’s paradise. There are so many variations of this mode of transportation: fast and slow, old and modern. There is even ekiben, an entire cuisine built around train travel.

On a recent trip to the Semboku city area of Akita Prefecture, I had the opportunity to ride two iconic trains, both very different, but unique in their own ways. 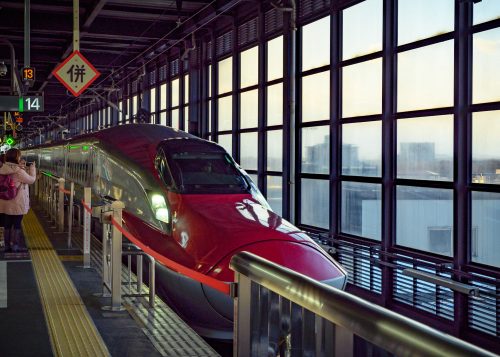 With its bright red decor and sleek profile, you might think this train would be called “Crimson Lightning”, but the actual name is Komachi, which is the name of a famous poetess from Akita and is also a shared moniker with Akita’s famous brand of rice. Although neither poets nor rice evoke feelings of speed, the modern Komachi can reach 320 km per hour (200 miles per hour), making the trip from Tokyo to Semboku in just under 3 hours. 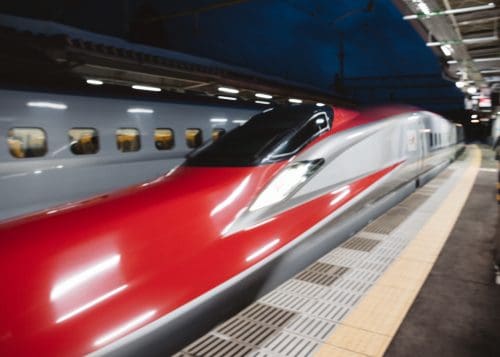 There is a catch, however. The Akita Shinkansen line was converted from standard tracks that still have road and pedestrian crossings, like normal passenger trains. For safety reasons, the speed of the train between Morioka station in Iwate and Akita city is limited to 130 km per hour (80 miles per hour). And of course, that is fine because the slightly lower speeds let you take in more of Akita’s breathtaking scenery. 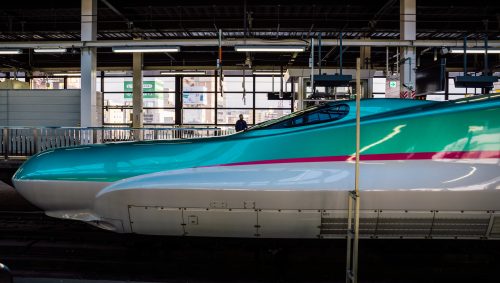 With lots of leg room, reclining seats and a personal electrical outlet, the 3 hour trip to Semboku on the Komachi is both comfortable and convenient for travelers. 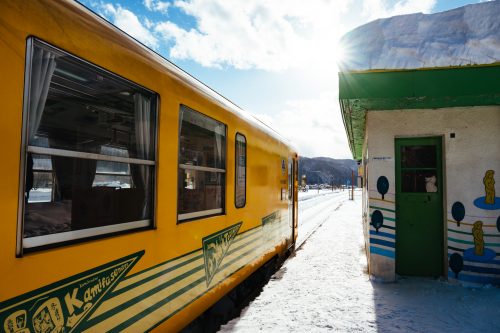 If you take the Komachi Shinkansen to Kakunodate station in Akita, you can transfer directly to the Akita Nairiku line where you might experience train-related culture shock. The Nairiku line is a one or two car, mostly single track line that winds leisurely through Akita’s satoyama, the area between the foothills of the mountains and the abundant rice producing farmland. Along the way to its terminus at Takanosu, depending on the season, the Nairiku line crosses beautiful bridges over wild rivers, endless fields of rice, and forests of gorgeous Autumn colors. 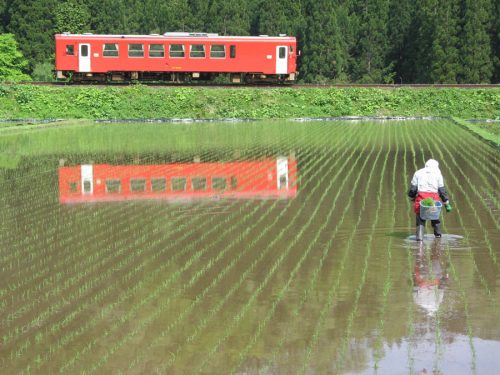 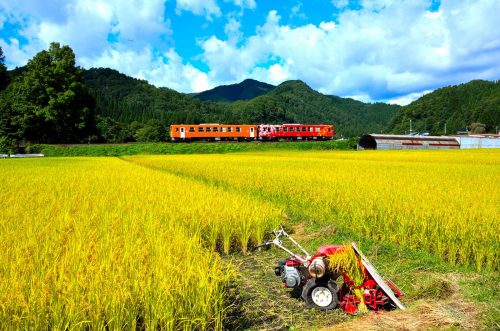 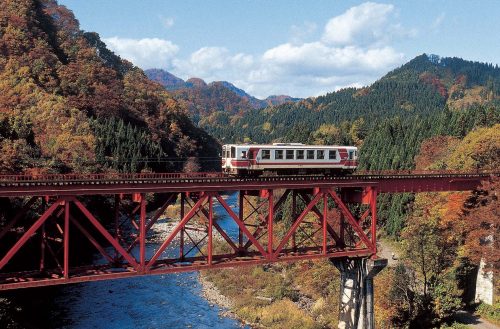 Of course, this was Winter, and the day I rode the Nairiku, we traversed a huge plain of snow flanked with snow covered mountains. The skies were blue and brilliant and the contrast of blue skies and white snow was captivating to me and the train full of Taiwanese tourists I was with. 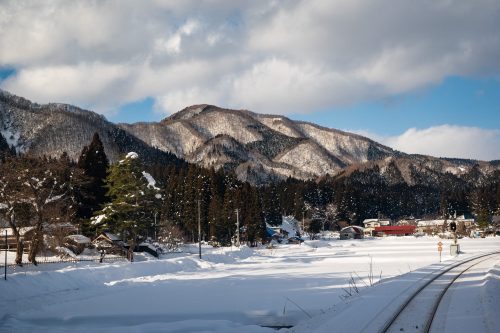 The particular train I was riding was called the “Dog Train” for the Akita breed dog-related interior decor. Images of Akita puppies decorated the walls of the train and even the cloth upholstery on the seats had a dog motif (with an occasional bear thrown in, don’t ask me why). 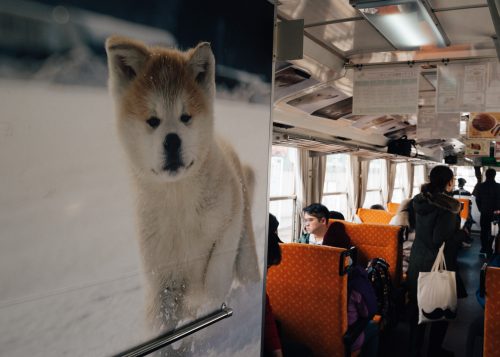 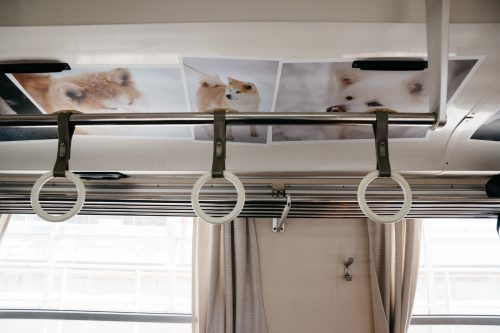 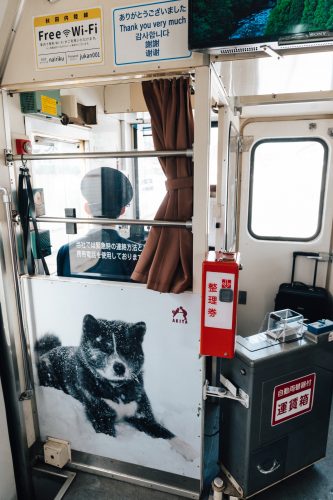 The rail company refers to the Nairiku line as the “Smile Rail” and it isn’t difficult to see why. The whole experience, from the nostalgic feel of the train to the cute puppy decor to the breathtaking views outside make it impossible to ride without breaking into a smile. 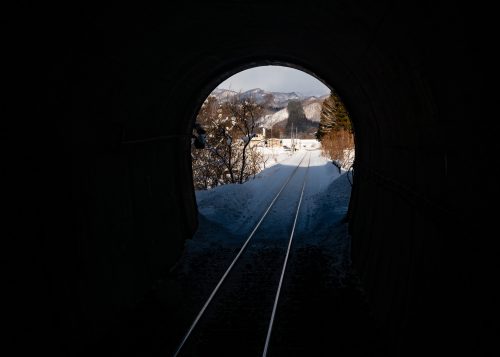 The majority of the line runs on a single track, which means occasionally a train will stop and wait at a station for another train to pass from the opposite direction. This waiting is simply part of the charm of the rail, where the ride itself is the destination. 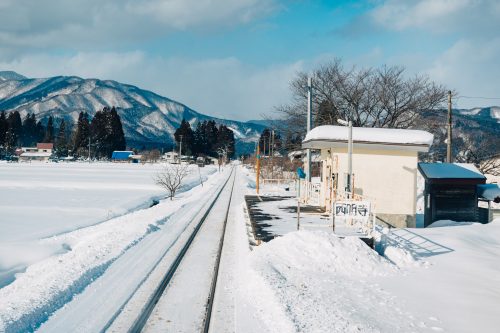 Though there is over 90 km of track on the Nairiku line, I was only able to ride a few stops before alighting to take a drive around Lake Tazawa. At the stop I got off at, someone had sculpted a local version of the Hachiko statue from the fresh snow. Yet another reason to smile on the “Smile Rail”. 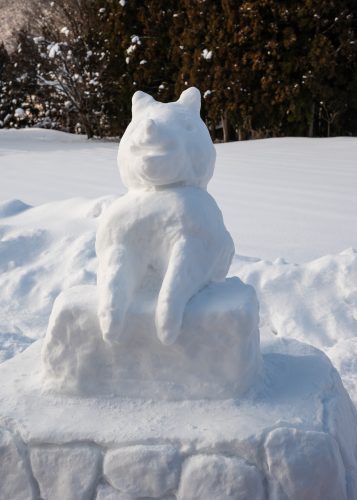 Getting to the Nairiku Line Railway

The best part is that you get a two-for-one by first riding the Komachi Shinkansen from Tokyo Station to Kakunodate, a ride which takes a little over 3 hours. If you have a JR Pass, you can use it for this portion of the trip which is the most expensive leg.

At Kakunodate Station, simply transfer over to the Nairiku Line, which has a limited number of trains running, sometimes only one per hour. There are many stops on the way to Takanosu and depending on the season, you may want to get off and sightsee around various stations. Besides the beautiful snow covered Winter scenery, see the nationally famous cherry blossoms of Kakunodate in the Spring, the rice field artwork in the Summer, and the mountains filled with fall colors in Autumn.