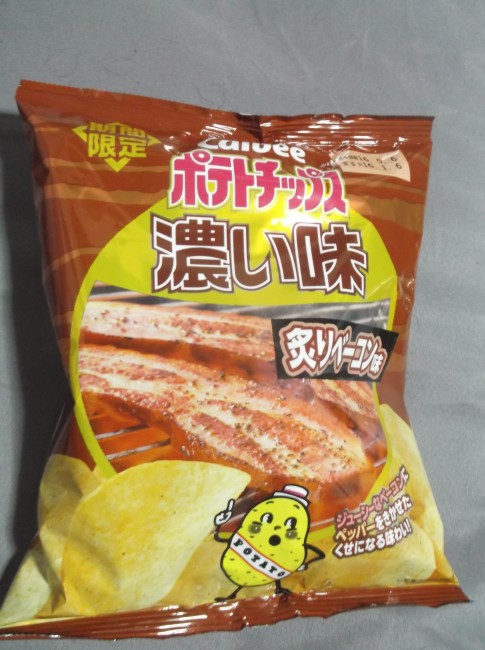 A chip out of Japan

Chips in Japan have so many varieties it’s almost uncountable.  This is partly due to the fact that Japan has so many varying flavours of chips, let alone different types of snack.

I hadn’t eaten chips/crisps regularly for a long time until coming to Japan, and now I practically can’t stop. Like pretty much all Japanese food, the flavours are seasonal, which means that there are some limited-time flavours.  That’s a smart move, as I am certain I am not the only one lured into unique limited edition items. This winter I have been introduced to quite a few great flavours.  Let’s take a look at them. 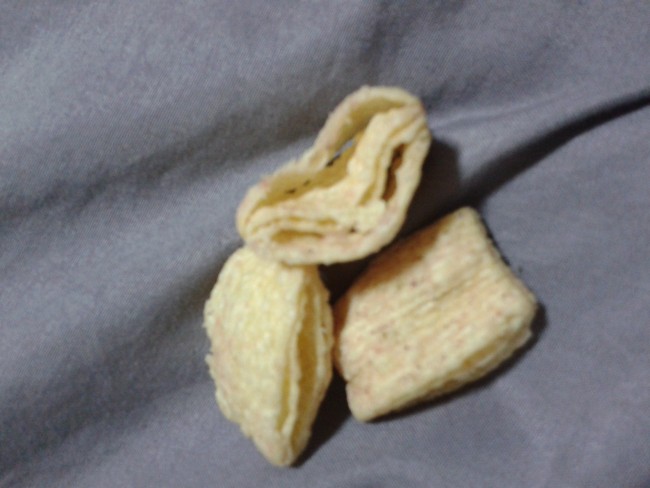 After some research I have discovered that these are not seasonal, but I did not notice them until winter.  I haven’t stopped eating them since. My first impression of the pack was perhaps that it is Cheese and Honey flavoured, until I noticed the word “バター” read “BuTah.” The pack also indicates two other main flavours: parsley and mascarpone. These are all quite subtle flavours; flavours that I may not have pictured to match together.  Perhaps that’s mainly because the butter seems to be the focus. Needless to say, I had to buy these.

Opening them I was surprised to find that they have quite a cheesy smell. I thought perhaps I had somehow misread “バター” and it was secret cheese flavour. Now I think perhaps the salt of the butter mixed with both the cream of the mascarpone and the sweetness of the honey to give that smell.

The taste is over-all very smooth with a slight tang. I couldn’t say if it tasted just like honey, butter, parsley, and mascarpone, as this is the only case in my memory that I have had the flavour combination. These ingredients are rather expensive in Japan, which makes me wonder if this is considered a “fancy” chip. Research into the flavour has revealed to me the South Korean “Honey-Butter Craze:” a trend so popular that stores had to put up signs to warn customers that they were out of stock, and that 60 g bags were being sold at around $50. I think it was serendipitous that I found my first bag in Japan. While I do love the flavour, I’m happy with the standard Japanese price.

These chips are best enjoyed as soon as you get them, as it would seem that they’re being bought quicker than Calbee can make them. Perhaps it’s time for me to open an eBay account, and reap my millions from the craze…

So these probably aren’t “Smoky Bacon” flavour, but they certainly are something bacon. I researched the flavour, and Calbee says that they are “dark taste broiled bacon” so as an Englishman, this translates to my world of snacks as “Smoky Bacon”. The pack depicts a couple of thick slices of bacon upon a grill above some fire; a classic scene. Like many Calbee chips, the little potato man bashfully points to the image as if to say “You caught me unaware, I was just about to eat this big piece of bacon”. The top of the pack has what I can only describe to be “Bacon Stripes”, which is something I feel we’re all beginning to recognise as a symbol of taste as bacon continues to be a classic favourite.

Inside I am met with the familiar bacon-crisps smell, but like all Japanese chips, the flavour itself is more delicate. This might sound bad for snack-food, but it really is good. The taste doesn’t become boring or too salty despite the generous sizes of the bags. These chips taste quite sweet, and there is a distinct difference between these and what you might find in the UK.  Yet, I can’t quite put my finger on what. Maybe this could be due to the fact that bacon does not seem to have a universal form, despite its popularity; telling a Japanese person that I miss having bacon, they told me that it is easy to find, and described it to me in a combini. Even though these chips may not represent the bacon I know, they really are quite more-ish. 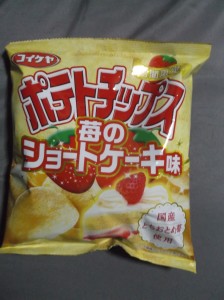 Yes, Strawberry Cake-flavoured crisps. The packet depicts a nice looking sponge cake: complete with cream and a plump strawberry, floating over some crisps. Just above this, there are two giant cartoon strawberries. Without any hesitation I had to have these; deep down, my heart told me I always needed this flavour, I just didn’t know it for sure until I saw the packet on the shelf. Japan is quite famous for bizarre flavours, but I think it is actually quite rare to find something strange. So, getting this kind of flavour is quite a “Twilight-Zone” feeling. I am lead to believe that this strawberry cake is the Japanese take on a Christmas cake, and that that’s why it is being sold as a winter flavour.

The bag is large, as are the chips inside.  That’s always a nice surprise, especially in Japan, where you might picture everything to be on the “petite” side. The crisps are quite sweet, and surprisingly tart, but that is toned down by the buttery cake taste. As you can imagine, the combination of potato and strawberry isn’t exactly champion, but everything else about the chip is great.  It’s almost like eating a strawberry granola bar, or perhaps strawberry shortcake.

This chip is best served as a cheap alternative to a fancy dessert at a restaurant. If you offer your partner to skip on the dessert and go straight home to open up a bag of these, I’m sure the evening would be perfect. 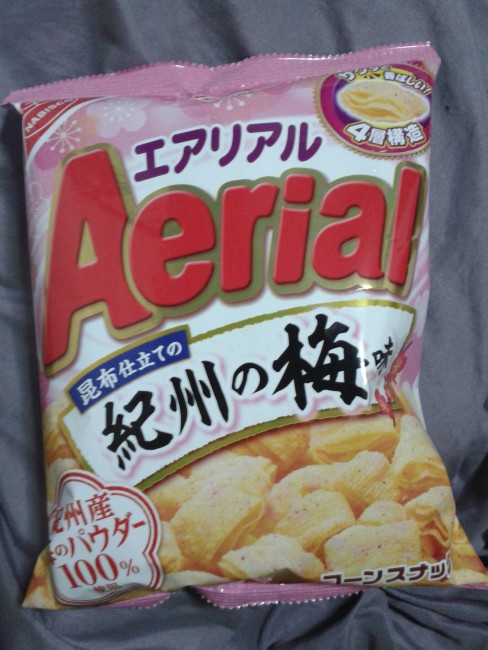 You likely know about Sakura blossom, but just as beautiful is the plum blossom. The two are very similar in appearance with plum being just slightly more purple. Because of this it is very easy to confuse the two, which is exactly what I did when I first bought these. The pack is adorned with blossoms, and the main colour is pink. Aerial seems to boast that the snack has four layers, as this is illustrated both front and back of the pack. The main image if of a bed of the corn chips, sprinkled with pink blossom. To be honest, there is nothing really too special about any of this, other than knowing that this is a truly Japanese taste.

Opening the pack it became clear that these weren’t Sakura flavoured when the familiar fragrant smell of umeboshi (dried plum) came forth. Personally, I love umeboshi in all its forms –from honey-sweetened to the really strong, sour ones- but I know that this isn’t the best taste for a lot of people. I must say that if you are going to risk buying blossom-flavoured snacks in Japan: be prepared for it to not be light-tasting Sakura, and rather the heady powerful taste of plum.

These crisps capture the fragrant tang of umeboshi on a subtle enough note that it isn’t a challenge to see if you can eat them. Rather, they are met with the naturally sweet taste corn has. Aerial tend to be quite a sweet snack, almost like a breakfast cereal. However, these pungent chips are definitely a late evening snack.

I think most people like these as a bar snack. Beer and tangy chips: classic. 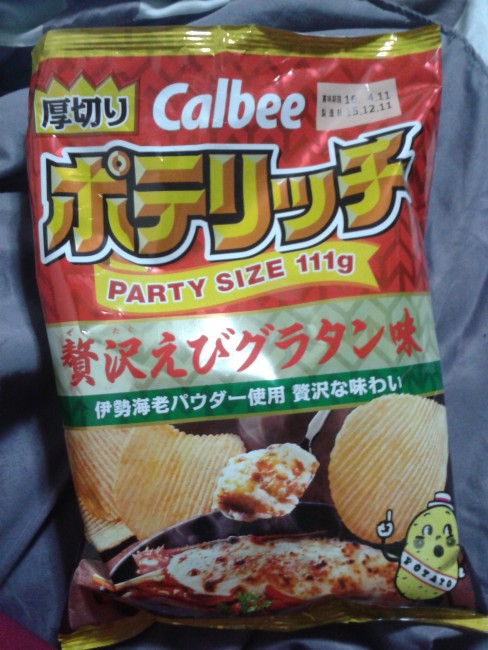 These may be my favourite. Always glad to see the pack says “Party Size 111g.” In my mind it doesn’t quite warrant a party, but it is still a generous portion. The picture of the lobster on the front makes this look fairly fancy, but at the same time really homely and comforting, which is really nice. I think that’s a hard thing to balance, but hearty lobster is certainly the flavour to pull it off. The pack also shows that the crisps are crinkle-cut. Crinkle-cut is something I don’t fully understand, but a lot of people go on the notion that the grooves hold more flavour. As I’ve said many times, Japanese chips tend to be flavoured more lightly than what I am used to as a Brit, so more flavour wouldn’t go amiss.

So, the 111g is rather hefty, and the chips are quite big. Personally, it still feels like just the right amount for one person. I can’t help but feel that these ones are a little more greasy than other chips, but I can’t be entirely sure.  If they are it makes sense, as the flavour is a very buttery lobster taste.

They managed to get the delicate tones of shell-fish to a T, which is great. As much as I like prawn crackers and other such chips, I can’t help but feel that the taste of a prawn cracker is not what prawn tastes like. Fish is natural quite a subdued taste. Perhaps that’s the reason why these are always ridged crisps; more of a subtle flavour can only be a benefit. If you’ve ever had buttery lobster, then you know exactly how these crisps taste. If you’ve never had the pleasure, then it’s just become more affordable.

These are perfect for dipping into when watching TV. Or maybe you can set up a chip-dinner: plum blossom starter, lobster for the main, and the nice romantic strawberry cake for dessert; beautiful.