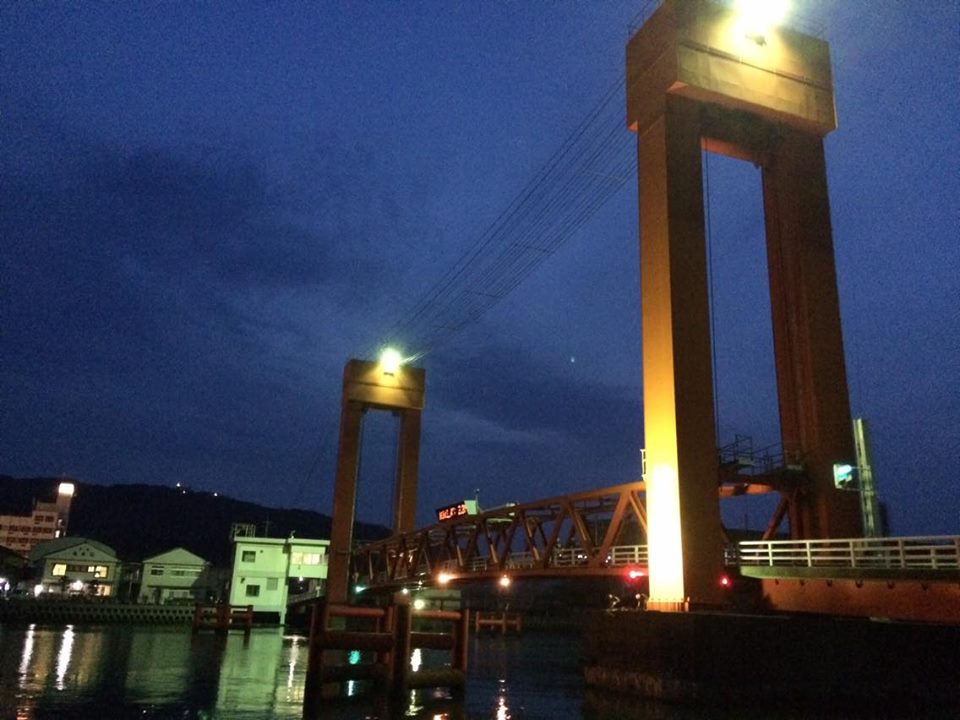 Kumamoto prefecture’s Amakusa islands extend far from Kumamoto city, over an old traveling road’s five bridges and tucked into a small cove. Traveled by foot, the city will fling you into the hills. Saddled and slung atop these lookout points are hillside parks with imagery of a Christian religious past unique to these Kumamoto islands. Equally as spiritual is easing the haunches of a day hike down into the evening’s quiet cove. In a somnambulant amble, a short ways away from the finest of Internet cafes, rests the quiet Kumamoto Hondo Seto Strait pedestrian bridge. 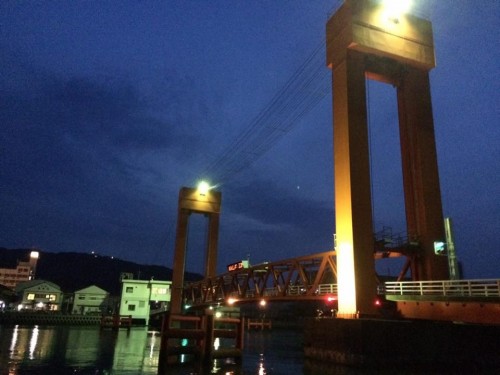 The bridge is colored a Shinto shrine’s spiritual color, a proper color. It serves as a gateway into Ueshima, the eastern island of Amakusa’s two main islands nearer Kumamoto city. During the evening, it carries the tired, friendly voices of students returning home from a nearby school. Cranes swoop quietly when no students disrupt the waters’ still with their babble.

The Amakusa islands siphon strait waters which mirrored a puffy-eyed twilight when we visited. Its central span not lifted, the bridge yet plays its digits in a slow caress over the water. The shrine orange matches sweetly with the purplish waters, like a ripe fruit’s flesh. The molar frames inside the watery mouth below gape at the bridge’s tantalizing geometric form. 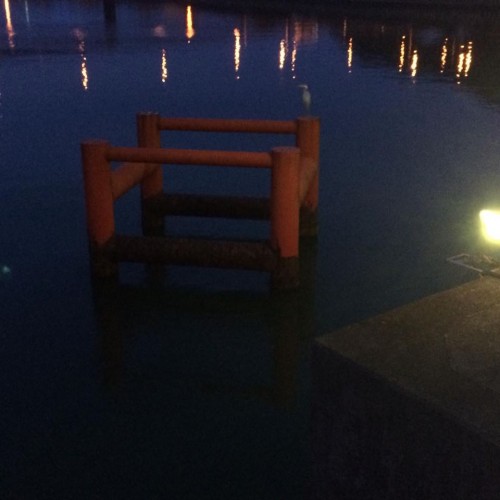 A truss bridge just over the water, the design seems intended to keep the high towers from toppling in a tempest striking between the islands. The four orange structures below are like Shinto tori gates reconfigured as buffers against unruly waters. The structural soundness seems a subliminal message directed at students attending the nearby vocational school, settling into the idle thoughts of future engineers.

Amakusa Hondo Seto Strait Bridge is also crosshatched with triangles. The truss framework starts the geometry. Lit from overhead and beneath, there is tremendous shadow play of forms on the Amakusa bridge. Light caught against beams tears the bolted frame into slivers of light and dark. Markings of light lay in nightly imposition upon the clearly marked passageway, triangles in quartered squares overlaid by shades. The pathway’s green splits into night and day shades itself, the daytime difference between these Kumamoto islands and their waters. 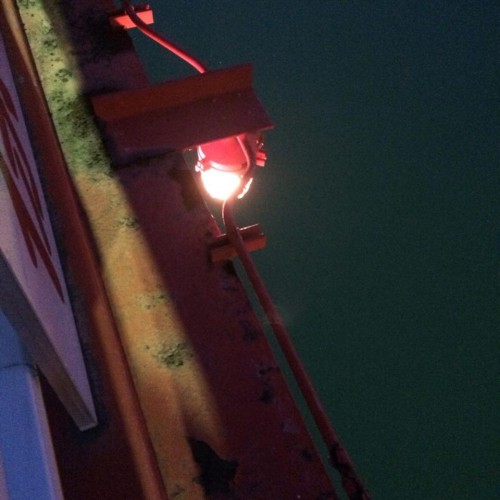 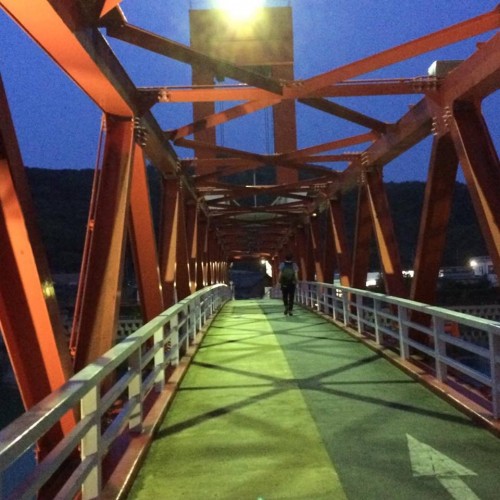 Although low to the Hondo Seto strait, the bridge elevates for ships passing between the Amakusa islands. A night time visit allows no sightings, and only reflected light from a nearby automobile bridge float over the water. Said crossing is one of the lofty Pearl Road bridges between Amakusa islands and Kumamoto. It’s darkness holds no candle to the night time grace of the Hondo Seto strait pedestrian bridge.

From Nagasaki, take the JR Nagasaki line until Isahaya. Take either the limited express at 15 minutes and 1000 yen, or local train at 460 yen, taking 30 minutes.

From Isahaya, take a train to Shimabara. Take the Shimabara railway from Isahaya until Shimabara at 70 minutes, taking 1430 yen.

From Kuchinotsu port, take the Amakusa ferry for the Amakusa islands. The one-way ride is 380 yen, taking 30 minutes.

From Amakusa port, take a bus until Hondo. This costs just over 500 yen, taking 30 minutes.

From Hondo, the Hondo Seto Strait Pedestrian Bridge is a 20 minute walk south.