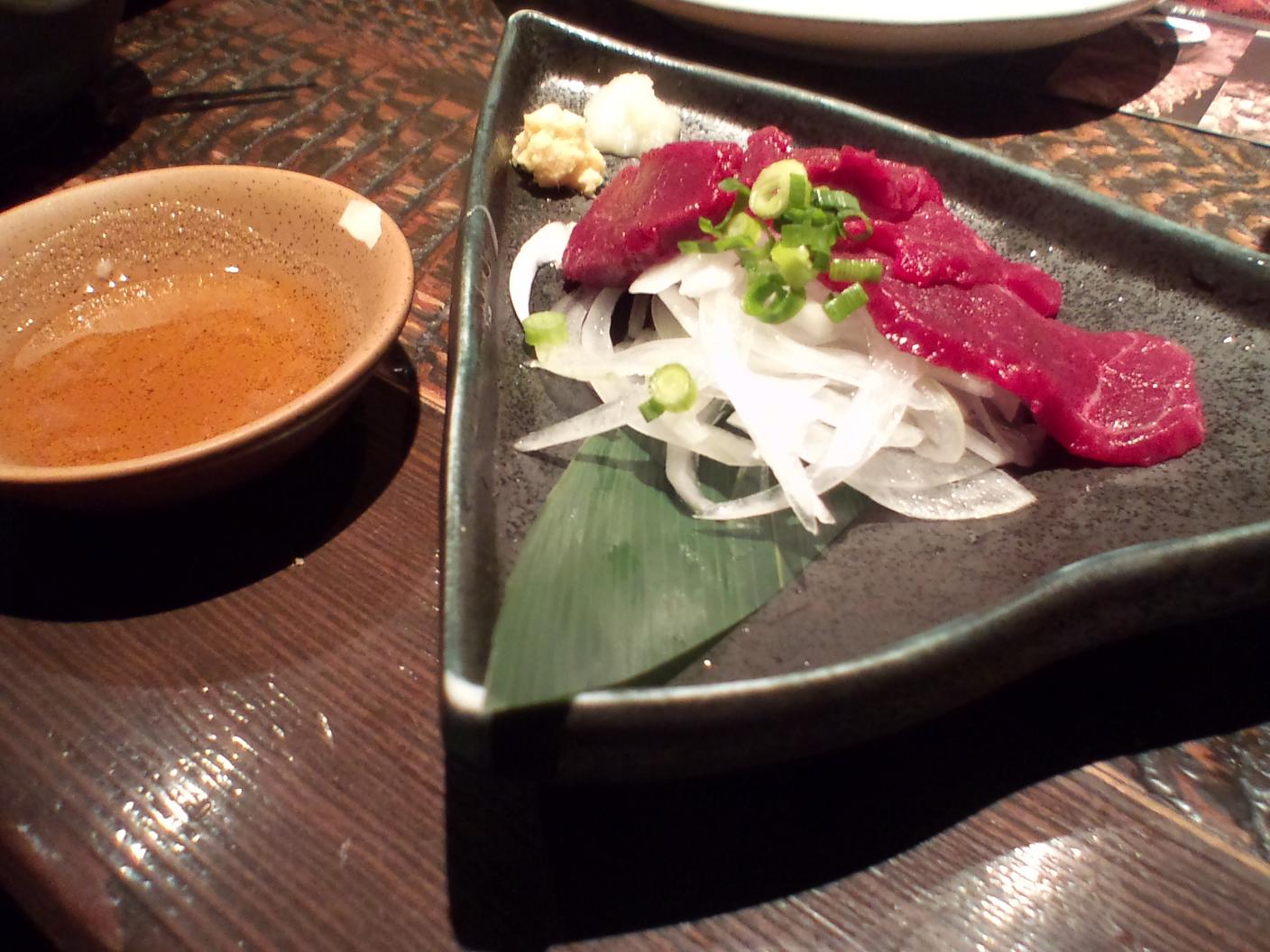 Be adventurous and try some Horse Sashimi

Kyushu island has a huge variety of local specialities when it come to food, but perhaps you are searching for something unique. Something exotic you can brag to your friends and family about that you ate when you went to Japan. So why not try something unique that Kyushu is famous for?

Horse sashimi  (刺身) is thinly sliced, raw horse meat. Also known as basashi (馬刺し) or sakura niku (桜肉) – which translates to cherry meat (because of its pink colour) – it is considered a delicacy in Japan as local Japanese people don’t eat it regularly.  As a Kyushu specialty, it is not a meat you’ll find on the shelf of a convenience store, nor something I have seen that is mass-marketed at a fast-food restaurant (try our new horse burger!), and is rarely mentioned in Japanese tourism material. In fact, based on my interactions with other visitors to Japan from around the world, most were surprised that horse meat was even served in Japan. In fact, I was taken aback when I first heard horse meat was served in Kyushu; I had associated it with Belgium (paardenrookvlees) and Italy (pastissada) as I lived in both of those places.

I know you are probably thinking “There is no way am I eating raw red meat,” but hear me out. It’s not going to make you sick or give you food poisoning. Free yourself from the Western mindset that eating raw meat equals a trip to the ER with E. Coli. In fact, horse is one of many foods regularly eaten raw in Japan along with fish and chicken, and food-borne illness associated with uncooked meat is extremely rare in Japan. Even if you can’t be convinced to eat raw horse, at least try it cooked as a dish called baniku (馬肉). The texture is a little different from sashimi (it felt a little on the stringy side) and if you didn’t know it was horse you might not notice. I thought the grilled version of horse was similar to a mild version of venison, but your palate may differ. Simple, yet delicious.

I admit I am no award-winning food critic though I am a bit picky about what I eat. I will try anything once, however. so after getting over the whole “I am going to eat Black Beauty or Mister Ed” feeling I was ready to order. Be sure to ask if you can get the sashimi sliced thin, as the thicker the cut, the chewier it will be. The price was about 500 yen (about $4.00 USD) for the portion size seen in the photo above. If you like alcohol, I also recommend getting a side of sake to complement it. I prefer my sake warm when eating horse sashimi, but I won’t hold it against you if you don’t.

After receiving the plate and looking it over for a moment, I took a deep breath and took my first bite. I was pleasantly surprised as there was no aftertaste, nor did I feel I had to quickly slug down alcohol to counteract the taste. I felt it was not as gamey as I assumed it would be. It also was soft and not tough like some cuts of beef. I felt the sauce (a ginger soy-based sauce) enhanced the flavour of the meat, but I don’t think it was necessary to enjoy the horse sashimi. I won’t try to say the Kyushu dish ranks up there with Kobe beef, but it’s worth the 500 yen and the experience. It’s not something I would eat daily but more along the lines of something I would order when feeling a little adventurous.

Have you tried horse sashimi? If so, feel free to post your opinion and restaurant recommendation(s) in the comments below. Horse sashimi is a local speciality in Kumamoto Prefecture on the southern island of Kyushu.