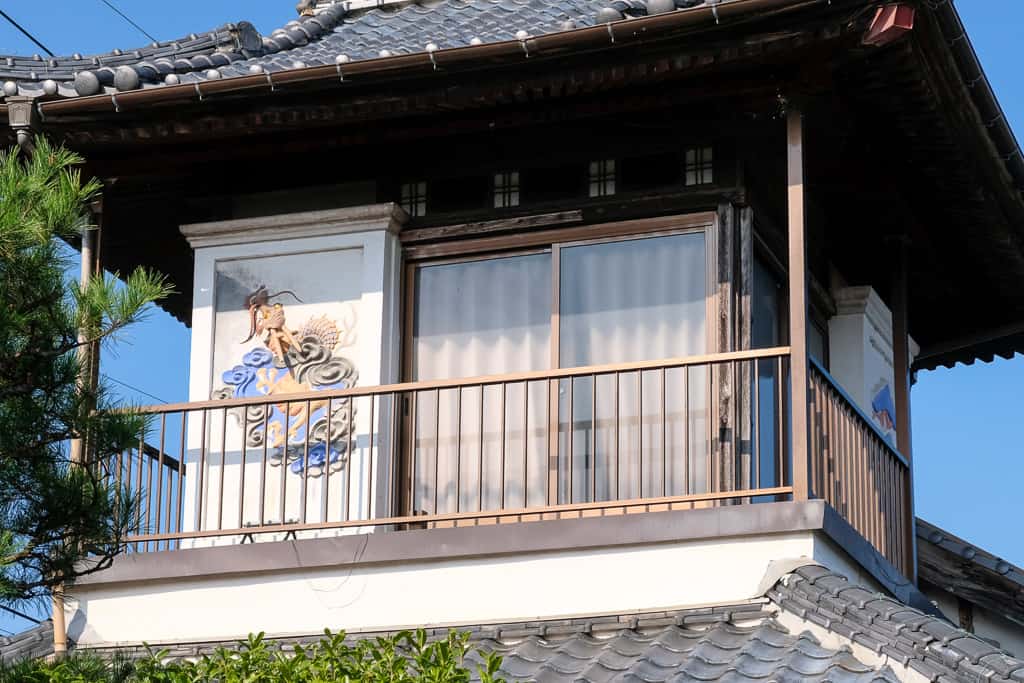 The Architectural History of Kote-e Reliefs in Ajimu, Oita

When I think of the onsen rich prefecture of Oita, three distinctive features come to mind: I think of the coastal cities of Beppu and Oita. I think of the velvet greenery of rolling landscapes. And I also think about the wonderful historical treasures scattered throughout the countryside. So, it didn’t come as a surprise when I found out that in the heart of wine country of Ajimu, was one of the largest collections of Kote-e plaster reliefs in all of Japan.

Crafted using a deft hand of trowel and plaster used to cover exterior walls of buildings, Kote-e (鏝絵) rose in prominence during the 19th and 20th century. Adorning the walls and eaves of residences and storehouses, auspicious characters were often chosen to ward off evil spirits and invite good fortune. A high number of plasterers developed their craft during the Meiji Era, including locally born Nagano Tetsuzou (長野鐵蔵). Today, about 70 Kote-e still remain intact in Ajimu, with some of Tetsuzou’s original work amongst them.

Largest Collection of Kote-e in Japan

To the north of Ajimu is the famous Usa Jingū. Whether you believe in the divine protection of Usa Jingū or not, most of Northern Oita came out relatively unscathed by the bombings of WW2, effectively preserving one of the richest collections of Kote-e in all of Japan. With the reliefs found in the neighbouring cities of Kitsuki and Hiji, Ajimu is less traversed by tourists even though it boasts just as impressive of a collection. As I walked leisurely down Kote-e dori, I received a personal introduction to the 150-year-old craft from a local guide.

I met my guide, Hiraki-san, at the Ajimu tourist centre, and climbed into her tiny, two-seater truck to ride 3 minutes to Kote-e dori, where the highest concentration of the reliefs in Ajimu are found.

As I stepped into the quiet street of Kote-e dori, the first thing I spotted was the biggest kote-e of them all: a giant, blue mountain. Initially, I believed it was the profile of Mt. Fuji, but my guide informed me that it is a view of the three-peaked mountain of Yufudake in Yufuin.

With the ferocity of the lion to keep evil spirits at bay, and the dragon to invite the bounties of wealth, the Kote-e symbolized a household’s ability to commission such pieces. As displays of wealth and prosperity, they also acted as house emblems.

After years of weathering, only the yellow and blue dyed plasters have stood the test of time, though to me, the designs still remain relevant in the modern age even with only these two colors.

Here in Ajimu, old reliefs stand side-by-side with new designs created in the past few years. While the number of artists specializing in the craft dwindle in other places of Japan, Ajimu has managed to maintain the art form by introducing Kote-e programs into their schools, and continuing to support existing artists in the area.

Along with a few other artists, local Eto Satoko（江藤智子）continues to work in the area and I view examples of her work.

As techniques evolved, so have the array of colors available to use. When once only the vibrant yellow and blue dyes stood the test of time, modern examples use new, weather tolerant plasters. However, some newer reliefs have opted out of color completely and allow the design to speak for itself.

As my tour of Kote-e dori comes to a close, we return to the tourism center. However, the tourism staff invited me to one last Kote-e hotspot in the hills of Ajimu.

For a Kote-e guide, make a call to the Ajimu tourist centre at least a day in advance to arrange a tour. The guide only speaks Japanese. You can pick up the Kote-e street map at the tourist centre, or download it here: http://www.usa-kanko.jp/documents/honmachi.pdf

There’s also a greater Usa map that lists Kote-e art throughout the city, which might be worth it just for the natural sightseeing you’ll get along the way.

How to Get to Ajimu

I’d recommend traveling by car, as there are limited buses going to and from Ajimu. If you’re keen to travel without a car, you can catch the Sonic express train from Oita station in under 50 minutes, or Hakata station in a little over an hour and a half to Usa Station. There will be several taxis available at the station to make the final trip.

If you’re in Ajimu, a 6 minute drive from Kote-e dori will bring you to Ajimu Winery, where you can get a taste of some of Ajimu’s award-winning sparkling wines. If you happen to be here in September, I recommend the grape picking available at Ajimu Grape Farm, where I’ve tried grapes that taste like no other grapes in the world. I’d be remiss not to suggest a visit to the famous Usa Jingū in Usa City. Believed to be one of the earliest examples of the union of Shinto and Buddhism within one structure, Usa Jingū sits within an expansive garden that will calm any soul.