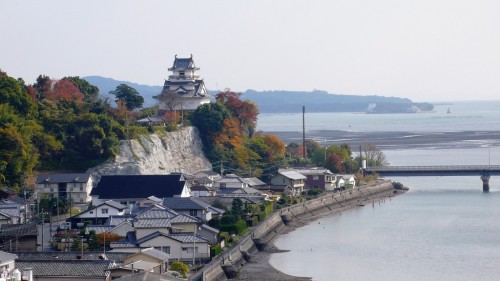 Oita Prefecture on Kyushu Island is known for its hot springs. But several cities in the region are also worth visiting if you have a little more time after getting some fresh water in the local onsen such as Beppu or Yufuin. Thus the small town of Kitsuki (杵築) on the Kunisaki Peninsula which is located only 25 kilometers from Beppu, offers a pleasant historical atmosphere.

In addition to the well-preserved quarter of samurai houses, one can visit Kitsuki Castle (杵 築城 – Kitsuki-jô), the smallest castle in Japan, which stands at the top of a thirty-meter plateau overlooking Morie Bay.

Like many Japanese strongholds, it has suffered many vicissitudes throughout its history. It was first founded in 1394 by the lord (or 大名, daimyô) Kitsuki Yorinao. One of the nicknames for this castle is “the castle of the cow on the stomach” because its shape and location in the surrounding landscape would evoke the silhouette of a cow lying on its stomach. It is also called Katsuyamajô, “the castle of victory”, in memory of a failed siege fomented by an enemy clan.

The Kitsuki clan then reigned here for fourteen generations until the end of the sixteenth century, before the castle changed hands several times.

In 1596-1597, the main castle (天 守 閣, tenshukaku) suffered irreparable damage, following an earthquake and a big storm. The estate administration was moved to the buildings below the castle. The tenshukaku, central and main element of the fortress, served as home to the lord, a place of refuge in case of attack and an observation point. This tower with seven floors turned to be a symbol of power.

In Kitsuki, the current three-story concrete building dates back to 1970. Most of the Japanese castles have been rebuilt, in some cases following the original techniques and materials (dressed stone seating, plastered wooden walls to protect fire, roof tiles glazed). Today, only a few Japanese castles remain in their original state, the best known being those of Himeji, Matsumoto, Matsue, Hikone or Inuyama, all five of Japan’s National Treasures.

Before reaching the main castle and enjoying the panorama of the bay and the city, strolling in the park below Kitsuki Castle is very pleasant, especially if the weather lends itself.

How to Get to Kitsuki Castle?

Kitsuki Castle is about a 10-minute walk from Kitsuki Bus Terminal. From Kitsuki Station about twenty minutes from Beppu via the JR Nippo Line is five kilometers outside the city itself. Municipal buses or taxis then make it possible to quickly reach the city center. By car, exit the highway at Kitsuki IC. Kitsuki is also close to Oita Airport (25-30 minutes by car).