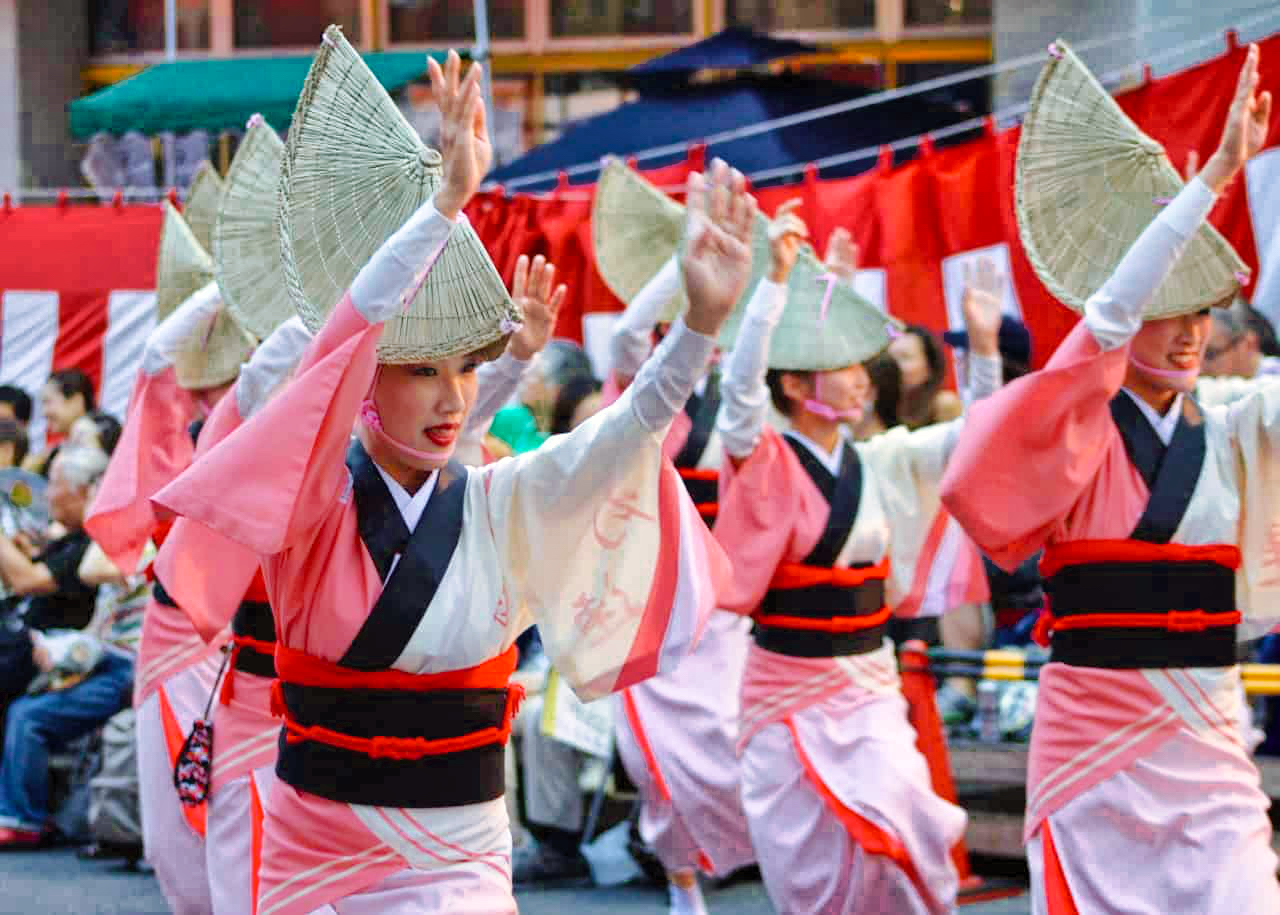 The Tokyo neighborhood of Koenji is known on most days for its trendy cafes, hipster live music venues, and its history as the birthplace of Japanese punk. But on the last Saturday and Sunday of August, the neighborhood is remade into a lively traditional dance festival called Koenji Awa Odori.

Nearly 1.2 million visitors from across Japan and abroad flock to the small streets surrounding the Koenji train station to watch the best traditional dance groups in Japan perform, admire elaborate kimono and Awa Odori garments, and take in the energy of one of Tokyo’s three largest festivals.

What is an Awa Odori?

Awa Odori (阿波おどり) is a dance that originated in Tokushima prefecture, a coastal area on the southeastern Japanese island of Shikoku. Over 400 years old, the dance is a summer celebration of fools. The translated lyrics go something like: “The dancers are fools/The spectators are fools/We’re both fools/So why not dance?” The dance groups are accompanied by traditional instruments as they perform, including taiko (太鼓 – drums), shinobue (篠笛 – bamboo flute), and shamisen (三味線 – three-string guitar).

Residents who migrated to Koenji in the 1950s brought this tradition with them, and the size of the Tokyo festival has been growing every year since. Currently, over 12,000 dancers perform over the course of the weekend.

The dance parade starts around five, but it’s best to arrive early and grab a spot alongside the parade route. JR Koenji Station is only a short fifteen-minute ride away from Shinjuku Station on the Chuo Line and maps of the parade are distributed as soon as you step out of the station, with English versions available. Many local spectators will bring a picnic and mats with them a few hours early to camp out on the main thoroughfare.

But for those who aren’t as punctual or if you’re looking to get up close to the groups, head straight for the end of the parade route. The parade will eventually make its way through these narrow streets, and the small quarters can get you as close as a foot away from the dancers and musicians. Seeing them make their final spirited push towards the parade’s end is a more intimate experience than watching with the large crowds on the main drag.

Food in a Japanese Festival

As with most Japanese matsuri (祭り – festival), food and drink are an essential part of the experience. So once you’ve taken in the sights and sounds of the parade, explore the small streets surrounding the parade route. You’ll find over one hundred food and drink vendors who’ve set up shop for the weekend.

Make sure to try matsuri classics like yakitori (焼き鳥 – skewered-grilled meat), yakisoba (焼きそば – stir-fried noodles), and kakigori (かき氷 – shaved ice). You may also stumble across specialty stalls selling grilled oysters or takoyaki (たこ焼き – octopus balls). Cold draft beer or ramune (ラムネ – Japanese soda) will wash down the food nicely on a humid August evening. Regardless of your taste, there’s plenty of variety to choose from.

This Japanese festival is held the last week of August in Koenji, located in the Suginami area in Tokyo. You can easily access to the area with the JR Chuo Line, close to Shinjuku, or the Tozai Line. You can check out the latest information here.

After the parade has ended, many of the dancers and musicians will join you in the bars and restaurants of Koenji, celebrating late into the night. Any trip to Tokyo in late August deserves an outing to Koenji Awa Odori. Be a part of the festivities!