Nishinomiya-go is but one of the Nadagogo – the five major areas of sake production in the prefecture of Hyogo. It won’t be hard to find a museum/brewery here; in fact, within a radius of just a few kilometres, you can find more sake breweries than you can count. On top of that, most of the associated companies host a wide variety of gift shops and cafes which turn this part of the city into a sake-lover’s heaven. Being completely unfamiliar with this territory, I entrusted a good friend, herself a Nishinomiya resident, to be my guide to the locations she had personally selected. 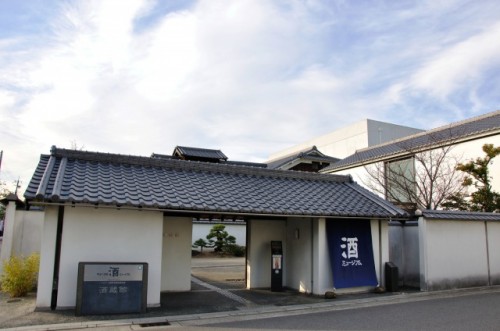 Our first stop was at Rent-a-cycle, where just 300 yen provided us with a bike for 24 hours. I would highly recommend cycling around as a choice of transportation; it’s cheap, relatively fast, and burning calories is a bonus too. Cycling down the area’s most well-known road Sakaguradori, (literally “sake brewery street”) it was a short ride to the first place on our list, the Hakutaka Rokusuien museum. 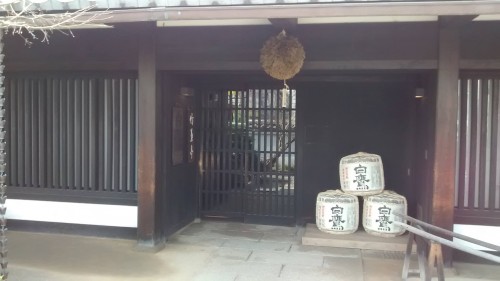 Walking past the elaborate gift shop and sake bar, both of which are stocked to the brim with sake bottles of every size, we changed into the provided slippers and ventured into the museum portion of the building.

This free museum not only gives you a good idea of the workings of a typical feudal Japan’s sake brewery, but also houses numerous other objects that paint a larger picture of life during this time period. These range from combs and pipes to elaborate traditional clothing.

Several reconstructed traditional Japanese rooms are found on the lower floor, and across the courtyard even more galleries are on display. In other rooms, you can find many of the tools and materials from the original brewery that have been successfully kept intact.

Next on the list and another brief bike ride away was the Hakushika Memorial Sake Museum.  Though there was an entry charge of 200 yen, this came with a complimentary 180ml bottle of sake. As far as I’m concerned, that makes it a free admission to this museum. 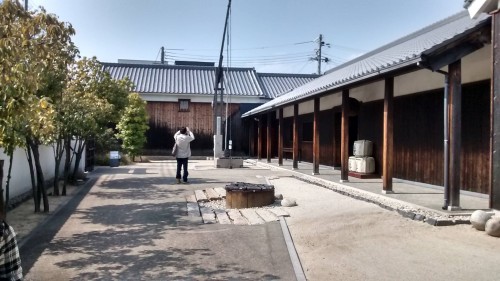 This museum provides an even more extensive look at the sake manufacturing process and the lives of its brewery workers during the company’s humble beginnings, with the remains of many parts of the original brewery still preserved. In addition to showcasing the vast selection of tools used, there’s also a reconstructed workers’ quarters giving a more humanizing look at life as a brewery employee.  I could only marvel at the gargantuan sake barrels that dwarfed even me in height. 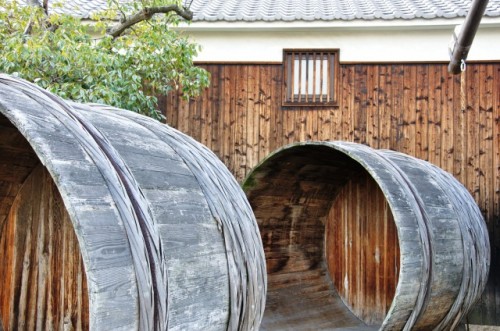 The museum regularly screens a video that describes just how much strength and teamwork was needed to operate the original brewing technology. Seeing the intense labour and harsh conditions that the brewery workers of long ago had to endure in order to satisfy the populations’ urge for inebriation gave me a new-found respect for the industry.

Our final destination for the day ended up being a café called Sekijuan, associated with the Ozeki brewing company. Needing a rest from museums at this point, we elected to explore the gift shop, where it seems that sake-anything can be bought. Sake shots were available for 100 yen, but I was more intrigued by the prospect of sparkling sake jelly. Purchasing a can, I discovered that while it was indeed tasty, I had to question the wisdom of putting jelly in aluminum cans as it made drinking a frustrating task.

Our tongues still not yet satisfied, it was time to reward ourselves after our exercise with some of the store’s special ice cream. I was morbidly curious about a flavour called sake-manju. But to my surprise, it not only did not taste like sake, it was mind-blowingly delicious.

(I should note that I took an appropriate amount of time before getting back on my bicycle after sake consumption. Do not drink and bike!)

At this point, our thirst for sake knowledge was still not quite quenched. But it was getting late, and the museum portions of the breweries were shutting down for the day. However, I knew that we had only scratched the surface of what Nishinomiya-go has to offer and that many more sake-related adventures await in the future.

Even for the more straight-laced crowd, a tour of Nishinomiya-go will still provide you with a rich cultural and historical experience without drinking a single drop. Sake is, after all, deeply ingrained in Japanese culture for good reason and it deserves to be appreciated regardless of personal taste.