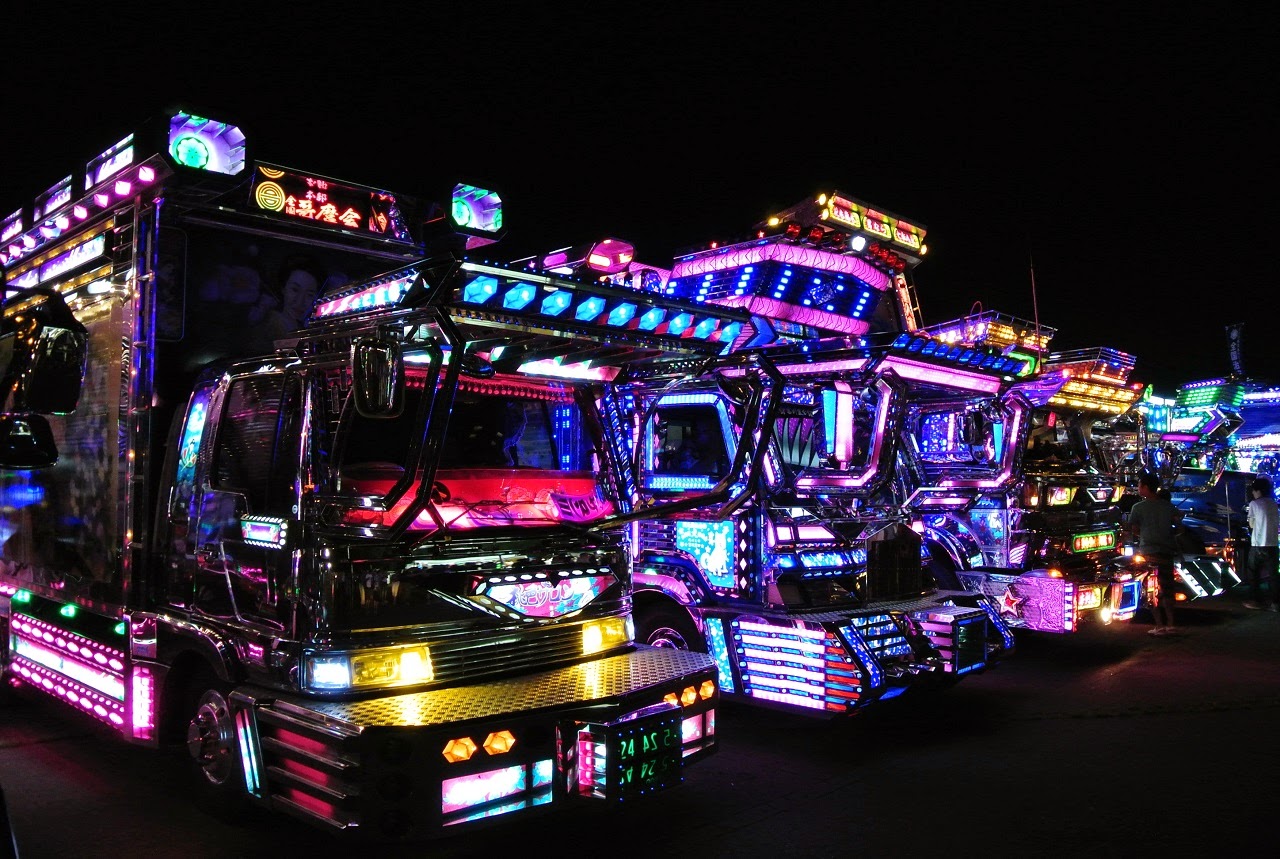 Throughout the world, you can find the most enthusiast fans of motorized vehicles:  cars, motor bikes and trucks for example. Sometimes the enthusiasm is directed at sports like racing, in other cases, they enjoy classic models more and are considered to be more like collectors. And some others have adopted the trend that move millions of dollars per year called car tuning (modifying the exterior, interior and even the mechanical components of any car until it is converted into a work of art on wheels). There are a lot of schools for this kind of hobby, depending of the country and the type of vehicle being tuned, but without a doubt, one of the most spectacular, colorful and particular variants, is the Japanese version of the tuned trucks: the Dekotora (a fusion of the English words decoration and truck). 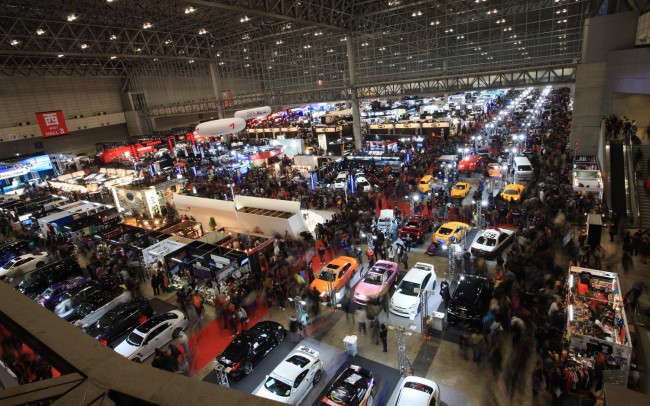 The History of Dekotora , Japanese Version of the Tuned Trucks

This phenomenon of Dekotora (which has become scarce due to economic matters and temporal trends) started in the ‘70s  when Japanese truck drivers started to modify their trucks by painting them with logos and special designs, but it quickly spread to adding new parts that helped with aerodynamics, neon color lights, among others. Around those years, a series of films captured the phenomenon and made it accessible to everybody. Such films called “Torakku Yaro” (the truck guys) had a heroic character driving a modified truck on Japanese routes and roads as its protagonist. 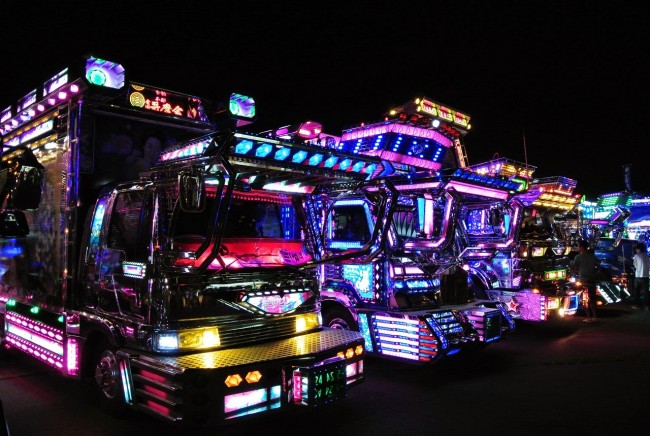 As years went by to this very moment, a lot of experimental Dekotora styles had been introduced by users in Japan. But the Kansai style, the Kanto style and the Retro style (more related to those first trucks from the ‘70s) were the ones that lasted longer. In the ‘90s, influenced by the success of mangas and animes related to robots (Gundam, Robotech and Mazinger Z) and their particular details regarding industrial design, shapes, colors and sharp and metallic looks, a new style called Gundam emerged, which actually keeps inspiring new models that sometimes appear in the scene. 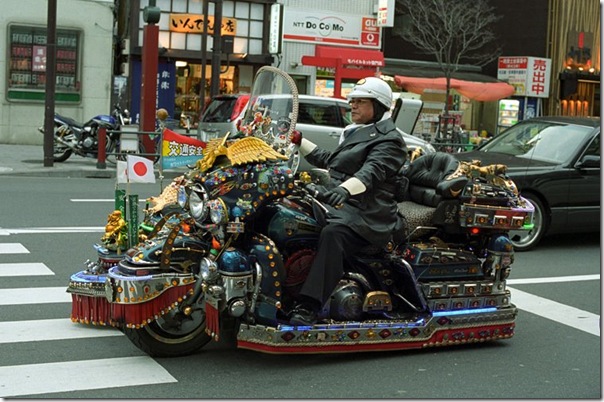 Most people in Japan enjoy the sight of Dekotora trucks when they see them passing by routes or roads; it is not very common to see them in the cities, although the ones I have seen have always been close to Tokyo or nearby. Their cabin interior have particular designs that tell a different story from the exterior of such trucks. Despite the decorations, they remain work trucks, so they have to be comfortable enough to provide a healthy work space for the driver. An aspect that quickly comes to mind when we see these trucks shapes and lights is wondering whether these vehicles have been approved by road authorities or just exhibition pieces. After the first years of their apparition, it was accorded that if you wanted to modify your truck, you had to get a rebuilding special license. With regards to strobe lights, they should be switched off during trips and on public streets. 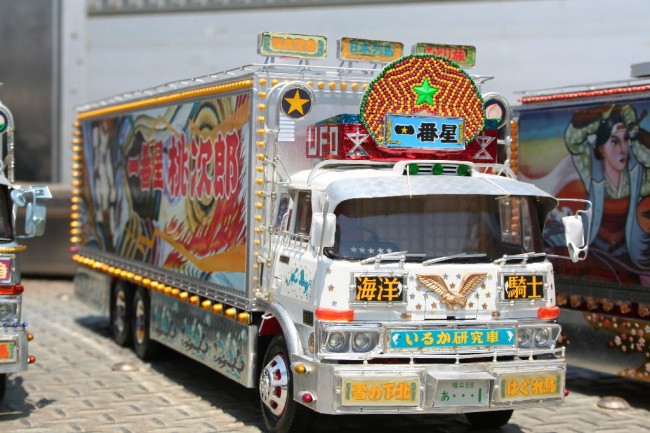 Young people and the ones who did not drive Dekotora trucks were influenced by this artistic movement as well. A lot of parallel styles started to appear, but the one that resembled Dekotora’s shapes and aesthetic suggestions the most was the Dekochari (tuned bikes, both motorcycles and bicycles).

While it is true, as mentioned before, the practice of Dekotora in Japan has been on the decline due to a number of reasons, the social aspect of the Dekotora is still alive and contributes to local communities. Dekotora clubs keep their users united, and they often hold reunions, annual contests and displays in order to raise funds for different charitable organizations. Despite not being as popular as before, they remain very present icons in the popular cultural imagery of Japanese society. This can be corroborated by the vast number of toys, radio controlled vehicles and assembled models related to these trucks. Moreover, in a lot of TV commercials, and in a lot of music and rock local bands, as well as international singers (such as Sean Paul in his “We Be Burning” video) use direct references in their videos and even Dekotora rows as stage background.

It is a shame that the Japanese government or some of these clubs lack the economic ability or interest in organizing an annual convention for these wonders on wheels, let alone a dedicated space for a museum or exposition center. When you walk on the Japanese streets or any of the most rural cities or areas, pay special attention in case you come across Dekotora trucks. If you are skilled with crafts and model building, the best souvenir related to these trucks are the assembly machines. I wish you a lot of luck and take a lot of pictures if you have the chance!