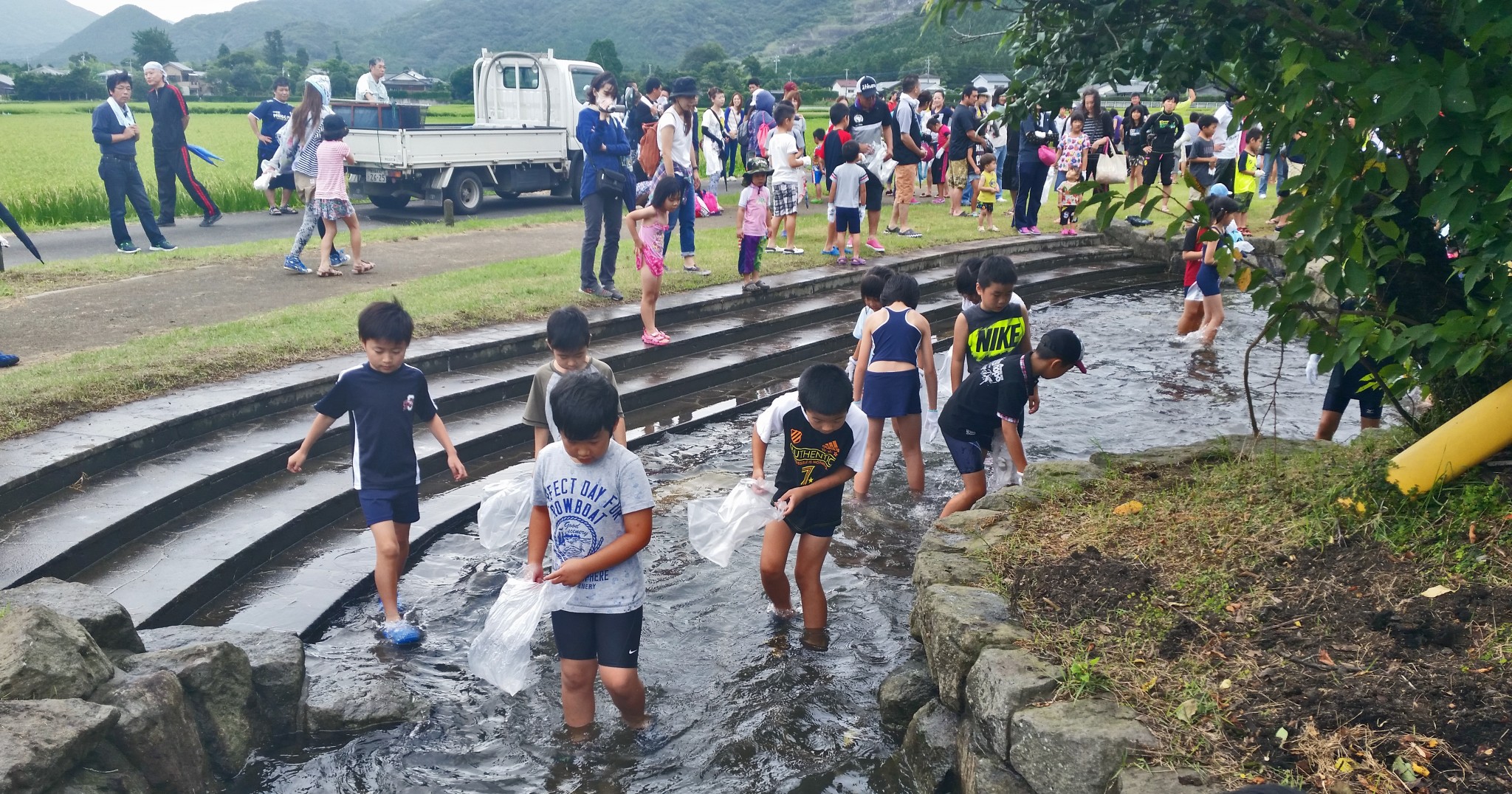 Catch all the fish at Kawakudari festival!

On my second day of exploring the exotic seaside city of Kagoshima, I was invited to a local summer festival called Kawakudari. It was the first time for me to take a part in a Japanese matsuri (festival) and I was truly excited about it. I really didn’t have any clear idea what to expect. I was told by my friend, whom I will call “S”, and his sister that this regional celebration marks the beginning of upcoming summer festival events. 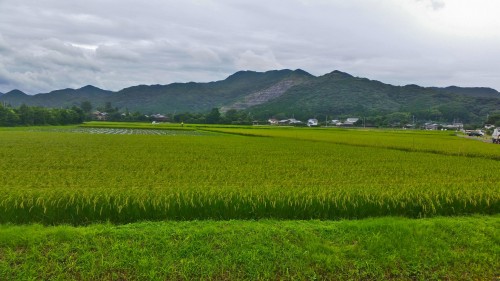 Kawakudari festival is a very local and family orientated day that occurs every July in Minamisatsuma town located in Kagoshima prefecture. All the families and kids gather together and welcome the summer through a series of fun and enjoyable plays. The event starts early morning and, unexpectedly, is sited by the bank of a small stream rich in clear waters. 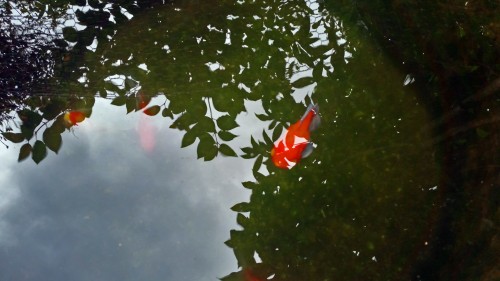 As the Japanese name suggests, Kawakudari is a festival celebrated by the river. Kawakudari can be translated as “going downstream (in a boat)” and nothing can be more accurate to describe this joyous festival that is all about riding the boat. The boats aren’t European style however as they are hand-made rafts made out of bamboo. 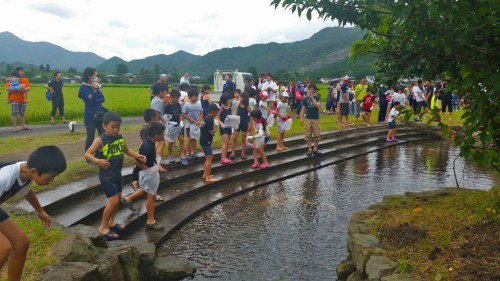 The whole event starts off with an exciting yet very difficult game designated for kids called “catching a fish”.  The task is simple; catch as many fish as you can using only your bare hands from a small shallow pond separated from the river. It may look easy at first glance but it’s harder than you think! I was offered to try it out and before I knew it, I already compromised myself by falling over the water. All the kids were extremely dexterous and I was amazed by their skills and determination! Some of them were even able to catch about 4 fishes! It was loads of great fun and I witnessed numerous, hilarious situations which still bring a big smile to my face. The caught fish were later on grilled and eaten during a barbecue party organized by the local community. 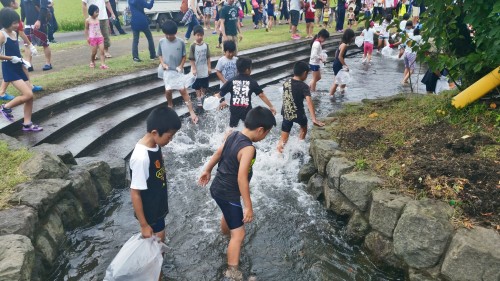 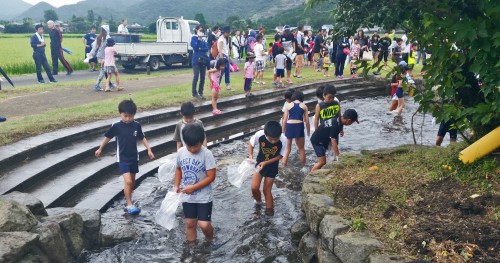 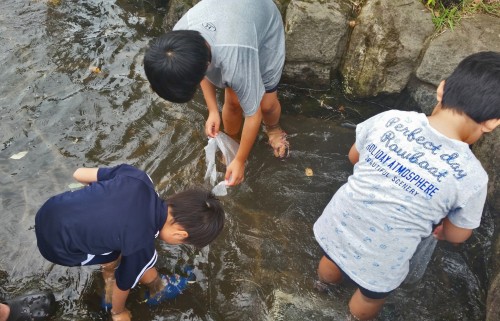 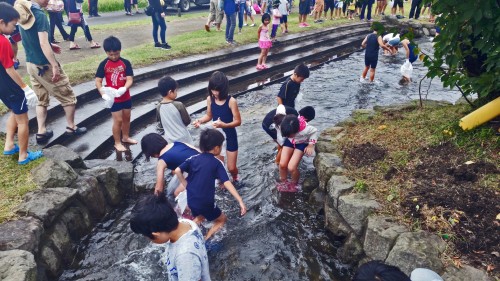 After the game comes the central focus of the Kawakudari festival, the river-boat ride. We moved to another place which was a starting point. Each bamboo raft could accommodate up to four kids and two adults and the rafts were extremely flat. There was no way you could avoid getting wet! 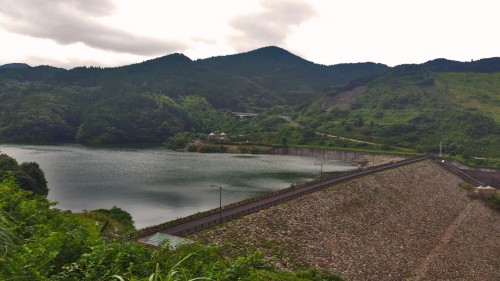 What appeared to be another game or race was actually a very pleasant river ride through the wild and beautiful nature, completely soaked in tranquility. Although kids were excited and quite loud I could hear the rustle of the wind and the voices of untamed nature. I have to say it was truly an immersive experience where I fell in love with Kagoshima and its natural habitat. 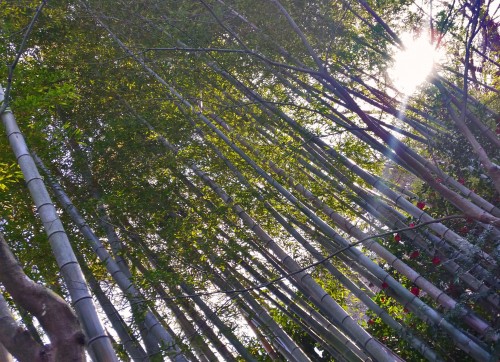 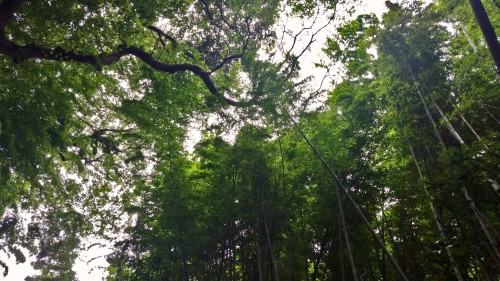 After the long yet peaceful boat ride we all met once again and welcomed summer by eating caught fish and drinking beer. The strong sense of one large family community was very surprising to me – something very rare in the big cities. My journey into Kagoshima customs, traditions and places has only just begun with the festival, but I already knew it would bring me more wonderful encounters and experiences.

The best way to get to Minamisatsuma town is to rent a car. Alternatively, take a bus from Kagoshima airport (鹿児島空港) to Minamisatsuma city. After getting off at Kinposhishomae (金峰支所) stop you can take a pleasant walk through beautiful rice fields directly to a primary school which is very closely located to the river where the Kawakudari  festival is held.