In 1891, a young man stood, perhaps on the very spot I now stood, and surveyed the beauty around him. It was a paradox of sorts, standing in the ruins of what was once a proud and majestic castle. Oka Castle was impregnable to its enemies for hundreds of years, but ironically vulnerable to the march of progress, when the Edo period came to an end and the administrators of the Meiji government demanded the majority of the remaining castles in Japan to be abandoned and often destroyed. By the time that young man, Rentarou Taki, stood on this site, Oka Castle had been gone for nearly two decades. 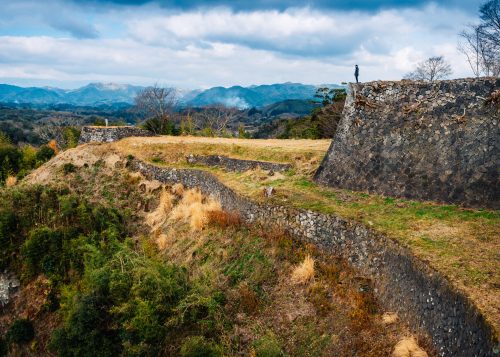 Taki had come to Taketa City by means of Tokyo and several other cities as his father held a government position requiring his family to move frequently around Japan. I can imagine the frequent moves made making new friends quite difficult for the boy, and he likely spent a lot of time alone. It was during these times in Taketa when Taki discovered the mystical world of the Oka Castle ruins. In his free time, Taki explored every centimeter of this place, in his imagination recreating the former glory of the Shiga and Nakagawa clans who once ruled the castle and protected the lands beyond its walls for over five centuries. 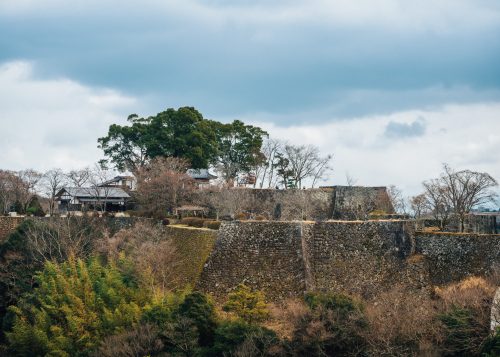 I imagine it was a Spring evening when Taki stood on the edge of one of the high stone walls, watching as the full moon rose over the blossoming cherry trees when a tune was planted in his heart. This tune would flow from his heart through his pen to become the haunting melody “Kojo no Tsuki”, Moon over the Castle Ruins, when he attended the music academy in Tokyo only a few years later. “Kojo no Tsuki” has become such a well known tune, it has been covered internationally by musicians as diverse as jazz musician Thelonious Monk and German rockers The Scorpions. 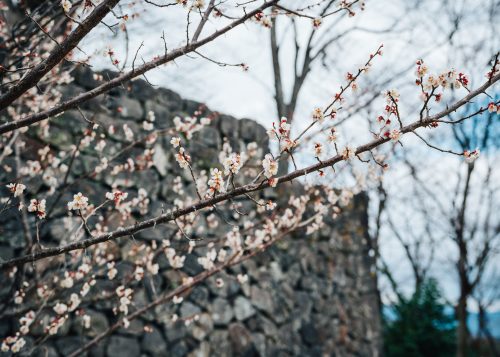 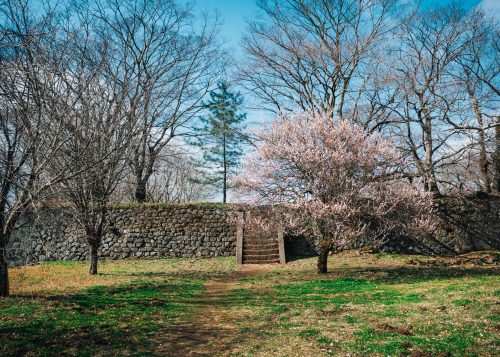 Over seven centuries before Taki came to this place, it was originally founded for legendary military commander Minamoto no Yoshitsune with a direction of Odata Koreyoshi. With a sweeping view of the surrounding countryside and sheer cliffs, it was a perfect location for a fortress. When it became the property of the Shiga clan in the 1300s, it was repaired, though it was not especially well built. Nonetheless, the Shiga clan repelled several attacks by the Shimazu clan over the more than 200 years they owned it. 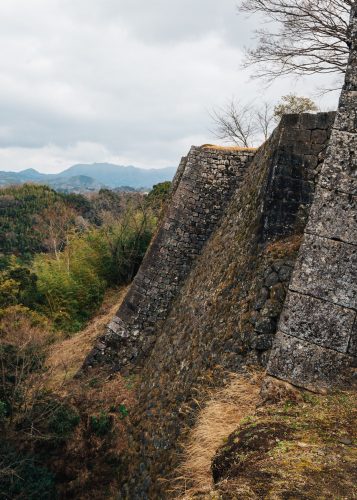 The Shiga clan were devout Christians, however, and when Christians fell under suspicion during the reign of Toyotomi Hideyoshi, the Shiga clan were stripped of their land ownership and the castle was turned over to the Nakagawa clan, under whose watch it would remain for 14 generations until the end of the Edo Period. It was under the Nakagawa clan that the castle really thrived, built up with huge stone walls and expanded with another keep and a palace at the request of Toyotomi. Oka Castle became an enormous and formidable fortress, but ironically saw little military action during the Edo era. In 1871, the new Meiji government ordered the castle decommissioned, which the faithful samurai did, no doubt with a tinge of sadness. By 1874, only the stone fortifications remained, and still remain, exactly as they were left. 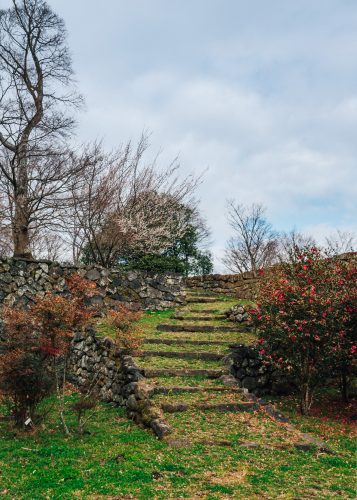 Today, you can wander the enormous grounds of the castle ruins much like Taki did. So much of the ruins remain undeveloped that you could literally step over the edge of a parapet to a tragic end if you weren’t paying attention. There are no distracting fences, railings or even warning signage to keep you from enjoying the grounds as they had been left almost 150 years ago, but for that reason, care must be taken that you don’t do anything foolish. 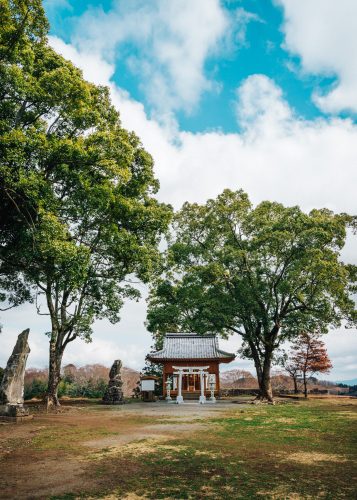 The lack of barriers means you can sit in solitude at the edge of the former castle, hearing nothing but the sound of the river running a hundred meters belows or the wind blowing through the old sakura trees that bloom here every Spring. You can peer down wells that contain the same waters that quenched the thirst of samurai lords for centuries. You can run your fingers over huge stones, some taller than yourself, that make up the kilometers of walls spread across the property. 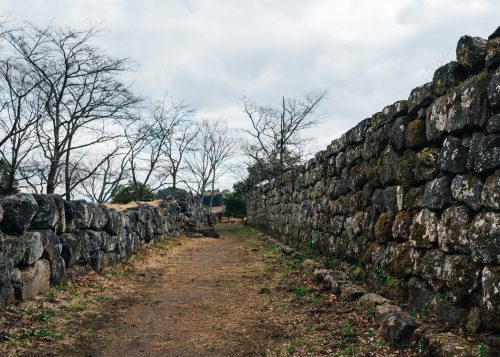 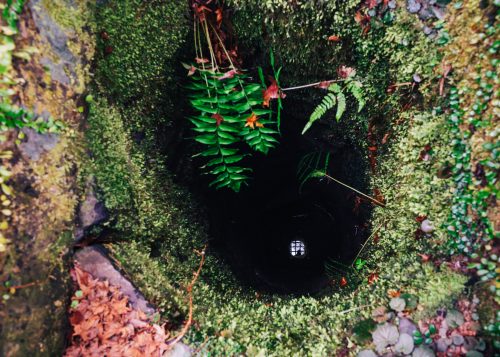 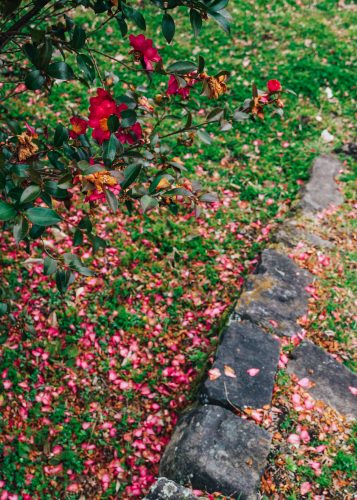 Near the Ninomaru ruins, a statue of young Taki sits, posed as if admiring the beauty of the scenery before him. Though he was a brilliant composer, admitted to the music academy at the age of 15, he died tragically at the age of 23 after contracting tuberculosis while studying overseas. Still, one can think of nowhere better Taki would like people to remember him, sharing his favorite views of and from Oka Castle where memories created in his childhood helped him immortalize the place in song. 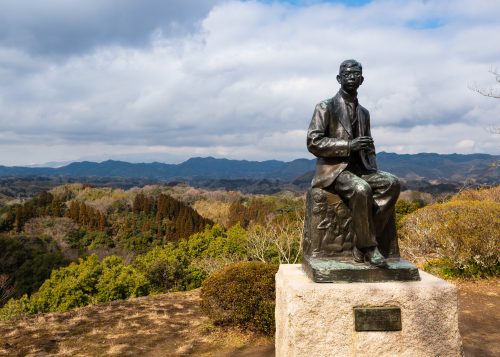 Getting To Oka Castle Ruins

The ruins of Oka Castle sit in the hills right outside Taketa city in Oita Prefecture. Taketa city can be reached most conveniently by rental car, though the local Hohi train line can be used to get you to Bungo-Taketa station, which is about a 25 minute walk from the ruins. An entire day could (and should) be spent exploring both the ruins and the historic castle town of Taketa which has many beautifully preserved buildings from the Edo era and a great deal of history related to the samurai clans and Japan’s hidden Christians of the 17th century.