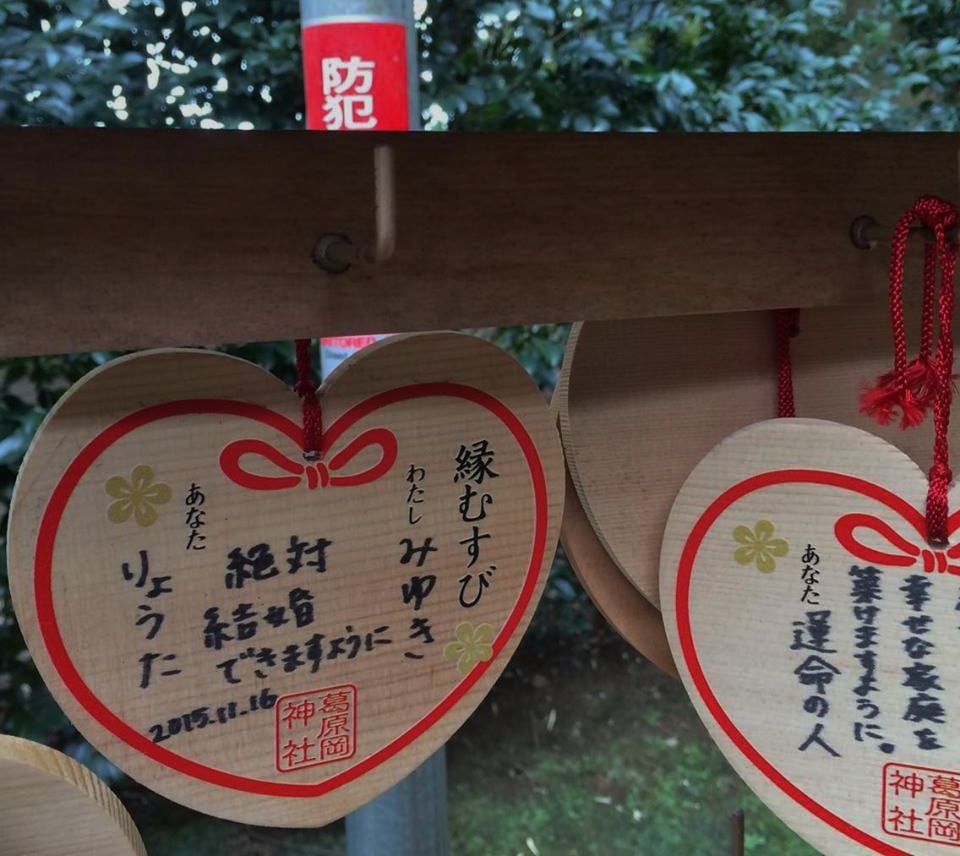 Love in the air at Kuzuharaoka shrine, Kamakura

Kuzuharaoka shrine is encircled by Genjiyama Park, a haunt alongside the Daibutsu hiking course. Many years ago, it was cut into this forest like the sweetly snipped bouquets presently placed atop tables just outside. Snipped, like the stalks of flowers – or the necks of traitors. 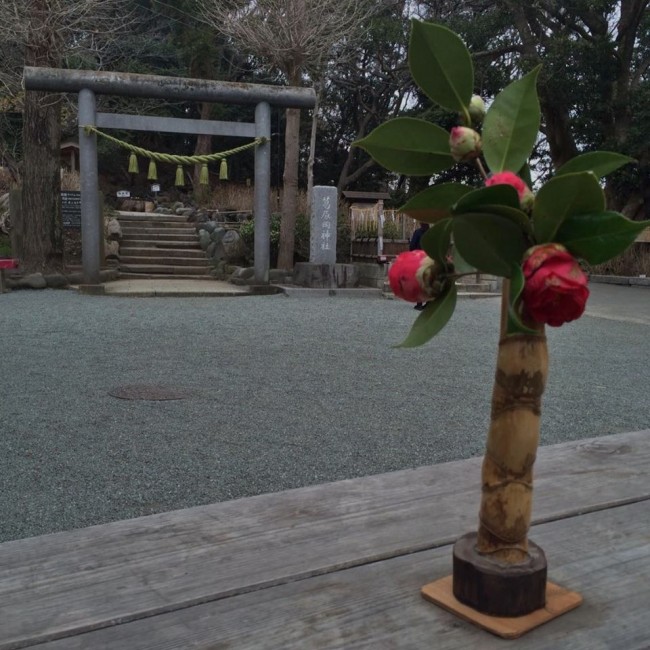 The Kamakura shrine was built upon the execution grounds for the coup conspirator Toshimoto Hino. Hino was twice accused of colluding with Emperor Go-Daigo to enlist warrior monks against the Kamakura shogun. In 1333, following his second conviction for treason, Hino was beheaded at this site crowning a hill. The blood commemorated at Kuzukaraoka is sanguine, but it is now visited for blood that flows saccharine.

At the hiking course’s side, the torii gateway before Kuzuharaoka stands a stony sentry. A shrine keeper within the adjacent souvenir shop stared out into me with an abject stare. Both belied the bosom-warming thoughts of love swimming about the place. 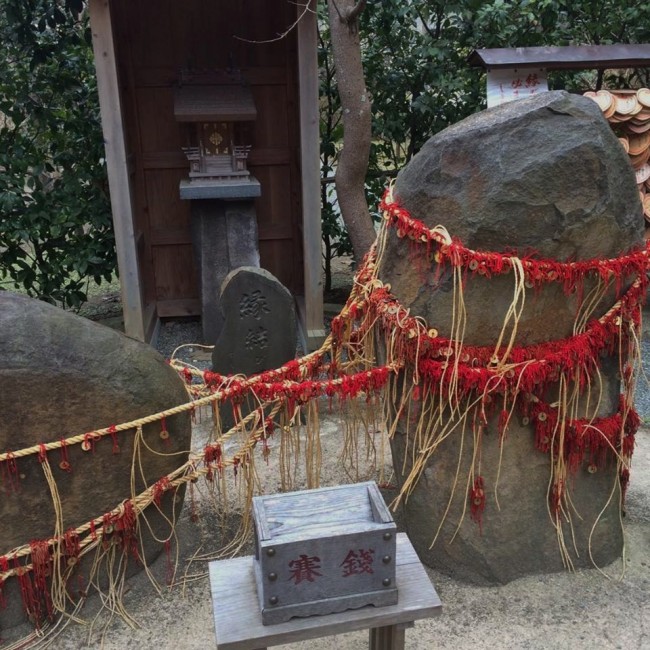 I entered stepping up a gentle grade of steps, while at my right a pool burbled. The pools sides were stone, like the druid arrangement of sitting stumps to my left. A lone visitor who preceded me hurried onward towards the shrine’s heart.

Cozied together with the path were structures breathing into each other. To one side were two age-worn jags that, old or not, leaned lovingly into one another. Red tassels ribboned them together, while an altar stood as an eternal marriage officiator behind them. 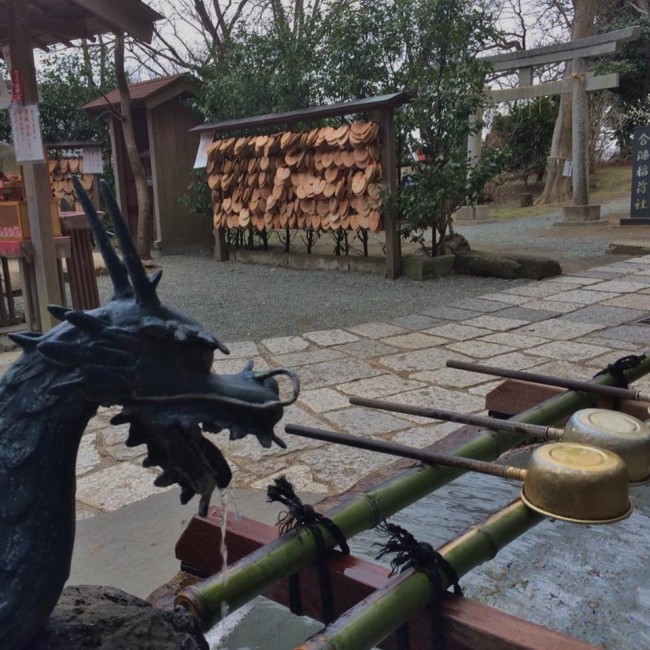 Cheek-to-cheek with the lodes of love was the temizuya fountain, where one cleanses oneself with water upon entering a shrine. It was as tell-tale a sign as the torii that this was a Shinto space. The spout was a dragon. His nostrils flared, while his spout poured out bellyfuls of passion.

Ahead was the lovely lane where severed heads of past feuds once laid. A man focused on a small shrine, where he bowed in some unspoken parting gesture. I followed the forest’s parted foliage through the shrine’s grounds.

The lane was a bed of rock rolling up towards Kuzuharaoka’s main shrine. The shrine itself pillowed the fluffy feelings feathering lovers’ lane against the bedpost forest timbers. The lone visitor who preceded me, arriving by taxi like a princess by palanquin, was now considering sweet nothings. 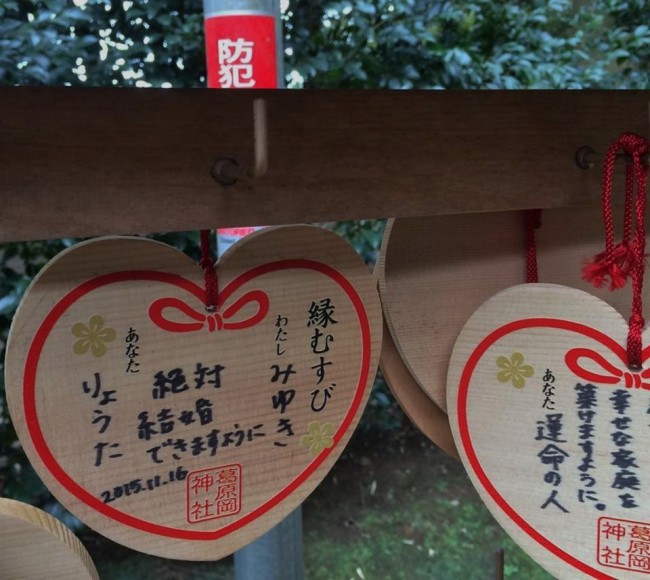 The shrine stood stilted and tectonic-bare. Its color was bare-body too, presenting itself truthfully to all those searching for love. It held a collection of heart-shaped ema (prayer tablets).

Leaving, the lone lady left ahead of me. I set eyes on the shrubs fringing Kuzuharaoka: an abundant green. Noting the distant cherry blossom trees, I knew that this lovers’ shrine bears seeds to fruit.

Access: From Kita-Kamakura station’s west exit, walk five minutes south.  On your right is the opening to Daibutsu hiking course. Continue for 30 minutes.