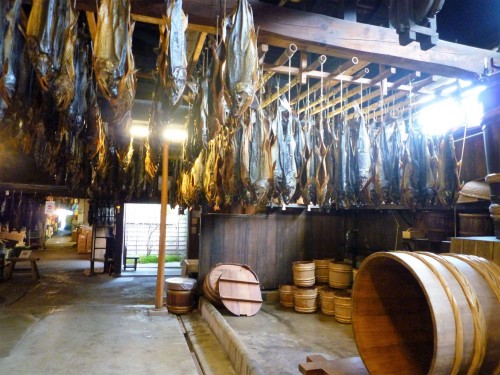 As far back as the samurai era, Murakami has been famous for its salmon. According to some scholars, it was during that time that the people of Murakami made an import discovery. They noticed a relationship between the wild salmon swimming upriver, and the fish returning to their birthplaces. The fish spawning along the city’s shores secured a steady flow of fish. Through this key discovery Murakami rose as a major commercial district, dedicated to capturing and selling salmon.

It wasn’t easy to find a good way to preserve the fish back in those days, since electric refrigerators didn’t exist yet. But the people of Murakami where resourceful, so they turned to drying their products in a tradition that still exists today. The fish is first gutted before being soaked in salt, then it is hung up to air-dry. This process occurs during the first days of the Winter season. The fish will remain that way until the following Fall, when the products are ready to be consumed and quickly replaced by a new seasons haul of fresh salmon. 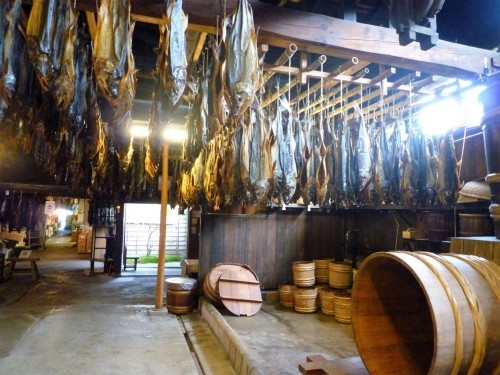 Kikkawa is one of the longest-running businesses in the city. The shop’s specialty is a thinly sliced, air-dried salmon. Customers can take a peak into the back room, where the salmon hangs from the wooden ceiling. If you visit Murakami during the folding screen festival that takes place in the city every Fall, you should also take a look at one of their tatami rooms. It is in this room that a special exhibition is held. I must also mention how friendly and attentive all of the store clerks were at all times! 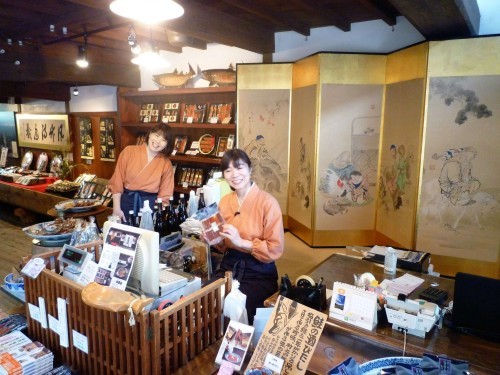 The real purpose of our visit to this store was to purchase some Sake wo sakebitashi. This specialty is made from thinly sliced dried salmon. 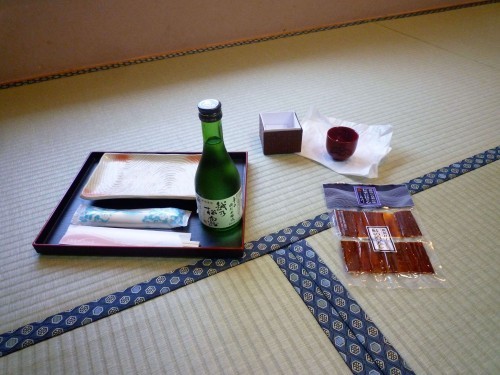 Moreover: once the salmon is completely dried and sliced, it is soaked in sake to make it softer as well as to boost the taste of the fish.  In fact, both the word ‘alcohol’ and the word ‘salmon’ are the same in Japanese, sake. Therefore the best way to eat this product is to serve it with sake, poured on a small lacquered wooden cup. This artistic technique is called tuishi which is also one of Murakami’s peculiarities.

Kosugi is a good store to shop for this kind of craft-work. Unfortunately, they were out of salmon-engraved cups so I had to choose among the remaining prints: pine tree, bamboo or plum tree. The classic ‘Three Friends of Winter’ (sho-chiku-bai). I selected the pine tree cup and after making a toast for good luck as the tale assures, Kanpai! 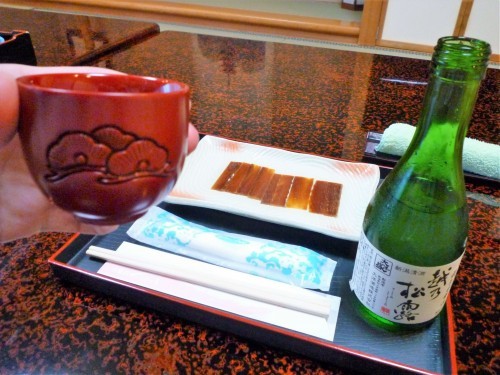 A Restaurant Which Dates Back to 1867

I was indeed lucky, because I randomly stumbled upon the impressive Shintaku restaurant on my walk through the city. Despite the large structure of the restaurant, it is very easy to overlook it. This is because it is located on a zigzagging street surrounded by striking Edo buildings. You will most likely be too busy staring at the architecture. But I implore, do not miss the chance to try the spectacular dishes Shintaku has to offer! 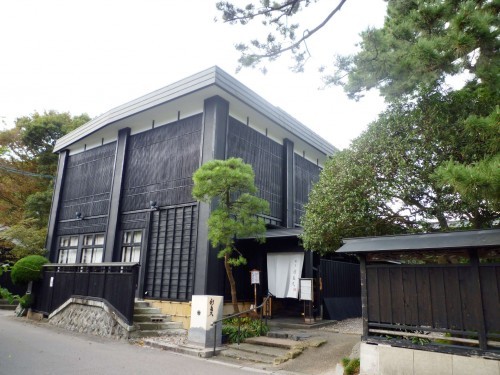 Before we even tried the food, the beautiful garden and remarkable interior had already taken our breath away. The colors and shapes of the restaurant are simply captivating. 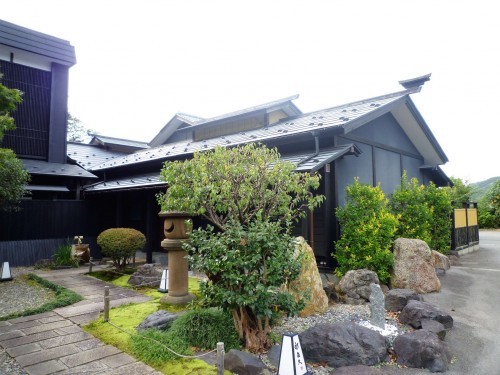 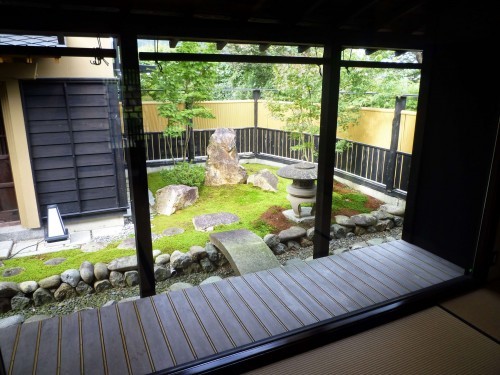 Delicate dishes marched along the bar as the chef seasoned the fish. There was even room for some chatting with the cook. The nakai (waitresses), dressed in traditional attire, livened up the afternoon with their friendliness. Clearly, cuisine is a lot more than just food, it’s a social event. But if there’s a strong, centenarian tradition behind it, such as in Shintaku, it’s also an art. 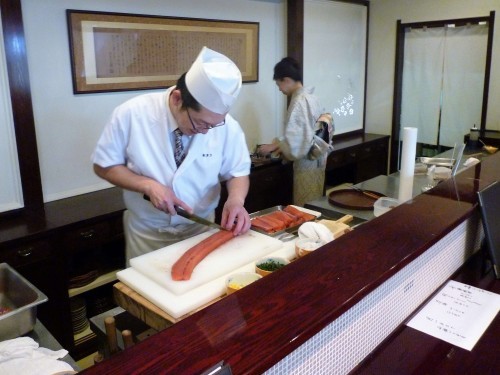 There are thousands of ways to prepare salmon, and almost all of them are put in practice here. Moreover, different ingredients are used in all the different seasons, so it would be great to come by all year-round to taste the new recipes. If only… 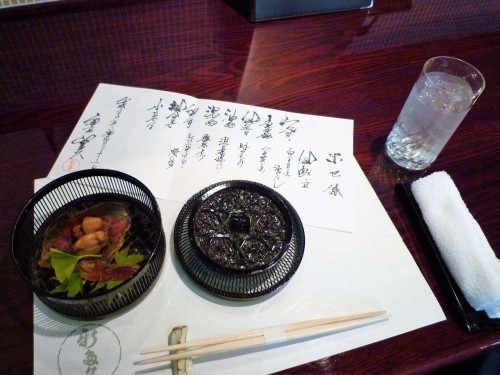 Slices of dried salmon, thin as paper we are told, are always offered as a snack before the meal is served. They must, in fact, be as thin as possible so as not to taste too salty. Fresh fish is also served in the restaurant, both boiled and grilled. The menu cannot be complete without some fish roe, guts and soup, perfect for a cold Fall afternoon. 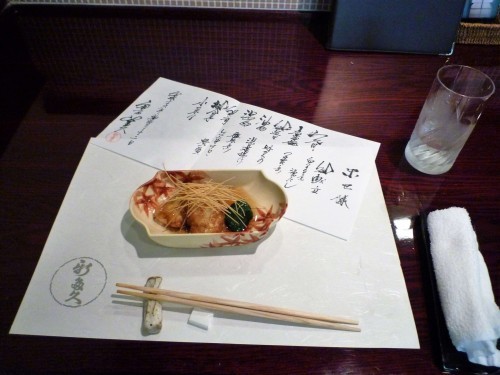 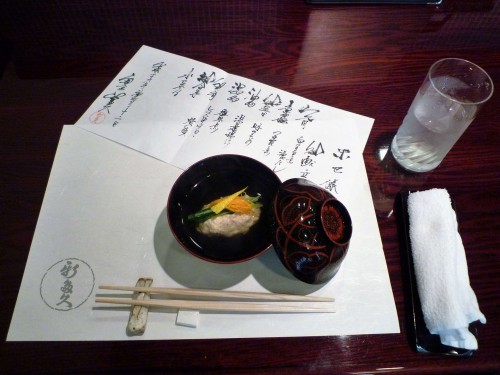 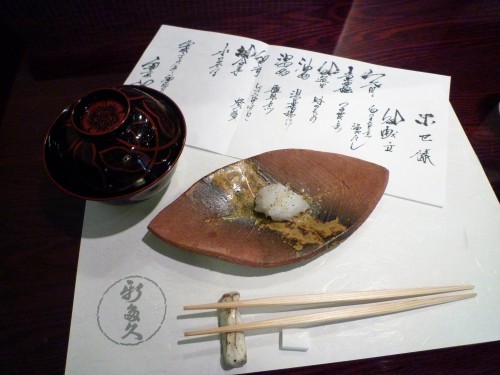 Time for some dessert—a delicate and fantastic pear sorbet. Before leaving, we took a look at the folding screens on display, which we will discuss in another article. I can’t wait to sit down at this restaurant again and try some new flavors in the future. Gochisousama deshita! 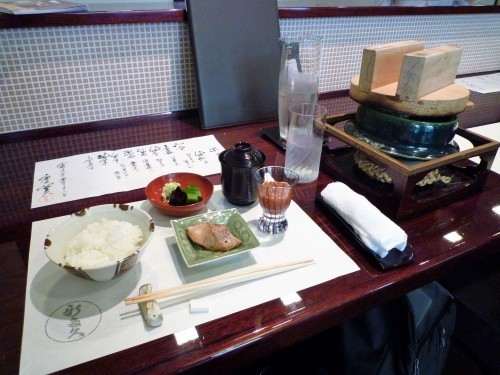