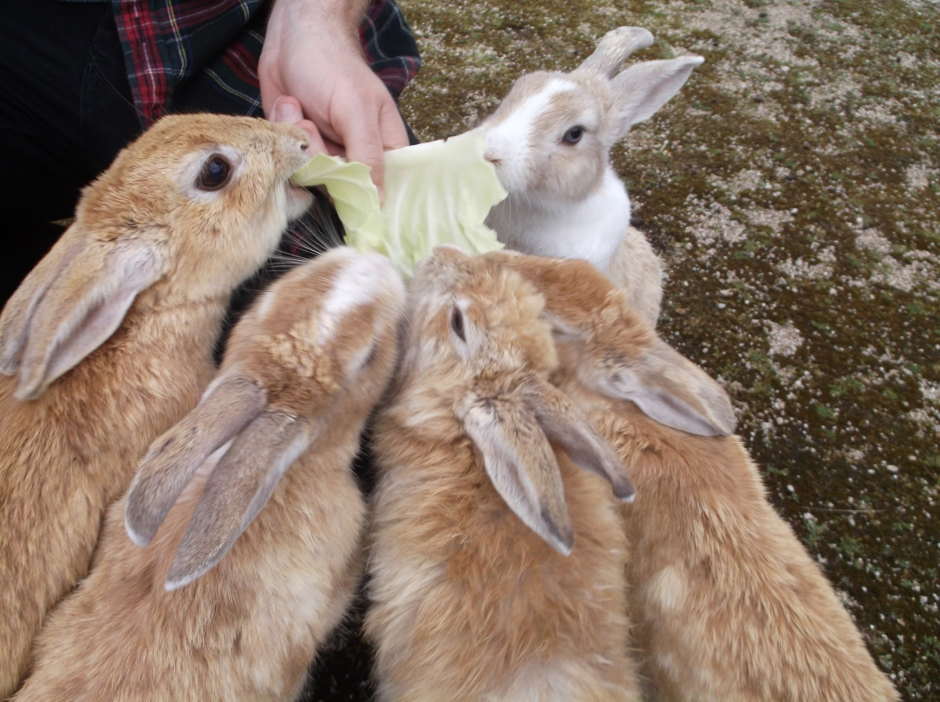 Like many people, one of the things on my check-list for my trip to Japan was to experience Japan’s renowned “quirkiness” in regards to animals. I had heard stories of a penguin that walks the street complete with a backpack for collecting fish from the market, as well as villages of foxes and cats. Cat cafes actually originated in Taiwan, but Japan pioneered the concept and it is now somewhat of a global sensation. Needless to say, I was ecstatic when my friend agreed to drive me to Okunoshima – also known as うさぎ島, Usagijima, or Rabbit Island. 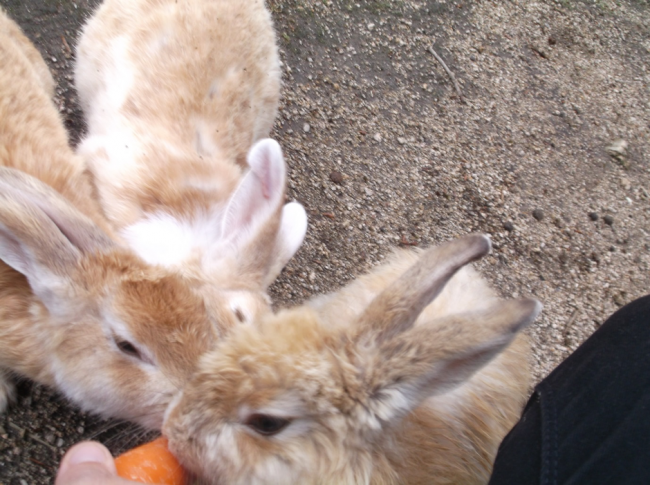 The journey to Okunoshima was a two-hour drive from Okayama Station. The island is located in the south-east of Hiroshima prefecture, and driving from Hiroshima Station to the island would be one hour at the shortest. From Hiroshima Station you can also take a two-hour local-train journey for 1320 yen, or a one-hour journey by taking the Shinkansen to Mihara, then changing lines at Tadano-Umi Station, for a total of 3740 yen. Driving was a great experience; we put on the “Road to Rabbit Island” mix-CD I made for the occasion, and sped from Okayama to Okunoshima via Tomonoura. Though this was not the most direct route by any means, the road ran alongside the coast, offering some great views even through sporadic port-town cloudbursts. The view looked very familiar, and I jokingly pointed to sea and said “Look, it’s Ponyo!” My humour was lost on my Japanese counter-part, who saw no sign of Ponyo, but I later found out that Tomonoura is indeed the setting of the Studio Ghibli movie. 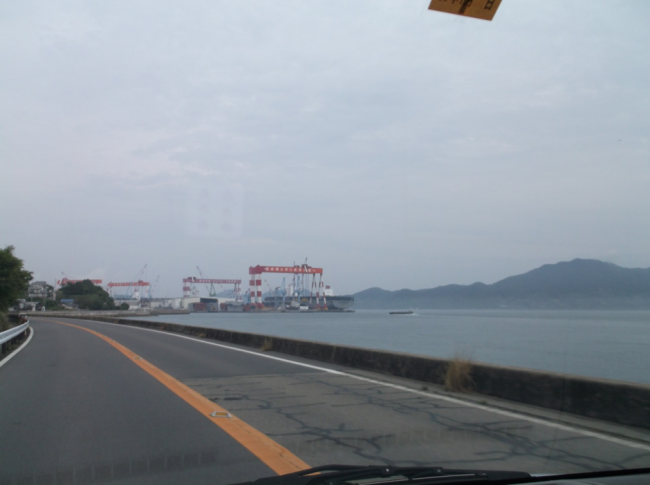 Going by car also gave us the chance to pull over and grab some snacks of cabbage and carrots. Not for us, but for our soon-to-be rabbit buddies. We later found that you can buy some rabbit-feed closer to the island, but this was our budget version. We arrived at the dock near Tadano-Umi Station, and it did not look very touristy. Rather, it looked quite weather-worn and somewhat industrial. The ferry was preparing to leave as a bus-load of school children clambered on-board. Inside the ticket booth across the road from the dock, we asked if we could take the car onto the ferry. We could, but there would be a free bus on the island that takes its passengers straight to a hotel. Instead we opted to park the car, buy two tickets at 300 yen a head, and make a dash across the road, getting on board just in time before departure.

The ferry set into the mists of the inland sea, and we sat inside to avoid the weather, where we were treated to a poster that read “Do not leave your pet rabbit in island. Pet rabbit cannot live in nature.” The broken English conjured images of families wanting to return their pets to the wild, adding to my building excitement for an island purely for rabbits. 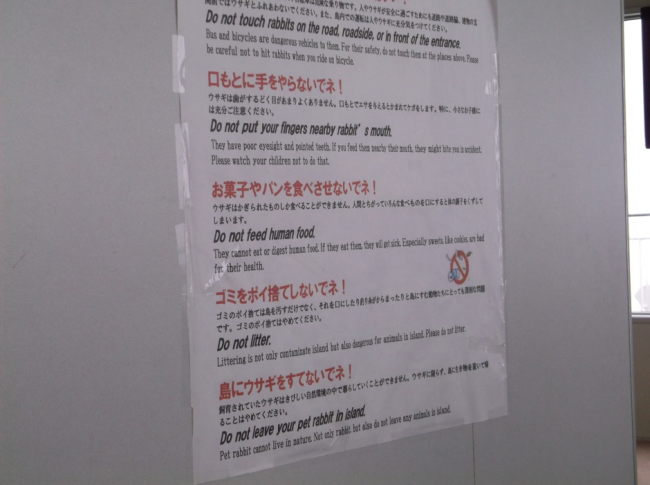 Soon Rabbit Island broke through the mist, and we docked. Almost instantly, I caught glimpse of a rabbit chasing a couple for the last bit of food. That is right – these rabbits will run up to pretty much anyone they see, as they associate people with food so strongly. To me, it seemed these ravenous rabbits were one step away from being hunters of cabbage-bearing tourists. We took the bus and on the short journey deeper into Okunoshima I saw a small building: a poison gas museum. I later discovered that the island was home to a poison gas factory built in the late 1920s, after Japan had heard that other countries were working on chemical warfare. In fact, that is indirectly why the island is filled with bunnies. After the war, the government wanted to be rid of the past and so Ōkunoshima was given a healthy injection of rabbits, a six-hole golf course, a hotel, and camping grounds. Thus, Rabbit Island was born. 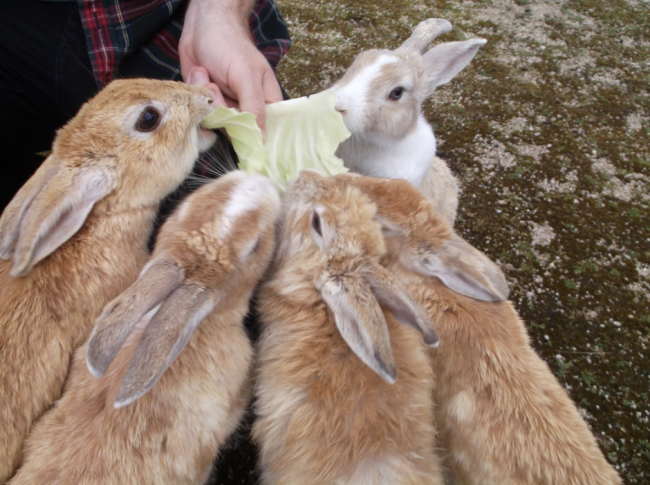 We were dropped near the large hotel, which sits opposite a vast clearing where about eighty rabbits were chasing the school students for food. Most rabbits were preoccupied with the school-kids, but we soon found a park bench and half a dozen bunnies. We put our bags on the table and began feeding the rabbits. There is a strange, wonderful feeling that is unique to feeding six rabbits at once, watching their little faces munch away at carrots. We soon realised that the table was not a safe spot for the vegetables, as bunnies were riffling through our belongings. We lured them away, being sure not to simply pick up the rabbits, as the aforementioned sign on the ferry said not to pick them up for fear of harming them or causing stress if handled improperly.
We took a break to eat our own lunch, of which the rabbits also wanted to eat. Sadly, we could not share, but had plenty more vegetables to give, and I tested my theory about the rabbits’ hunting capabilities by throwing some carrot for them to chase. Needless to say, rabbits cannot hunt carrots. 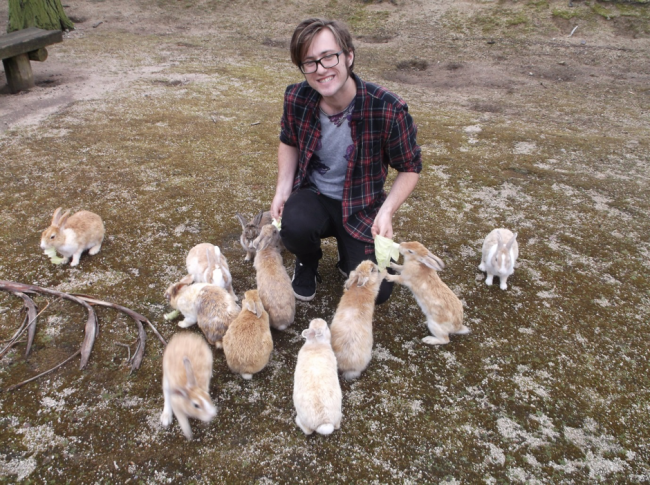 The rabbits in Okunoshima are all very cute as you would imagine, but it is clear that some get bullied – as is the way of the wild – and because of this, some do look a little worse for wear. It seemed that the white rabbits were lowest in the hierarchy, most likely due to their fragile skin. Some rabbits showed dominance by charging, jumping, or even boxing the other rabbits away. The rabbits are more than happy to climb all over you for the food too, which is delightful, but a little strange. It was sad when the vegetables ran out and all I could do was watch as other people fed the bunnies. But I guess all things must pass, and the ephemeral nature of Okunoshima only lasting as long as the vegetables you bring keeps the experience special. Without a doubt in my mind, I will return to Rabbit Island with even more vegetables – I have to see if they can learn to hunt! 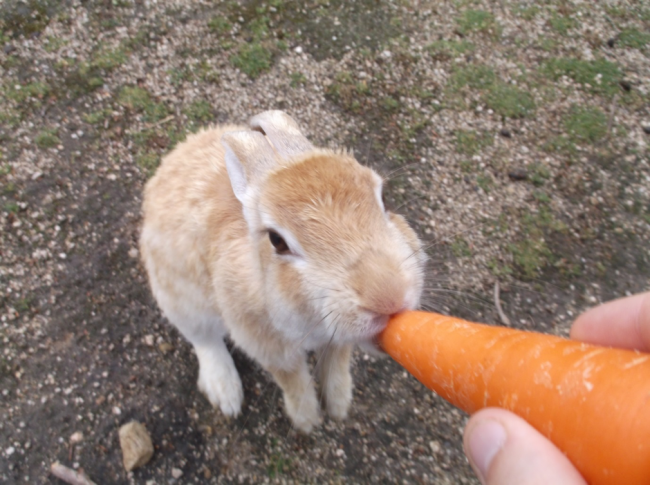