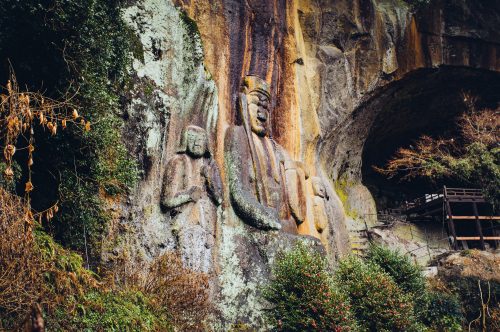 This includes one of my destinations: Fukoji Temple in Bungo-ono which hosts some of the largest magaibutsu carvings in all of Japan.

I started my visit to this temple from Oita City with a rental car I picked up in a shop right next to Oita Station. Driving in rural Japan is far less intimidating than many tourists believe and I would highly encourage those who have trouble walking long distances to consider traveling by car.

This was especially true as I drove out of Oita City and immediately transitioned to the countryside of Oita Prefecture.  The country roads here are a joy to drive on as they have very little traffic and wind through acres and acres of open farmland. Pocket wifi has also made navigation easier than ever since Google Maps works very well virtually anywhere in Japan. 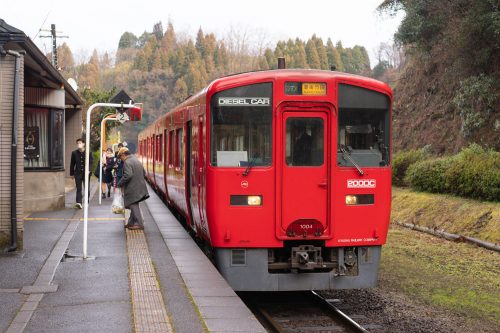 I stopped by Asaji Station, the nearest train station to Fukoji Temple as this is where people who visit Fukoji Temple by train will need to get off at.  The trains that run along the Hohi Main Line are tiny red trains that are usually no more than 2-3 cars long.  There are also no staff manning the ticket booth here; instead there is simply a box and automated machine where people buy and place their tickets via a system that relies on the honor system. This line is used mainly by local students and elderly citizens and is quite the change from the trains full of business workers in the big cities. 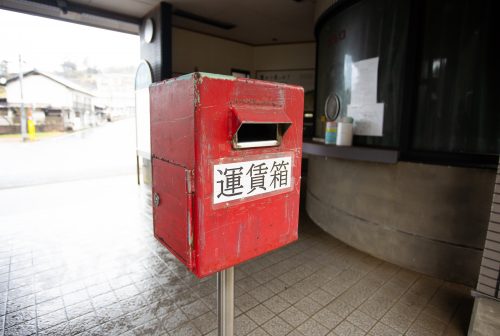 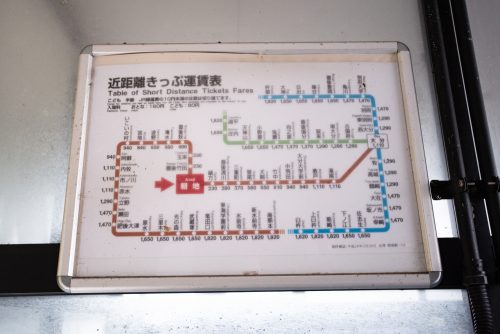 There was a welcome sign at this station that I particularly liked.  The people of Asaji consider the abundance of nature and their traditions to be the wealth of their community.  This slower pace of life is a welcome change after spending time in the larger cities and tourist spots, and I was looking to forward to venturing into the nature of this region. 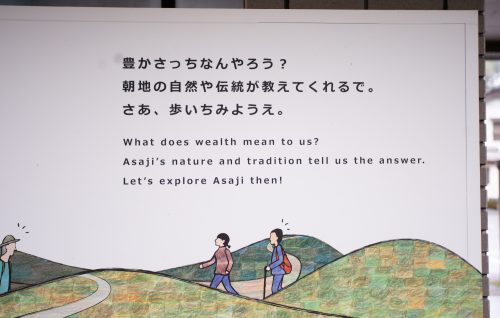 The walk to Fukokoji Temple from this station is approximately 3.5 kilometers and will take about 45 minutes.  There is free wifi at the station so you can map out your route on your navigation app if you haven’t already. You may also opt for a 15 minute taxi ride. 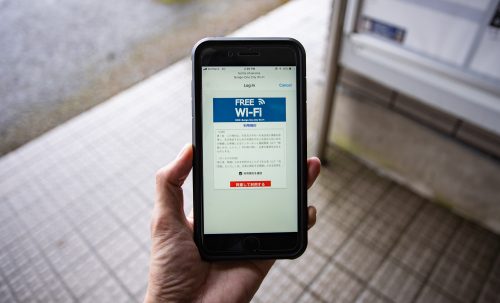 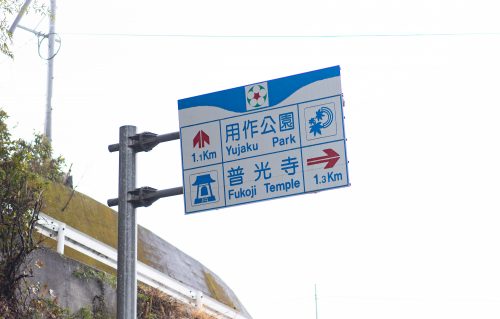 Driving through small villages and winding through the rolling hills and forests of Asaji was one of my favorite parts of the day.  The forests here are a mix of cedar and bamboo and the rain that day made for a mysteriously beautiful scene as fog shrouded the forests.  The unusually warm weather this winter had also caused the plum trees to begin blossoming which was another beautiful sight as I neared Fukoji Temple. 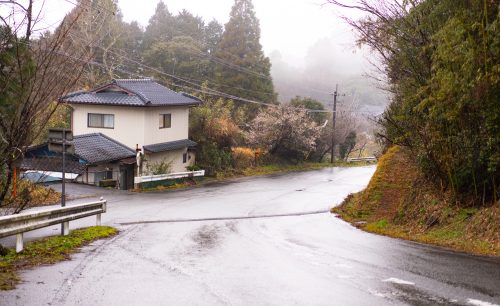 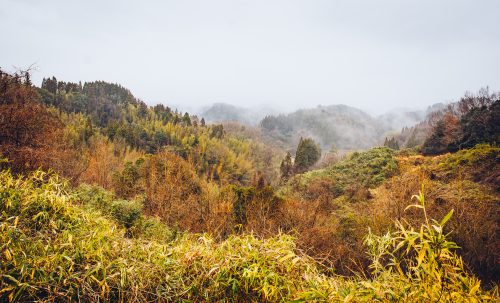 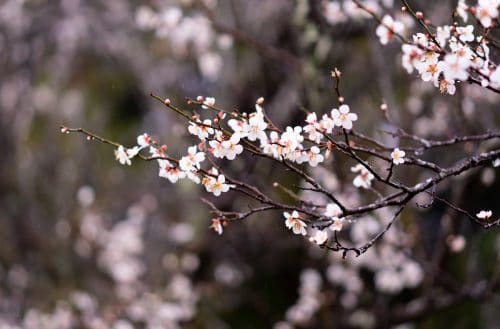 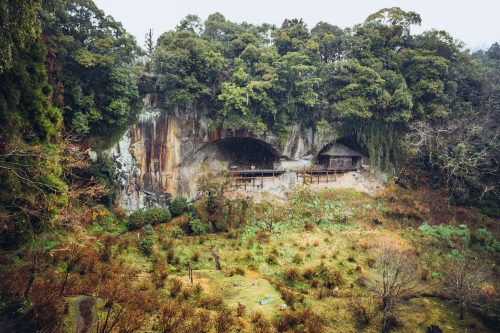 I arrived at Fukoji Temple about 20 minutes after departing from Asaji Station and was immediately in awe at the sight  across the valley from the temple.  The cliff face here contained two shallow caves and three massive magaibutsu buddha carvings to the left of them.  The largest of these statues is named Fudo-myoo in the middle with Kongara-doji to the right and Seitaka-doji to the left.

These statues were carved from a stone called tuff that is easy to manipulate but susceptible to erosion from the elements.  The faces of these buddha originally had fierce angry expressions, but hundreds of years of exposure to the elements has since rounded them out into gentle and peaceful smiles. 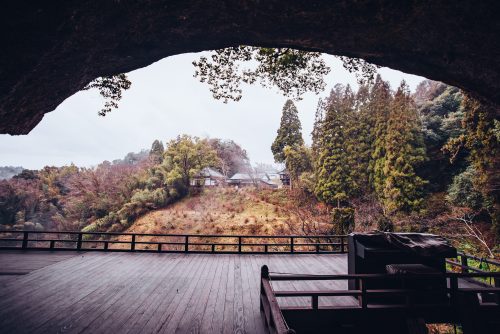 You can chose to admire them from afar from Fukoji Temple, but there is also a path down into the valley and up into the caves themselves.  This walk was not very far and after seeing just how beautiful these statues and caves were I had to take a closer look.  During my visit, there were periodic rain showers that made my visit a bit challenging.  However, upon reaching the caves I was very happy to see that they offered shelter from the rain and a beautiful view of the valley and temple.  Looking out, the only sound I could hear was the rain falling in the forests and the grassy fields below.

There were dozens of buddhist statues lined up against the back of the cave here with moss and small plants growing on them.  A small shrine building also lay at the back of the other cave with a wooden platform connecting both of these caves. 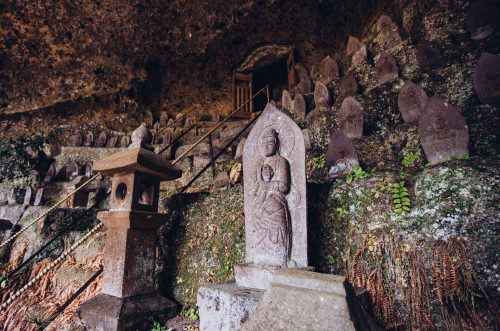 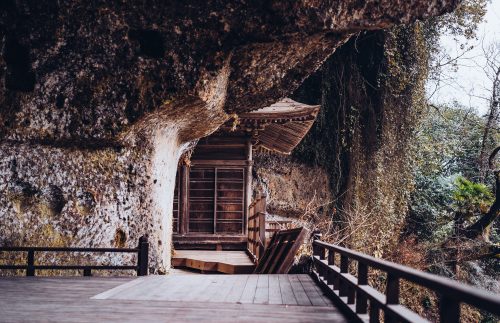 I also explored the path along the cave and found a third shallow cave with a small shrine to the left of the magaibutsu.   The walls of this cave also had tiny holes with even smaller buddha taking shelter inside of them. 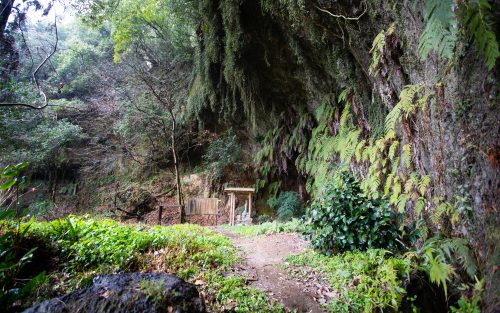 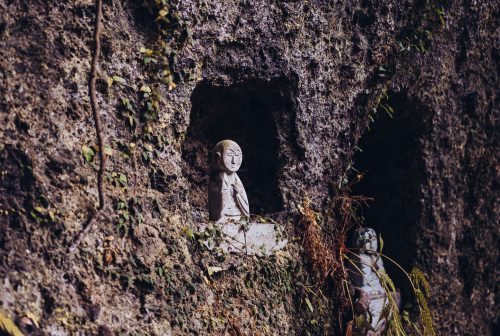 Fukoji Temple can be reached from Asaji Station with a brisk 40-50 minute walk through the countryside and small villages or via a 15 minute taxi ride.  This location is free to visit and open year round.

To those who choose to travel here by rental car, there is a parking lot next to the temple which is also free to use.

You may also use the free wifi at Asaji Station to map out your walking or driving route on your navigation app.